The world’s largest grid-scale solar battery, with a potential capacity of 1200 megawatts – about eight times the size of the South Australian big battery – is to be built in the NSW Hunter Valley at Kurri Kurri, 35 kilometres north-west of Newcastle.

The project is being developed by CEP Energy, which is sourcing its power from factory and warehouse rooftops around the country, many of which are owned by the property giant Pelligra which has 10 million square metres of rooftop space. 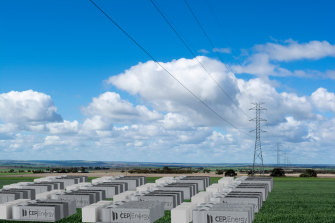 An artist’s impression of CEP Energy’s planned mega battery (1200MW) to be developed at Kurri Kurri in the Hunter Valley.

Morris Iemma, the former NSW Labor premier who is now chairman of CEP Energy, said that Australia leads the world in the uptake of solar on homes, but is far behind in commercial solar. The deal between CEP Energy and Pelligra shows how much potential there is to build grid-scale solar around cities where power is needed most and where grid connections already exist by using industrial and commercial roof space, he said.

The announcement of the Kurri Kurri battery is also evidence that the NSW government policies supporting renewable energy were working, said Mr Iemma.

Last year the NSW government created so-called Renewable Energy Zones, districts in which large scale renewable energy projects would be supported and fast-tracked. The CEP battery will be inside the Hunter Economic Zone.

“Big batteries, including the one planned by CEP Energy for the Hunter, will play a major role in filling the gaps left by the gradual retirement of coal and gas-fired generation assets, including the nearby Liddell Power Station,” Mr Iemma said.

He said the NSW government’s clean energy policies had provided the market with the confidence to invest in renewable generation supported by large battery storage.

“This project will help ensure the Hunter region of NSW remains true to its heritage as one of the nation’s energy powerhouses as we work towards a cleaner, decarbonised future.”

“It is among the best handful of sites in Australia for reliable and efficient grid connection,” Mr Wright said.

With its network of solar farms and batteries CEP Energy plans to sell cheap energy directly to industrial users and the excess to the grid. The Hunter Valley battery should be completed by 2023.

Also on Thursday the state government announced it had approved the construction of Australia’s first hydro-powered battery in Albury.

Planning Minister Rob Stokes said the $32 million battery will be powered by the Hume Hydro Power Station and will be able to dispatch energy to the grid during periods of peak demand, boosting energy security.

Construction is expected to start this year.

Our Morning Edition newsletter is a curated guide to the most important and interesting stories, analysis and insights. Sign up to The Sydney Morning Herald’s newsletter here, The Age’s here, Brisbane Times’ here, and WAtoday’s here.