Home » World News » When it comes to words, we don't have to follow the letter of the law

Why a rogue apostrophe isn’t such a catastrophe: As a study finds social media is killing off good punctuation, Countdown’s dictionary demon SUSIE DENT dares to say when it comes to words, we don’t have to follow the letter of the law

English punctuation is going to the dog’s. Or perhaps I mean it has already gone to the dogs’ . . .

Pardon my apostrophes. Readers who care about these things will know that I ought to say punctuation is going to the dogs. Four letters and not an apostrophe in sight.

If I were to talk about a dog’s dinner, however, I’d use an apostrophe to indicate that the dinner belongs to the dog. It’s all a bit of a minefield, which is why perhaps, according to a report from Lancaster University this week, the apostrophe may be dying out altogether.

The trend is largely down to social media, where speed and space are everything. Why say ‘you’re’ when you can speed-type ‘youre’ or — worse — ‘your’? And why bother with the complicated rules for possessive apostrophes, which differentiate between singular and plural nouns, when you can just ignore them altogether? 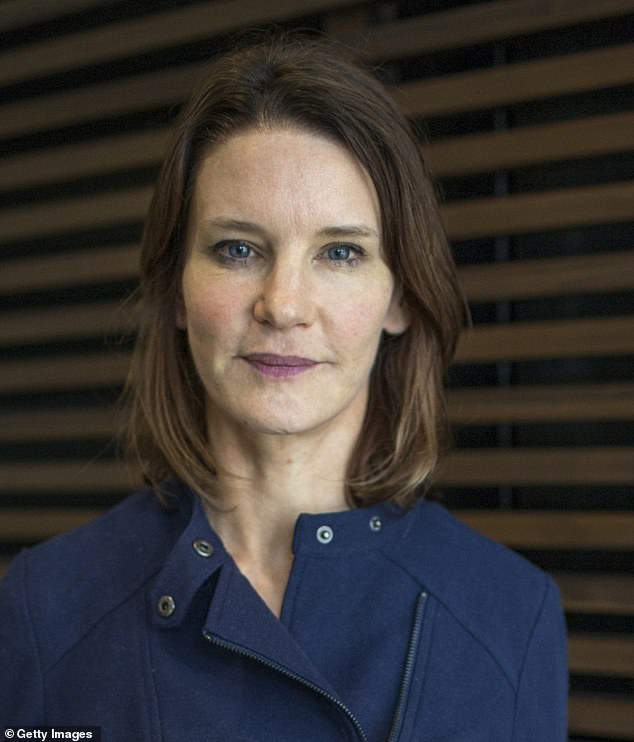 Pardon my apostrophes. Readers who care about these things will know that I ought to say punctuation is going to the dogs. Four letters and not an apostrophe in sight, writes Susie Dent

Is it elephants’ trunks, elephant’s trunks, or elephants trunks? Too late, you’ve already pressed ‘send’. (The answer, should you need it, is the first.) We are all speaking with our fingers, hammering out messages at speed on our touch screens, replicating the informality of speech.

The researchers examined a database of 100 million words drawn from the past 30 years, and its results clearly show the ways our language is evolving. It discovered, for example, an 8 per cent decrease in the use of an apostrophe after a ‘possessive plural’ noun compared with the early 1990s.

It’s a tricky rule to master, but it can make a serious difference, as an estate agent named Anthony Zadravic in Australia found out to his cost last month. Mr Zadravic posted a sarcastic comment on Facebook, accusing a former employer of failing to pay him money owed under a pension agreement.

‘Selling multi million $ homes in Pearl Beach but can’t pay his employees superannuation,’ wrote a disgruntled Mr Zadravic. His former boss filed a claim for defamation because of the missing apostrophe in the word ‘employees’. 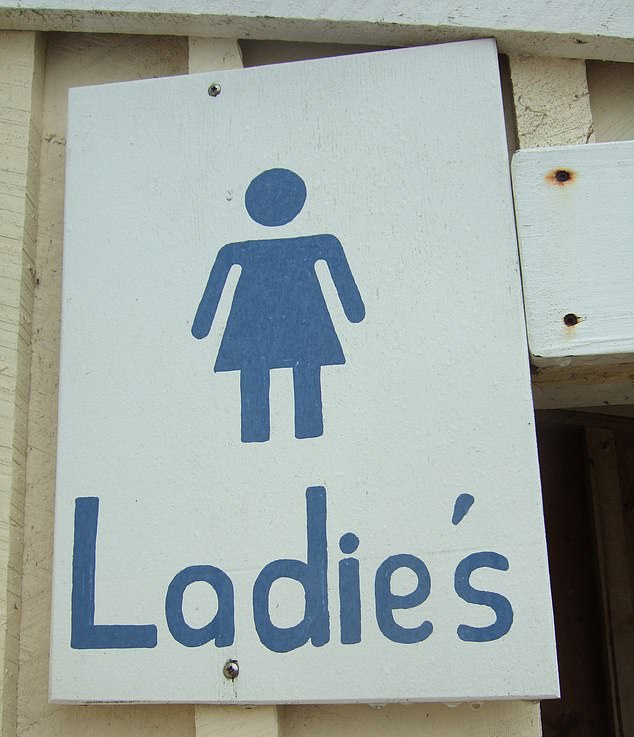 Mr Zadravic was talking about himself only, so he should have put an apostrophe before the letter ‘s’ — ‘his employee’s superannuation’.

Sending the case to trial, the judge remarked: ‘The difficulty for the plaintiff is the use of the word “employees” in the plural. To fail to pay one employee’s superannuation entitlement might be seen as unfortunate; to fail to pay some or all of them looks deliberate.’

Some people, on the other hand, err on the side of additional punctuation. They tend to go a bit mad!!!!! Exclamation mark exuberance is spilling over everywhere — and not everyone is a fan.

‘All those exclamation marks, you notice? Five? A sure sign of someone who wears his underpants on his head,’ mused author Terry Pratchett, who wasn’t a fan of the most excitable member of the punctuation set. 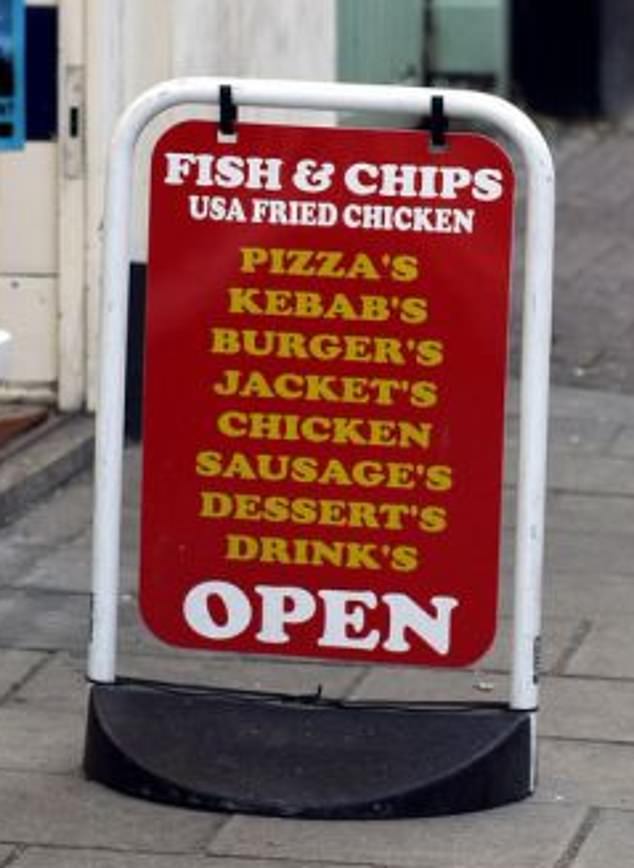 And if apostrophes are struggling, you can forget colons and semi-colons. Pictured: Overused apostrophes on a takeaway sign

Yet a lot of us, it seems, quite enjoy having our linguistic underwear on show.

And if apostrophes are struggling, you can forget colons and semi-colons. The dramatist Ben Jonson, arguably Britain’s greatest punctuator, loved the colon so much he inserted one between his first and last name in his signature, ‘Ben: Jonson’, but few would show such commitment now.

The colon is frequently left unused — instead, we are all turning to the dash. Traditionally viewed as a lazy jack-of-all-trades, the dash is certainly quick.

It requires the smallest of finger-stretches on our touchscreen or keyboard and crucially avoids any head-scratching over the finer points of punctuation.

We are all becoming, quite literally, slapdash. As for semi-colons, they are almost out the door. Personally, I love them, almost as much as I do a good adverb, and I use them everywhere. But I’m a nerd who finds them instinctively elegant.

Few would ever put one in a WhatsApp message, where they would surely stick out like a sore thumb, or an inadvertent aubergine emoji. 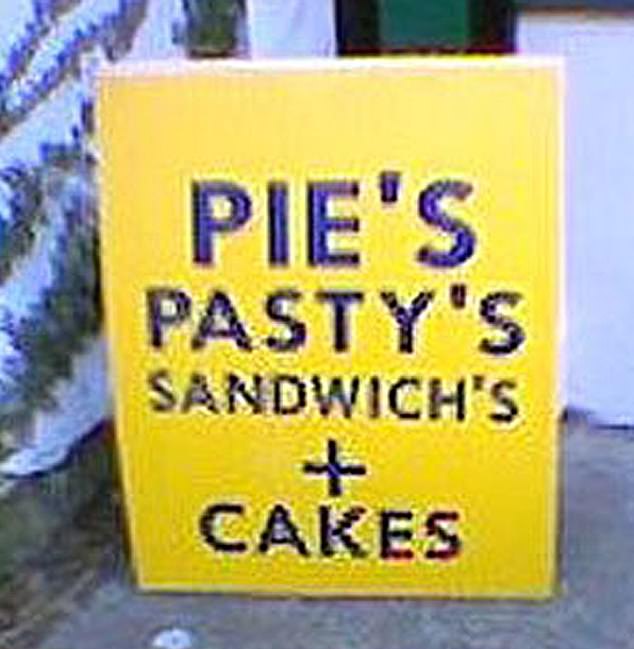 We are all becoming, quite literally, slapdash. As for semi-colons, they are almost out the door. Pictured: Unnecessary apostrophes on a café sign

Recently, even the full stop has come under fire. Young people, it is said, find it aggressive.

If this idea makes you snort, you’re not alone. I also found it preposterous that a single and surely necessary dot could inspire such dislike.

But when I looked more carefully at the reasons for it, I began to understand. No one (I hope) is saying we can dispense with the full stop altogether. But if you were to tell a friend that you’d won the lottery, you might expect a punctuation-less ‘Amazing’ in return — or, better still, an ‘Amazing!’.

What wouldn’t seem quite so heartfelt is the flat response, ‘Amazing.’. In this case, the full stop surely suggests a touch of envy, of resentment even, not of genuine pleasure in a friend’s good fortune and happiness.

Either way, it’s unlikely that any of your friends will send you congratulations in beautiful copperplate handwriting.

As Lancaster University’s Dr Vaclav Brezina said, publishing his report: ‘We text or message friends and colleagues, and get an immediate response, but we might be hard-pressed to remember when we last wrote a letter.’

The way we communicate is constantly changing, and that means there will always be headlines bemoaning that, once more, the golden age of English is dead. This is far from new. In the 18th century, Jonathan Swift was racked with anxiety over the future of English, complaining that ‘our Language is extremely imperfect; that its daily improvements are by no means in proportion to its daily Corruptions’.

Among his damning observations of the ‘Abuses and Absurdities’ of English is that ‘Most of the Books we see now-a-days, are full of those Manglings and Abbreviations’. Centuries later, those abbreviations are an integral part of daily conversation.

Are these latest findings further proof that English is falling down a very slippery slope? Can the apostrophe hold out against the current tide of indifference?

I like to think of questions like these as ‘foofaraws’ — a big commotion or fuss over something we need not worry so much about. 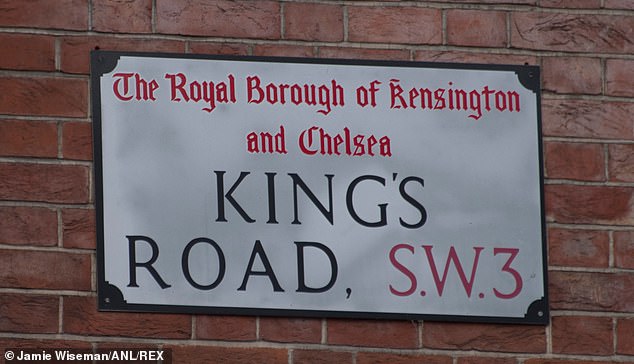 Are these latest findings further proof that English is falling down a very slippery slope? Can the apostrophe hold out against the current tide of indifference? Pictured: A road sign in London with a mystery apostrophe

We have always feared new technology. When the telegram arrived, some saw it as the death-knell to expressive language. The Victorians also feared that the postcard would kill off proper writing. It was just the same at the dawn of the internet, with predictions that language would become bland and monosyllabic.

None of these fears has materialised. Like every other aspect of English, punctuation is merely adapting to our needs.

It is not the rules and regulations of dusty Latin grammars that matter, but the beauty and clarity of our communication. 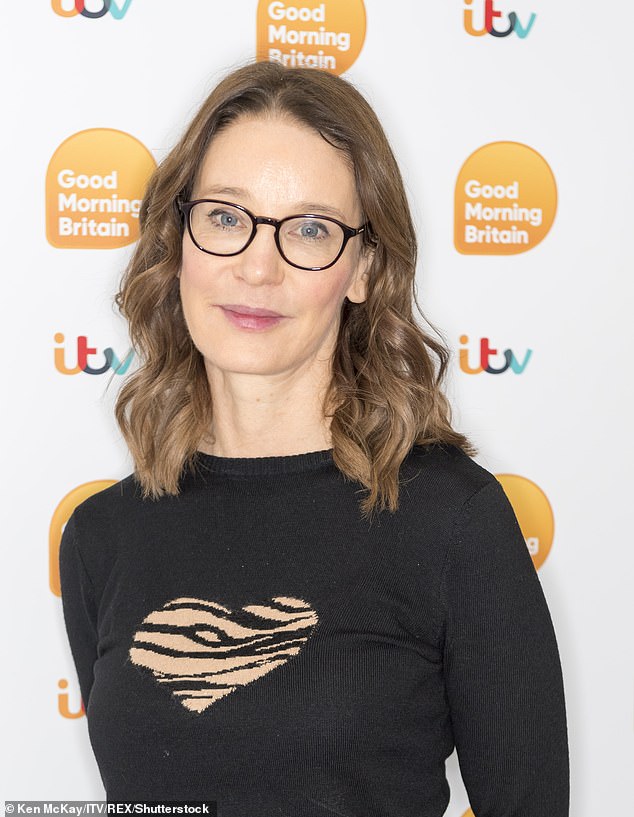 It is not the rules and regulations of dusty Latin grammars that matter, but the beauty and clarity of our communication

My guess is that few of us would leave out an apostrophe when writing to our child’s headteacher. On the other hand, if we choose to have an exclamation mark bonanza in a text message to our friends, that is up to us.

We have always been remarkably adept at code-switching, and language is a perfect example. As for the bigger question, ‘Will English ever recover?’ — the answer has to be yes. Language has always evolved as society itself moves on.

We should learn the rules, for sure, but that doesn’t mean we can’t break them among friends.

If you want to wear your underpants on your head, then please go ahead. Just don’t do it too often in public.

How Trump and Biden are spending Christmas Day