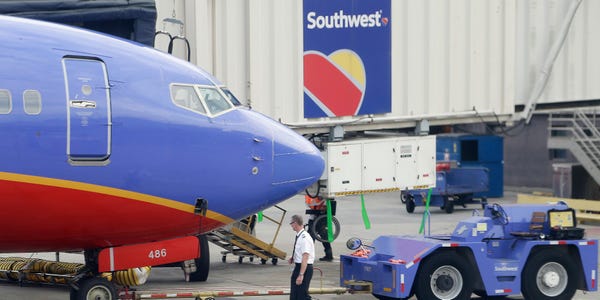 Southwest Airlines apologized to a 22-year-old woman who was barred from boarding a flight to Chicago for wearing a "lewd, obscene, and offensive" top, BuzzFeed News reported.

On October 6, an employee at LaGuardia Airport in New York blocked Kayla Eubanks from walking through the boarding gate to her seat on the airplane because she had been wearing a black halter top.

"I was told that passengers may look at me in my attire and be offended," Eubanks wrote in a now-viral Twitter thread.

Eubanks posted a video that showed an employee specifying that her halter top was the reason she couldn't be let on the flight. In the video, Eubanks asks the employee to produce a copy of the policy the said she couldn't board a flight while wearing this shirt. The employee promised to show the policy but then couldn't find it.

"While Southwest's dress code is relaxed and casual, you will be expected to present a clean, well groomed, and tasteful appearance," the policy continues.

The airline did not immediately respond to Insider's request for comment but told BuzzFeed News it had issued an apology and refund to Eubanks.

Eubanks wrote on Twitter that she had been stopped because the employee and the airline were trying to police a woman's body.

"How will my shirt impact my flight, for myself, the other passengers or even the pilot? Y'all have a dress code for CUSTOMERS who pay to get on a plane? It's the constant policing of women's bodies for me," Eubanks said.

After being held at the gate for 30 minutes, Eubanks was able to board the flight only when she wore a shirt given to her by the flight's captain, she said on Twitter.

Eubanks told BuzzFeed News the apology from Southwest Airlines is not enough and the airline should discern "a standard across the board, period."

"I think they need to update the policy," she said. "I think it needs to be nondiscriminatory. I think that as a woman, specifically a Black woman, my body is constantly policed and over-sexualized, and that's not fair to me."

A science student recorded a work call to show how often women in STEM are interrupted by men, and the TikTok went viral

Iowa State University forced a professor to change syllabus after threatening to kick students out of class if they participate in racism, sexism, or homophobia