Scottish rugby fans took to social media to post memes after the country’s historic win against England in the Six Nations today.

The team celebrated a rare victory in the annual Calcutta Cup in a virtually empty stadium in Twickenham, southwest London, this evening.

And fans celebrated the nation’s narrow 11-6 win over its fierce rivals by sharing images online.

Unable to attend the match in person, fans were still able to share in the merrymaking online and gloat to England supporters after the game ended. 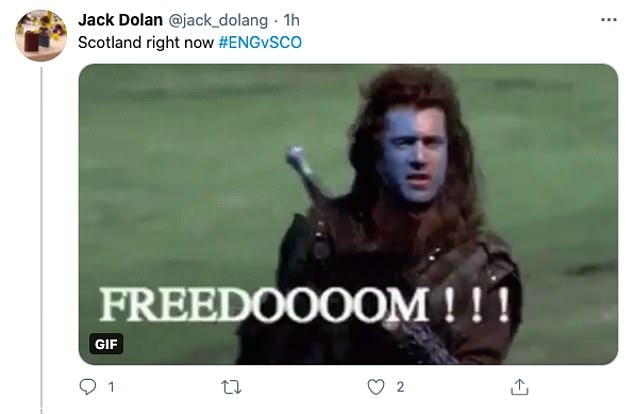 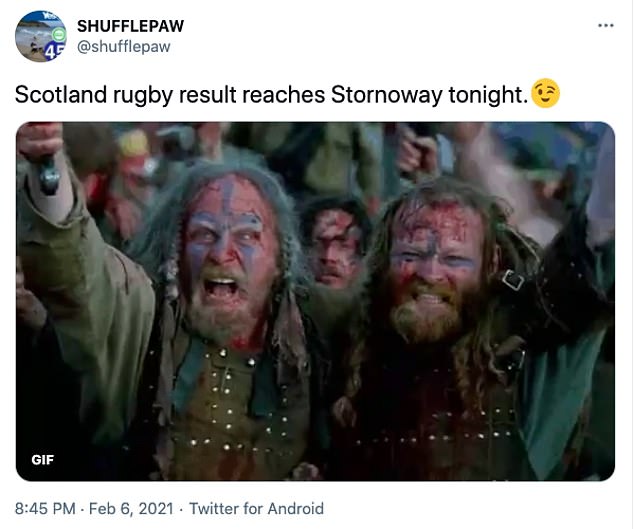 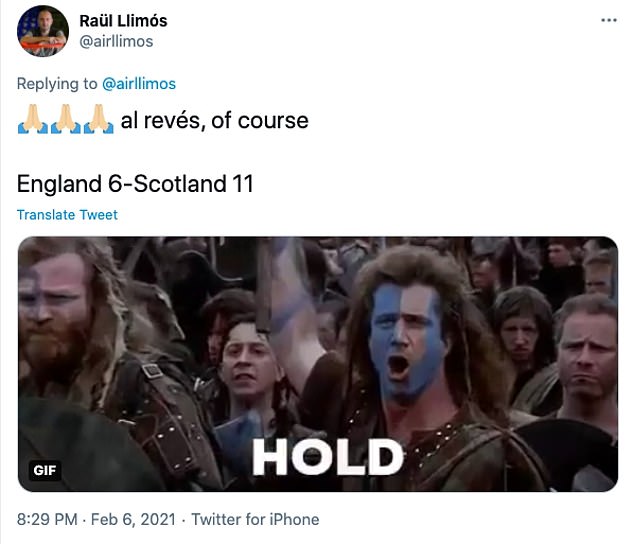 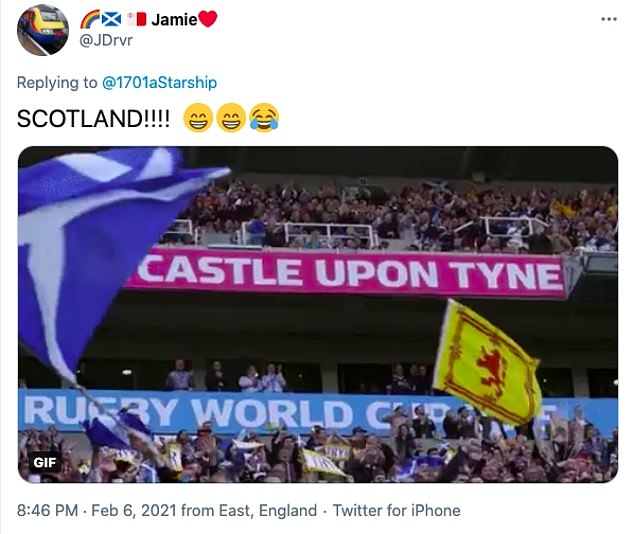 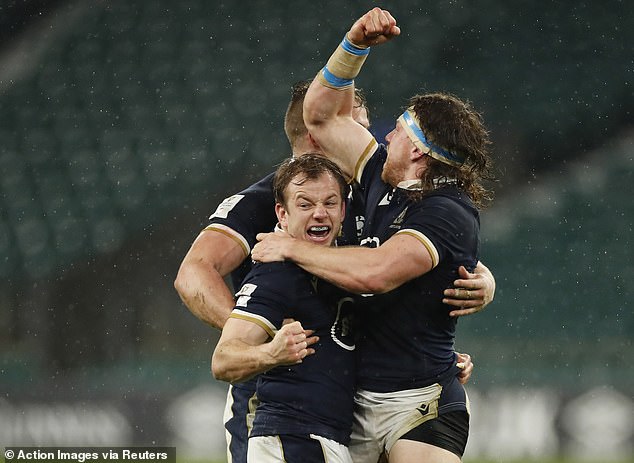 Douglas Johnstone shared a gif of the grail knight in Indiana Jones And The Last Crusade saying ‘you have chosen wisely’ in reference to Scotland player Cameron Redpath, who previously represented England in youth tournaments.

And in response, presenter Gabby Logan said: ‘A thing of beauty.’ 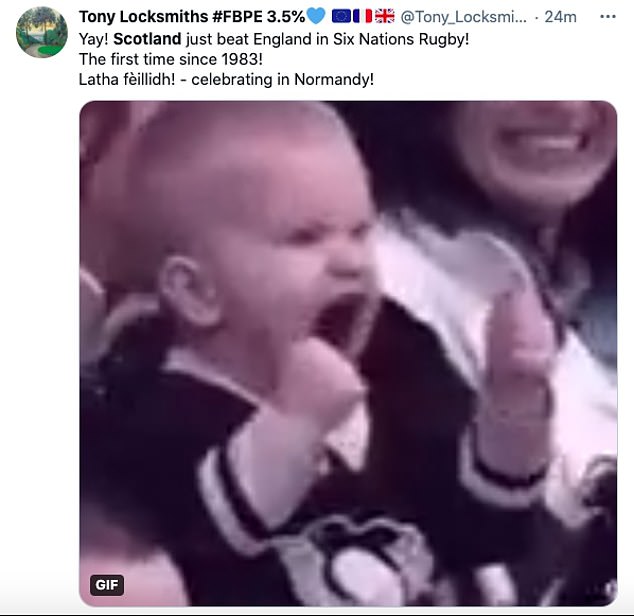 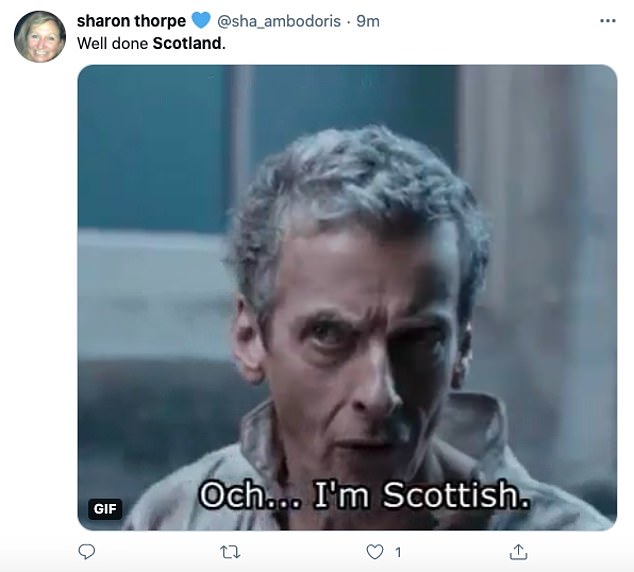 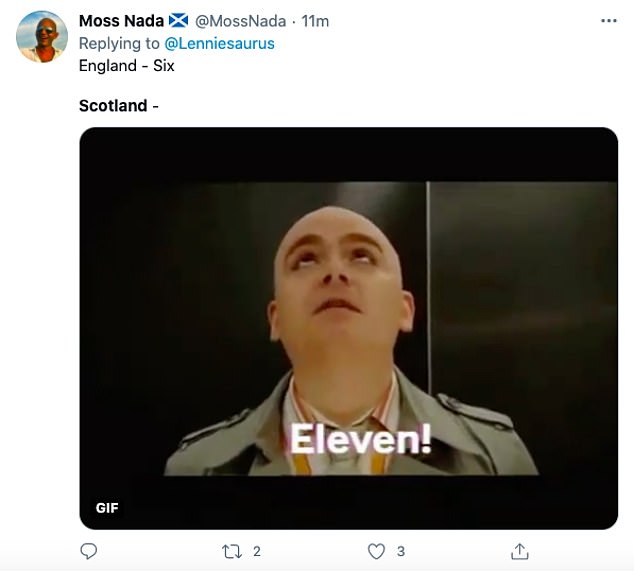 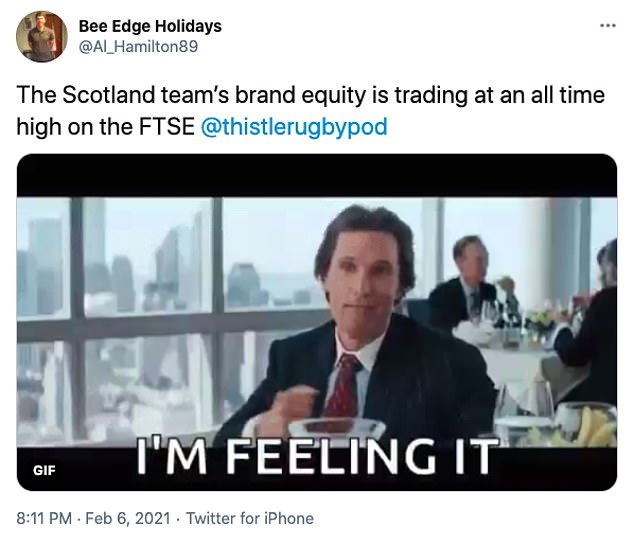 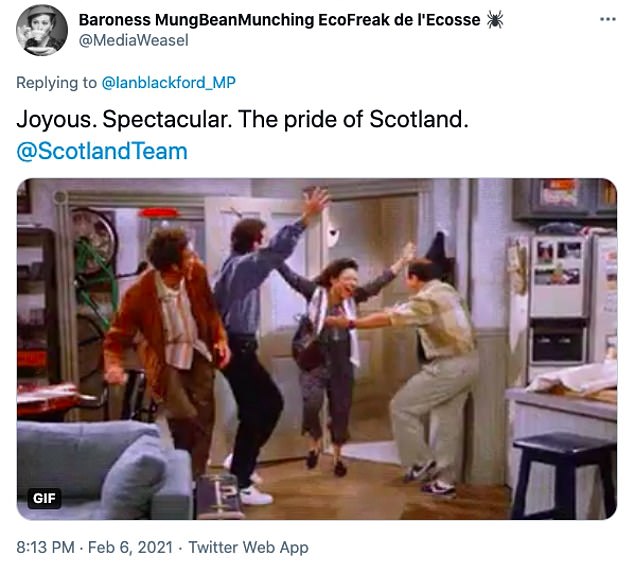 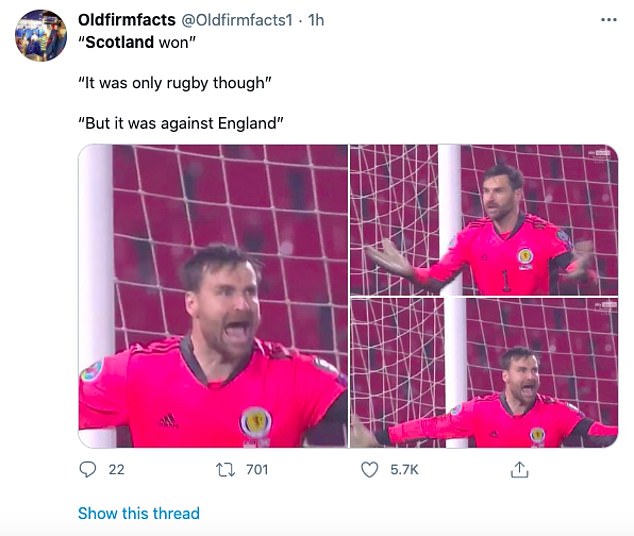 And even Scotland’s first minister Nicola Sturgeon joined in the celebrations, tweeting: ‘The Calcutta Cup is coming home!! Massive congratulations ⁦to Scotland – what a performance and a truly historic win!’

Today’s win was all the more crushing for England as the fixture marked the 150th anniversary of the first ever rugby Test, which took place on March 27, 1871 in Edinburgh.

Earlier France trounced Italy 50 points to 10 at a quiet contest at the Stadio Olimpico in Rome.

It is only a few months since the final fixtures of 2020’s tournament were played after the outbreak of the pandemic in Europe halted the competition last spring. 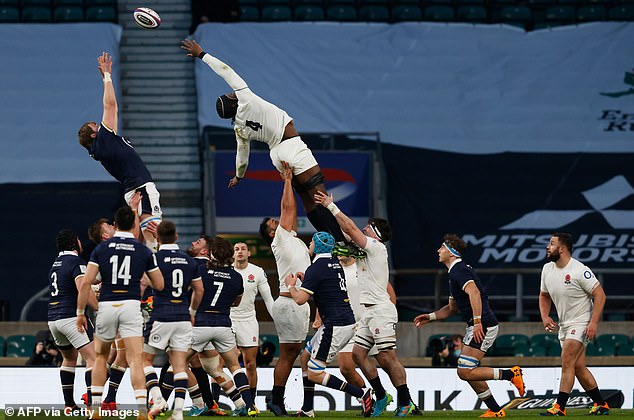 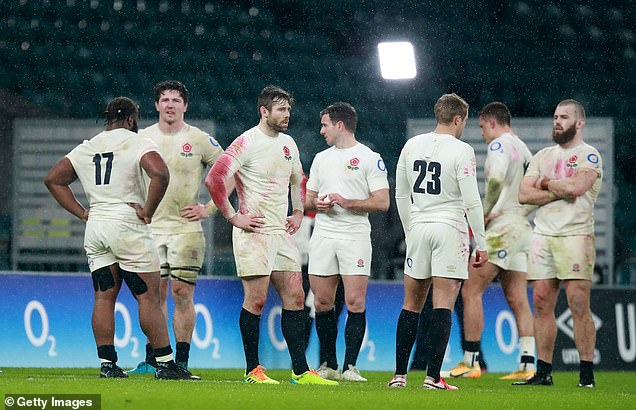 The game marked the 150th anniversary of the first ever Test, which took place on March 27, 1871 in Edinburgh.

Professional sport continues to be allowed to happen despite the strict third national lockdown still in force.

Last year’s tournament was abandoned ahead of the final round of matches as the pandemic started spiralling out of control.

The remaining games were finally played in late 2020 and England were crowned champions.

Both sets of players would have been hoping to catch the eye of one of the few permitted spectators – Warren Gatland, head coach of the Lions, who is considering his selection picks for this year’s tour to South Africa, if it is not axed.

Braveheart: One of Hollywood’s least accurate films tells the story of Scotland’s fight for independence against England 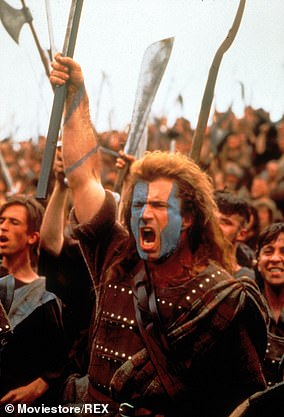 One of Hollywood’s most iconic quotes comes at the end of Braveheart, when the embattled Scottish hero William Wallace rouses the troops and cries: ‘They may take away our lives, but they’ll never take our freedom!’

One of Hollywood’s most iconic quotes comes at the end of Braveheart, when the embattled Scottish hero William Wallace rouses the troops and cries: ‘They may take away our lives, but they’ll never take our freedom!’

In truth, Mel Gibson could have been talking about the freedom to completely rewrite history, such is the film’s reputation for sacrificing fact for fiction.

The movie follows the heroic exploits of William Wallace, a late 13th-century warrior who led the Scots in their fight for independence against the English and King Edward I.

Firstly, Wallace is shown growing up in poverty as a farmer, when in fact he was born into the Scottish aristocracy, nor did his father die at the hands of the English during his childhood.

He is depicted as the lover of Isabella of France, the wife of Edward II. It is implied that she becomes pregnant with Wallace’s baby, making him the father of the future Edward III. In reality, Isabella would have been three years old at the time.

The Scottish warriors are also shown wearing kilts, but belted plaids were not introduced until the 16th century, more than 200 years later.

Other inaccuracies include Robert the Bruce betraying Wallace, the Scots sacking York, Edward I being a pagan king, Edward II being a homosexual and bagpipes being banned by the English.

Ginsburg's last wish was to 'not be replaced until a new president is installed': report