Saharan Britain: Aerial views of England show scorched earth as parts of the UK resemble a desert after fields and trees turn brown in heatwave

Shocking aerial shots have revealed the impact of the sizzling heatwave leaving farmers with parched crops as half of the UK population could be facing a hosepipe ban within weeks.

These alarming photographs showed vast desert-like landscapes in areas that would normally be filled with swathes of greenery as the country endured its driest July since 1935 and record-breaking temperatures of 40C (104F).

Patches of scorched grass could be seen right across the countryside in photographs taken surrounding East Midlands Airport as concerns grow over water shortages thanks to rising temperatures.

The Met Office has also raised its Fire Severity Index to exceptional – the highest level – today for much of southern England, and Wales alongside an amber, as the mercury is forecast to climb to ‘lethally hot’ temperatures of 36C (97F) this weekend. The warning system also been at its second highest level of alert for seven weeks, which is the longest stretch since 1976.

It comes as several households in parts of Buckinghamshire and Oxfordshire are facing water shortages after a pipe burst on Thursday and the Stokenchurch Reservoir dried-up.

Thames Water confessed yesterday to letting nearly a quarter of all water it supplies leak through cracks – but the firm’s strategy director said we needed to ‘be more efficient’ – like the Germans and Danes.

It said it is preparing to impose a hosepipe ban in the ‘next couple of weeks’, affecting 15million customers in London and the South East. 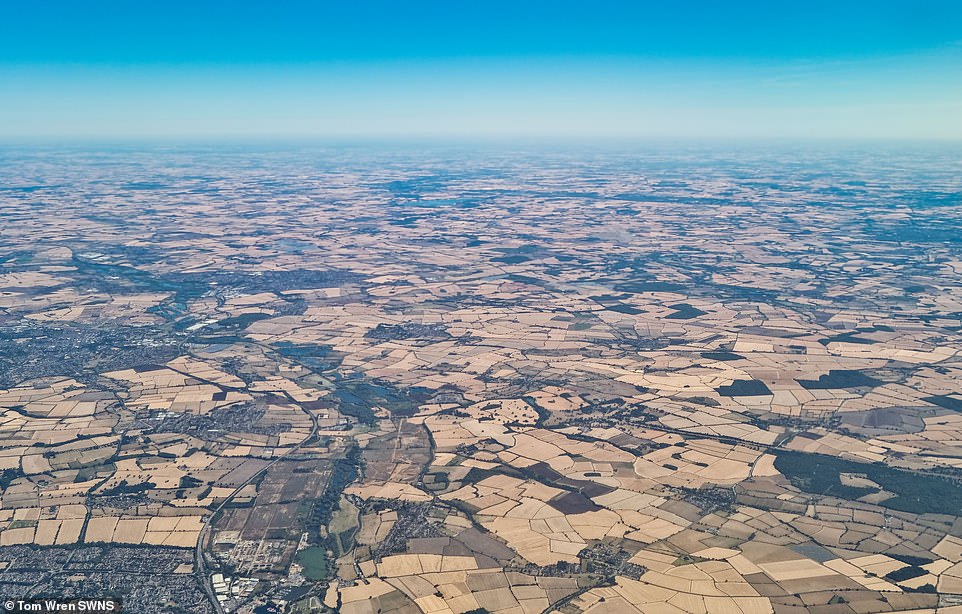 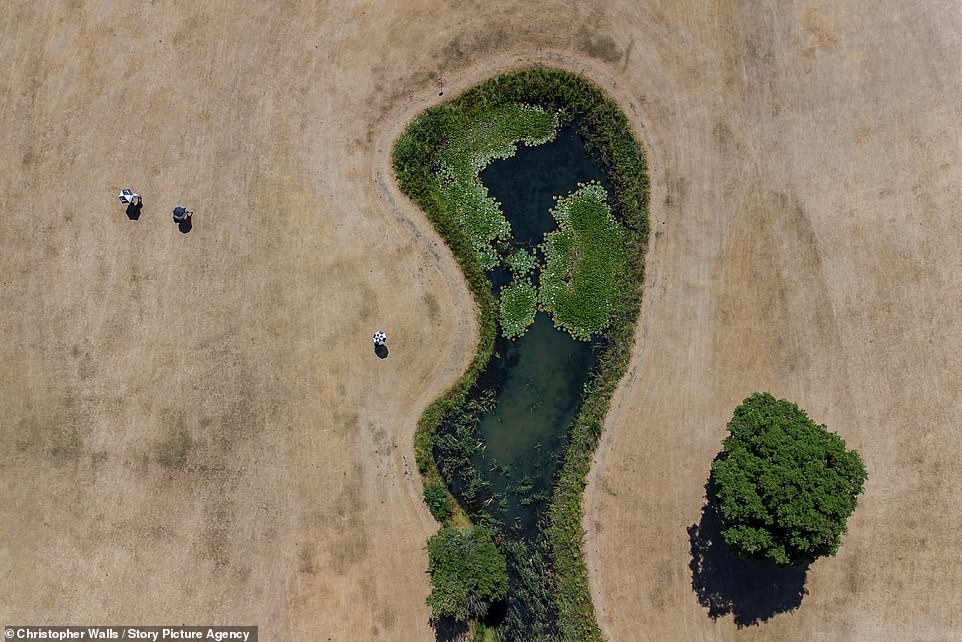 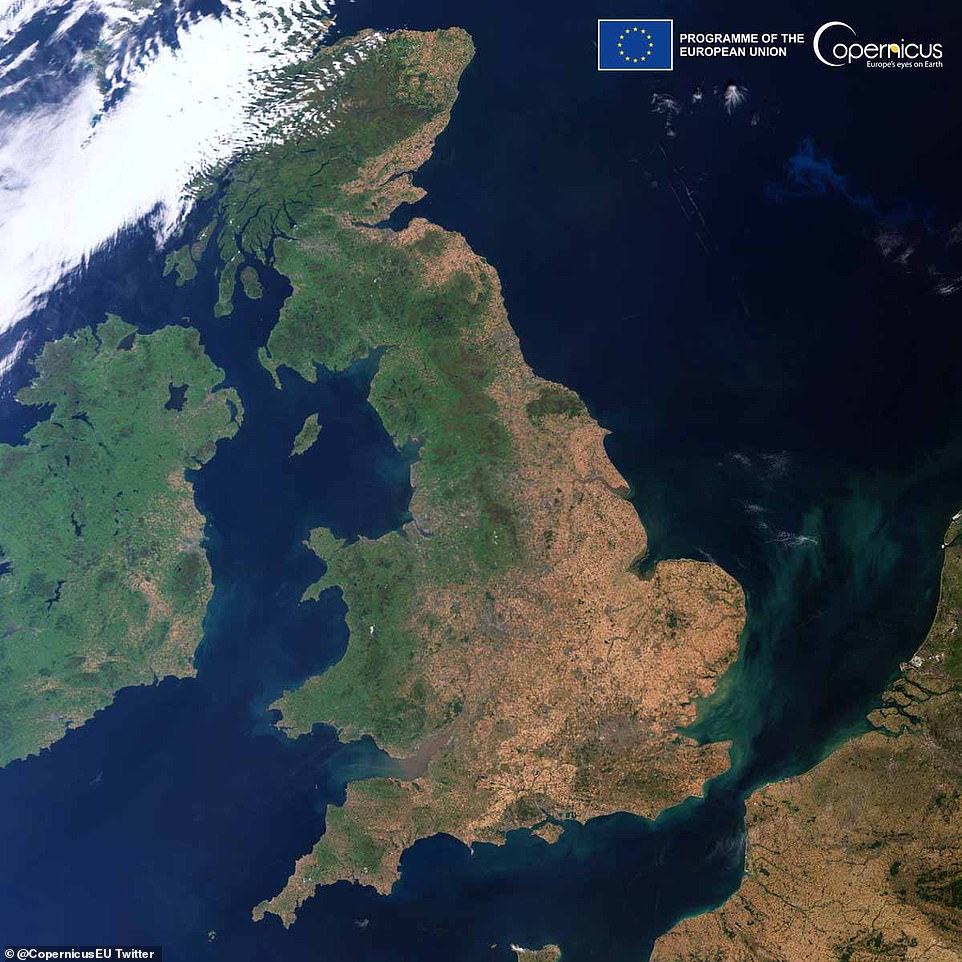 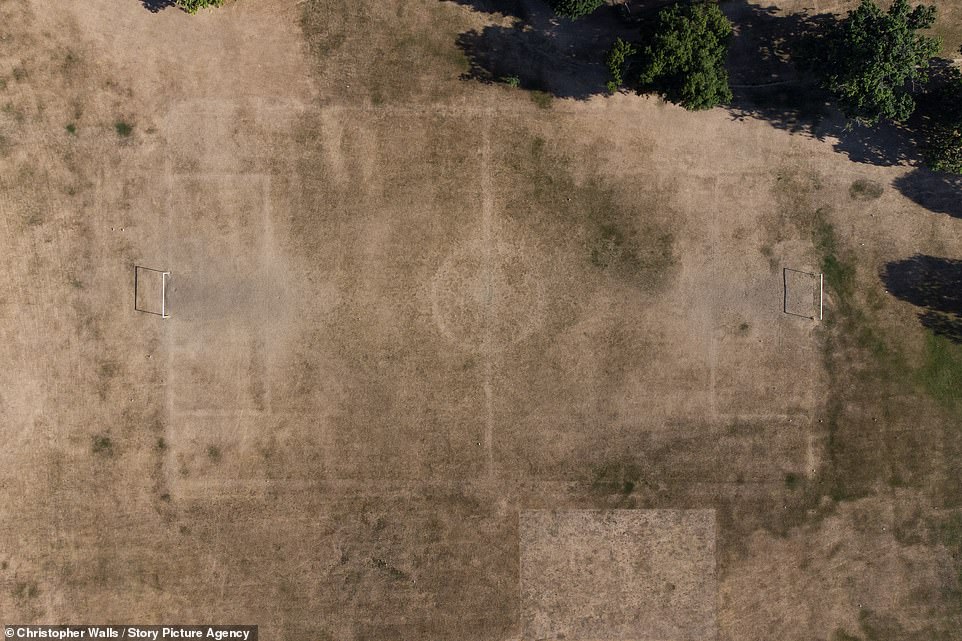 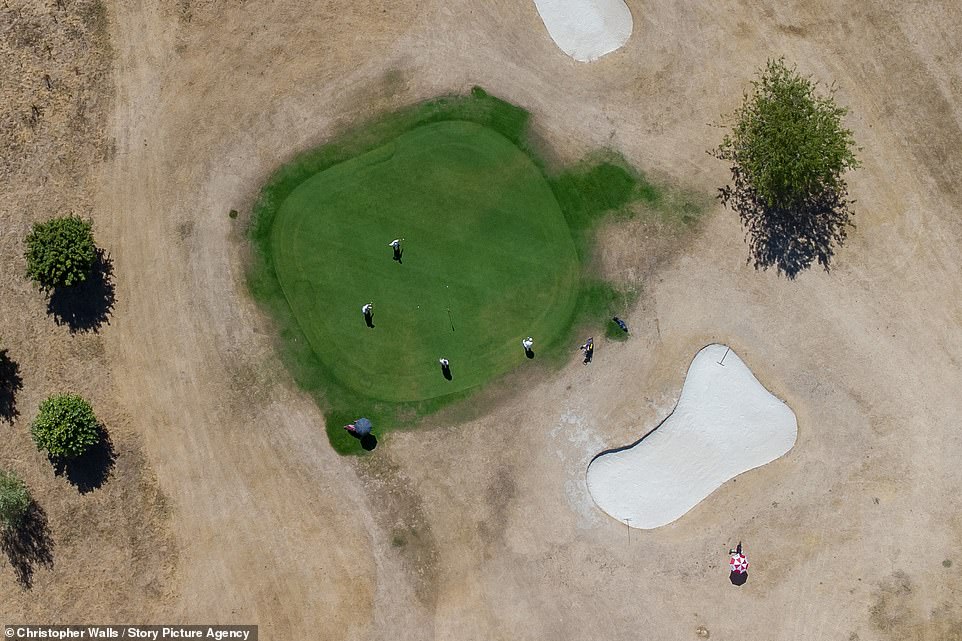 Pictured: Golfers are seen playing on a scorched course as the UK enters another sizzling heatwave 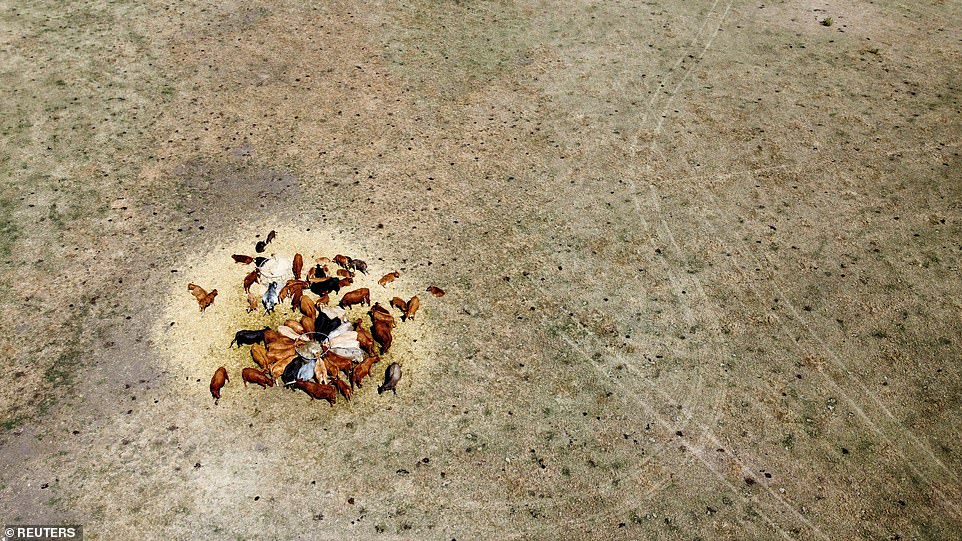 Pictured: Cows are pictured eating straw and grass silage, which is normally a winter feed, at a farm in Harpole, near Northampton 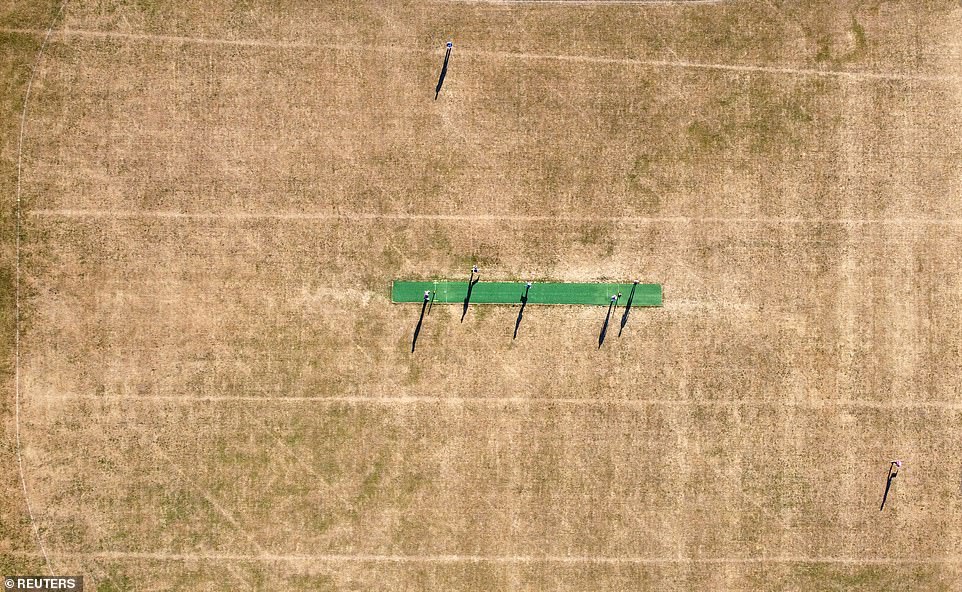 Pictured: An alarming aerial view of a dried out grass outfield during a T20 Last Man Stands cricket match

Environment Secretary George Eustice called in water company bosses yesterday to discuss the water crisis amid reports a state of drought could be declared.

Yorkshire Water confirmed it was also considering bringing in a hosepipe ban. Sources at the Environment Agency confirmed that Yorkshire, Anglian and South West Water are all considering hosepipe bans – which would place water restrictions on more than 32million people in England and Wales.

South East Water in Kent and Sussex, Southern Water in Hampshire and the Isle of Wight and Welsh Water have declared bans.

But Thames was forced to admit that while it was seeking a hosepipe ban it wastes more than 635million litres of water a day.

Cathryn Ross, strategy and regulatory affairs director at Thames Water told Radio 4’s Today: ‘In all probability we’ll be moving to introduce the hosepipe ban in the next couple of weeks.’

She confirmed leaks were endemic across Thames’s network.

Andrew Sells, head of Natural England between 2014 and 2019, accused water companies of selling off reservoirs which could have helped ease drought to housing developers.

‘Several of our water companies preferred to build houses on some of their reservoirs, and last week we learned that together they have built precisely zero new reservoirs in the past 30 years’, he wrote in the Daily Telegraph.

‘No doubt some reservoirs had reached the end of their working lives, but in abandoning this infrastructure, without any replacements, they have again put short-term profits ahead of long-term supply.’ 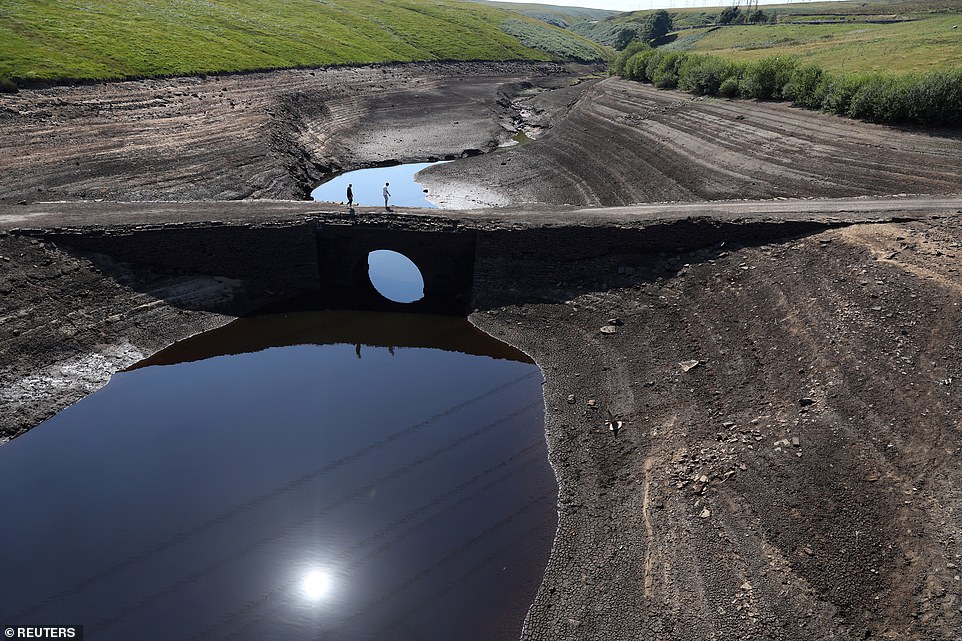 Pictured: Sunseekers walk near the low water levels at Baitings Reservoir in Ripponden, West Yorkshire as water company bosses are being urged to impose a England-wide hosepipe ban to avoid the worst effects of drought on rivers and wildlife 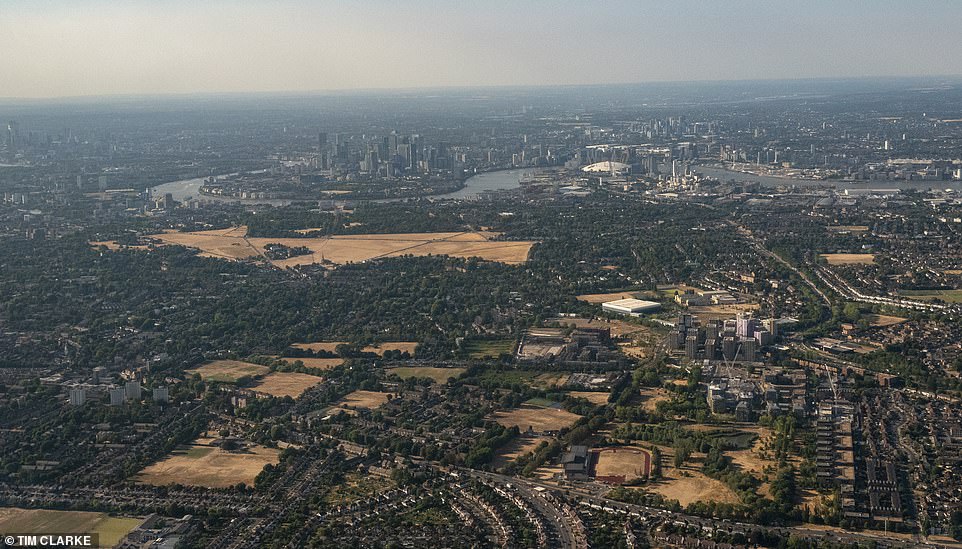 Pictured: Arid areas of land in South East London as the hot weather continues and threats of hose pipe bans may come into force 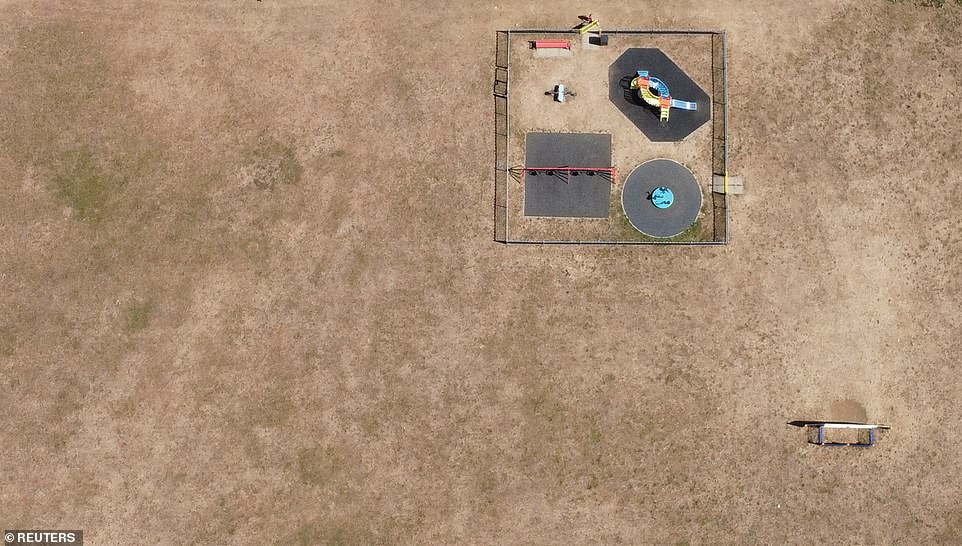 Pictured: Dried out ground in a park, following a long period of little rainfall and hot weather in St Albans 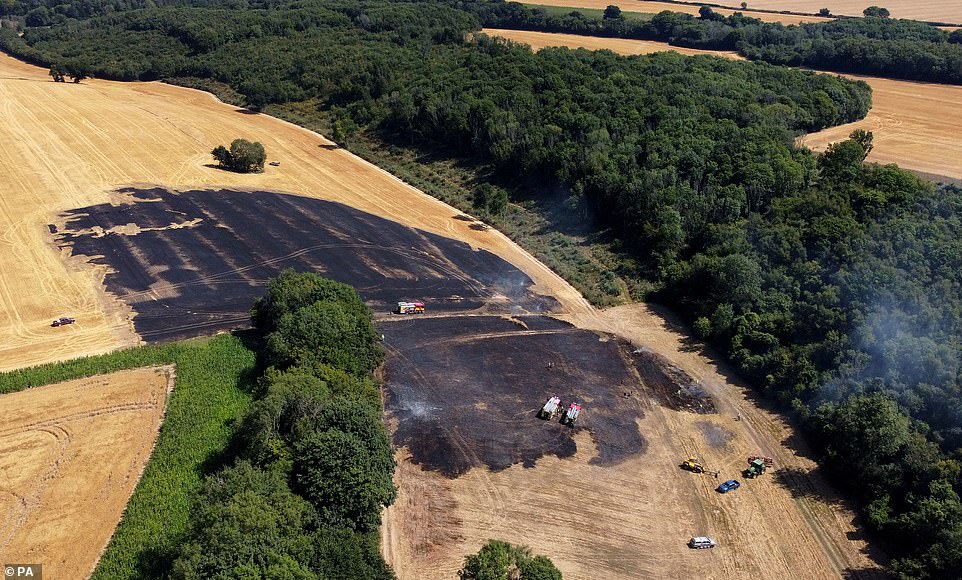 Firefighters bring a field fire under control near Ashford in Kent as the Met Office raised its Fire Severity Index to exceptional – the highest level – today for much of southern England, and Wales 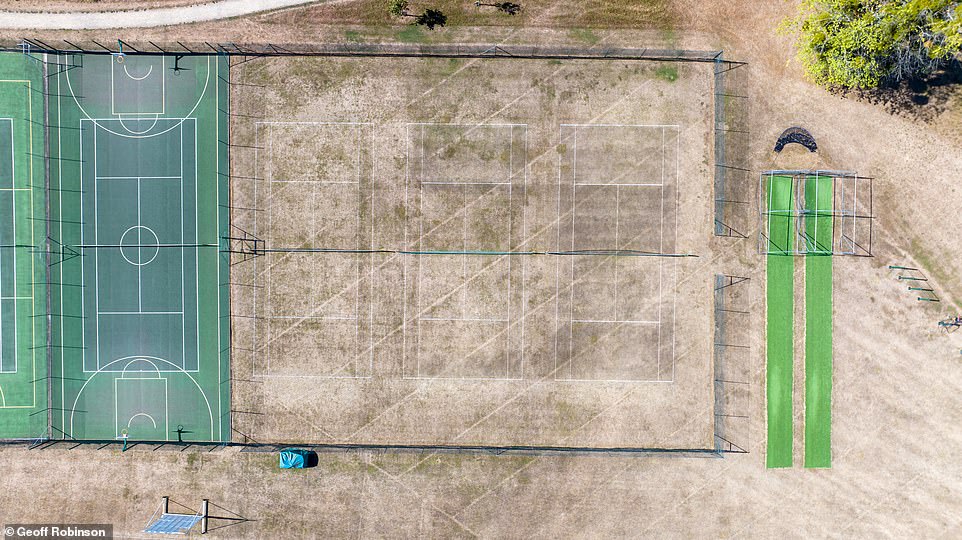 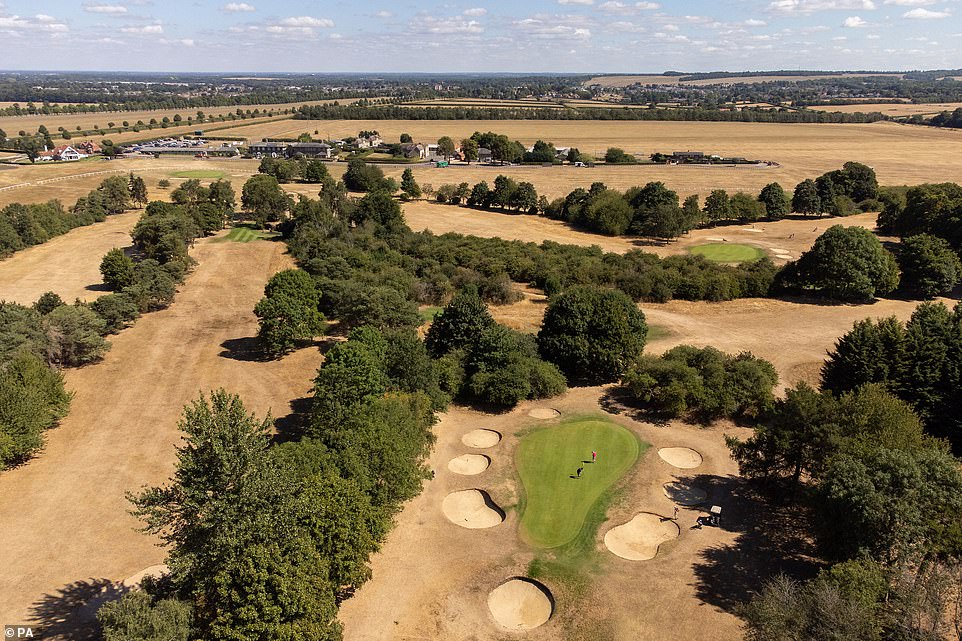 Scorched fairways at the Links Golf Club in Newmarket, as Britain is braced for another heatwave that is set to last longer than July’s record-breaking hot spell 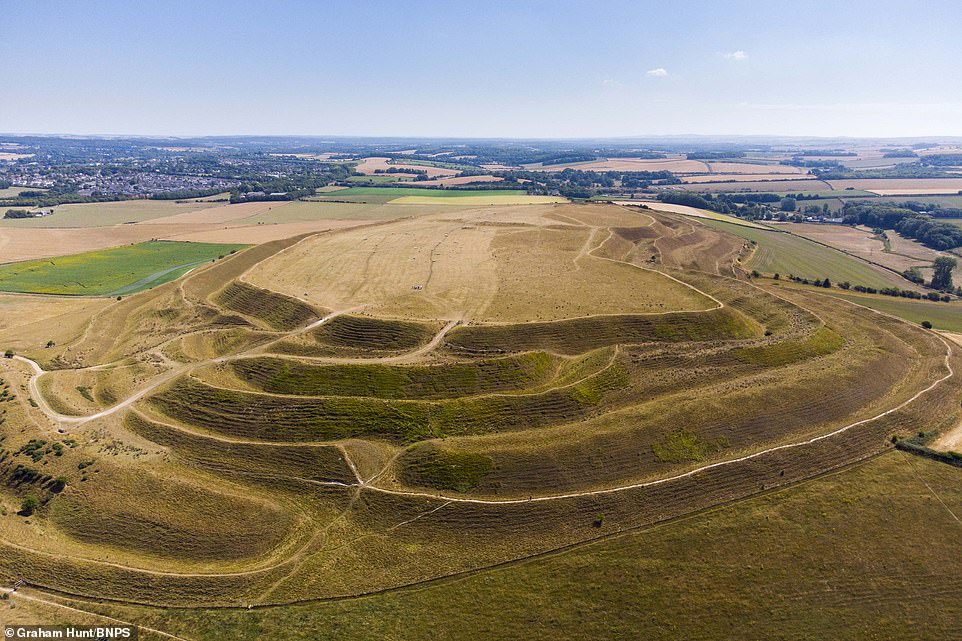 The companies which have sold off decommissioned reservoirs in recent years include Thames Water, Severn Trent and Southern Water.

Meanwhile, the Woodhead Reservoir in the Peak District has seen a drop in water levels over the last few days.

Nearby, the River Granta is still flowing but at much lower levels than usual.

Last month it was reported that the river was at a lowly 5cm, despite previously sitting at more than one metre.