Rome has closed down all its Catholic churches in Italy’s latest drastic step to halt the coronavirus outbreak.

Worshippers have been exempted from attending Sunday Mass in a shutdown announced by the Pope’s deputy in Rome last night as Italy’s death toll passed 1,000.

Cardinal Angelo De Donatis said Rome’s 900 churches will be closed until at least April 3, when Italy’s nationwide quarantine is due to end.

The Vatican has already shut down St Peter’s Square, St Peter’s Basilica and the Vatican museums to tourists with weddings and funerals called off.

But the total church closure is thought to be unprecedented. Some places of worship keeping their doors open even during World War II when the Nazis and Italian fascists kept Pope Pius XII confined to the Vatican. 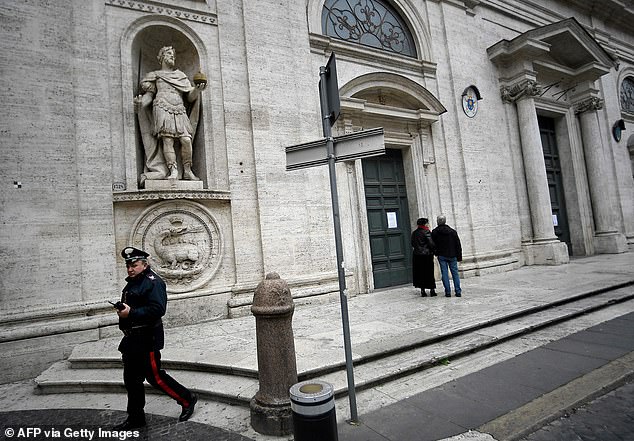 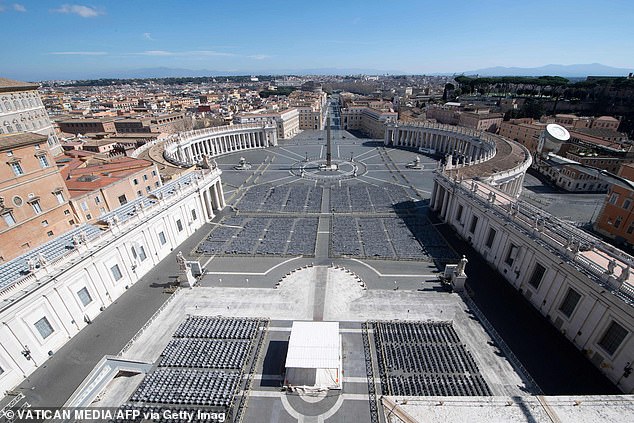 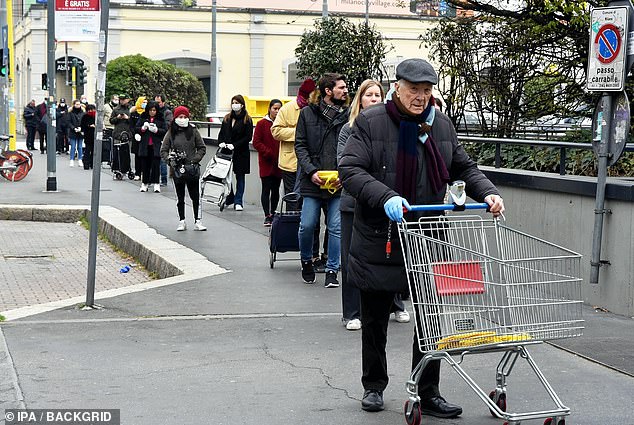 The new regulations cover the whole Italian capital, and not just the tiny Vatican City.

The statement added that monasteries would remain open to ‘communities that habitually use them as residents’.

‘This provision is for the common good,’ De Donatis wrote.

De Donatis is officially the Cardinal Vicar of Rome, standing in for the Pope who is technically Bishop of Rome but regarded as too busy for local duties.

The cardinal said he was finally moved to close Rome’s churches by ‘the even more binding restrictions placed on the ordinary movement of people’.

Italy’s government has imposed an ever-growing crackdown as the virus continues to spread, with all shops now closed except for food stores and pharmacies.

The Pope himself has been kept away from the public since he appeared to have a cold during an Ash Wednesday service last week.

Pope Francis has been appearing via a Vatican live-stream and has complained of feeling ‘caged’.

The 83-year-old was forced to miss his weekly Wednesday appearance on St Peter’s Square where he often hugs and shake hands with the faithful.

The pontiff also had to read his traditional Sunday Angelus Prayer into a camera instead of his usual window overlooking the square. 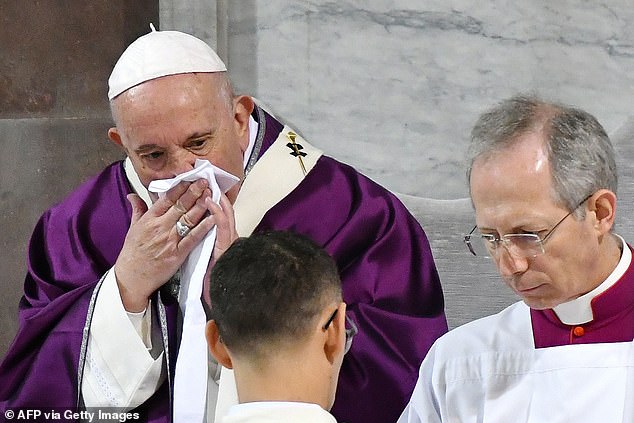 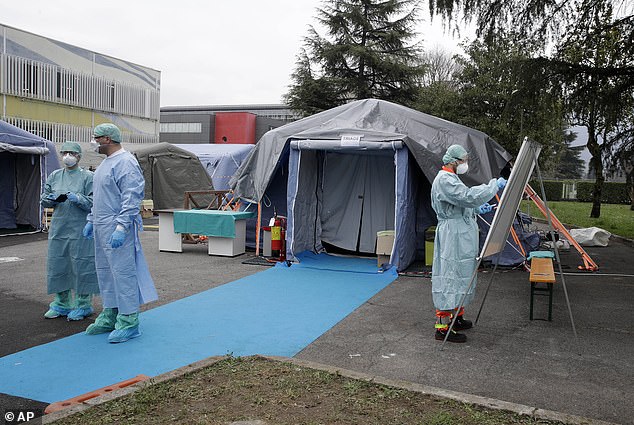 Paramedics work at a makeshift medical centre in Brescia, in northern Italy which has been worst affected by the outbreak 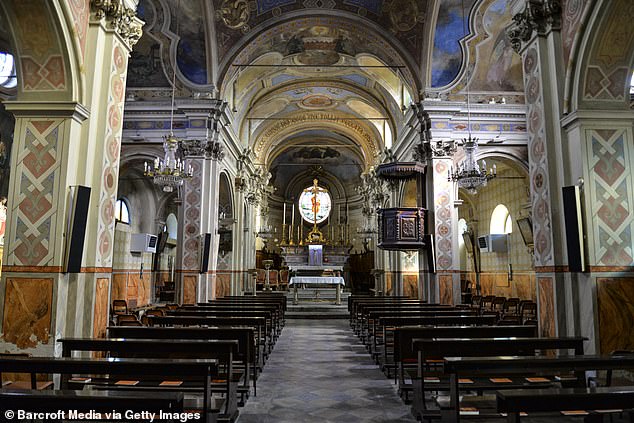 Francis is thought to have tested negative for coronavirus last week after appearing visibly ill and cancelling a series of events.

The Vatican has recorded one Covid-19 infection and is awaiting the results of another person who attended one of its functions at the start of the month.

Italy as a whole has now recorded more than a thousand virus deaths after 189 new fatalities took the total to 1,016 last night.

The virus is thought to be more dangerous for older people and at Italy has one of the oldest populations in the world.

Italian streets have been left empty by the unprecedented quarantine as tourists stay away from usually crowded landmarks.

Famous piazzas in Rome, Florence and Venice have been deserted except for sanitation workers spraying them with disinfectant.

Restrictions were tightened even further on Wednesday night when bars and restaurants were shut down, leaving only a few shops open.

The quarantine is in place until at least April 3, but top health official Walter Ricciardi told Italian TV yesterday that his countrymen should prepare for a ‘long war’.

Italy’s government has also announced plans to boost the economy with extra spending, with particular fears for the tourist industry.

Meanwhile, time is running out for Britons to return home from Italy with the last flights leaving tonight and neighbours shutting their borders.

Austria has ordered a halt to flights and trains from Italy while Slovenia has begun imposing controls at its border with the country. 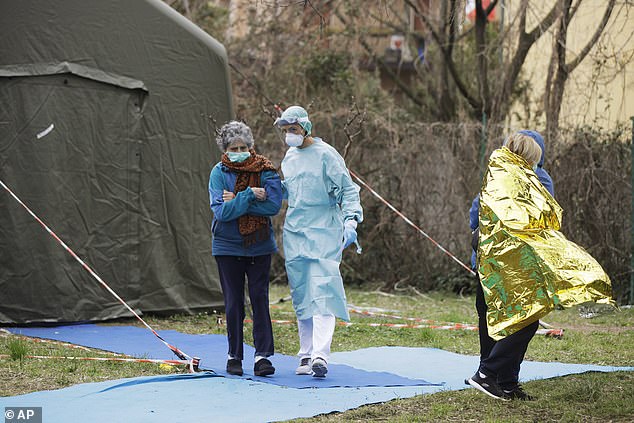 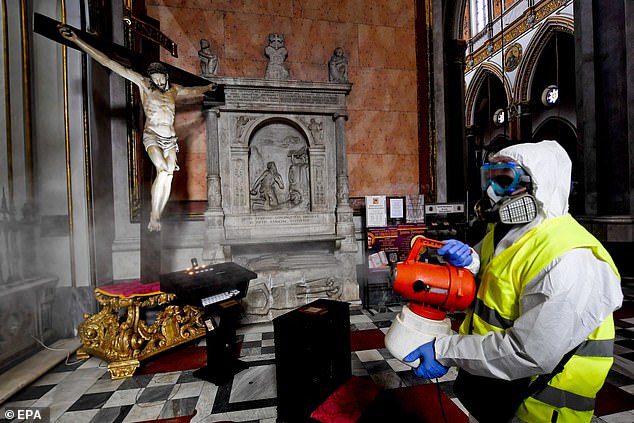 Switzerland said yesterday that the border remained open for commuters with work permits, but nine border crossings have been closed.

A spokeswoman for Germany’s Deutsche Bahn said that the only service it had linking it to Italy, between Munich and Venice, has also been suspended.

France’s national train company SNCF said on Tuesday it was ‘waiting for advice’ about how to proceed regarding services to Italy.

Since late February, French staff on cross-border SNCF trains have been getting off before the Italian border and being replaced by Italian colleagues.

British expats who are still in in Italy have described eerie scenes and fears over their finances after Italy was placed in lockdown.

Philip Jones, 53, from Swansea, moved to Venice with his wife eight years ago, and works as a writer, teacher and translator.

‘We’re in the period now when the tourist industry (usually) really starts to kick in and you start to see significant numbers of visitors,’ he said. 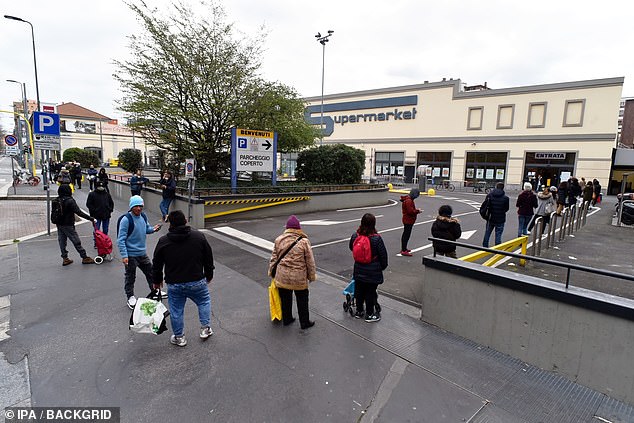 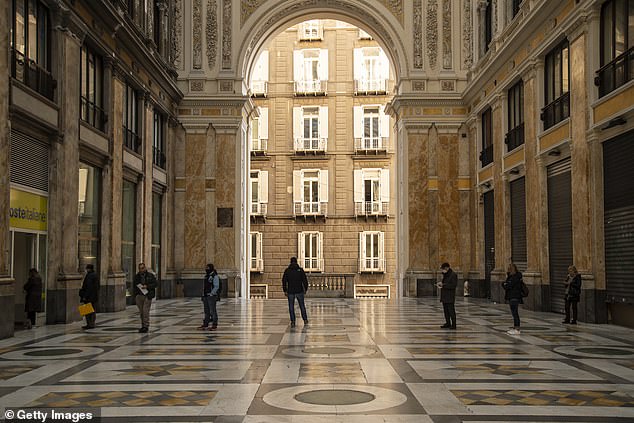 He added: ‘I was in Piazza San Marco last Friday morning, even before the main restrictions came in, and it was empty at 10 o’clock in the morning, absolutely empty. It’s usually packed.

‘It’s been amazing, it’s like somebody has turned the key and switched the visitors off.’

Others expressed concerns about the impact the crisis would have on the economy, in particular part-time workers and the self-employed.

Melissa Stott, 47, originally from Bishop’s Stortford, has lived in Italy for 24 years and works as a self-employed music and dance teacher.

‘My work has completely stopped which I am really going to feel next month or the month after,’ she said.

‘This is the third week and we’ve got another three weeks after this, so six weeks with no pay. Any hours I don’t do I don’t get paid for.’