Retired butcher, 90, who stabbed his blind wife as she slept because he could not cope with caring for her is spared jail

A 90-year-old retired butcher who stabbed his blind wife as she slept because he could not cope with caring for her was spared jail today.

Mrs Turpin said in a video recorded while she was in hospital: ‘He woke me up with the knife in my chest, telling me he couldn’t take any more. It made him ill and then the knife went in. I was screaming for help.’

The former Smithfield butcher denied and was cleared of attempted murder and an alternative charge of causing wounding with intent.

He was convicted of unlawful wounding and given two years in prison suspended for two years, as well as an electronically monitored curfew for three months at the Old Bailey today. 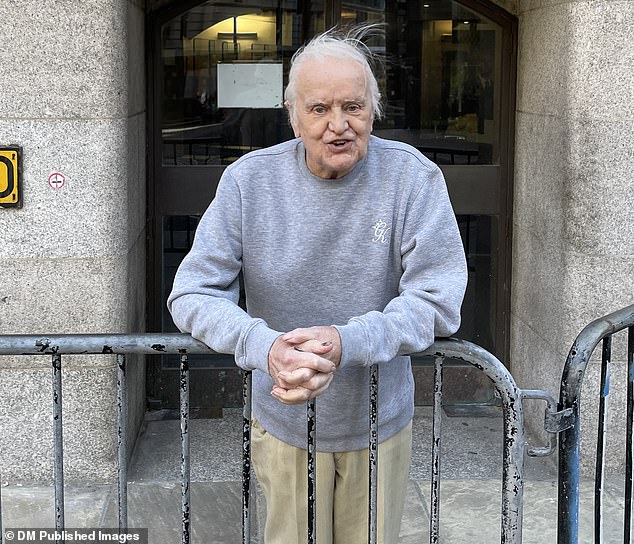 He had admitted that he must have caused his wife’s injuries but insisted he did not intend to harm her.

Turpin did not attend his sentencing because he is in hospital as a result of ongoing health complications, the court heard.

He consented to the hearing proceeding without him.

Judge Alexia Durran had indicated she would not be sending Turpin to prison and handed him a two year prison sentence suspended for two years.

She said: ‘Their marriage had been a happy one and Mr Turpin had been, in the words of his wife, a good and loving husband.

‘Joan Turpin’s health deteriorated and by September of last year she had lost her eyesight.

‘The evidence suggests to me that Mr Turpin was too proud to ask extended family for help. He had some limited home care support.

‘In short his wife Joan was entirely dependent on Mr Turpin for her care in a significant way.’ 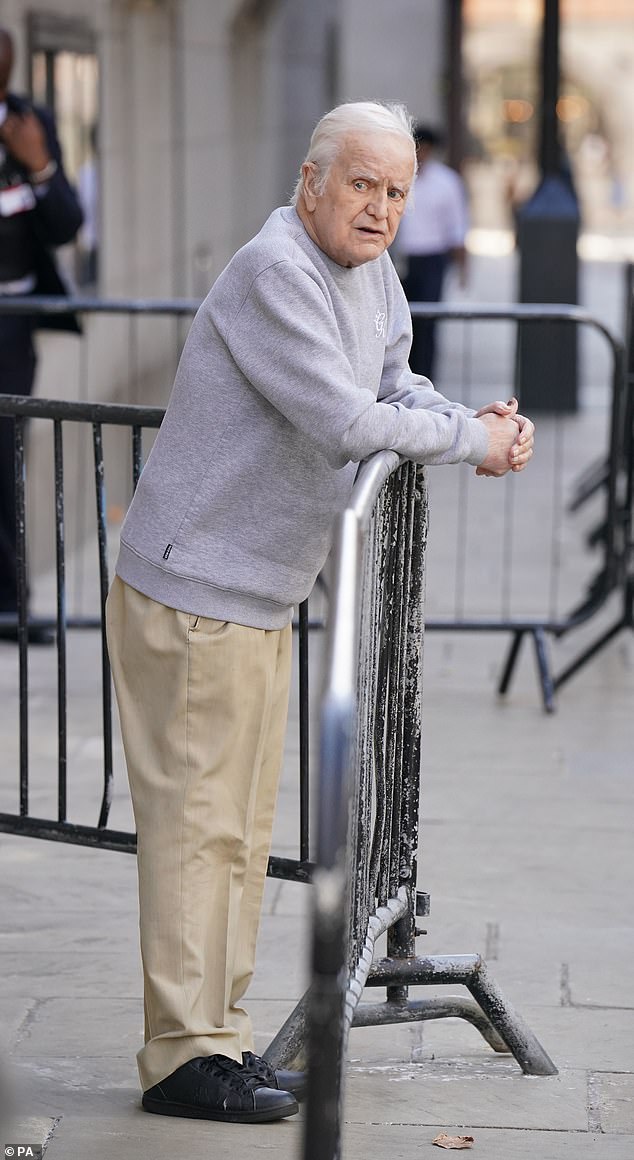 The Smithfield butcher denied and was cleared of attempted murder and an alternative charge of causing wounding with intent.

Turning to the incident, the judge went on: ‘At approximately 1:30 in the morning of 22 September last year Mr Turpin stabbed his wife.

‘He told the jury that he had woken to his wife uncontrollably screaming…[and] had gone downstairs to find a knife to try and scare her and quieten her down.

‘I am driven to the conclusion that Mr Turpin was acting under incredible stress.

‘Otherwise there is no sensible explanation…for attacking the person who you hold most dear.

‘It is quite clear that Mr Turpin was overcome by the stress and responsibility of looking after his wife.

‘In the early hours of the morning when things often seem extremely bleak and hopeless Mr Turpin armed himself with a knife.’

Judge Durran added that there had been no victim personal statement from Mrs Turpin. She called it unsurprising given the pensioner’s ‘repeated expressions of love and affection towards her husband of nearly 70 years’.

The court heard Turpin spent over two months in custody after the stabbing and underwent heart surgery earlier this year.

‘The events of that September morning will never arise again,’ the judge said. 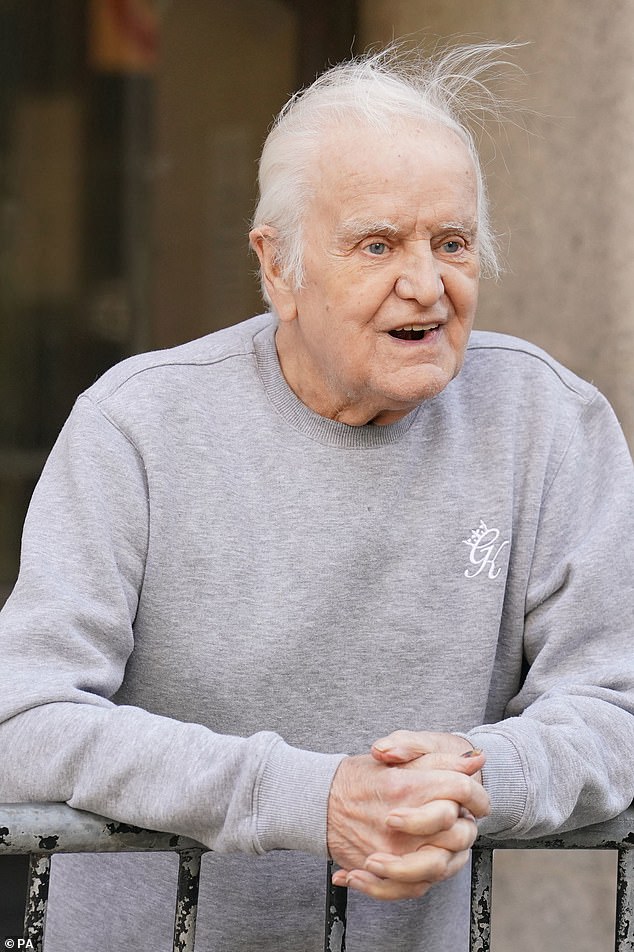 Turpin did not attend his sentencing because he is in hospital as a result of ongoing health complications, the court heard

‘She says the injuries that Joan received as a result of this offence have all healed nicely and Joan Turpin is not in any pain or discomfort,’ prosecutor Alistair Richardson said.

‘She says however that the psychological impact on Joan Turpin is huge. She misses Edward Turpin dearly and her whole world has been turned upside down.’

As Mrs Turpin’s health declined, she lost her sight and she needed a catheter.

Her husband, who had no previous convictions, was her main carer and she was totally dependent on him.

She adored her husband and told police he was a ‘lovely man’.

‘Absolutely wonderful. Never ever did he put one finger on me,’ she said.

‘I think he was a wonderful man. No one has anything bad to say about that man.’

But Mrs Turpin thought her husband might have been stressed about coping with her blindness and urged him to seek help to take care of her.

‘I asked him to get more help because I knew it might get him down,’ she said. 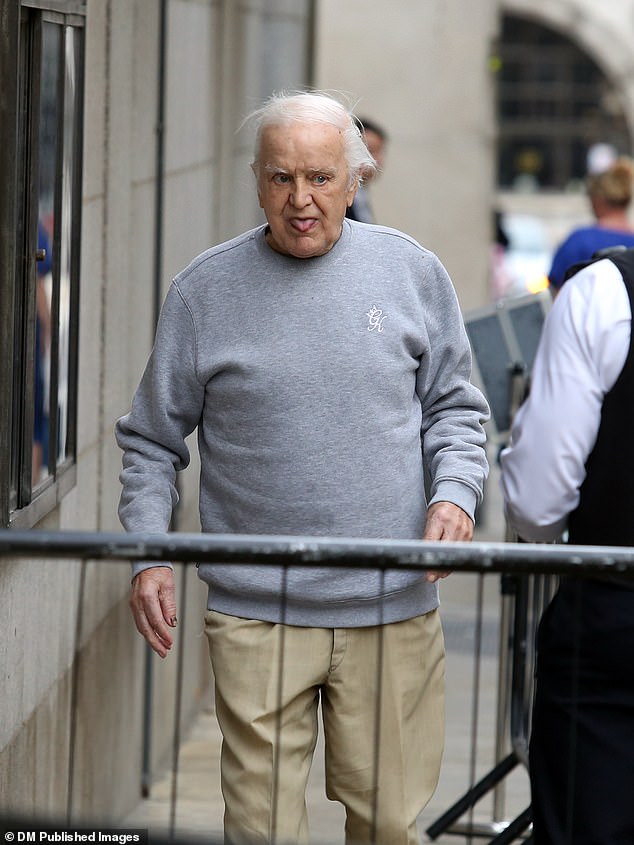 Mr Richardson earlier described it as a sad case of ‘a happy marriage that has become mired by poor health, and with the defendant no longer able to cope with caring for his wife’.

He added: ‘What neither society, nor the law, permit, even in the heat of the moment, is for us to take matters into our own hands, and seek to end someone else’s life.

‘The answer to finding caring for our partner too much can never be to try to take their life.’

‘At about 1:30 in the morning, on 22 September 2021, the defendant ran out of patience with his wife’s ill health, and his caring responsibilities, and he attacked her in her bed.’

Mrs Turpin suffered two stab wounds to the chest and two to her upper abdomen.

The injuries to her chest caused her right lung to collapse.

After the attack, Turpin called the emergency services and said: ‘I can’t take any more of it…she’s been ill and it’s got right on top of me.’

He said: ‘I tried to stab her and I’ve stabbed myself.’

Turpin said he had stabbed his wife ‘by her heart’.

The stabber hung up only for the operator to call again. This happened twice.

During the third call, Turpin said: ‘I don’t want nothing done now. I want to die. She wants to die.’

She can be heard in the background crying out for help while Turpin shouts, ‘Joan, stop it,’ in response to her cries.

Police officers and paramedics went to the house and Mrs Turpin told officers that her husband had stabbed her.

Her husband was downstairs and speaking to other officers at the same time, explaining: ‘I’ve had enough. I just can’t stand no more.’

Giving evidence at trial, Turpin accepted that he stabbed his wife but insisted it was to calm her down after she woke up ‘screaming and shouting uncontrollably’.

He told jurors he was a butcher and that he grabbed the ‘carver’ knife from his kitchen in order to ‘keep her quiet’.

Turpin insisted that he could not remember the stabbing and that he did not do it with the intention to kill.

He said the ‘last thing’ he would ever want to do is harm his wife.

‘We’ve had 60 good years and that’s all I wanted to do was carry on life.’ 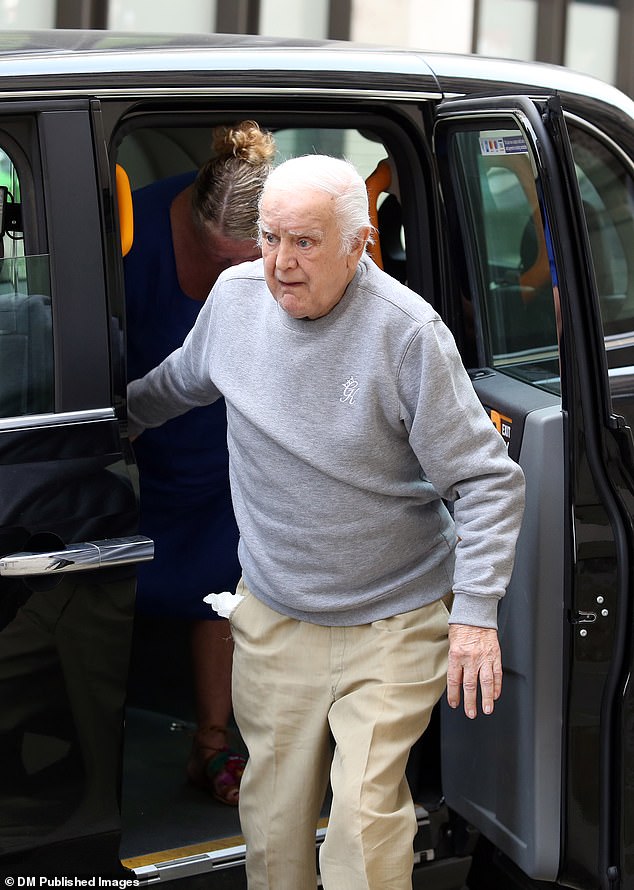 As Mrs Turpin’s health declined, she lost her sight and she needed a catheter so her husband, who had no previous convictions, was her main carer and she was totally dependent on him

Asked if he wanted to cause her ‘really serious harm’, he replied: ‘What’s the good of me causing my wife serious harm? I’ve got no one. No brothers, no sisters, no aunts, no uncles.

‘Without my wife I’m finished.’

He added that Turpin had wanted to plead guilty to wounding, the charge which he was ultimately convicted of, before trial but the prosecution had refused.

‘In September of last year, 60 years of happy marriage were turned upside down by Mr Turpin’s actions,’ Mr Gledhill said.

‘He is acutely aware of the impact his actions had on his wife and on their marriage and expressed to me, frequently, overwhelming regret that those consequences were caused by his actions.

‘He has expressed on more than one occasion a strong desire to give his wife a hug and tell her that he is sorry.

‘I hope that [after] everything the court has seen of Mr Turpin…the court will accept that remorse as absolutely genuine on his part.’