Pubs, hotels and restaurants now have a record 176,000 job vacancies – double since before Covid – as venues are forced to close or reduce their opening hours

Pubs and restaurants in Britain are facing a recruitment crisis after the number of job vacancies hit a record 176,000 – double since before Covid.

There are 1.29million job vacancies across all sectors of the UK economy between April and June this year, according to the latest figures from the Office for National Statistics (ONS).

Hospitality accounts for 13 per cent of the national total despite companies – including Beefeater, Brewers Fayre and Premier Inn owner Whitbread – hiking their staff wages in an industry-wide rush to claw back staff.

The lack of staff has subsequently forced venues to close on quiet days or reduce their opening hours, reports The Sun.

The figures rose by 10,200 since the last recorded figures and UK Hospitality boss Kate Nicholls said the statistics were ‘concerning’ as Britain enters its busiest summer holiday period in a decade. 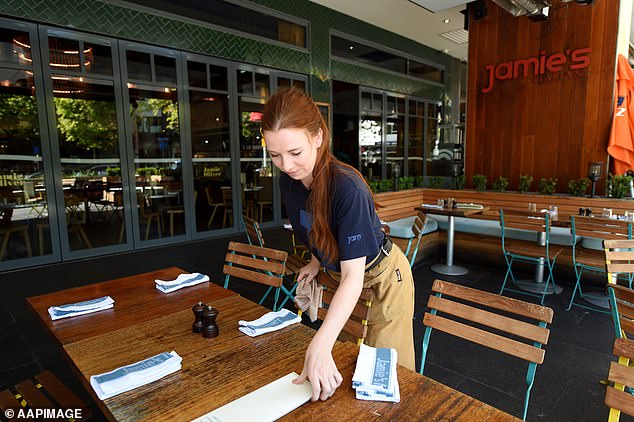 Pubs and restaurants in Britain are facing a recruitment crisis after the number of job vacancies hit a record 176,000 double since before Covid (stock image)

She said: ‘These figures show that the hospitality industry continues to return to growth and is attracting new people into the workforce.

‘However, high vacancy rates are impeding our ability to trade. This is particularly concerning as we enter the summer, a key trading period for much of the sector.’

Last month, Whitbread warned its annual costs will rise by up to £30million due to the pay increases, which are expected to apply across the board. Currently, workers in the firm’s kitchens are paid between £9.98 and £10.60 an hour.

There are now 170,000 vacancies across the hospitality sector, according to the latest figures from the Office for National Statistics (ONS).

In April 2022, weekly earnings were 15.1 per cent higher than a year earlier – against a 9 per cent rate of inflation. This is the highest wage growth of any sector, and means hospitality is one of the few parts of the economy seeing real wage increases. 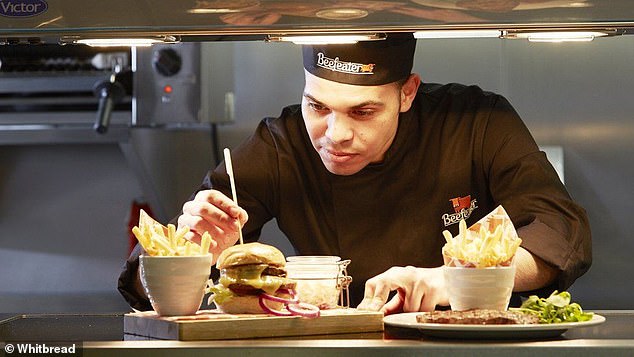 In April, Wetherspoons revealed a 20p pay boost for workers, which took them above £10 for the first time. The National Living Wage is currently £9.50.

Chefs’ wages across the industry are up by 7 per cent this year to £9.58 an hour.

Prospective head chefs in pubs have been offered salaries of as much as £50,000, the Morning Advertiser reported after analysing job adverts.

Whitbread said UK demand was ahead of its expectations, with first-quarter accommodation sales 31 per cent ahead of the pre-pandemic levels two years ago, and 235.6 per cent ahead of a year earlier when restrictions affected trading.

‘Assuming that consumer demand and occupancy remain strong, we expect some additional costs due to targeted pay increases,’ a spokesman said.

‘We are also taking the opportunity to bring forward our investment in refurbishments and maintenance projects as well as accelerate some additional IT spend that will underpin our market-leading position and drive future earnings.’ 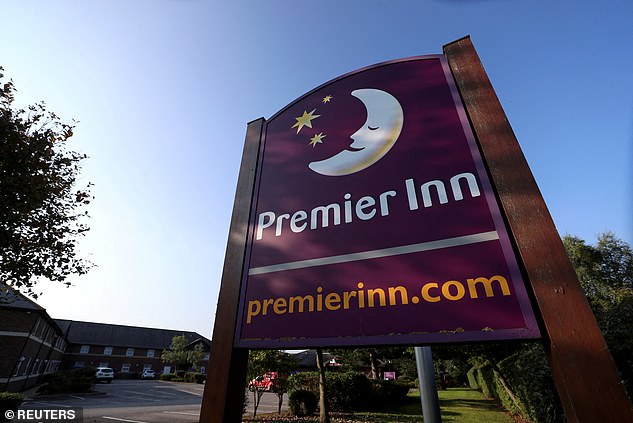 Official figures released yesterday showed that vacancies in the hospitality sector jumped to a record high of 174,000 last month as businesses face the possibility of staff shortages over the key summer season.

British hospitality businesses recorded 83 per cent more vacancies over the three months to May than over the same period in 2019, before the pandemic struck.