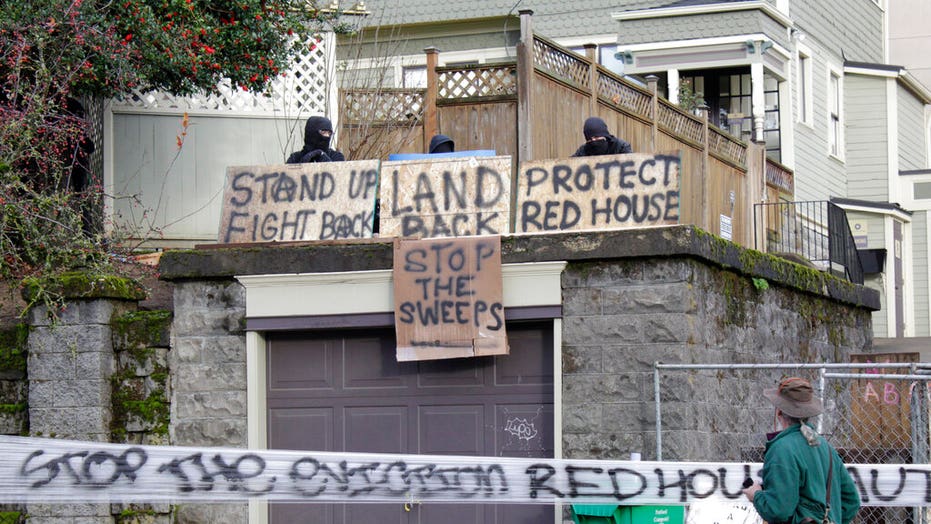 The police chief in Portland, Ore.,  wants demonstrators attempting to block the eviction of a Black and Indigenous family to put down their weapons and leave the barricade so that the standoff with officers can end and the neighborhood can return to peace and order.

The chief said that police intend to enforce the law and will use force to restore order to the neighborhood.

"It can be avoided with those participating ending it peacefully by putting down their weapons and leave the barricade," he said. 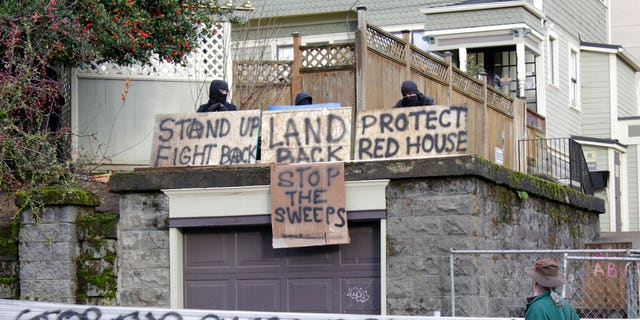 Masked protesters by an occupied home speak with a neighborhood resident opposed to their encampment and demonstration in Portland, Ore., on Wednesday, Dec. 9, 2020.
(AP)

The chief's Wednesday remarks were made after protesters clashed with police over the family’s eviction from the home in a residential neighborhood in Portland.

The occupation of the home began in September after a judge rejected the Kinney family’s request for an emergency stay. But tensions with authorities boiled over on Tuesday when police officers responding to the new owners' complaints conducted a dawn sweep and arrested about a dozen people.

Members of the Kinney family and their supporters gave a press conference outside the home Wednesday afternoon appealing to the public for support.

“Help us occupy this land,” said Ragina Rage, a community activist who spoke. “Help us do this so that we can protect other families that they’re going to do this do. They will target other Black and Brown families because of the anti-Blackness that exists within this … system.”

Several city blocks remained closed Wednesday by a series of blockades made with wood, metal and wire fencing. Protesters dressed in black and wearing ski masks stood watch from atop a nearby wall.

The street behind the blockade in the residential neighborhood of homes, coffee shops and restaurants was laced with booby traps aimed at keeping officers out, including homemade spike strips, piles of rocks and thick bands of plastic wrap stretched at neck-height across the roadway.

“Portland Police share the community’s concern about the barricades, occupation and criminal activity, on North Mississippi," Lovell said. "Those present at the barricades should leave it behind, put down your weapons, and allow the neighborhood to return to peace and order.”

The police chief said that neighbors of the occupied house have suffered for weeks, and their suffering has only “grown worse.”

Police said on Tuesday that between Sept. 1 and Nov. 30, there have been more than 80 calls for service to the property for fights, gunshots, burglary, vandalism, and noise complaints, among other things. They said that neighbors have also complained that the sidewalks were blocked, and they could not access their own homes.

The 124-year-old house is known locally as the Red House on Mississippi and was one of the few remaining Black-owned homes on North Mississippi Avenue.

According to a history posted online by the group protesting the eviction, the property belonged to the Kinney family since the 1950s and was initially purchased in full with cash. But the family took out a mortgage to pay defense lawyers after a 17-year-old son was arrested in 2002 after a traffic crash. He pleaded guilty to assault in a plea deal, according to court records.

The new loan was resold several times after the housing crash of 2007-2008 and the house was sold to Urban Housing Development LLC at auction in 2018 — but the Kinneys kept living there, according to court papers.

The developer sued in 2019 and the Kinneys counter-sued, arguing that illegal and predatory bank tactics cost them their home. They later filed a motion for an emergency stay that allowed them to stay in the house while the coronavirus pandemic was raging. In September, a judge rejected the stay and ordered the family out. Protesters began an occupation of the property shortly after that decision and have been there ever since.

EasyJet plans to reduce its workforce by up to 30%

Alfred Kinsey and the eccentric sex letters he got from Britons