New Jersey authorities say they have arrested 21 people as part of “Operation Screen Capture” — a monthslong crackdown on child sexual abuse over the Internet during the coronavirus pandemic.

Those arrested include a woman and a juvenile male, with ages ranging from 15 to 71, according to the New Jersey Office of the Attorney General.

“Reports to our Internet Crimes Against Children Task Force of potential predatory conduct against children are up as much as 50 percent during the COVID emergency as homebound children, starved for outside contact, spend more time on their devices, and opportunistic sexual predators target them online,” Attorney General Gurbir Grewal said in a statement. 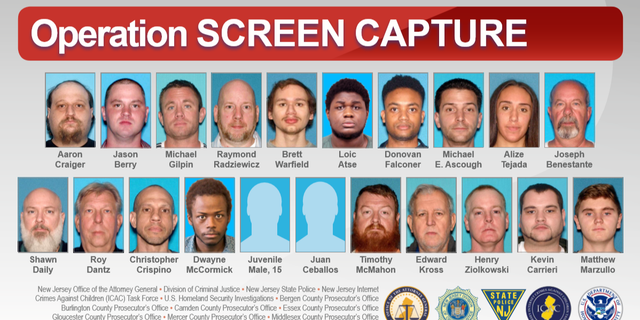 The alleged child sexual predators arrested in the sweep. (New Jersey Office of the Attorney General)

“We urge parents to be vigilant about the online activities of their children and warn children that the strangers they meet on popular social media sites, apps and gaming platforms may be out to harm them,” he added.

One suspect was identified by authorities as Aaron Craiger, a registered sex offender from Oklahoma who was taken into custody in late March after he allegedly traveled to a motel in Atlantic City “to meet two men who offered him access to underage girls for sex.”

But the office says the men Craiger allegedly was engaging with were undercover investigators with the state police and U.S. Homeland Security, and that the 34-year-old had condoms in his possession when he was arrested.

Another suspect, Jason Berry, 40, of Keansburg, is accused by the attorney’s office of manipulating a 14-year-old girl he met on social media “into sending him naked pictures of herself engaging in sexual acts.”

He had the girl carve his initials into her legs and – after tricking her into revealing her mother’s cell phone number – sent the images to that phone, prosecutors are alleging.

The woman, identified as 21-year-old babysitter Alize Tejada of Newark, allegedly filmed herself performing a sexual act on a “very young child” and then posted the video on social media, according to the attorney’s office.

“Our children are at an increased risk to fall victim to opportunistic online predators during this pandemic, as students have no choice but to turn to their devices to connect with friends and family and in many cases to prepare for remote learning,” warned Colonel Patrick J. Callahan, superintendent of the New Jersey State Police.

Those who are convicted face sentences of up to 20 years in state prison and fines of up to $200,000, depending on the degree of the charge.

Pope tells Biden he prays God will guide reconciliation in US