The NHS Test and Trace app may have prevented around 284,000 Covid infections between October and December, a study suggests.

Research by the University of Oxford found between 100,000 and 900,000 cases in England and Wales were prevented by the app’s exposure notifications.

The study said the contract tracing app sent around 1.7million exposure notifications in the last three months of 2020, as a result of 560,000 app users testing positive.

It estimated around six per cent of app users that receive a close contact notification will go on to report a positive test themselves — a similar rate to manual testing.

The NHS Covid-19 app uses Bluetooth on smartphones to keep an anonymous log of other app users that an individual comes into contact with, informing them if they have been near someone who tests positive for the virus and what to do next.

It has come under severe criticism since it was first introduced in September last year.

The risk threshold on the app was set too high from then until November, resulting in ‘shockingly low’ levels of alerts being issued during the period.

A proposed update to app which would have pooled location data and given it to health officials was delayed last month because it breached Apple and Google’s privacy guidelines.

The study comes after it was announced yesterday that the app will be used for the controversial vaccine passports allowing inoculated people to travel from next Monday. 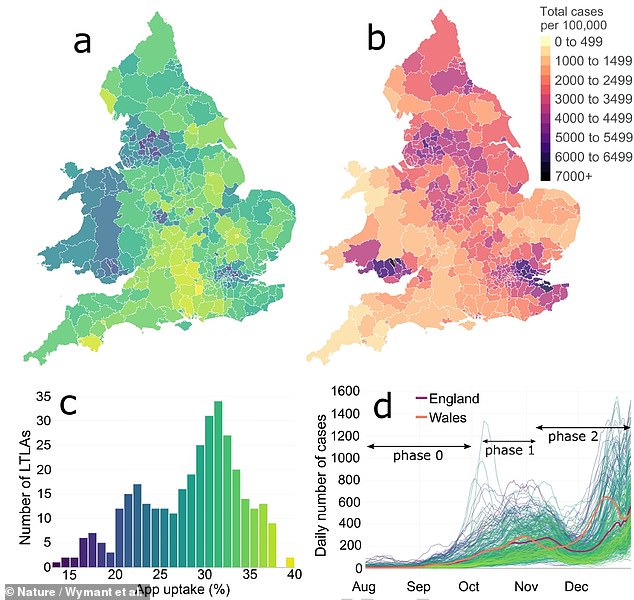 The NHS Test and Trace app may have prevented around 284,000 Covid infections between October and December, a study led by the University of Oxford has suggested. Pictured: Maps show app uptake (left) and infections per 100,000 during the time period (right) while graph show how many local authorities took up the app at each percentage point (left) and how cases changed over time (right) 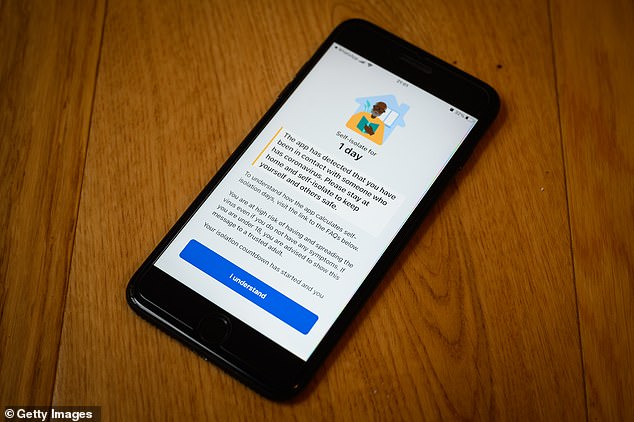 The NHS Covid app (pictured)uses Bluetooth on smartphones to keep an anonymous log of other app users that an individual comes into contact with, informing them if they have been near someone who tests positive for the virus and what to do next 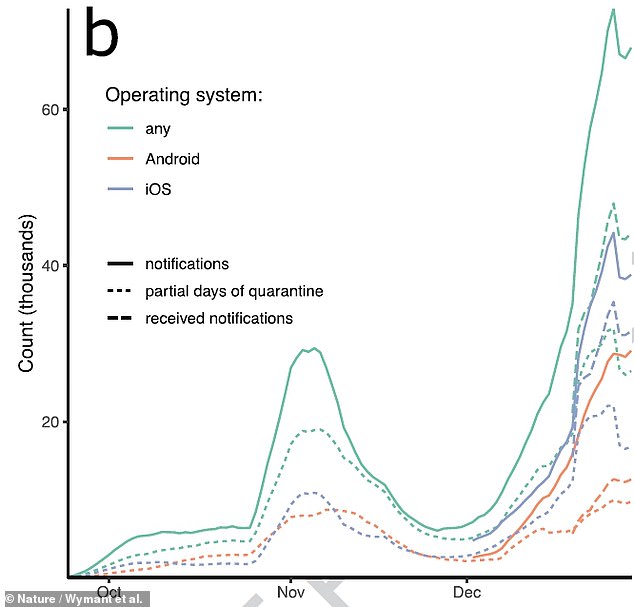 The study said the contract tracing app sent around 1.7million exposure notifications in the last three months of 2020, as a result of 560,000 app users testing positive

For each encounter with an infected person, a score is generated.

This score is based on a series of equations.

The first aspect is how long a persons pent within one metre of the infected patient. This is inputted unaltered into the algorithm.

Time spent more than one metre but less than two meters away is also used, but is divided by the square of the distance.

Each individual interaction is added up over the course of the day.

For example, if it is a work colleague who you interact with four times, each of the four interaction scores is added up to give a daily total.

This dai;y total is then multiplied by a factor depending on how infectious a person was when the encounters occurred.

The number it is multiplied by will be larger if it is the first day a person has symptoms, compared to a week afterwards.

Should this score exceed 120, a person will now be told to self-isolate.

Using a mathematical model, the study estimated the probability that notified contacts would be infected and quarantine quickly, predicting between 108,000 and 450,000 cases of Covid were averted — with 284,000 given as a mean number.

They also compared areas with similar demographics but with differing levels of app uptake, which also showed the number of cases averted increased as app uptake went up.

The authors suggest that although the two estimates differ they agree in the sense that the contact-tracing app holds value in reducing virus transmissions.

Their research also found that the average number of contacts traced by the app was more than double that of manual contact tracing, but the two systems can be complementary as they could help trace different contacts.

Dr Chris Wymant, a member of Oxford University’s Big Data Institute, led the research, which was published in the science journal Nature.

The authors wrote: ‘We estimated that for every percentage point increase in app users, the number of cases can be reduced by 0.8 per cent (modelling) or 2.3 per cent (statistical analysis).

‘These findings provide evidence for continued development and deployment of such apps in populations that are awaiting full protection from vaccines.’

It comes after Downing Street yesterday announced the app would also be used to display vaccination status from next week, instead of being limited to just venue check-ins and contact tracing.

Official guidance from the Government published online states: ‘You can access your Covid-19 vaccination status through the free NHS App from May 17.

‘You can access the app through mobile devices such as a smartphone or by tablet.

‘Proof of your Covid-19 vaccination status will be shown within the NHS App. We recommend you register with the app before booking international travel.

‘Demonstrating your Covid-19 vaccination status allows you to show others that you’ve had a full course of the Covid-19 vaccine when travelling abroad to some countries or territories. A full course is currently two doses of any approved vaccine.’

The NHS contact tracing coronavirus app , called NHS Covid-19, is based on  a piece of software, an API, built by tech giants Apple and Google, who came together in an unprecedented alliance at the start of the pandemic.

It works via Bluetooth, which is fitted to almost every smartphone in the world, and involves a notification system to alert people if they have been in close proximity with someone diagnosed with Covid-19.

Apple and Google let the NHS determine what it deems to be suitable exposure for a a person to be considered at risk for infection.

The NHS set the limit as within 2m for 15 minutes.

However, Apple and Google have openly said the app is not perfect, due to the fact Bluetooth is being used for something it was never designed for.

Therefore, phones with the app installed can struggle to tell exactly how far away another device is.

Although the threshold is set at 2 metres, it emerged in early trials that people as far away as 4m were told thought by the technology to be less than 2m away.

Officials say that about 30 per cent of people told to self-isolate may have been more than two metres away from a positive case.

Apple and Google have been aware of this issue since the inception of the project and have recently revealed they have used hundreds of different devices to help calibrate the system.

It is claimed the NHS app is more accurate than other contact tracing apps around the world which also use the Apple and Google API.

All the technology for the app is done in the phone itself, and no external servers are used, helping protect user data.

No location or personal data is sent to Apple, Google or the NHS and all interactions between phones are anonymous.

The randomised and untraceable links are only stored for two weeks on the phone itself before being permanently deleted.

A person can also choose to wipe their data clean, either in the app’s settings or by deleting the app.

In a conference call this week, representatives from both Google and Apple said the app is not intended to replace manual tracing, but to enhance it.

They added that, in the tests done in-house during development, 30 per cent of the exposure notifications that were triggered were not picked up by manual contact tracing.

For a person to receive am infection notification via the app, both they and the infected person must both have had the app at the time of their interaction.

During this interaction, on a bus for example, the phones acknowledge the device has met the 2m/15 min criteria.

The devices then automatically exchange anonymous ‘keys’ with each other via Bluetooth. The keys randomise and change approximately every 15 minutes.

If a person then receives a positive test, they receive a unique PIN from the NHS and input this in the app.

Once they have done this, all the anonymised keys from the phone of the infected person are added to a cloud database.

Every app is constantly checking in with the same cloud database to see is any of the ‘keys’ it has come into contact with match the keys of positive tests.

If a person’s phone finds a match, that person then receives a notification informing them they have been exposed and may be infected.

The app then provides that person with detailed information from the NHS on the next steps.

The mobile data needed for the app to work is being allowed free of charge in the UK by network carriers and it is believed the app has negligible impact on battery life.