The oil spill disaster off Mauritius turned deadly this week when a tugboat leaving the shipwreck collided with a barge and sank, killing at least three sailors, police said Tuesday.

The tug – called the ‘Sir Gaetan Duval’ – was towing the empty barge from the stranded hull of the Japanese ship, the MV Wakashio, on Monday night when heavy seas rammed the barge into the tug.

It sank off the northeast coast of the Indian Ocean island nation, near a village called Poudre D’or, as it led the barge to Mauritius’ capital Port Louis.

‘It is a terrible twist in this disaster,’ environmental consultant Sunil Dowarkasing told The Associated Press. ‘The consequences of the shipwreck has now taken human lives. The cost of the oil spill keeps mounting.’ 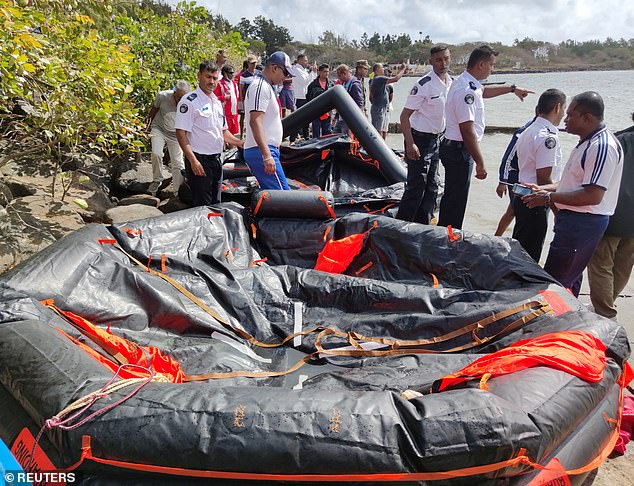 Pictured: Coastguards prepare for a search and rescue operation near the scene where a tugboat involved in cleaning up an oil spill from the MV Wakashio, a Japanese bulk carrier, collided with a barge during bad weather, in Poudre d’Or, east of Mauritius September 1 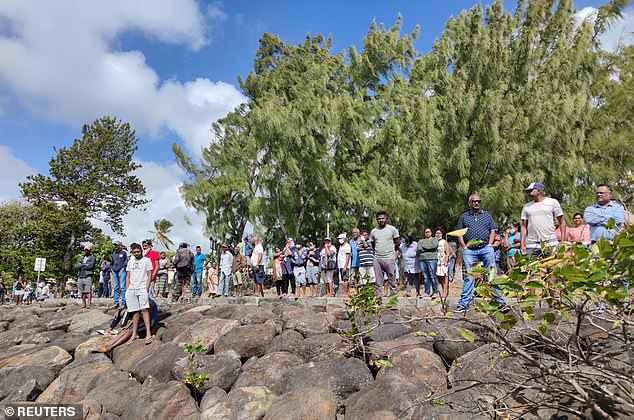 Residents gather near the scene where a tugboat involved in cleaning up an oil spill off from MV Wakashio, which has become a national disaster for the island nation of Mauritius, a small island in the Indian ocean 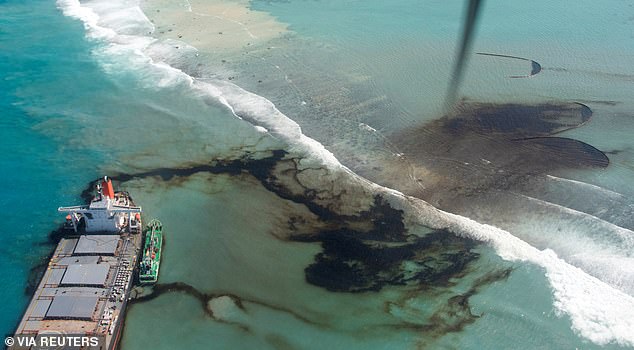 The tugboat sank in deep water outside a coral reef and so far no oil has been seen on the coast, Dowarkasing said.

The environmental disaster began on July 25 when the bulk carrier Wakashio strayed miles off course and struck a coral reef a mile offshore.

After being pounded by heavy surf for nearly two weeks, the ship’s hull cracked and on Aug. 6 it began leaking fuel into the Mahebourg Lagoon, polluting a protected wetlands area and a small island that was a bird and wildlife sanctuary.

More than 1,000 tons of fuel spilled into the coastal waters. About 3,000 tons remained on the boat and was pumped into barges before the Wakashio broke in two several days later. 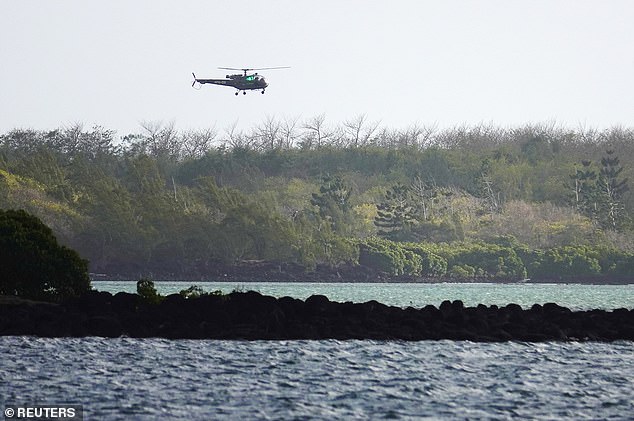 Pictured: A coastguard search and rescue helicopter hovering near the scene where a tugboat involved in cleaning up an oil spill off from MV Wakashio. Three sailors are said to have died, with one still missing. Four have been rescued 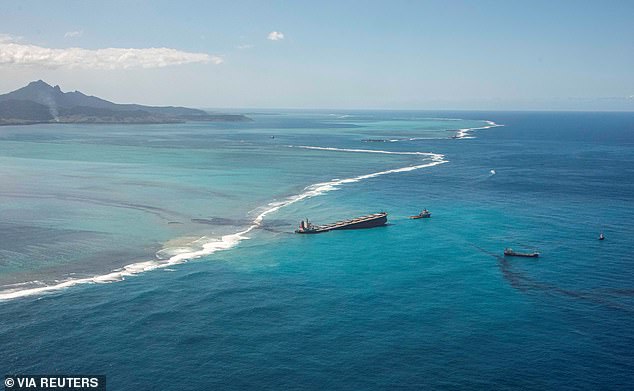 More than 1,000 tons of fuel spilled into the coastal waters. About 3,000 tons remained on the boat and was pumped into barges before the Wakashio broke in two several days later

Environmental workers carefully ferried dozens of baby tortoises and rare plants to shore, plucking some trapped seabirds out of the goo.

Dead dolphins began washing up on the coast last week. So far 47 dolphins and three whales have been found, Dowarkasing said.

An initial autopsy by a government laboratory said oil was not the cause of the deaths, but few Mauritians believe that, Dowarkasing said.

The government of Prime Minister Pravind Jugnauth is under pressure to explain why immediate action was not taken when the ship first ran aground. He has blamed bad weather for the government´s apparent inaction.

Tens of thousands of people marched in the capital on Saturday in protest, calling on top officials to step down. 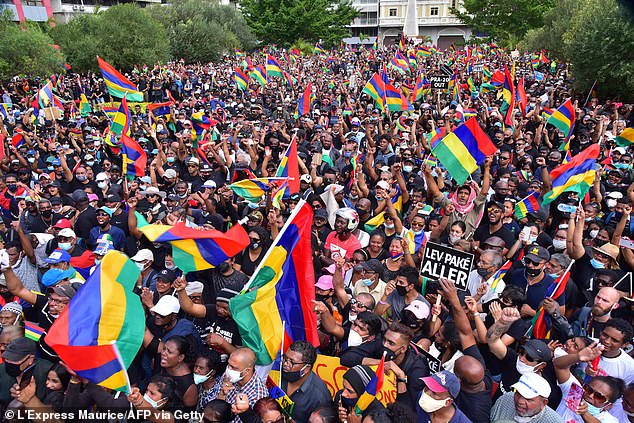 People wave the national flag of Mauritius as they attend a protest against the government’s response to the oil spill disaster. Critics say the government were too slow to react 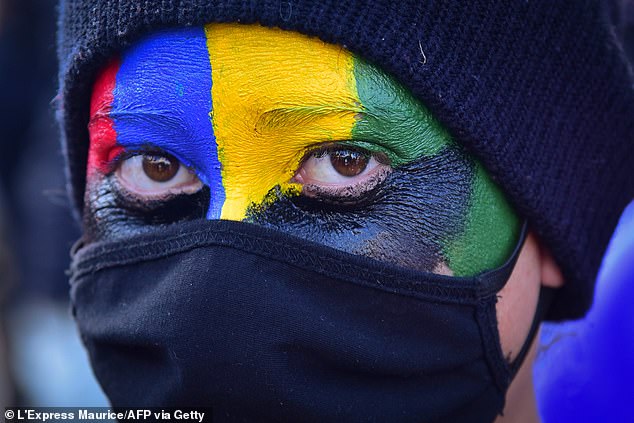 The major oil spill caused by a Japanese ship may pose a long-term threat to the region’s ecology, including to the Indian Ocean island’s delicate mangroves, and its tourism 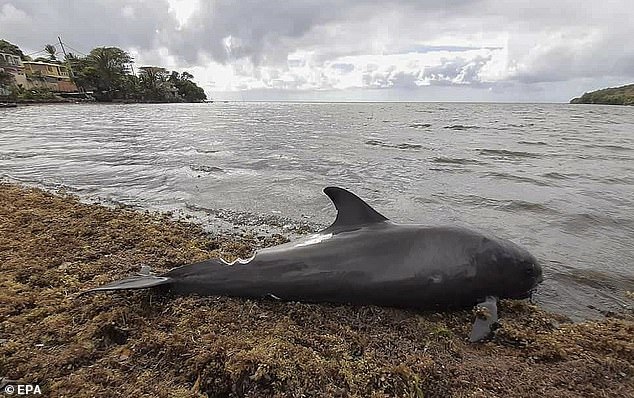 Greenpeace has called for an investigation. The long-term impacts of the oil spill will likely affect whales, turtles, seabirds and much of the marine life in the area, Greenpeace warned

The ship’s captain and first officer have been arrested and charged with ‘endangering safe navigation,’ and several investigations are underway.

The Japanese-owned vessel’s black box is being examined, and crew members are now facing questions about why the vessel, which had been heading from Singapore to Brazil, was so near to the shore.

A maritime official with knowledge of the incident, who asked not to be named, said last month the crew had been questioned about reports they were having a birthday party on board, but added it was not clear yet if the party had been held at the same time that the ship ran aground or earlier in the day.

The captain, identified by police as Sunil Kumar Nandeshwar, 58, and his first officer were charged with endangering safe navigation and appeared at court in Port Louis, a police spokesperson said.

The Mauritius coastguard had repeatedly tried to reach the ship to warn that its course was dangerous but had received no reply, the maritime official said.

‘The route set five days before the crash was wrong and the boat navigation system should have signalled that to the crew and it seems the crew ignored it. 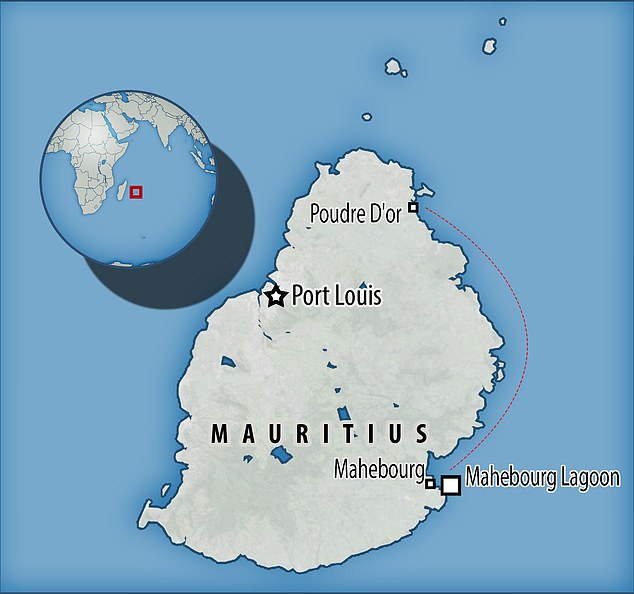 The tug was reportedly taking a barge from the Mahebourg lagoon, the site of the crashed oil tanker, to the capital of Mauritius. However, heavy seas caused the barge to crash into the tug near Poudre D’or, causing it to sink 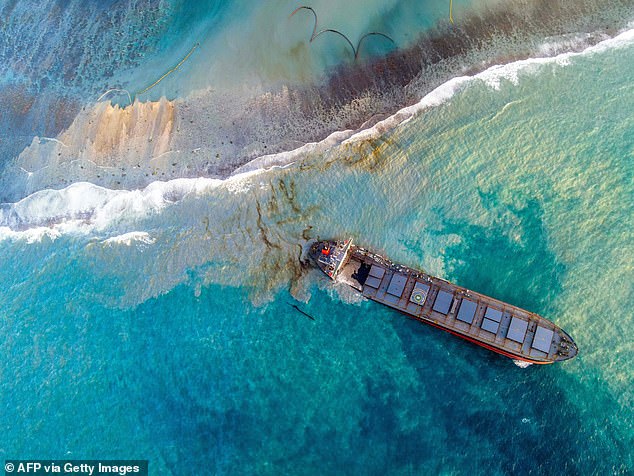 An aerial view taken on August 15, shows the vessel MV Wakashio as it starts to break up after it ran aground on a coral reef in the lagoon off the coast of Mahebourg (pictured in map above)

‘The boat did also fail to send out an SOS (when it ran aground), and did not respond to attempts by the coastguard to get in touch,’ the official said.

The official confirmed that the crew had been questioned about reports they were having a birthday party, and denied media reports that the ship had sailed close to land seeking a Wi-Fi signal, saying that looking for a phone signal would not have required sailing so close to land.

A national television network had reported that the captain told the court the ship was sailing coastline to get a phone signal, something he had done before when sailing through those waters.

He was not in charge of the ship at the time, he said, the ship was not on autopilot and there was bad weather, according to the report.

Scientists say the full impact of the spill is still unfolding but the damage could affect Mauritius and its tourism-dependent economy for decades. Removing the ship is likely to take months.

The official noted it was the second accident in the area in four years and said the government might establish a signal station nearby to try to ward off future disasters.

Mauritius National Crisis Committee said last month it planned to scuttle the ship’s remains at sea at a yet to be determined date. It would do so in a way that would avoid further pollution or interfere with maritime routes, it said in a statement.

Tories on verge of revolt over failure to fix cladding scandal