A woman and her husband have defended their decision to trash a Brazilian dental clinic after bizarrely claiming that the dentist secretly implanted a chip in her mouth three years ago to listen in to their family’s conversations.

The shocking incident was recorded by the Belo Horizonte office after Kênia Aparecida, 27, and her 31-year-old partner showed up requesting to see the dentist Wendesday.

‘In 2019, I started treatment at the clinic through an agreement,’ Aparecida told news outlet G1.

‘I had two wisdom teeth extracted and, without my authorization, they implanted a chip in my mouth and listened to my conversations. But my husband saw that it was in (the mouth) and the dentist doesn’t want to take it out.’ 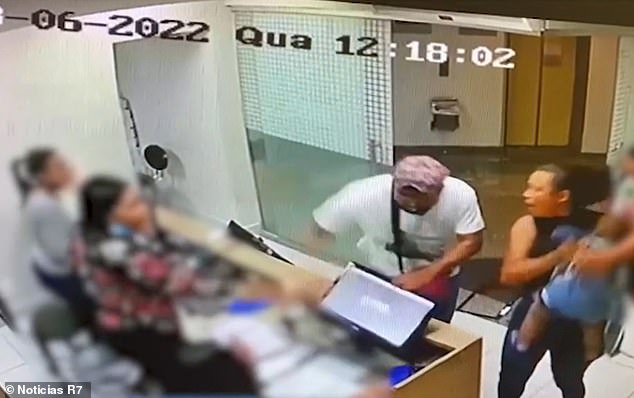 Kênia Aparecida (right) shouts at a dental office employee while her husband (center) removes a computer screen during an argument at the Belo Horizonte clinic on Wednesday as they claimed the dentist had implanted a chip in 2019 during the removal of two wisdom teeth, thus allowing their family conversations to be heard

Surveillance video showed her husband standing by the reception desk waiting to be helped when he suddenly hit one of the computer screens, knocking it over the table ledge.

Aparecida subsequently approached the desk to argue with three employees while she was carrying her toddler child and her husband proceeded to punch a second computer screen, slamming it to the floor.

The couple continued to shout at the office workers as their two older children looked on, grabbing the supplies from the desk and tossing them at the terrified employees.

Aparecida’s husband then charged at door and karate kicking it before he falls to the ground. He stood up and punched a television that was hanging from a wall. 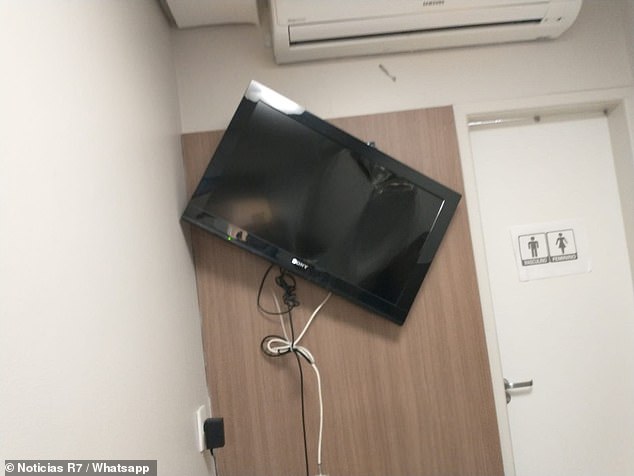 A television was knocked of its wall stand when a couple showed up at a dental clinic in Belo Horizonte, Brazil, on Wednesday to demand that the dentist remove a chip he had allegedly implanted in a woman’s mouth in 2019 after she had two wisdom teeth removed 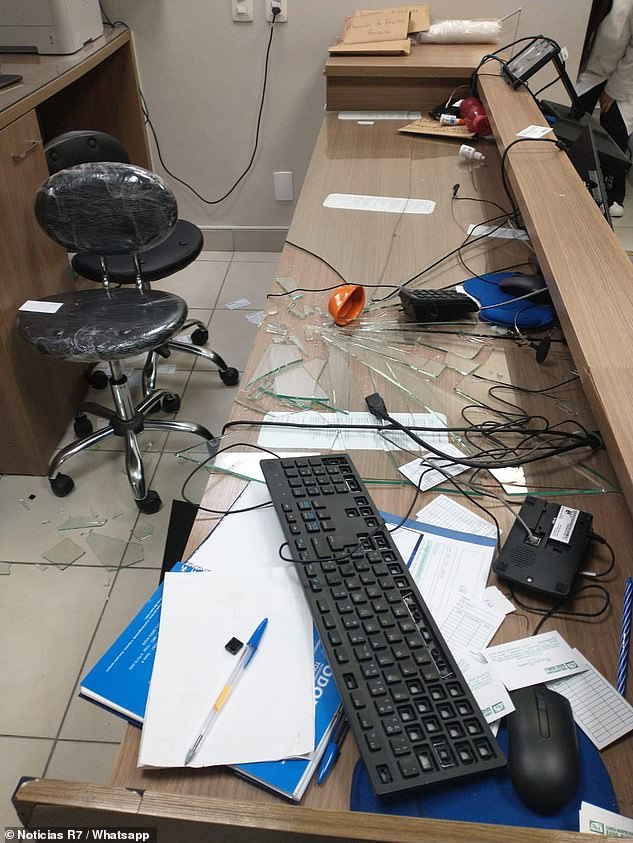 Authorities in Belo Horizonte, Brazil, are still investigating the insane trashing of a dental office clinic by a woman and her husband, who accuse a dentist of installing a chip in her mouth that allowed the dentist and his staff to ‘listened to my conversations’

‘After the chip was implanted, everything that is said in the family’s home, people on the street find out,’ Aparecida alleged.

Her husband said they lost their temple because they had been attempting to had the chip removed on several occasions.

‘We act according to emotions, we just need to take the chip out from her,’ he said. ‘We’ve asked several times and the dentist doesn’t take it out. We tried to talk yesterday (Wednesday) and they didn’t want to hear us.’

Office workers told authorities that Aparecida’s husband threatened them and showed images of a gun he had on his cellphone.

The dental office manager said it was not the first time the couple had visited the clinic in an aggressive manner, complaining that Aparecida had a chip in her mouth. 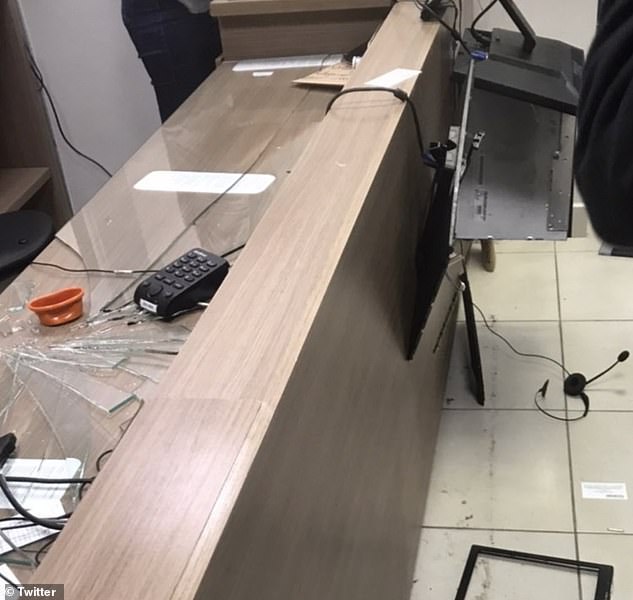 Kênia Aparecida’s (right) husband (center) waits to be assisted at the Belo Horizonte, Brazil, clinic on Wednesday moments before he lost his temple and destroyed the office while arguing with the staff over an alleged chip that was implanted by the dentist in his wife’s mouth during a 2019 visit that permitted the physician and staff to listen in to the family’s conversations. The dental office refuted the couple’s claims, indicating no chip was ever implanted in the woman’s mouth

Despite the X-ray images showing no problem with her wisdom teeth, Aparecida followed through with the removal.

She and her husband returned several days later to complain that the dentist had inserted the chip.

‘They reported that the dentist had placed a microchip inside her mouth, that it was possible to hear all the WhatsApp conversations,’ the office manager said.

The couple abandoned the dental office before the Minas Gerais Civil Police arrived.

An investigation underway although the Aparecida and her husband had not been interviewed as of Thursday.