Home » World News » ‘Look around, the city’s dead’: CBD businesses on the brink after lockdown

On a usual Friday at lunchtime, Pellegrini’s Espresso Bar would have a queue stretching down Bourke Street. But this was no usual Friday.

Inside the empty cafe, staff polished glassware and wiped down the large coffee machine, waiting for customers to arrive. By 12:30pm only 30 people had set foot inside. 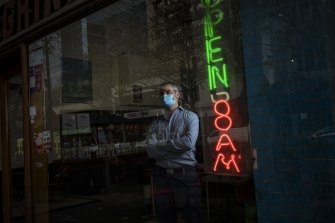 Another lockdown, owner David Malaspina said, could ruin him.

“You can’t do lockdowns any more,” he said. “They’re killing us. Our industry doesn’t survive lockdowns. When they [the state government] scare people out of the city, and actively tell people not to come in, they kill the heart of Victoria, the CBD. They’re killing it.”

Mr Malaspina said he was forced to trash or give away thousands of dollars in stock at the start of the snap shutdown two weeks ago, and any further shutdowns would be ruinous for small businesses trying to climb back from the past 15 months of rolling restrictions. 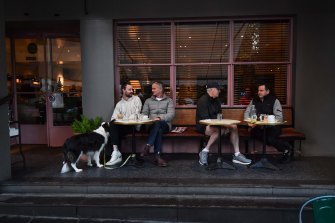 George and Peter Larsen (left) sat down for a coffee at Gilson in South Yarra after restrictions eased on Friday.Credit:Joe Armao

“Obviously we do not want to impose things that are excessive, but it is always under review, because the risk remains until we have run all of this down.”

Friday was the first day in a fortnight Melburnians have been able to shop and dine in person, but on the eve of the Queen’s Birthday long weekend, activity in the central business district was subdued.

With density limits again in place for offices, restricting the number of people inside to 25 per cent of normal capacity, city workers stayed away in droves.

Just 507 people passed by a pedestrian monitor in the Flinders Street Station underpass between 8am and 9am; 28 per cent of the number of commuters registered on a typical day in May.

Compared with a typical morning peak hour in 2019, the number of commuters clocked on Friday morning in the underpass was just 14 per cent of pre-pandemic levels.

It was a similar story at Southern Cross Station.

During a typical Friday morning in May, there would have been eight times more foot traffic in the area than recorded during Friday’s morning “peak” on Friday; in 2019 there were 20 times more people in the area.

Bourke Street Mall had regained some of its buzz, but the courts precinct along and around William Street was eerily quiet. The Metropolitan Hotel and several nearby cafes had signs in their windows announcing they had permanently closed due to COVID-19 restrictions.

At Blackstone Barbers, near the corner of William and Collins streets, every chair was occupied but owner Michael Mawa was pessimistic about the coming days and weeks.

“After next week, can I keep my poor boys on the floor, with 25 per cent [of workers returning] in the city? I don’t think so,” he said.

“We rely on offices. Takeaway, cafes and us – everyone relies on offices. If the offices are not there, it means no business for us.” 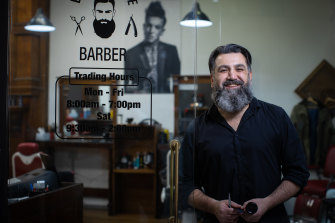 “Look around, the city’s dead. It’s a really sad thing.”

Professor Sutton and acting Premier James Merlino said the lockdown was necessitated by the nature of the outbreak.

“Lockdown four has set Victoria back months in the effort to get office workers back to the CBD and it’s going to be even harder this time round as the depths of winter set in,” he said.

“Now is the time to bring business into the decision making and help with a response to stop the spread without locking down the economy. We are motivated both by keeping the community safe and also keeping as many businesses open as we can.”

Melbourne lord mayor Sally Capp has proposed a lottery system with prizes, such as dining and shopping vouchers for Melburnians who get vaccinated, to encourage more people to get the jab, and to avoid further lockdowns.

Melbourne City Council will vote on the proposal on Tuesday.

The Morning Edition newsletter is our guide to the day’s most important and interesting stories, analysis and insights. Sign up here.