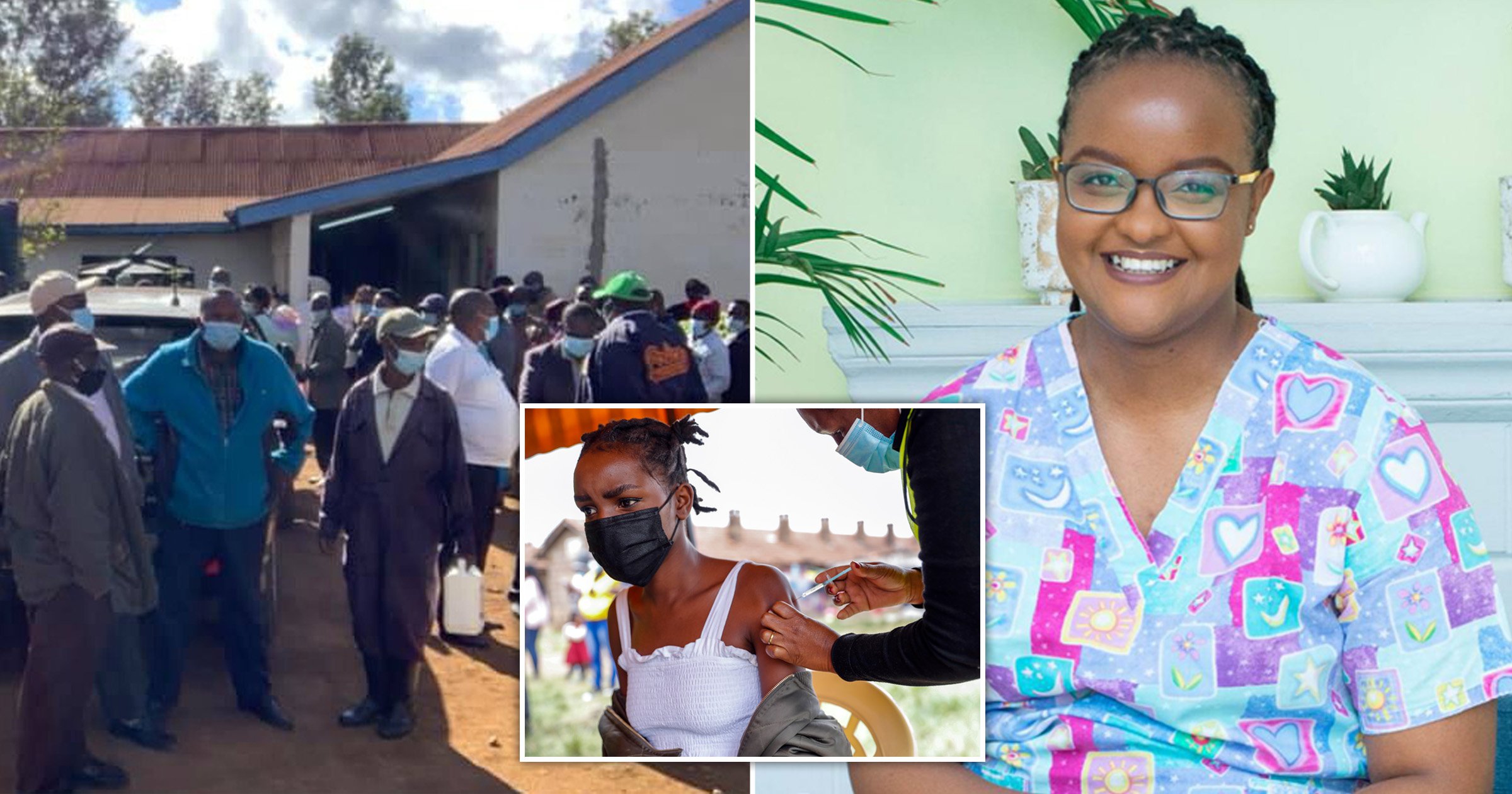 A Kenyan doctor is asking for the world’s richest countries to hold off on booster programmes while poorer countries are struggling to get first doses to citizens.

The NHS has started its booster jab programme today – with NHS and social care staff, clinically vulnerable people and over-50s first in line. But GP Marie-Claire Wangari, 27, believes those doses should instead be sent to countries such as Kenya which are still trying to get an initial round of jabs out.

Kenya has fully vaccinated just 1.6% of its population while the UK has double-jabbed 66.09% of its people. At Kenya’s current rate of vaccination, it will take an estimated 324 days to innoculate just 10% of its population.

This means the East African country will continue battling its deadly fourth wave, spurred on by the Delta variant, pretty much unarmed.

Just yesterday 21 Kenyans died from the virus, while the nation hit a record high death toll of 213 fatalities in the second-last week of August (22-28). Even so, Kenya’s figures are expected to be higher than what has been officially recorded.

Dr Wangari told Metro.co.uk: ‘I understand every country means well for their population. But on my side, I feel sad because I’m thinking about that grandmother who really wants to get the vaccine, has tried countless times going to her closest facility and she’s told they don’t have vaccines.

At Nazareth Hospital just outside of Nairobi, where Dr Wangari works, people trying to get the vaccine are often turned away because there are no doses to give.

People were able to get jabbed at the hospital for the majority of April but then supply became sporadic and doses were only available for the equivalent of two weeks in June, one week in July and two-and-a-half weeks in August.

In a knock-on effect, the lack of vaccines at some hospitals often leads to crippling queues at facilities where doses are available.

Even Dr Wangari, who was prioritised for vaccination as a healthcare worker, had to miss a day of work and go to a different hospital for her first jab on March 25 – where she waited in line for six hours – from 9am to 3.30pm.

While she acknowledged there are many reasons for Kenya’s lagging vaccination rollout, including the country’s infrastructure and corruption, Dr Wangari believes the West ‘hoarding vaccines’ is a big contributor.

‘It’s good to have the needs of your citizens at heart but it’s also good to think on a global level,’ Dr Wangari said.

Local doctors are not the only ones who think this. The UK’s Commonwealth Secretary-General, the Right Honourable Patricia Scotland QC, has said global vaccination is the best way to fight this pandemic.

Her department told Metro.co.uk: ‘We continue to see the stockpiling of vaccines by high-income countries and, more recently, of countries embarking on booster doses.

‘There is no quarantine policy, public health programme or vaccination rate that can protect our populations nearly as well as eradicating the virus from all our countries through a concerted and coordinated drive for equitable vaccination.’

Before vaccination started, WHO tried to ensure every participating country could jab at least 20% of their population – through equitable distribution via COVID-19 Vaccines Global Access (Covax).

But richer countries were able to secure more doses for their own people by providing funding to pharmaceutical companies and buying jabs in advance – and this is believed to have sent most of the world’s supply to wealthy nations.

Global Justice Now campaigner Joe Karp-Sawey dubbed the UK ‘one of the key drivers of vaccine inequality’ for ‘hoarding as many vaccines as possible and undercutting Covax’.

In total, the UK Government has secured 407,539,370 coronavirus doses, of which it has already received 109,539,370, according to figures recorded by data company Airfinitys.

Out of the almost five million jabs the UK has access to 24.54% (100 million) are Oxford/AstraZeneca doses. This means up to 75.46% of the country’s vaccines were bought through bilateral deals with pharmaceutical companies.

The booster programme alone has apparently cost the Government around £1 billion, The Times reported last month.

Prior to this, the European Union (EU) secured 900 million Pfizer jabs with the option to buy the same amount again.

Indeed global demand for the vaccine has increased so much, the jabs are reportedly now selling for £20 instead of their earlier price of £18.

In an effort to get around the lack of access to existing vaccine supplies, South Africa and India proposed a temporary waiver on intellectual property rights last October.

The idea is to allow lower-to-middle-income countries to produce their own versions of the vaccines through manufacturers vetted by the WHO in the Agreement on Trade-Related Aspects of Intellectual Property Rights (TRIPS).

But many governments along with pharmaceutical companies argue that different regulations and medical practices in the various countries could put vaccines in danger of not being made properly.

In a historic U-turn, Joe Biden’s administration backed TRIPS in May. But the UK, along with several other superpowers, is still blocking it from going through.

In a statement, the Government said it preferred to protect intellectual property while also forming partnerships with ‘eligible’ members – so pharmaceutical companies could ensure the jabs are made safely.

The Foreign, Commonwealth and Development Office (FCDO) said: ‘The UK is leading the way to support a global recovery to the COVID-19 pandemic and improving access to vaccines.

‘We have committed to donate 100 million doses to other countries by June 2022, and as part of this pledge have already delivered over 9 million doses to developing nations across Africa and Asia.

‘On top of this, UK funding is helping to provide around 1.8 billion vaccines to low- and middle-income countries through COVAX by early 2022.’

Get in touch with our news team by emailing us at webnews@metro.co.uk.

For more stories like this, check our news page.