KATIE Price has begged Boris Johnson for new laws to crack down on "faceless keyboard warriors" after her son Harvey was trolled in a vile video.

She blasted "unacceptable online abuse" after a man who shared a video mocking 18-year-old Harvey was cleared by a judge as it was a "joke". 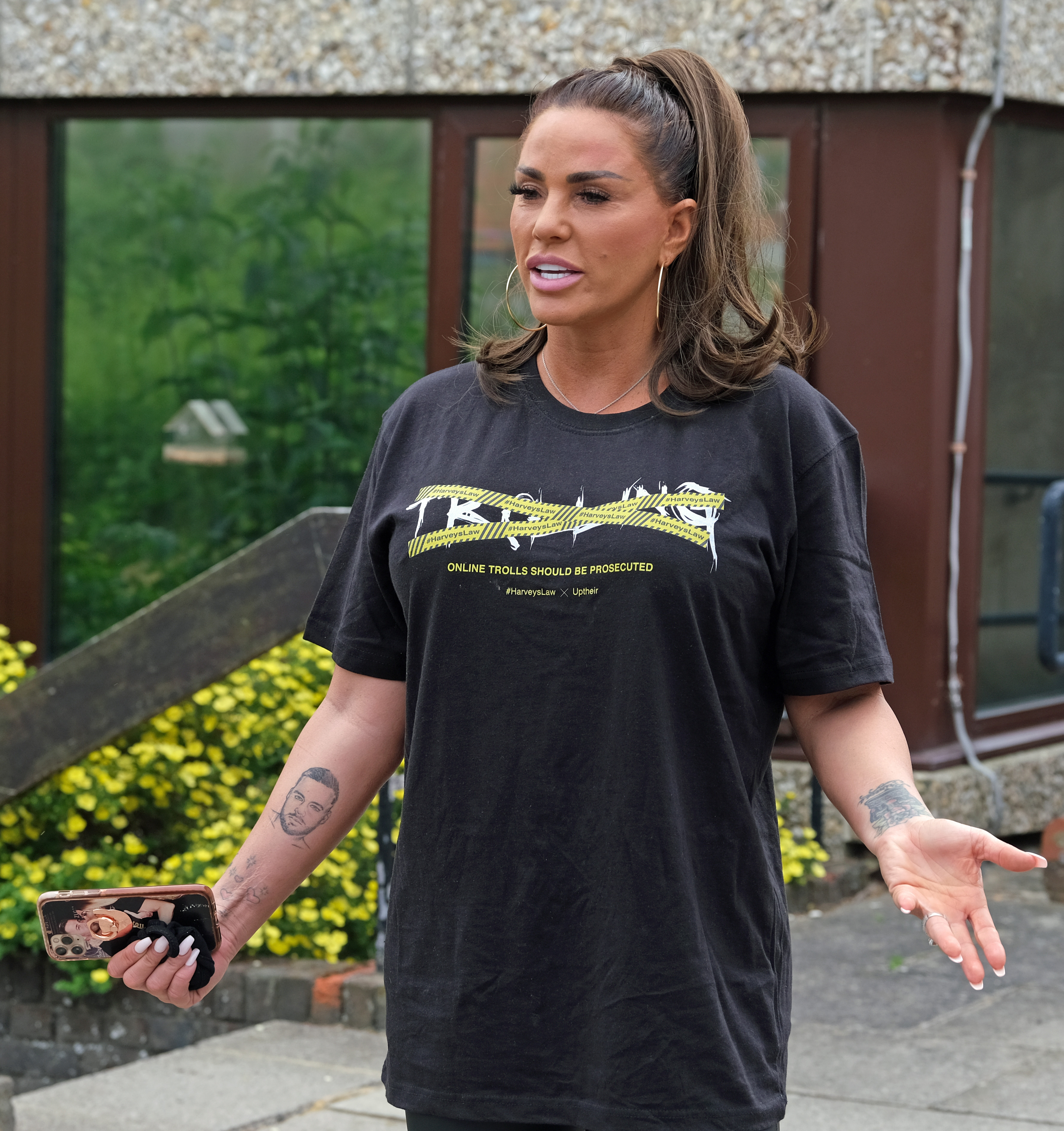 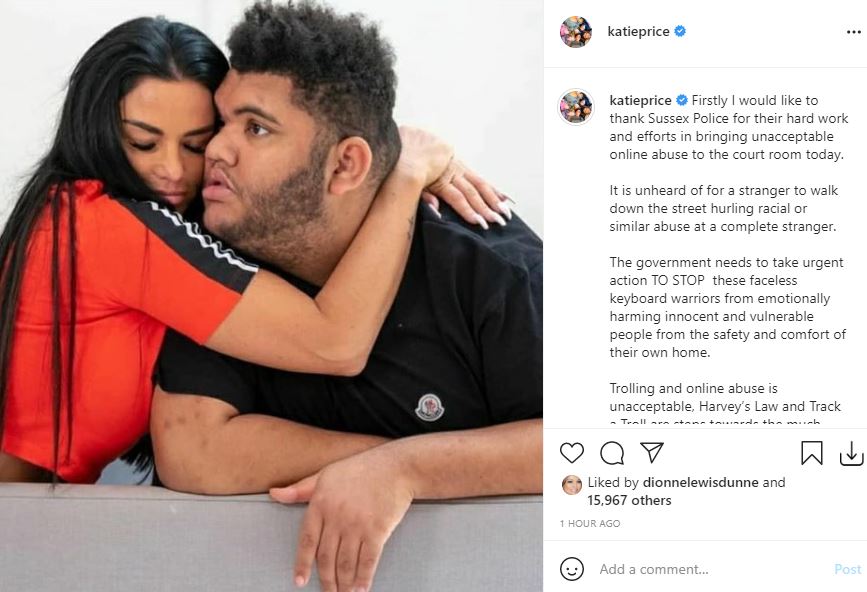 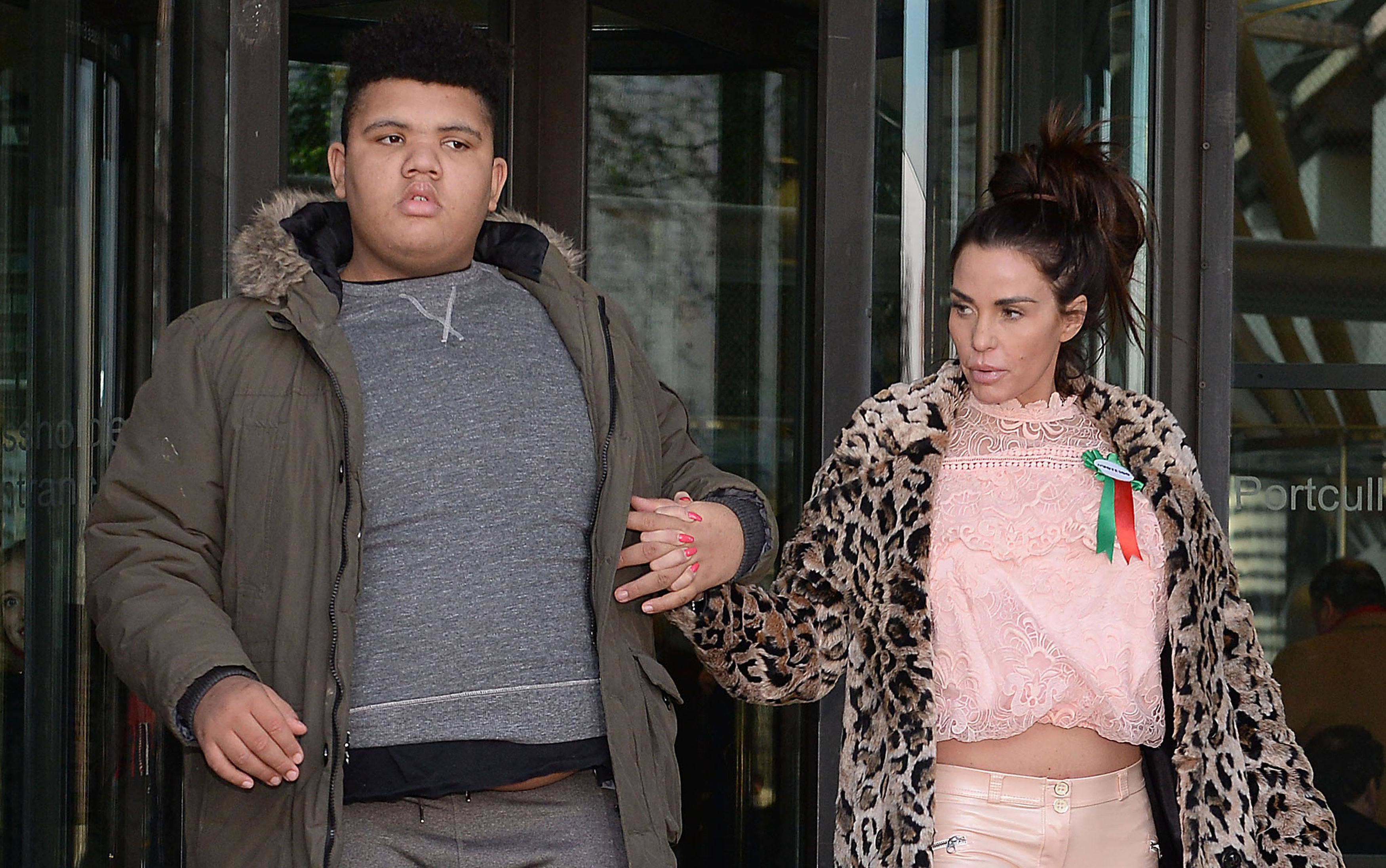 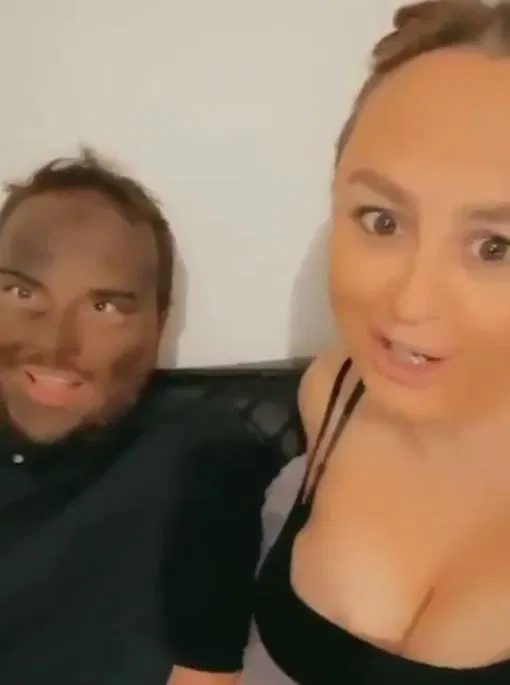 Philip Lewer, 52, posted the video on Twitter after it appeared on his WhatsApp in November last year as he found it “mildly amusing”.

It showed a woman playing Katie asking: "If someone says something horrible to Harvey, what do we say?"

Her partner, who is wearing blackface and is not the defendant, responds: "Hello you c***s."

Lewer was today cleared of sending by public communication network an offensive message after JPs found he shared the clip as a "joke" and didn't intend to cause offence.

In an Instagram post, Katie, who has been campaigning for "Harvey's Law" to make online abuse a specific offence, urged the government to take "urgent action" against social media trolls.

She wrote: "Firstly I would like to thank Sussex Police for their hard work and efforts in bringing unacceptable online abuse to the court room today.

"It is unheard of for a stranger to walk down the street hurling racial or similar abuse at a complete stranger.

"The government needs to take urgent action TO STOP  these faceless keyboard warriors from emotionally harming innocent and vulnerable people from the safety and comfort of their own home.

"Trolling and online abuse is unacceptable, Harvey’s Law and Track a Troll are steps towards the much needed regulation of online behaviour." 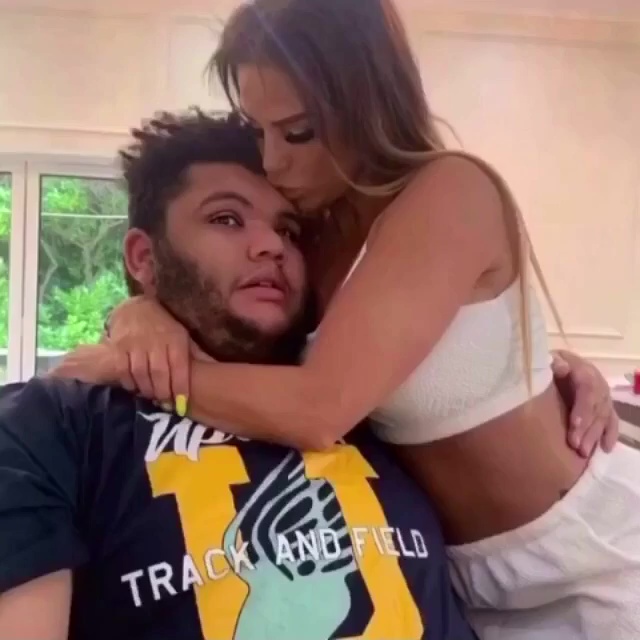 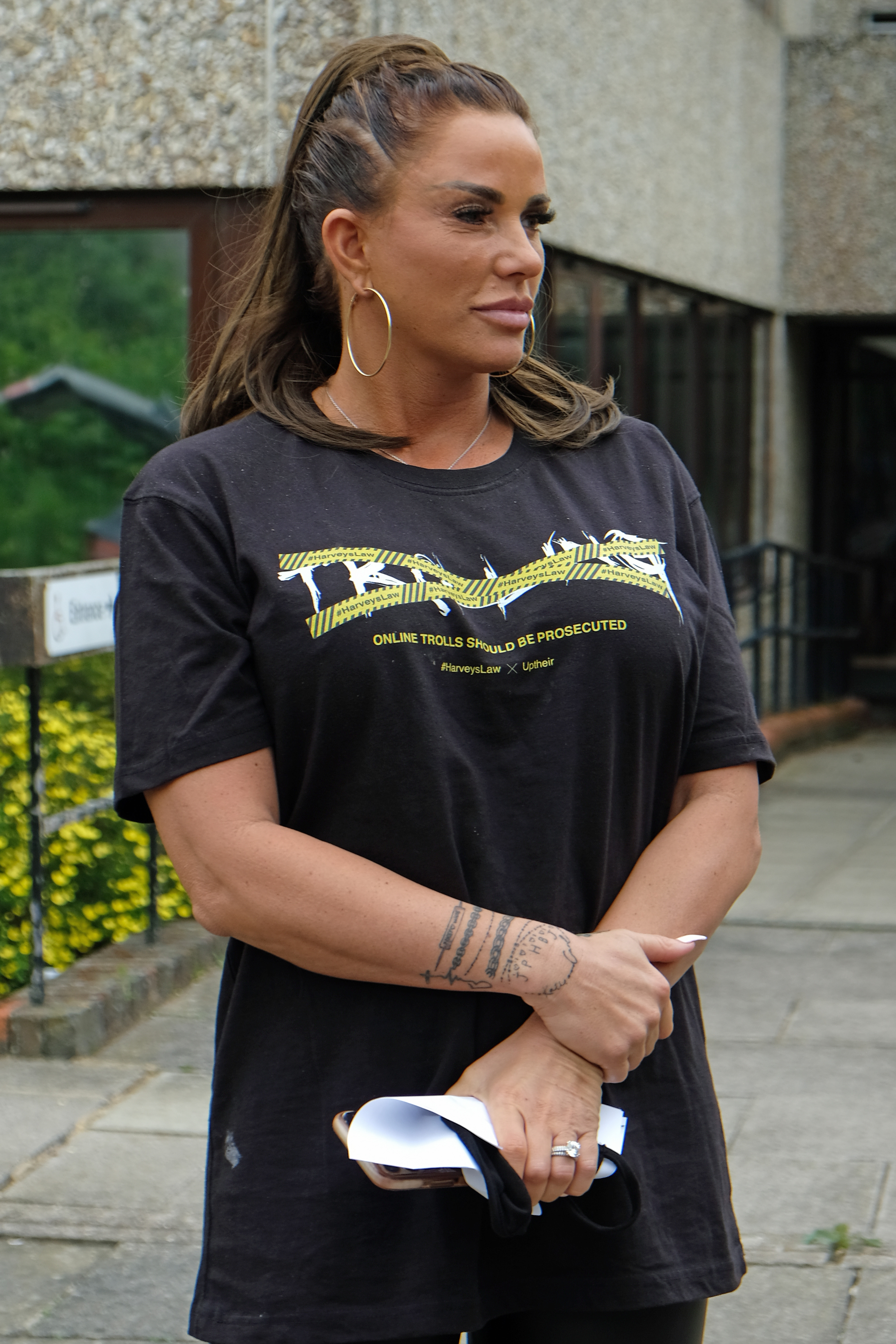 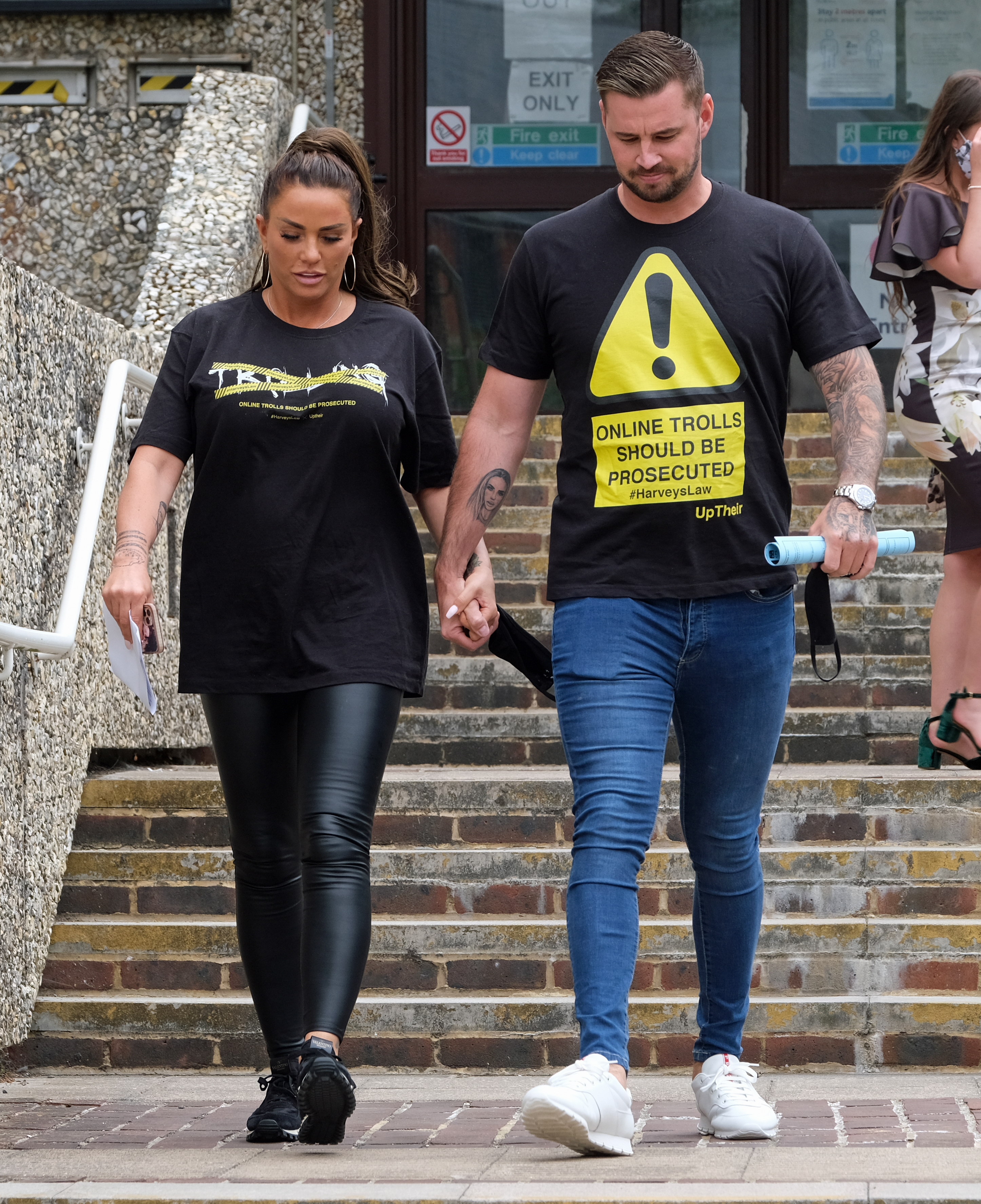 Katie, 43, branded him a "coward" as she left Hasting Magistrates' Court and vowed to continue "fighting for justice" for Harvey.

The former model added: "This is why I’m doing Harvey’s Law – he’s got away with it and he’s probably going to go back and laugh.

“He’s a coward. We can all have freedom of speech, but you know when something’s wrong and he knew that video was wrong."

Katie said the verdict might "encourage other people" and said she felt "disappointed".

She also claimed she was told there "wasn't enough evidence" to prosecute others involved.

The mum-of-five added: "They should’ve followed it through to put an example out there that you will be prosecuted, there is a consequence – when really, it’s just proved you can mock a disabled child online and get away with it.

"It sickens me to know that they’re probably laughing at us saying ‘ha-ha, he’s got off it, we’ve got off it’.”

"I will still fight for justice for Harvey and I’m still going to try and protect everyone I can with the racism, mocking disability, because it’s clearly mocking him.

“This is why I’m doing Harvey’s Law – he’s got away with it and he’s probably going to go back and laugh.

“He was laughing on the way out, he was grinning while he was giving evidence – but I kept my dignity and didn’t say anything because I know, behind the scenes, I’m doing the best I can to stop this.

“He’s a coward. We can all have freedom of speech, but you know when something’s wrong and he knew that video was wrong.

“He should be named and shamed. But it’s now going to encourage other people. He’s got away with it.

“I feel disappointed in the court.

“They should’ve followed it through to put an example out there that you will be prosecuted, there is a consequence – when really, it’s just proved you can mock a disabled child online and get away with it."

Katie said that the people in the video had been arrested but that their cases had been dropped because there is “not enough evidence”.

She added: “It sickens me to know that they’re probably laughing at us saying ‘ha-ha, he’s got off it, we’ve got off it’.”

Katie earlier faced Lewer as she gave heartbreaking evidence – branding the video the "most vile clip" she has ever seen.

Speaking from the witness box, Katie – supported by fiance Carl Woods – said she was determined to "do something about it" when she saw it.

The reality star added: “This one I found absolutely disgusting, because they managed to paint the colour of their skin, clearly being racist.

“They mimicked how he speaks and they are doing the eye movement.

“They are mocking me and him together. He can’t defend himself.”

Katie had previously shared a video on her Instagram as she made her way to court this morning.

She was later pictured arriving with fiance Carl, 32, wearing a t-shirt with her Harvey's Law slogan on it.

The court was told Lewer shared the clip on Twitter after it was made by someone else. 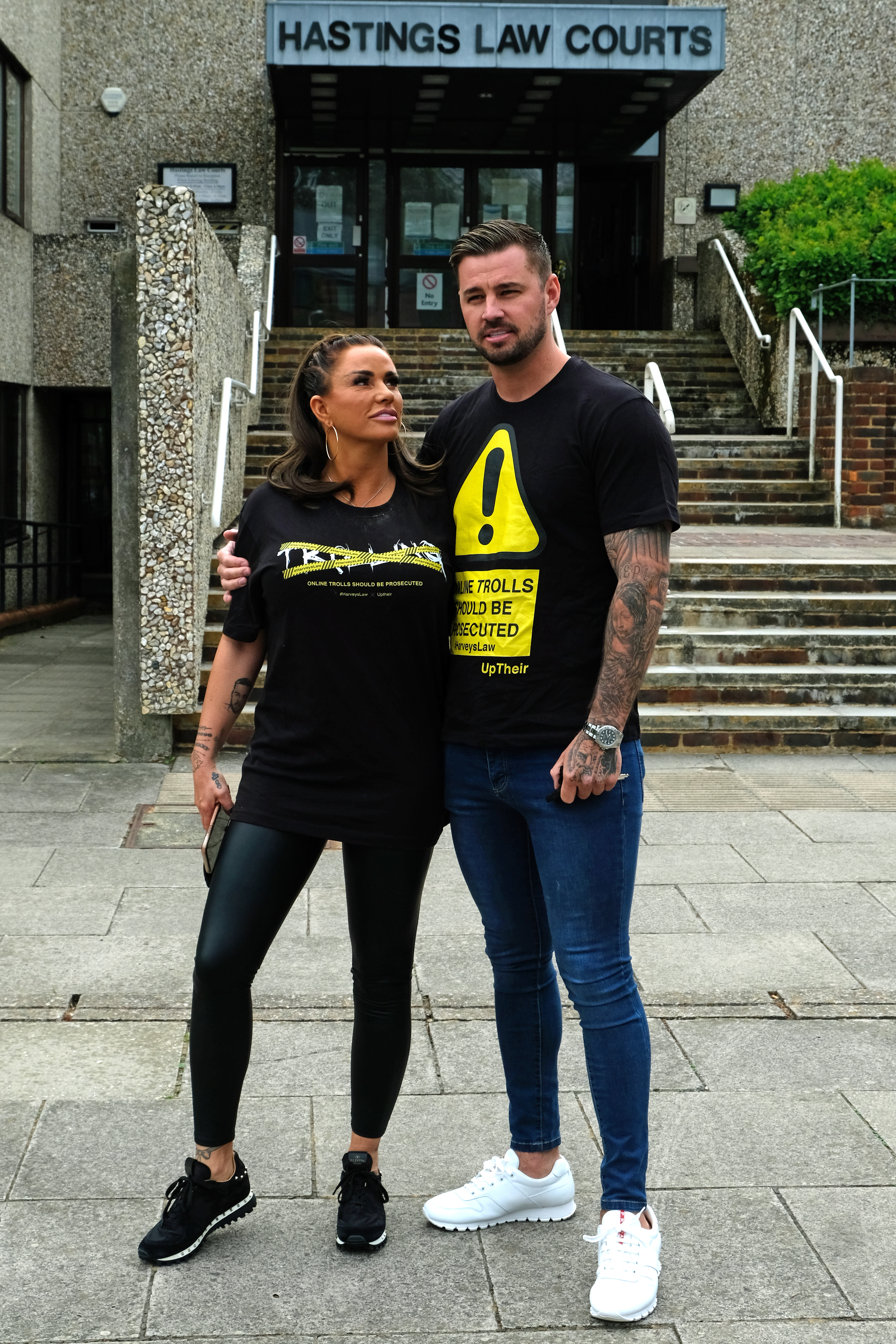 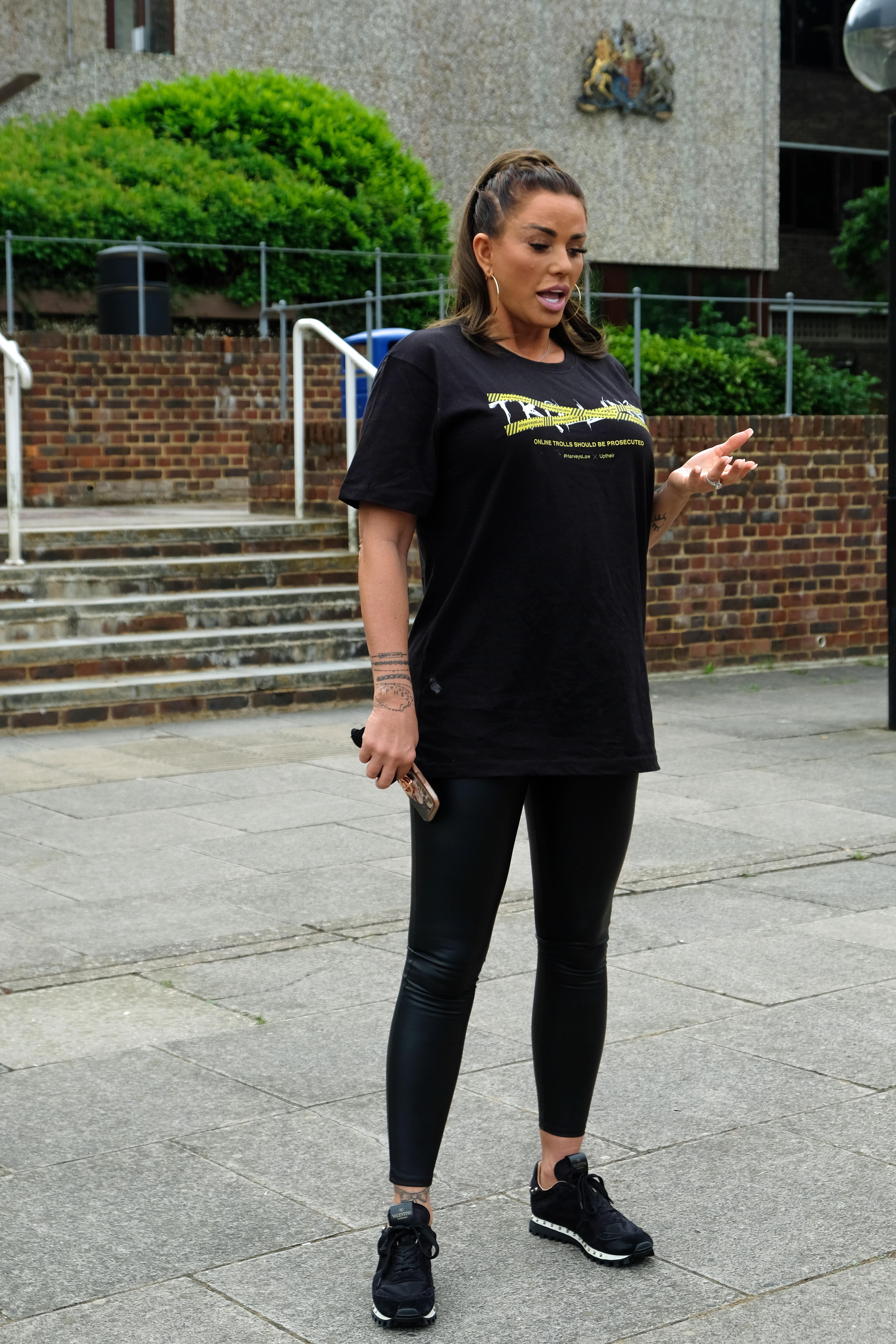 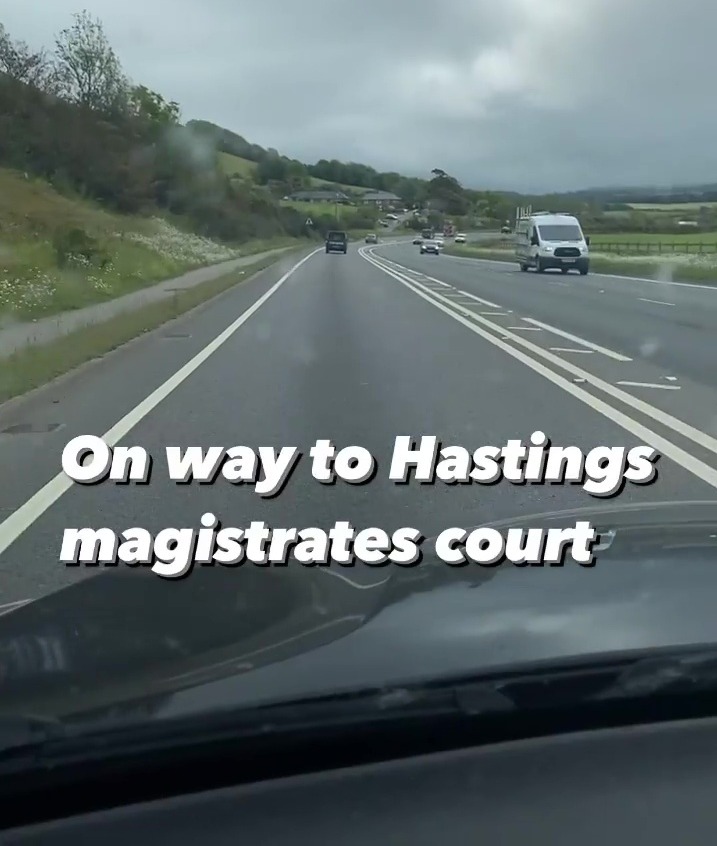 Asked by Prosecutor Elizabeth Green about why he posted the clip, Lewer said today: “It was the half-a***d way they went about it – she has a push-up bra and is caked in fake tan and he is blacked-up.”

Lewer said the man in the video was “playing a character badly” and said the Loose Women clip it was based on would “go down in history”.

He said people have blacked-up “right through to Little Britain” but said the case has “been a very chastening experience”.

Lewer told the court he wanted to apologise but added: “I didn’t find it offensive. I didn’t think people would be offended.”

He had changed his name “so people could not find him” when he posted the video after he received messages telling him it was “vile”, it was said.

Cops arrested him the following morning and he told them: “It’s just a tweet, a tweet. I can just delete the tweet. I was sent the link on WhatsApp.”

Katie had appealed on social media, who is spearheading the Track A Troll campaign to remove anonymity online, to track down those responsible.

In a previous post on the social media site, she wrote: "I've been sent this disgusting, racist mockery-taking video about me and Harvey mocking his disabilities, clearly planned hence the face-painting (sic).

"Does anybody know these disgusting humans as I will be reporting to the police #Harvey'sLaw.

"Words cannot describe how upset I am, this is so cruel. These people need reporting."

She is campaigning for a new law, which she has dubbed “Harvey’s Law”, to make online abuse a specific offence and to create a register of offenders. 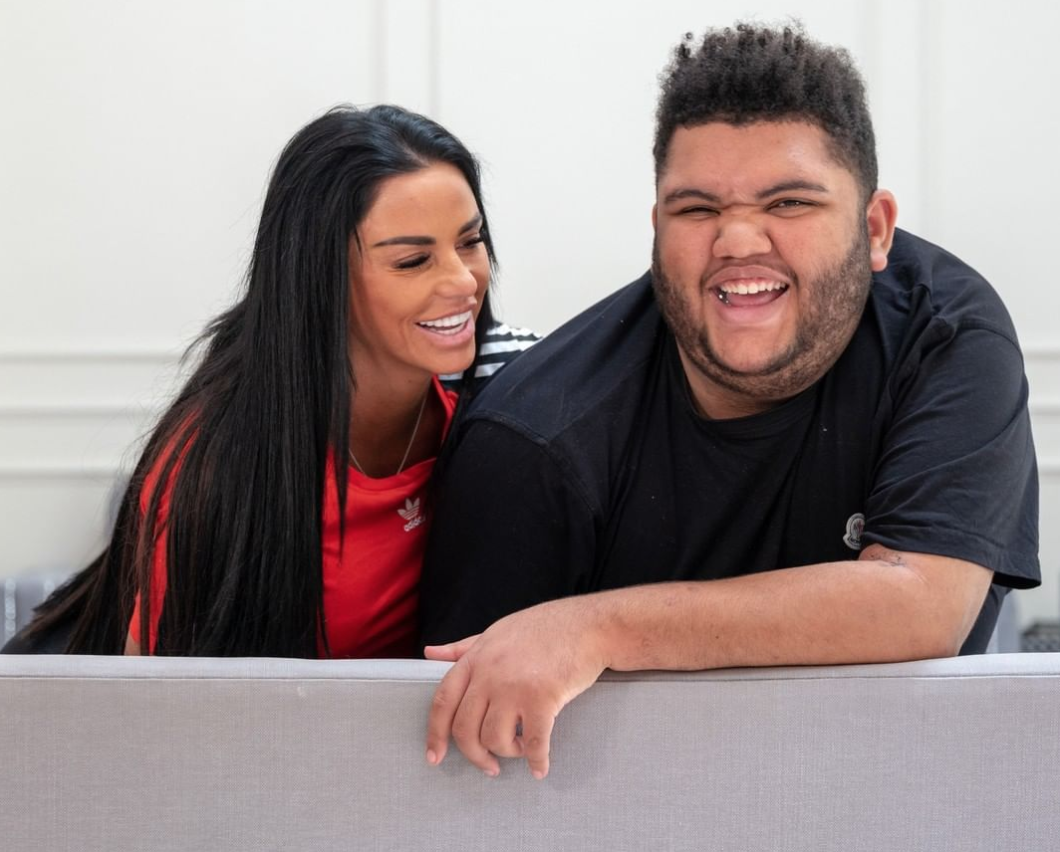 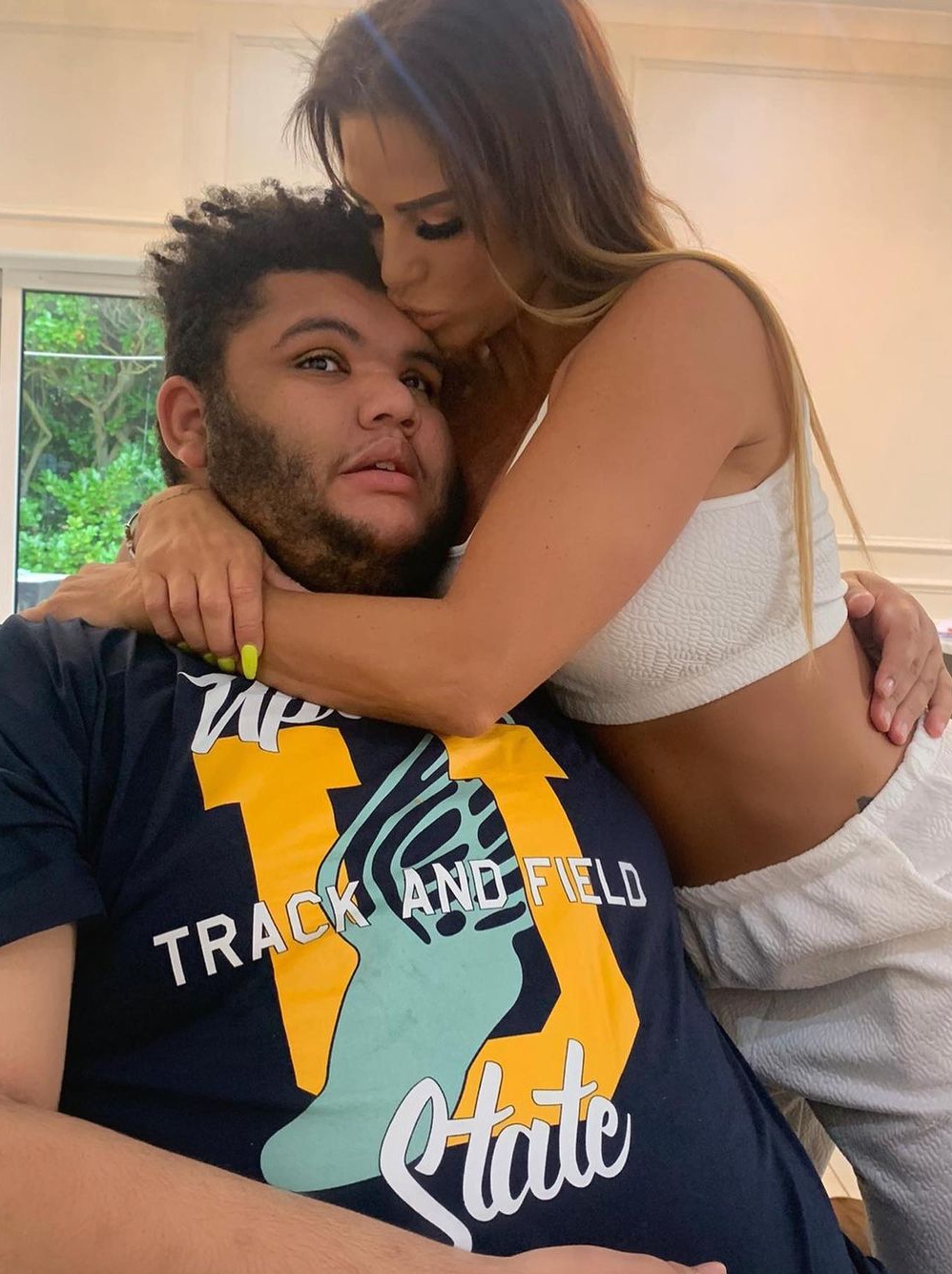