Girls and boys who reported being sexually abused by the late Labour grandee Lord Janner were ‘let down by institutional failings’ and were disbelieved, branded ‘brats’  and dismissed because they were in care, a damning inquiry into police, prosecution and social services responses to their allegations concluded today.

Leicestershire Police officers investigating decades of abuse claims against Lord Janner regularly ‘did not look beyond the often troubled backgrounds’ of the alleged victims, who said they were abused in children’s homes in the county between the early 1960s and the late 1980s.

The Independent Inquiry into Child Sexual Abuse (IICSA) accused Detective Superintendent Christopher Thomas, who led Operation Dauntless, the third police investigation into Lord Janner, of being ‘uninterested’ in the allegations, while colleagues were ‘quick to dismiss’ some testimonies.

Witness statements were not passed on to the Crown Prosecution Service and were later found in a locked drawer. When when child accused Janner of sexual abuse, a member of staff at a Leicestershire children’s home allegedly replied that ‘nobody would believe him because he was just a brat in care’.

In one case, an alleged victim said she was raped by Lord Janner, who then told her he could ensure she became the next prime minister’s wife. Another 13-year-old allegedly abused in the 1980s said he was forced to perform a sex act on Lord Janner, after which he was given two 50p pieces.

They alleged being seriously sexually abused in a range of locations, including schools, a flat in London, a hotel, Lord Janner’s car and the Houses of Parliament.

Lord Janner, a Labour MP from 1970 until 1997 when he was made a peer in the House of Lords, was charged with 22 counts of child sexual abuse offences, relating to nine different boys, in 2015. He died with dementia later that year while awaiting trial, and always denied the allegations. His family claim he is the victim of a witchhunt. 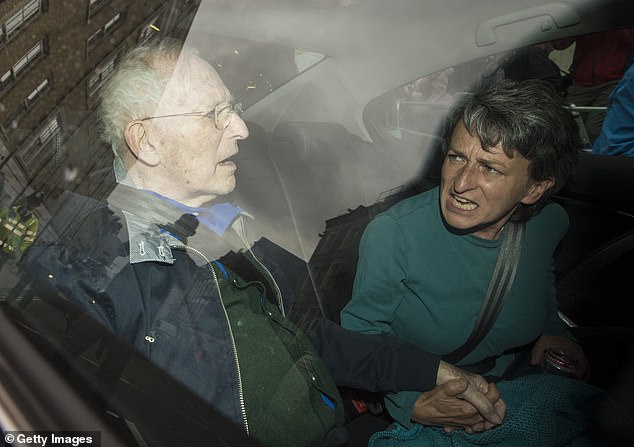 Lord Greville Janner leaves at Westminster Magistrates’ Court with his daughter on August 14, 2015 in London. He was accused of committing acts of abuse in children’s homes, schools, a flat in London and in Parliament over the course of three decades. He died before facing trial

Professor Alexis Jay, who is chairing the wide-ranging abuse inquiry, said: ‘Despite numerous serious allegations against the late Lord Janner, police and prosecutors appeared reluctant to fully investigate the claims against him. 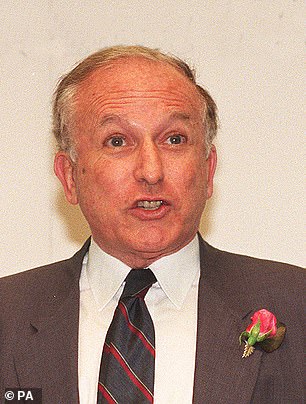 Lord Greville Janner was nominated for a peerage by then-prime minister Tony Blair weeks after sweeping to power in 1997.

‘On multiple occasions police put too little emphasis on looking for supporting evidence and shut down investigations without pursuing all outstanding inquiries.’

She also said Leicestershire County Council had a ‘sorry record of failures’ relating to abuse at children’s homes dating back to the 1960s.

The report described the decision-making of both Mr Thomas and Roger Rock, reviewing lawyer for the Crown Prosecution Service, as ‘unsound and strategically flawed’.

Prof Jay added: ‘This investigation has brought up themes we are now extremely familiar with (across the whole inquiry), such as deference to powerful individuals, the barriers to reporting faced by children and the need for institutions to have clear policies and procedures setting out how to respond to allegations of child sexual abuse, regardless of the prominence of the alleged abuser.’

More than 30 complainants were involved in the inquiry, with their lawyers describing how poor children in care were on a ‘conveyor belt to abuse’. 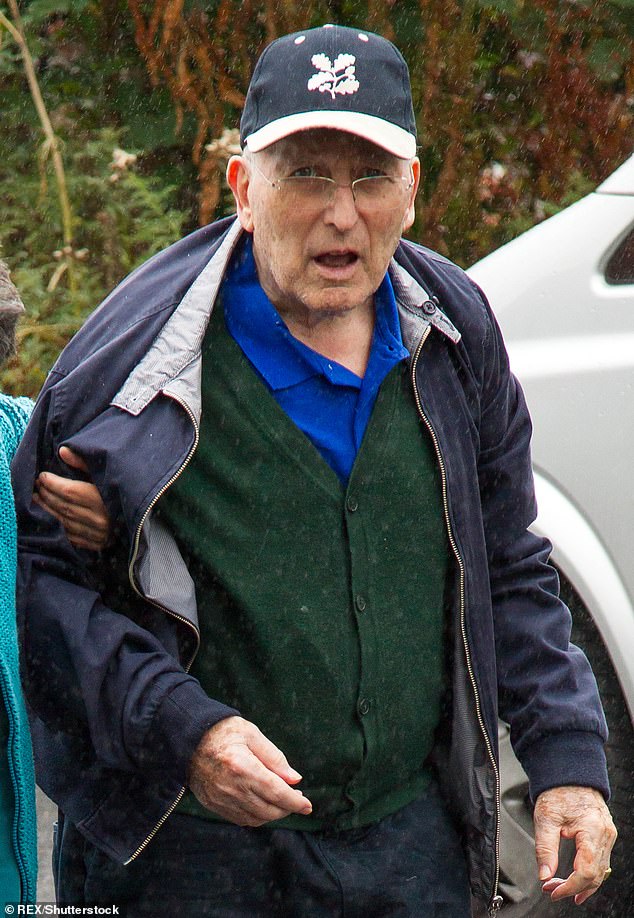 Lord Janner (pictured in August 2015), who had Alzheimer’s, died in 2015 while awaiting trial for 22 counts of child sexual abuse offences, relating to nine different boys, dating back half a century

Shocking claims from ‘abused’ children that were ‘brushed under the carpet’

The alleged abuse was largely meted out in children’s homes in the Leicestershire area between the early 1960s and the late 1980s, but some said they were also assaulted in private residences, a hotel, Lord Janner’s car, and in the Palace of Westminster.

None of the complainants were called to give live evidence during the inquiry, due to it focusing solely on the state responses to their allegations against Lord Janner, rather than the authenticity of the claims themselves.

Instead, the inquiry heard brief evidence from several children through their lawyers.

Lord Janner died in 2015, awaiting trial for a string of child abuse offences.

He always denied any involvement.

Christopher Jacobs, representing some of the complainants, told the inquiry that his clients were abused in care in Leicestershire decades ago, and that Lord Janner ‘was able to act with impunity’.

Mr Jacobs described the ordeal suffered by Tracey Taylor, a complainant who has waived her right to anonymity, who was sent to care home as a 14-year-old in the 1970s.

He told the inquiry: ‘She said she was raped by a man who said his name was Greville Janner, he said he was an MP and that he could make her the next prime minister’s wife.

‘She has told the police about the abuse, but she has never been believed due to her mental health problems.

‘On some occasions, police mocked her statements, calling her Crazy Tracey.’

Tim Betteridge, another complainant to waive his anonymity, said he was sexually abused by Lord Janner on two occasions, including once in an allotment and once in a mobile unit.

The inquiry heard Mr Betteridge raised the alarm but was told by staff at the care home that ‘nobody would believe him because he was just a brat in care’.

Another 13-year-old allegedly abused in the 1980s said he was forced to perform a sex act on Lord Janner, after which he was given two 50p pieces.

He confided in staff but no action was taken, Mr Jacobs said.

And in another case, a 15-year-old boy described how he felt angry that his complaints were dismissed out of hand, and that staff, police and social workers ‘turned their heads away from the predators who tormented him as a child’.

Mr Jacobs said: ‘Their abusers told them they would not be believed … and on the occasions when the children were brave enough to disclose, the advice of their abusers has been borne out, that they would be comprehensively disbelieved.’

Lawyer David Enright said one complainant described how ‘it is like poor children are on a conveyor belt to abuse, and that nobody seems to believe them’.

Another victim added: ‘Hurdles were erected that no horse could jump.’

Mr Enright said his clients urged the investigation to end the practice of poor charging decisions in cases where ‘the complainant is often a poor and disadvantaged child, and when the alleged perpetrator is often a person of interest … such as a lord’.

The report was particularly critical of Mr Thomas, the senior investigation officer in 2006.

It said: ‘Our overriding sense is that Det Supt Christopher Thomas was uninterested in this investigation, and his decisions to limit the inquiries undertaken appeared to be reflective of a wider failure to pursue the investigation with the rigour it deserved, rather than being motivated by a wish to protect Lord Janner or show him undue deference.’

The inquiry did not examine whether or not the allegations against Lord Janner were true.

But it found ‘crucial statements’ in 2000’s Operation Magnolia police investigation were ‘brushed under the carpet’.

And it claimed police and prosecutors ‘appeared reluctant to progress’ the subsequent Dauntless investigation.

Allegations against the former Leicestershire MP first emerged in the 1990s, although the Sir Richard Henriques report in 2016 found that failures by police and prosecutors meant three chances were missed to charge Lord Janner, in the 1990s and in operations Magnolia and Dauntless.

The inquiry also said Lord Janner should have been subject to scrutiny when he was nominated for a peerage by then-prime minister Tony Blair weeks after sweeping to power in 1997.

Previously, the investigation into MPs, peers and civil servants working at Westminster found political institutions ‘significantly failed in their responses to allegations of child sexual abuse’.

But it said there was no evidence of a ‘Westminster paedophile ring’, following allegations which kickstarted the multimillion-pound inquiry and later resulted in the prosecution of fantasist Carl Beech.

The final IICSA report, taking in all 19 strands of the inquiry, is expected to be laid before Parliament next year.

Professor Alexis Jay, who chaired the inquiry, said on Tuesday: ‘Despite numerous serious allegations against the late Lord Janner, police and prosecutors appeared reluctant to fully investigate the claims against him.

‘On multiple occasions police put too little emphasis on looking for supporting evidence and shut down investigations without pursuing all outstanding inquiries.’

A CPS spokesman said: ‘The CPS has acknowledged past failings in the way allegations made against Lord Janner were handled.

‘It is remains a matter of sincere regret that opportunities were missed to put these allegations before a jury.

‘We have co-operated fully with the inquiry and will carefully consider its conclusions.’

He said Operation Enamel, which eventually resulted in Lord Janner being charged, ‘demonstrated then, more than six years ago, a clear commitment and determination to pursue allegations of current or historic abuse against children’.

‘I would like to acknowledge again the bravery and candour of the complainants who have contributed to this long and challenging inquiry which must have caused significant anxiety and suffering.

‘With them in mind, Leicestershire Police will study the report scrupulously and examine it for any actions or improvements.’