Italy has seized £118 million worth of luxury yachts and villas from Russian oligarchs to add to the growing pressure on Russian President Vladimir Putin to cease his brutal invasion of Ukraine.

Several European governments are moving against Russian oligarchs, seizing superyachts and other properties from billionaires on sanctions lists.

Since Friday, Italian authorities have seized 143 million euros (£118 million) in luxury yachts and villas in some of its most picturesque destinations, including Sardinia, the Ligurian coast and Lake Como.

‘We must be able to stop Putin’s attack, bringing him to the table, and he won’t go with niceties,’ Italian foreign minister Luigi Di Maio told Italian state TV on Friday, announcing Italy’s plans to begin the seizures of property belonging to oligarchs close to Putin. 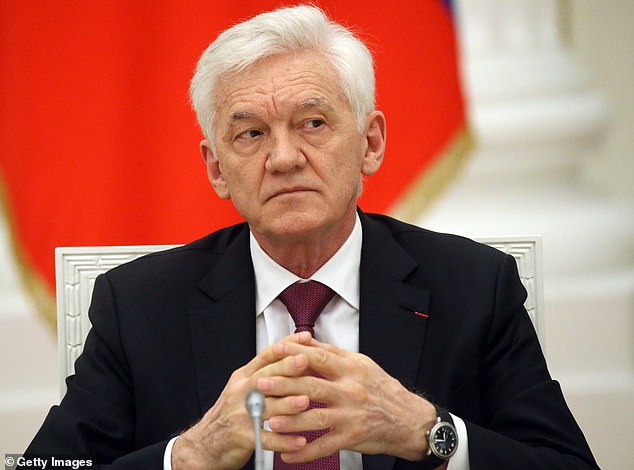 Since Friday, Italian authorities have seized 143 million euros (£118 million) in luxury yachts and villas in some of its most picturesque destinations. A superyacht belonging to oligarch Gennady Timchenko (pictured) was one of the assets seized 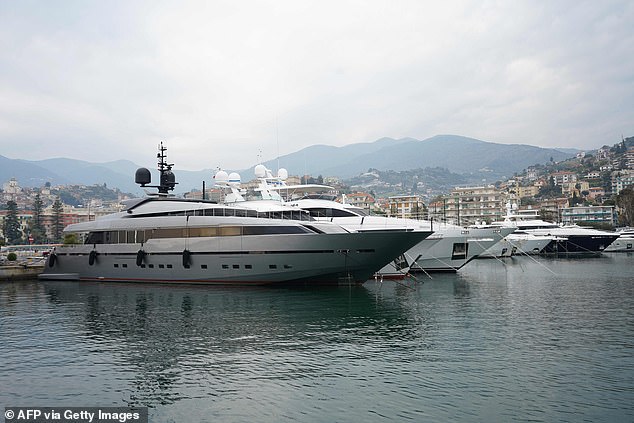 A picture taken on March 5, 2022 shows a view of the yacht ‘Lena’, belonging to Gennady Timchenko, an oligarch close to Russian President, in the port of San Remo

The 215ft Lady M, owned by Alexei Mordashov in nearby Imperia – featuring six suites and estimated to be worth 65 million euros (£53 million) – was also seized, as well as villas in Tuscany and Como, according to government officials.

The villa of Russian-Uzbek business magnate Alisher Usmanov was seized along the Emerald Coast in northern Sardinia, long the playground of the world’s wealthiest.

This came after German officials this week denied reports that they had seized Usmanov’s yacht in the port of Hamburg.

According to the UK Government, he also owns Beechwood House in Highgate, worth an estimated £48 million, and the 16th-century Sutton Place estate in Surrey.

Furthermore, a villa on Lake Como owned by Vladimir Soloviev – a Russian state TV host – was also taken by Italian authorities, according to The Guardian, 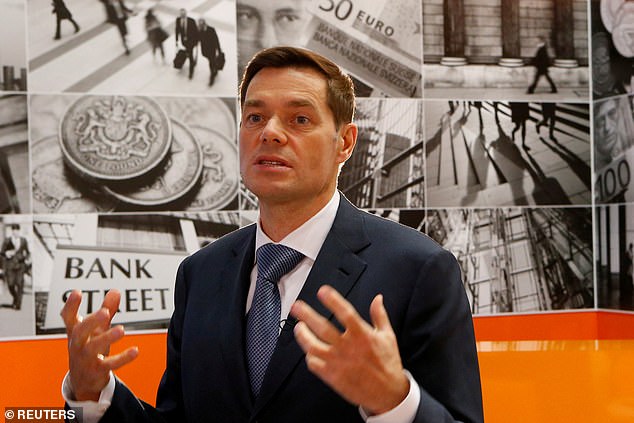 The 215ft Lady M, owned by Alexei Mordashov in nearby Imperia – featuring six suites and estimated to be worth 65 million euros (£53 million) – was also seized, as well as villas in Tuscany and Como, according to government officials 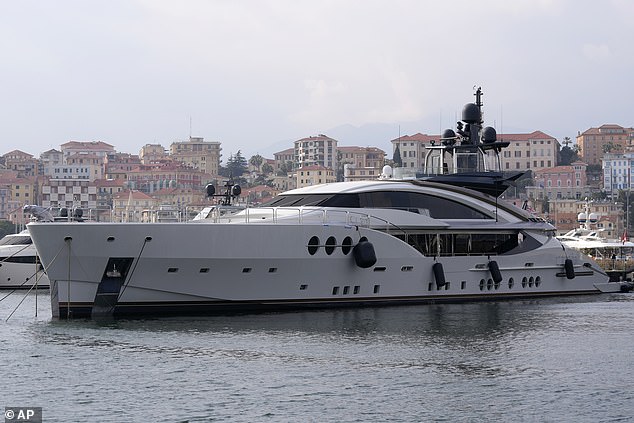 A view of the yacht ‘Lady M’, owned by Russian oligarch Alexei Mordashov, at it is docked at Imperia’s harbor, Italy, Saturday, March 5, 2022

‘Vladimir Putin keeps all his money with the oligarchs,’ said William Browder, a US-born and London-based financier and human rights activist who was once a major investor in Russia but ran afoul of the government in the late 2000s.

‘And this is a very effective psychological warfare, to start seizing yachts.

‘And he’s a guy who … rules by image, you know, is the person who has pictures of himself with the shirt off on a horse.

‘And so it’s a bad image to have one of his best friends’ yacht seized in the south of France,’ Browder said.

The Daily Beast reported that Vladimir Soloviev bemoaned the fact that he might lose his Italian assets while speaking on live TV.

‘Suddenly someone makes a decision that this journalist is now on the list of sanctions. And right away it affects your real estate. Wait a minute. But you told us that Europe has sacred property rights,’ he said, the news outlet reported. 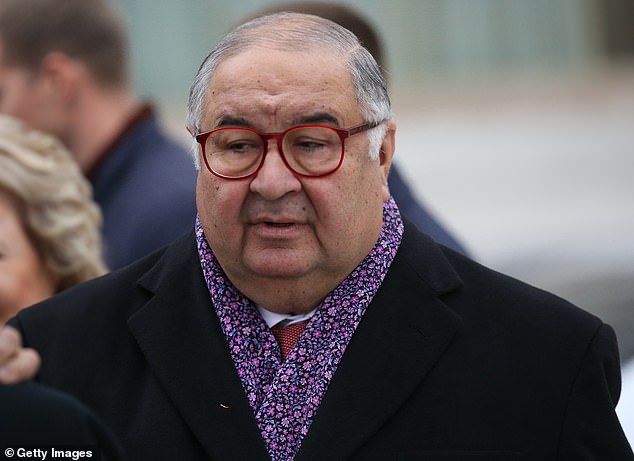 The villa of Russian-Uzbek business magnate Alisher Usmanov was seized along the Emerald Coast in northern Sardinia, long the playground of the world’s wealthiest 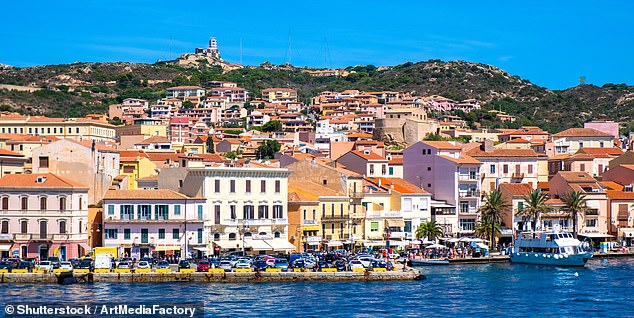 Pictured: Sardinia, Italy – which has for a long time been a destination for Europe’s billionaires 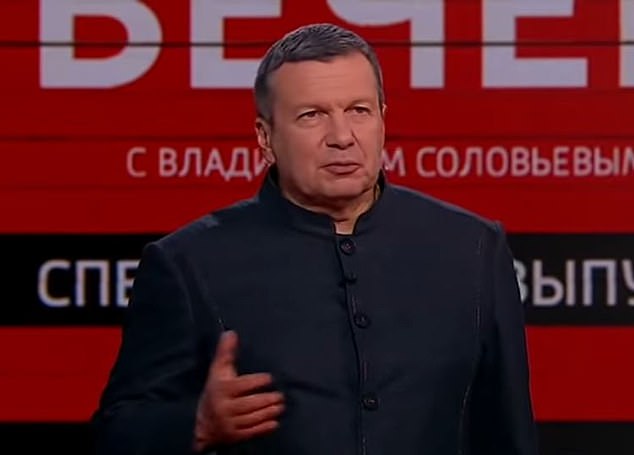 A villa on Lake Como owned by Vladimir Soloviev – a Russian state TV host (pictured) – was also taken by Italian authorities, according to The Guardian , 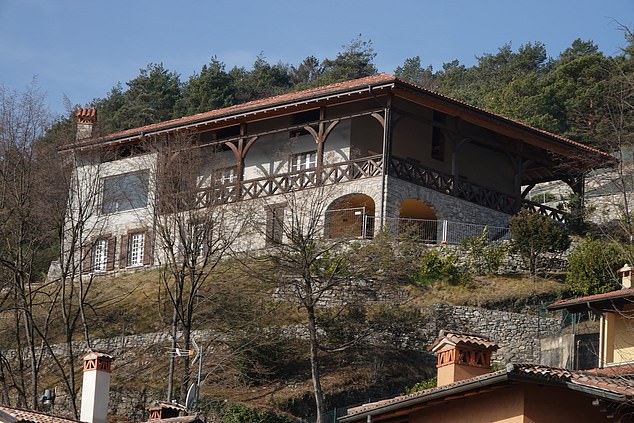 Germany’s economy ministry said it was in the process of ‘swiftly and effectively implementing the Russia sanctions’ but declined to say publicly which assets had been seized, if any.

So far, French authorities have seized a yacht linked to Igor Sechin, a Putin ally who runs the Russian oil giant Rosneft, in the Mediterranean resort of La Ciotat where it arrived in January for repairs.

French officials said Thursday that the crew was preparing for urgent departure when they arrived, even though the repairs were still under way.

Britain meanwhile is set to make it easier to penalise Russian oligarchs and align those sanctions with the European Union and the US over the invasion of Ukraine, the government said on Saturday.

The UK has been criticised for not doing enough to clamp down on oligarchs’ ill-gotten gains which are frequently invested in luxury real estate in London, a popular destination. 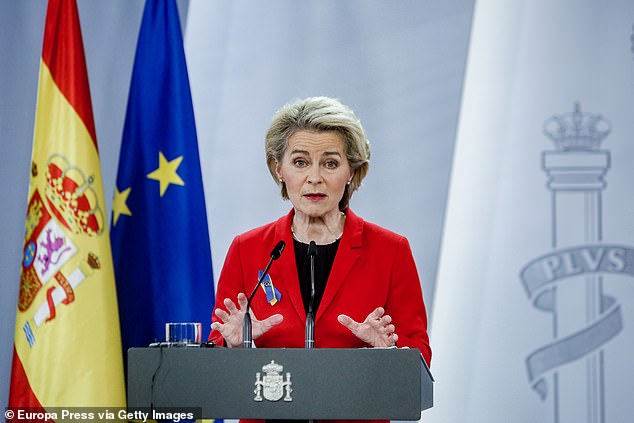 Several European governments are moving against Russian oligarchs, seizing superyachts and other properties from billionaires on sanctions lists. Pictured: The President of the European Commission, Ursula von der Leyen, speaks at the press conference after a meeting with the President of the Government, at La Moncloa, on March 5, 2022

Amendments will be introduced to the Economic Crimes bill, which the government now wants to be passed by the lower House of Commons on Monday

A statement said the bill will ‘crack down on corrupt elites and ramp up pressure on (President Vladimir) Putin’s regime.’

Moscow in turn vowed retaliatory measures against ‘the sanctions hysteria in which London has played one of the leading roles, if not the main one’.

British Economic Secretary to the Treasury John Glen said Saturday that the UK amendments will ‘allow us to move harder and faster’ with sanctions.

‘What we’re trying to do is make it more straightforward to get a legal basis to move on these individuals. We believe that these changes will make that difference,’ Glen told BBC radio.

‘We need to look at how we can expedite these decisions more swiftly.’

The amendments ‘will allow the UK to align more rapidly with the individual designations imposed by our allies such as the US, Canada and the EU via an urgent designation procedure,’ the government said after criticism that sanctions lists were not always aligned.

They will also reduce the deadline for foreign companies to register their beneficial owners from 18 months to six months, to ‘help crack down on money laundering through UK property’. 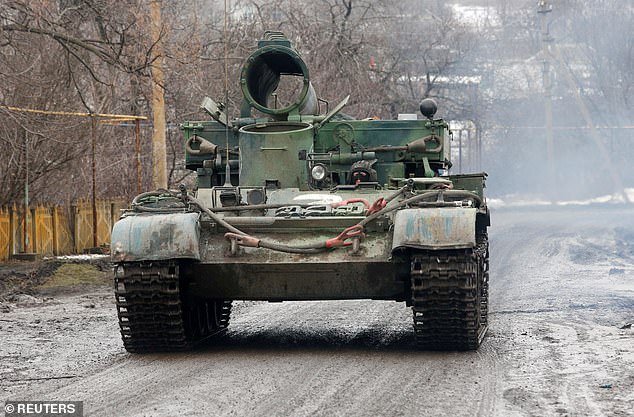 Pictured: A tank driven by pro-Russian forces is seen moving through the Donetsk region

The government said the bill would be ‘expedited’ through the Commons on Monday with a view to it becoming law ‘as soon as possible’.

The UK has already passed a swathe of sanctions against Russian oligarchs, banks and businesses, as well as banning Russian aircraft and vessels over Moscow’s invasion of Ukraine.

‘London has made a final choice of open confrontation with Russia. Such a development convinces us once more that Russophobia and the aim to undermine the Russian state are integral elements of Britain’s foreign policy.’

News of the Italian sanctions came after British dockers on Saturday refused to unload Russian oil from a tanker, calling for the government to close a ‘loophole’ in sanctions allowing foreign-flagged ships to deliver the fuel.

The Seacod is currently moored near the Stanlow refinery in northwest England, and unions say its cargo is not covered by a ban on Russian vessels because it is German flagged.

UK sanctions introduced over the invasion of Ukraine ban all ships that are Russian owned, operated, controlled, registered or flagged from entering British ports.

Unite union general secretary Sharon Graham said that ‘due to the ongoing conflict in Ukraine, Unite workers at the (Stanlow) facility will under no circumstances unload any Russian oil regardless of the nationality of the vessel.’

The refinery’s operator, India’s Essar, said it was ‘deeply concerned by the humanitarian crisis unfolding in Ukraine and is fully complying with the statutory framework implemented by the UK government with regard to Russia-related entities’.

The UK is less dependent on Russian energy than many other European nations.

The Unison union said two other Cyprus-flagged tankers carrying Russian gas, the Boris Vilkitsky and Fedor Litke, were turned away from the Isle of Grain in Kent, southeastern England, on Friday.

‘While it looks like our intervention has been successful in seeing these ships turned away, a more fundamental problem remains,’ Unison national officer for energy Matt Lay said in a statement.

‘The government must act immediately to close the loophole that does not cover the origin of vessels’ cargo and stop Russian goods continuing to arrive in the UK under the cover of another country.’

'Fit and healthy' wrestler, 19, dies from Covid just a day after telling mum he was 'fine'