Iran’s football team sung their country’s national anthem ahead of their World Cup clash against Wales in Qatar today, after refusing to do so in their first match.

Iran’s players appeared to back down from their protest following pressure from the Islamic regime.

Prior to their kick-off against England in their first group game on Monday, players remained silent as booing filled the ground.

Their previous refusal to sing was a show of solidarity with protesters in their home country, hundreds of whom have been killed in clashes with government security services over the death of Mahsa Amini – a woman who died in custody after being arrested by the Tehran’s morality police. 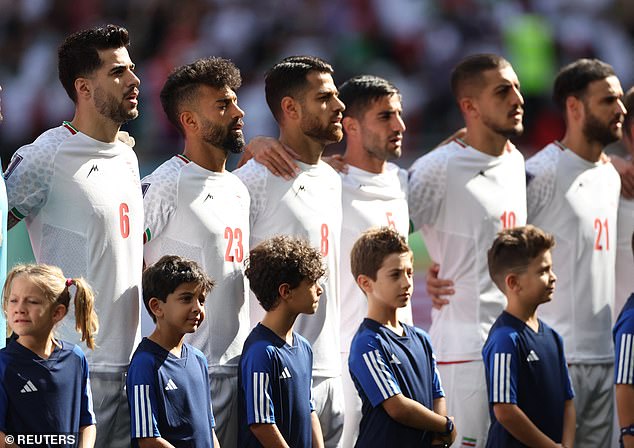 Iran ‘s football team sung their country’s national anthem ahead of their World Cup clash against Wales in Qatar today, after pressure from the Islamic republic to back down from their previous protests

But many Iranian fans in the stands still displayed slogans supporting the protests on Friday, drawing particular attention to human rights issues and the plight of women.

Qatari authorities took particular issue with one female fan, who had painted her face white – with bloody tears pouring out from her eyes. She held up an Iranian football shirt displaying the name of Mahsa Amini and the number 22 – her age when she died.

Outside the stadium, Iranian fans chanted: ‘Freedom for Iran, No to Islamic Republic’ – a direct rebuke of Iran’s theocratic government and society, where woman do not enjoy the same rights as their fellow male citizens. 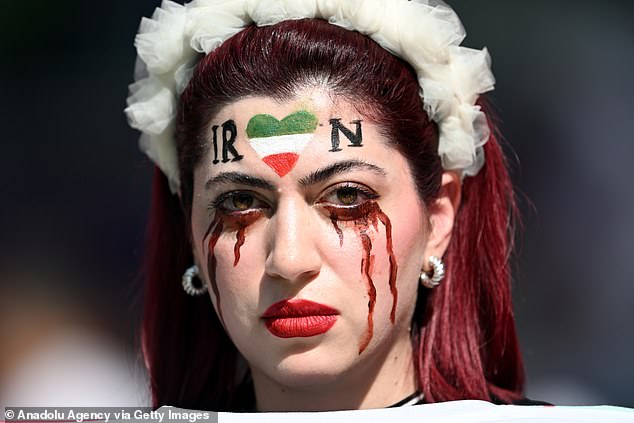 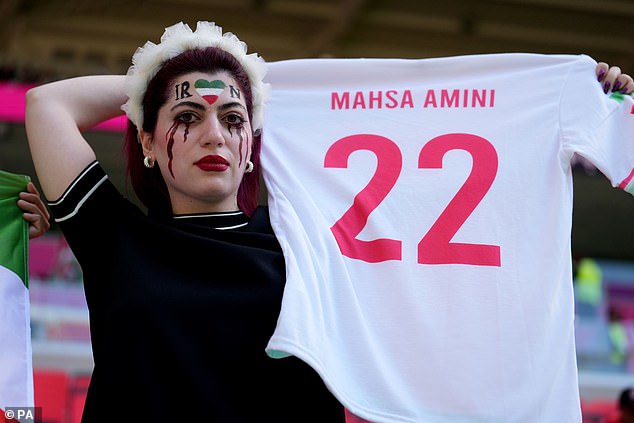 An Iran fan holding a shirt in memory of Mahsa Amini, a Kurdish woman who died, aged 22, in the custody of the country’s morality police in the capital, Tehran 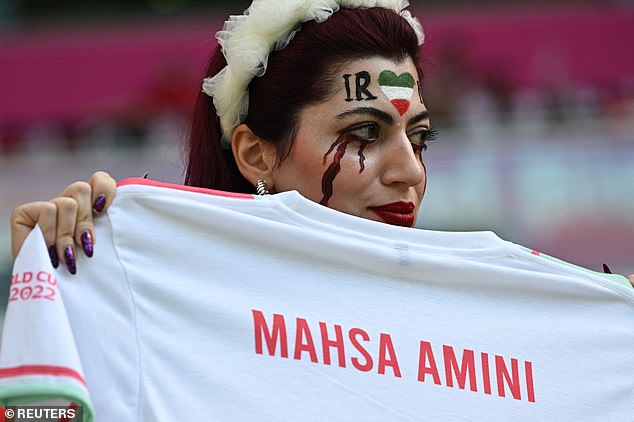 Pictured: An Iranian fan stages a demonstration inside the Ahmad Bin Ali Stadium – holding up an Iranian football shirt displaying the name of Mahsa Amini and the number 22 – her age when she died while being held by Tehran’s morality police. Protests have swept the nation since, resulting in the deaths of hundreds 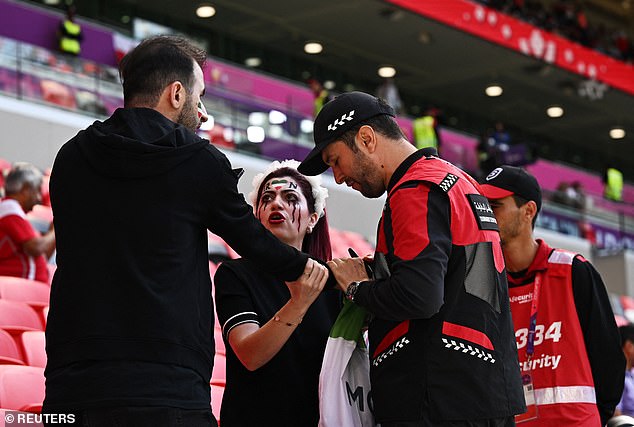 Images appeared to show police asking fans to remove the flags as they clamped down on protests in the ground.

The flags appeared to be Persian pre-revolutionary Iranian flags.

Others wore shirts with the slogan of the country’s protest movement, ‘Woman, Life, Freedom.’

Small mobs of men angrily chanted ‘The Islamic Republic of Iran’ at women giving interviews about the protests to foreign media outside the stadium.

Shouting matches erupted outside the security checkpoint at the between fans screaming ‘Women, Life, Freedom’ and others shouting back ‘The Islamic Republic.’

Many female fans were visibly shaken as Iranian government supporters surrounded them with national flags and filmed them on their phones. 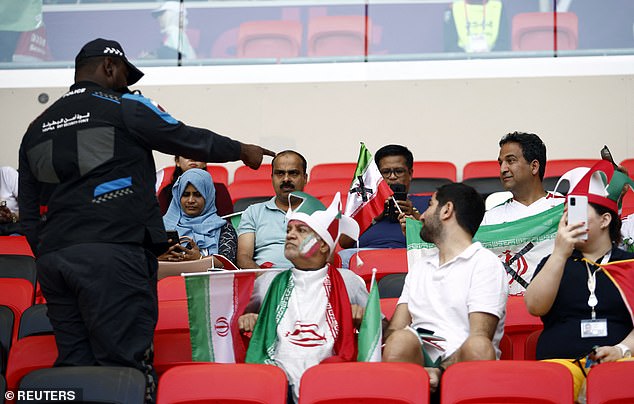 One 35-year-old woman named Maryam, who like other Iran fans declined to give her last name for fear of government reprisals, started to cry as shouting men blowing horns surrounded her and filmed her face up close. She had the words ‘Woman Life Freedom’ painted on her face.

Another woman named Vanya, 21, who lives in Qatar, said she was terrified to ever go back to Iran after what she experienced outside the stadium on Friday. ‘I’m genuinely afraid for my safety here,’ she said.

A group of fans wearing hats emblazoned with the name of the Iranian former soccer player Voria Ghafori, who was arrested in Iran on Thursday, said they had their hats stolen by government supporters.

‘It’s obvious that the match had become very politicized this week. You can see people from the same country who hate each other,’ said Mustafa, a 40-year-old Iran fan. ‘I think three arrest of Voria has also affected society in Iran a lot.’

Some anti-government fans waved signs in support of the protest movement at Iran’s first match against England earlier this week. Before that match, Iran’s players remained silent as their national anthem played. On Friday, they sang along.

The unrest in Iran was spurred by the Sept. 16 death of 22-year-old Mahsa Amini in the custody of the country’s morality police. It first focused on the state-mandated hijab, or headscarf, for women, but has since morphed into one of the most serious threats to the Islamic Republic since the chaotic years following its founding. 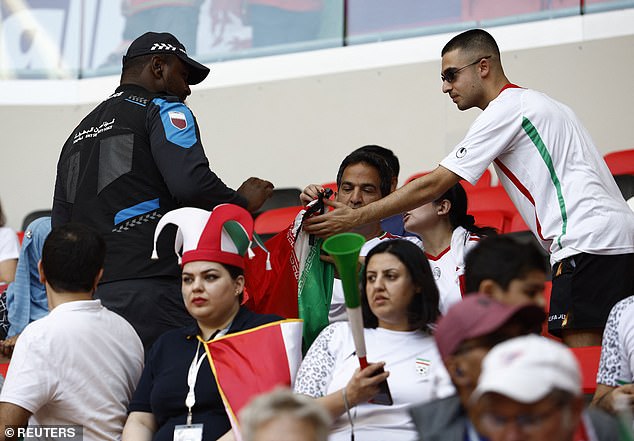 The largest migrant camp in Europe was set ablaze. Here’s what it looked like before and after the fires.

Canary Islands revealed as No.1 destination for newly divorced Brits