Experts have advised ‘sitting down before reading on’ as the latest forecast on the energy bill cap suggest customers could be paying several hundred pounds more than predicted earlier this week.

An analysis at energy consultancy Auxilione predicts the price cap on energy bills could reach an eye-watering £3,687 in October – close to double today’s already record levels.

Experts also see further rises in 2023 for the 24 million households whose bills are governed by the price cap. 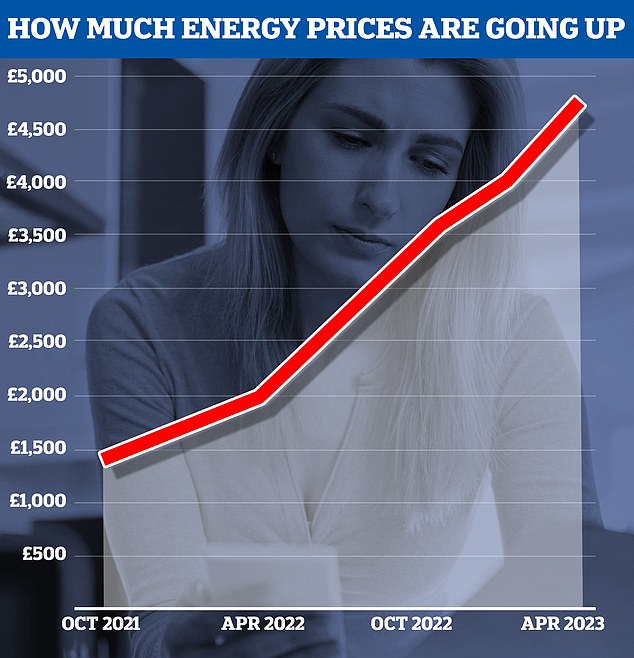 According to their analysis, the cap could hit around £4,400 in January, although the predictions came with caveats.

Auxilione said it was double-checking its figures due to changes made by energy regulator Ofgem to the price cap rules.

‘We release today’s view with a caveat that we are having to re-do our analysis this week to ‘double check’ that the outputs are correct. Be sure to be sitting down before reading on,’ it said.

The price could balloon further to £4,700 in April, the experts said, although they warned that forecasts so far ahead are more likely to be unreliable.

If true, it would mean a price cap more than four times higher than before the gas price crisis started last year.

Falls will not happen until July when the price cap might dip to £4,000 – but this is still double current levels. 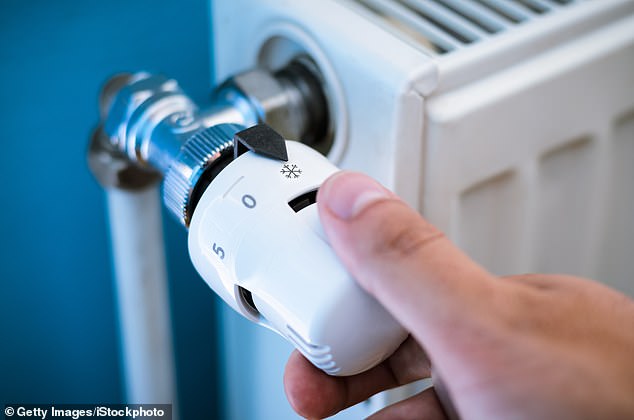 Auxilione said the changes – which added around £400 to the January price cap compared to Friday’s forecast – were largely due to new Ofgem rules that were announced earlier this week.

‘On Thursday, Ofgem released their final models including some changes to allowances within the cap, such as recovering some of these over a shorter period of time,’ it said.

‘Having now analysed these has left us wondering if these are showing the correct outputs.

‘Over the last 24 hours we have been comparing our values with other analysts who also seem to be in the same position as us – in disbelief at the values.’

What reasons does Ofgem give for changing the energy price cap frequency?

Ofgem has issued this list today of what it describes as ‘the wider benefits of a quarterly price cap’:

An Ofgem spokesman said: ‘The wholesale market continues to move extremely quickly so no forecast for next year is at all robust at this stage and will therefore have very limited value, especially for consumers who must always be the main priority.

‘We cannot stop others from making predictions, but we would ask that extreme caution is applied to any predictions for the price cap in January or beyond.’

If the provisional forecast is correct, it will mean serious hardship for many households struggling to keep their homes warm.

Experts recommend many techniques to cut back gas use. One of the simplest is to reduce the flow temperature on a boiler, which could save around £200 on an average energy bill.

The flow temperature is how hot the water going to your radiators is, by lowering it your boiler can operate more efficiently.

It does not change how warm your home becomes, although it might take a little longer to warm up. 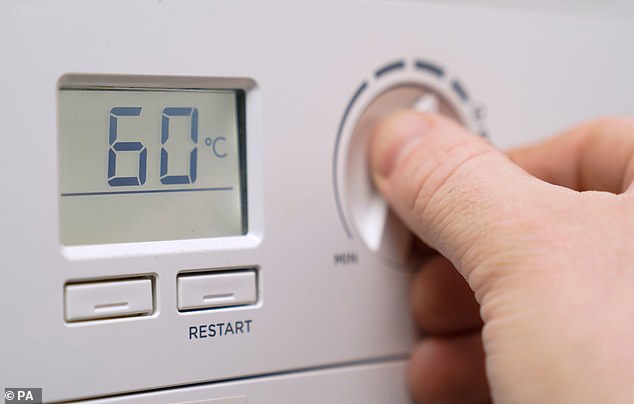 The technique only works for homes with a condensing combi boiler. Guides on how to do this can be found online.

Many boilers are also set to a ‘pre-heat’ mode, which constantly keeps a small amount of water hot for when you run the taps.

By turning this off it will take longer for your hot water tap to become warm, but it could save hundreds of pounds.

There are many other ways to reduce gas use, but most require an up-front investment which can pay off over time.

These include new insulation, servicing your boiler or radiators, swapping single glazing for double glazing and many more.

The head of energy regulator Ofgem has said that people should not join campaigns for an energy bill strike.

A movement called Don’t Pay has urged people to cancel their gas and electricity direct debit payments from October 1, with thousands of people already pledging their support.

In an interview with BBC Radio 4’s Today programme, Chief Executive Jonathan Brearley said: ‘I know everyone is extremely worried about paying their energy bill, but absolutely I would not encourage anyone to join a campaign like this for two reasons. 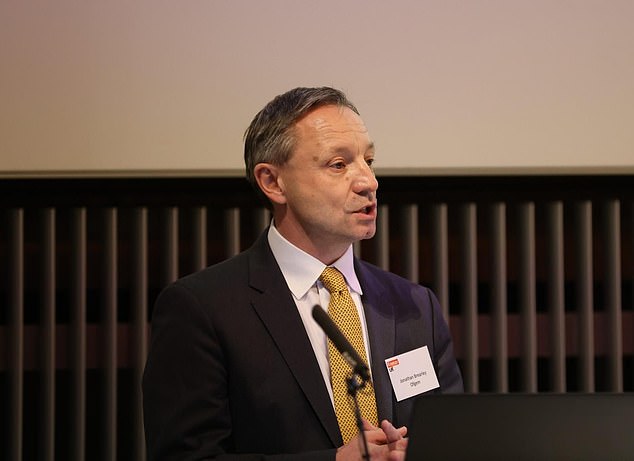 ‘First of all, it will drive up costs for everyone across the board. And secondly, if you are facing difficulty in paying your bill, the best thing you can do is get in touch with your energy company.’

He added: ‘I would not encourage anyone to withhold their paying their bill because that just damages things further and it will impact them personally.’ 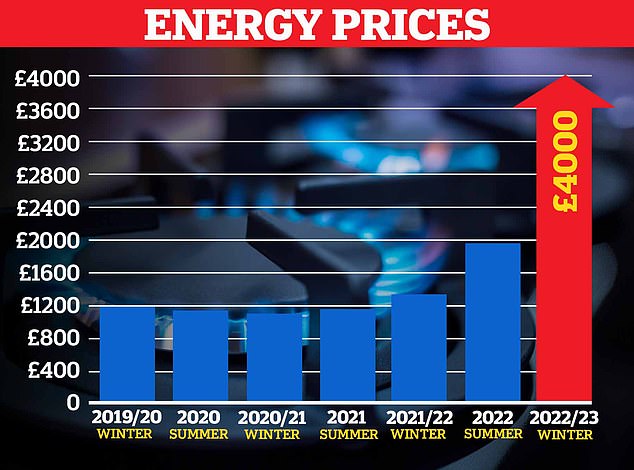 Don’t Pay said: ‘Millions of us won’t be able to afford food and bills this winter. We cannot afford to let that happen.

‘The plan is simple. We are demanding a reduction of energy bills to an affordable level. We will gather a million people to pledge not to pay if the government goes ahead with another massive hike on October 1.’

The group added: ‘Mass non-payment is not a new idea, it happened in the UK in the late 80s and 90s, when more than 17 million people refused to pay the Poll Tax – helping bring down the government and reversing its harshest measures.

‘Even if a fraction of those of us who are paying by direct debit stop our payments, it will be enough to put energy companies in serious trouble, and they know this. We want to bring them to the table and force them to end this crisis.’

A Don’t Pay spokesperson told ELN: ‘Ofgem’s abject failure to regulate the energy market over the past decade and protect consumers is one reason we’re in the state we are.

‘We’re facing a catastrophe this winter. Millions won’t be able to pay to keep their homes warm and that will result in thousands of people freezing to death. 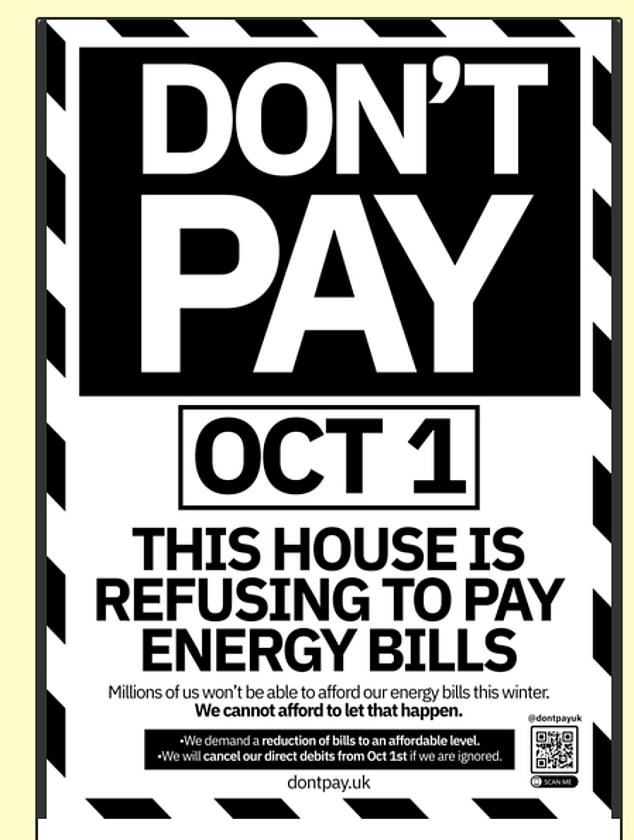 A movement called Don’t Pay has urged people to cancel their gas and electricity direct debit payments from October 1, with thousands of people already pledging their support

‘The only way we will avert this is if millions of us refuse to pay these extortionate prices and collectively force Ofgem and the government to act in the interests of the people and not the energy industry.’

It comes as Ofgem confirmed the energy price cap will be updated quarterly, rather than every six months, as it warned that customers face a ‘very challenging winter ahead’.

The energy regulator said this switch to changes every three months means ‘prices charged to bill-payers are a better reflection of current gas and electricity costs’.

Ofgem added that this will also allow ‘energy suppliers to better manage their risks, making for a more secure market helping to keep costs down for everyone’.

The London-based regulator claimed that the change to when the energy price cap is updated ‘will go some way to provide the stability needed in the energy market’. 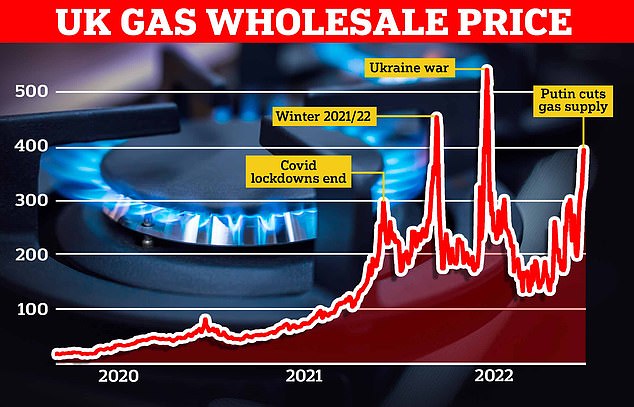 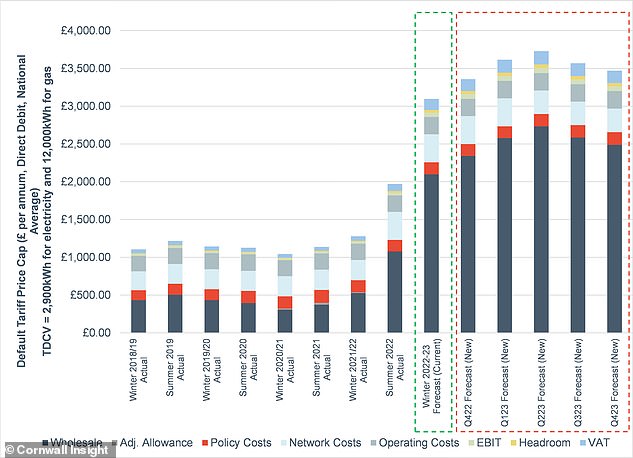 A Cornwall Insight forecast shows the energy price cap will stay higher than £3,300 from October to at least the start of 2024

Changes to the price cap come as household energy bills are likely to remain at more than two-and-a-half times their pre-crisis levels until at least 2024, according to latest predictions.

Cornwall Insight, one of the country’s most respected energy consultancies, said bills will hit a staggering £3,359 per year from October for the average household, and not fall below that level until at least the end of next year.

The price cap on energy bills, which regulates what 24 million British households pay, will hit £3,616 from January and rise further to £3,729 from April, it said.

4 in 5 adults plan to go out of their way to be kind this Xmas, study finds