A California district attorney is requiring her prosecutors to consider looters’ “needs” when weighing criminal charges against them.

The new mandate, set forth by Contra Costa County District Attorney Diane Becton, makes it tougher to prosecute looting cases in the county, which sits just outside San Francisco.

A SENATOR CONDEMNED LOOTING, THEN DELETED HIS TWEET. HOW DEMS ARE STRUGGLING TO ADDRESS RIOTS

In making that determination, they must also consider five other factors, including “was the theft committed for financial gain or personal need?”

The new policy comes amid the swell of protests, looting and riots in the wake of police-involved shootings of black people across the country.

Becton, a 22-year judge in Contra Costa County who was elected DA in 2017, is the county’s first female and African American to serve as the county’s chief law enforcement officer.

Her new policy drew strong rebukes from Antioch Mayor Sean Wright and the president of the Antioch police union. 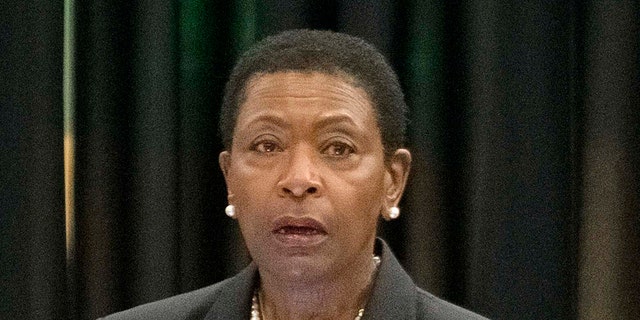 Contra Costa County District Attorney Diana Becton makes a statement prior to the sentencing of Joseph James DeAngelo in Sacramento Superior Court held at CSU Sacramento in Sacramento, Calif., Friday, Aug. 21, 2020. DeAngelo, a former California police officer who became known as the Golden State Killer told victims he’s “truly sorry” before he was sentenced to life imprisonment for a decade-long string of rapes and murders across a wide swath of California. (AP Photo/Randall Benton)

“When I read the policy, it was disturbing,” Wright told East County Today. “I understand the difference between protesting and looting. Peaceful protesting is okay, looting is not.

“For the District Attorney to put out that kind of plan is irresponsible and where do you exactly draw the line on need because these are people’s businesses that are being impacted and livelihoods that are being destroyed.”

BIDEN’S CONDEMNATION OF RIOT VIOLENCE ‘TOO LATE,’ TRUMP SAYS; WHAT THE RECORD SHOWS ON DEM'S RESPONSE

DA spokesman Scott Alonso said the new policy was put in place because of the coronavirus pandemic and noted that the office has no recent evidence of prosecuting looters during a state of emergency.

“As you know, when evaluating any criminal case our prosecutors look at the circumstances surrounding the incident,” Alonso told East County Today. “These guidelines are consistent with how we evaluate criminal cases. The policy does not say we won’t file these types of cases.”

Looting carries a sentence of one year in county jail.

The article consists of 11 pieces of criminal justice reform that they say are designed to fix a “flawed system” that wrongly targets black people and people of color.

British millionaire's £350,000 watch stolen off his wrist in St Tropez