A U.S. Navy Seabee was killed and five other Seabees were hurt early Tuesday when several military vehicles were involved in a chain-reaction crash near Camp Pendleton in California, according to reports.

The crash occurred just before 7 a.m. on Interstate 5 near San Onofre State Beach, about 20 miles away from Camp Pendleton, the California Highway Patrol told FOX 5 of San Diego.

It happened about 175 miles away from where a separate crash in Holtville killed at least 13 people, also on Tuesday morning.

The convoy was traveling from Ventura County to Camp Pendleton to pick up equipment that was used in a field exercise, Lt. Cmdr. Amber Lewis of Naval Mobile Construction Battalion 5 told the San Diego Union-Tribune.

The sailor who died was 26 years old but was not named, pending notification of family members.

The five injured service members were also all in their 20s, with one man suffering severe injuries and two men and two women suffering minor injuries, the CHP said, according to the report.

All of the sailors were members of Naval Mobile Construction Battalion 5, based at Naval Base Ventura County, the Union-Tribune reported. 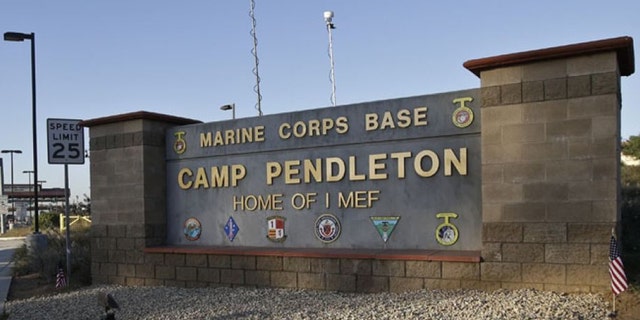 An entrance to Camp Pendleton in California.

The chain-reaction crash of five trucks, each weighing seven tons, occurred after the convoy vehicles began to slow down for a reason that remained unclear, the CHP said, according to the Orange County Register.

The sailor who died was injured when the trailer of the sailor’s truck pushed forward into the cab, the highway patrol told FOX 5.

The injured service members were taken to Camp Pendleton Naval Hospital and Mission Hospital in Orange County, the station reported.

After the accident, two southbound lanes along a stretch of Interstate 5 were closed and traffic was backed up to the Orange County line while an investigation was underway, the Union-Tribune reported.