A British mother living in La Palma has told of her plight after she was forced to flee home with her young son after a volcano on the island erupted.

Nikki Batley, 46 and originally from Essex, fled her house in the town of Todoque with her 11-year-old son John on Sunday when a series of earthquakes triggered an eruption on the Cumbre Vieja ridge.

Now staying with husband Pedro Castro Ramos at a friend’s apartment, Ms Batley said she has been home only once – on Tuesday, accompanied by firefighters, to save whatever she could fit into her car.

Since then the family have been unable to do anything other than watch from a distance as a slow-moving river of lava inches towards the home, which is now just ‘hours away’ from being swallowed up. 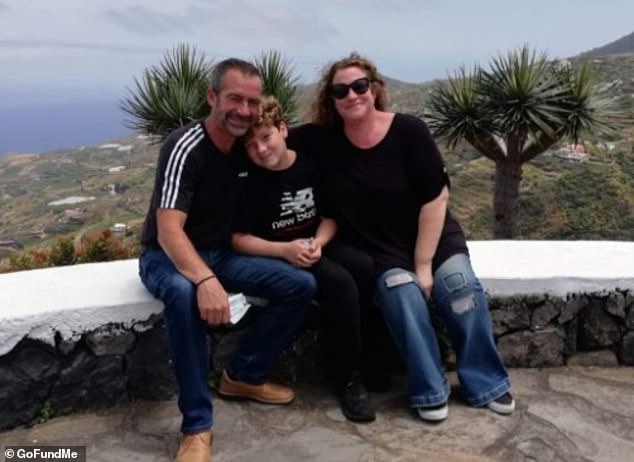 Nikki Batley, 46, fled her home on La Palma on Sunday as volcano erupted and is now staying in friend’s apartment with husband Pedro Castro Ramos and son John (pictured together) 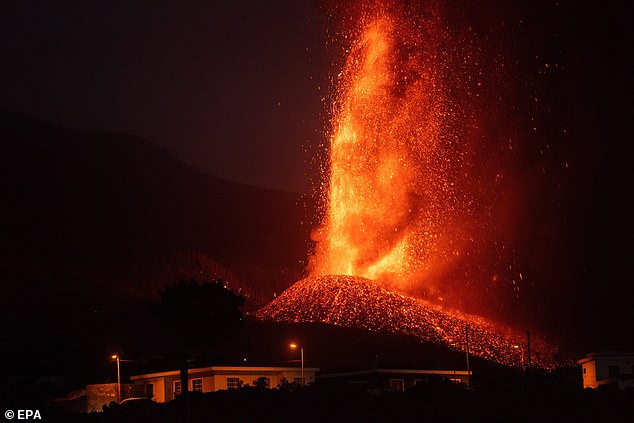 Ms Batley described the eruption as ‘terrifying’, adding that she was holding back tears as she rushed her son and elderly mother-in-law into a car and drove away 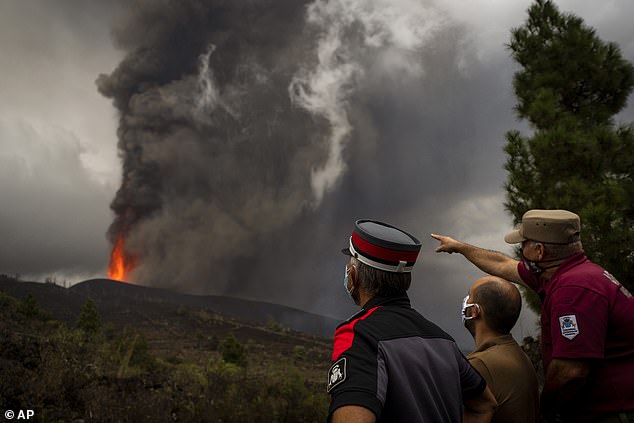 Lava has been inching its way towards the family home ever since and is now just ‘hours away’ from swallowing it completely, Ms Batley said

Speaking to the i newspaper on Wednesday, she said the lava was expected to reach their property ‘within hours’ – though it has since slowed to a crawl, and the current fate of the house is unknown.

Like many others on the islands, Mr Batley said the family have no insurance and will be forced to start again ‘from zero’ if their house is consumed.

Describing the moment the volcano erupted on Sunday afternoon, she said: ‘I honestly have never in my entire life felt so terrified.

‘When the mouth of the volcano opened, it is literally directly above us…

‘My partner immediately called saying, it’s exploded, it’s right above where you are, get out now. I had to get my mother-in-law, keep her calm, get my dog and my son and we legged it.’

Ms Batley – a musician and English teacher – has lived on the island since 1998 after moving there from her hometown of Harlow.

She met husband Pedro – a chef – 15 years ago, and the couple live with his mother in the house that she grew up in.

The 81-year-old woman was at home on the day of the eruption, with Ms Batley saying she was ‘in such a state’ as she was forced to leave the house behind.

Even if their home survives, it is likely to be many weeks before they can return to it because molten rock has covered many roads in the area.

John’s school, which was next to the family home, will almost-certainly be damaged if-not swallowed entirely, Ms Batley added.

The family are currently staying in an acquaintance’s apartment which they must vacate at the end of the month. After that, they plan to sleep in the car.

Ms Batley has set up a GoFundMe page seeking donations to help the family get back on their feet.

They are among 6,000 people who have been forced from their homes by the eruption, which began around 3pm Sunday and may continue for months.

While some have managed to find accommodation with relatives or friends, many others are being housed in sports facilities and an old army barracks in the capital of Santa Cruz de la Palma.

Most have no idea when they will be able to return home, if they even have a home to return to. The eruption has intensified since it first began, with volcanologists saying on Wednesday that it had entered a ‘new explosive phase’.

Lava has been spewing from four vents in the ground, creating a slow-moving stream that is steadily burning up surrounding homes and farmland.

Some 350 houses have been destroyed by the molten rock so-far, EU satellite monitors say, with 410 acres destroyed.

Officials say 1,000 more buildings are at risk of being damaged or burned down, as the lava edges its way towards the sea.

Observers had initially predicted the lava would arrive there on Tuesday, dropping into the water and limiting the amount of damaged caused on land.

But it has slowed significantly since then, and now experts warn it might never reach the water – instead pooling on land and spreading out like a pancake, threatening further destruction.

Lava flows have already reached 40ft high in some places – easily able to overwhelm even tall buildings – and may continue to rise as layers cool and harden. 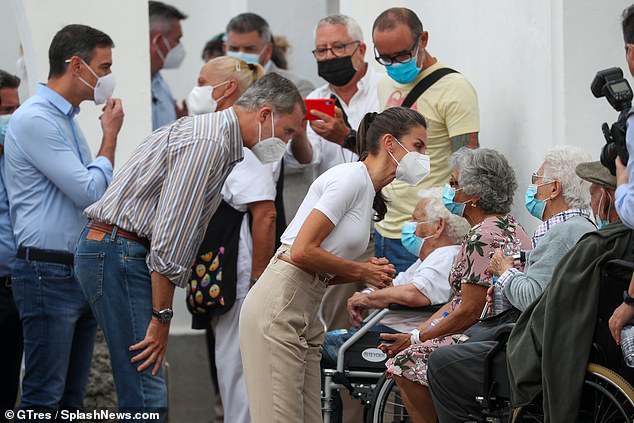 Queen Letizia and King Felipe visited the island today, speaking with some of those who have been evacuated from their homes 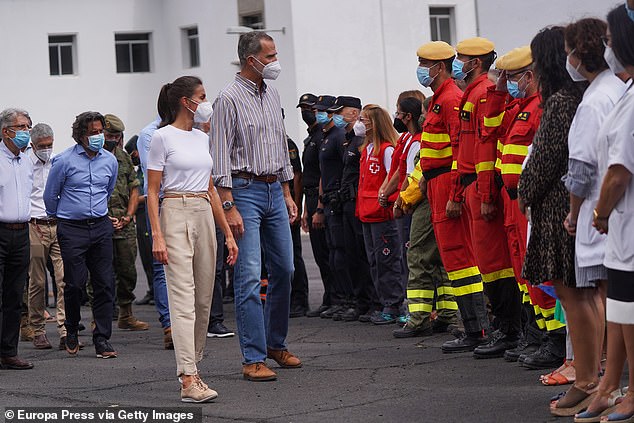 The Spanish royals also met with fire crews who have been battling to keep homes safe, including digging artificial channels to try and divert lava away 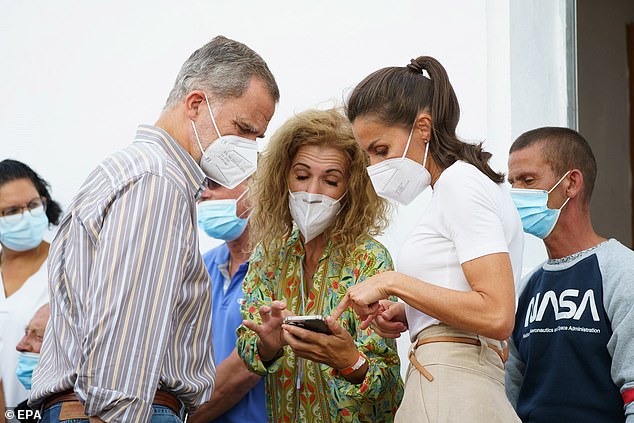 The lava’s slowing pace bought time for more residents of towns in its path to grab belongings, with the Guardia Civil police force escorting them to their homes in Todoque, close to the coast, on Thursday morning.

The Guardia Civil said seismic activity in the area, which surged before the eruption and has remained strong, has stabilized.

But molten lava, ash and smoke continued to pour from the volcano’s mouth, shooting up to 4,200 meters (nearly 14,000 feet) high, the Canary Islands Volcanology Institute said. That raised concerns about whether airspace above the island could remain open.

ENAIRE, which manages Spain’s airspace, said two areas above the affected area are being declared no-fly zones to allow emergency services to operate freely. Many flights into and out of La Palma were delayed early Thursday.

Authorities haven’t reported any casualties from the eruption, though damage to property, infrastructure and farmland is expected to be significant.

Scientists were monitoring the volcano activity and had warned of a possible eruption. That allowed almost 7,000 people to be evacuated in time.

Spain’s King Felipe VI and Queen Letizia, and Prime Minister Pedro Sanchez, visited La Palma on Thursday and met with some of those made homeless.

Officials had initially expressed fears about what would happen when the lava reached the Atlantic Ocean. The lava, whose temperature exceeds 1,000 C (more than 1,800 F), could cause explosions, trigger landslides and produce clouds of toxic gas when it hits the ocean, experts say.

The eruption and its aftermath could last for up to almost three months, according to the Volcanology Institute.

Life on the rest of La Palma, which is roughly 35 kilometers (22 miles) long and 20 kilometers (12 miles) wide at its broadest point, has been largely unaffected, with undeterred tourists landing for previously scheduled vacations.

The Canary Islands are a popular destination for European tourists due to their mild year-round climate.

The islanders mostly live from farming and tourism.