Boeing deals with NEW defect on its 787 Dreamliner in latest slip-up: Titanium parts on planes built in the last three years are weaker than they should be and $25 billion of the unused jets STILL sit in its inventory

Boeing is dealing with an alarming new defect on its problem-plagued 787 Dreamliner, which involves certain titanium parts that are weaker than they should be, according to a new report.

The defect is on 787s built over the past three years, and is among the Dreamliner issues that has led to $25 billion in jet inventory piling up on Boeing’s hands, the Wall Street Journal reported on Thursday, citing people familiar with the matter.

In a statement to DailyMail.com, a Boeing spokesman confirmed that the company had received a notice from a supplier about ‘certain 787 parts that were improperly manufactured.’

‘While our investigation is ongoing, we have determined that this does not present an immediate safety of flight concern for the active in-service fleet,’ the spokesman added. 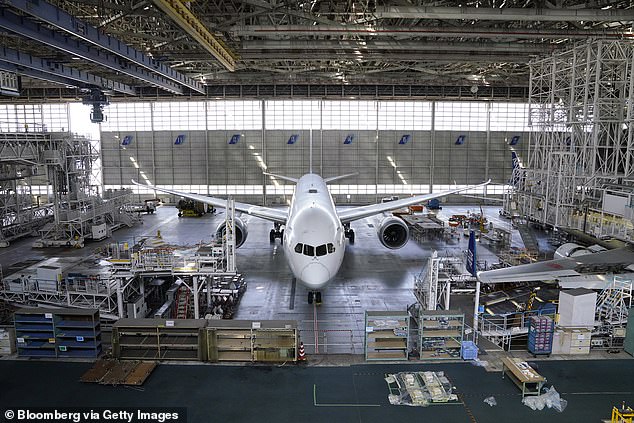 A Boeing Co. 787 Dreamliner aircraft, center, is seen under maintenance in ANA’s hanger at Haneda Airport in Tokyo, Japan in April

The statement continued: ‘Yet-to-deliver airplanes will be reworked as necessary prior to customer delivery. Any potential fleet actions will be determined through our normal review process and confirmed with the FAA.’

The apparent titanium defect is the latest evidence that Boeing is still struggling to fix production issues, following CEO David Calhoun’s push to improve the planemaker’s reputation for quality and safety.

Boeing has grappled with a host of manufacturing issues in recent years, in addition to the two deadly 737 MAX crashes that grounded that model of jet for nearly two years.

Last month, Boeing launched an urgent internal investigation after empty tequila bottles were found inside a top-secret Air Force One jumbo jet being built at the company’s Texas factory.

The Dreamliner has been particularly plagued by concerns, which have caused it to cut production and halt deliveries of the larger 787.

Deliveries of Boeing’s 787 Dreamliner, suspended since May, likely won’t resume until at least the end of October amid disagreements with US safety regulators at the Federal Aviation Administration.

Dreamliner deliveries were suspended for much of the past year, including between last November and March, after Boeing uncovered manufacturing defects. 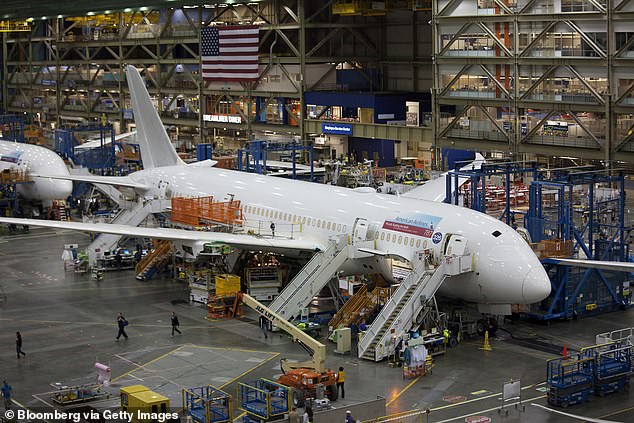 787 airplanes are manufactured at the Boeing Co. facility in Everett, Washington in a file photo. Boeing is dealing with a new defect on its 787 Dreamliner, which involves certain titanium parts that are weaker than they should be

The company announced in July that it had spotted additional problems near the nose of the plane and was working to fix them.

‘We are making progress as we apply our Quality Management System to improve first-time quality in our production and delivery system,’ a Boeing spokesman told DailyMail.com in a statement.

‘As part of these efforts, we continually raise the standards we hold ourselves to. We have strengthened our focus on quality and constantly encourage all members of our team and supply chain to raise any issues that need attention,’ the statement added.

‘When issues are raised, that is an indication that these efforts are working. Even where these efforts result in a near term impact on operations, we’re confident it’s the right approach to drive safety, stability and first-time quality for the long term,’ the spokesman said.

Boeing said on Tuesday that its airplane deliveries rose to 35 in September as it benefited from an uptick in domestic travel. 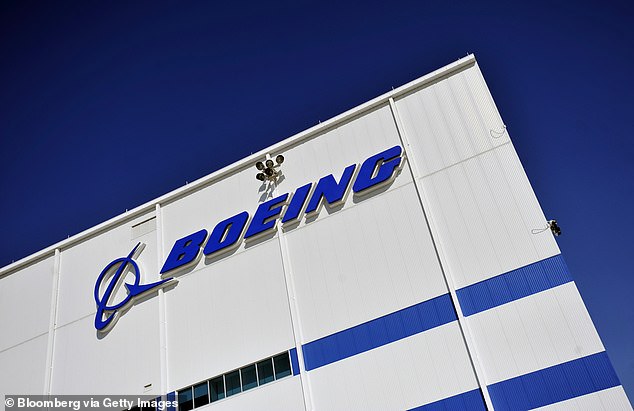 That was 13 more planes than in August and 24 more than in September last year.

Of the 35 jetliners delivered last month, 26 were 737 MAX passenger jets and one was a P-8 maritime patrol aircraft to the U.K. Royal Air Force.

But the 787 program remains hobbled by structural defects and deliveries remain on pause.

The closely watched monthly snapshot comes as Boeing tries to recoup billions of dollars in lost sales from the coronavirus pandemic, and move beyond a safety scandal caused by the fatal 737 MAX crashes.

Boeing also said it delivered eight widebodies including one 747-8 freighter to United Parcel Service, two 767 freighters to FedEx Corp and one 767 tanker for the U.S. Air Force.

Of these, 194 were for its best-selling 737 MAX jets which returned to service in late 2020 following a near two-year safety ban.

Boss of boutique sues ex-friend who 'fleeced her out of £1.3million'