Just when we all started to think about that one day in September on Saturday, a mob riot caused mayhem.

Then just when we thought the turmoil and destruction of the week might be over, the earthquake struck. 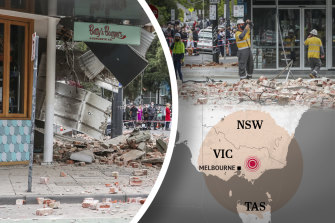 Melbourne residents were left shocked after the earthquake.Credit:Jamie Brown

It’s rare moments like this week full of chaos when you start to seriously question all the things you thought you knew for certain. Like being a part of a calm, safe, caring society. Or knowing that the earth was firm under your feet.

It seems like there’s been a profound seismic change, a fundamental rupture both in society and in the earth beneath us.

Ironically, this week also sees the vernal or spring equinox, which falls on September 23, a time of equilibrium and balance in nature.

For those who slept through that hot Tuesday afternoon when this was taught in science class, the equinox is caused by the Earth being tilted on its axis, when the sun lines up perfectly with the equator giving us 12 hours equally of day and night.

While that term comes to us from Latin (ver meaning spring, aequus meaning equal and nox, night) unsurprisingly the derivation of earthquake is much more direct and prosaic, coming from old English.

If things feel to be reeling out of control right now it may be because rare events like an earthquake or annual events like the vernal equinox that remind us all human activity is insignificant when compared to the immense power of nature.

It’s also a reminder that in a week that brings us so much athletic heroism (and so much selfish nihilism on the streets of Melbourne), for all our scrabbling around down here on Earth, our footy passions, our disagreements, our violent insurrections and wars, nature just carries on with supreme indifference. That’s true of small events like the local weather and larger ones like earthquakes.

For the last 50 years, post-modern thought has emphasised culture over nature, even thinking nature could be a cultural construct. Nature, meanwhile, rolls its eyes and quite frankly, doesn’t care.

The idea that man can control nature and indeed has a right to do so is woven into Australian history since 1788 when Europeans arrived to declare the land was terra nullius (more Latin).

Of course, it was a fiction. But more than that it betrayed the idea that the land was a God-given blank slate for us to write on as we pleased, without any thought or care for it.

Tragically that cavalier attitude informs so much government policy today, from our refusal to deal with the climate crisis, our blind insistence that we can mine and farm the country with a careless disregard for any environmental consequences and our stubborn refusal to examine our history – the good and the bad.

All of Australia, but Melbourne in particular has gone through nearly two years of disruption and seismic changes. The vast majority of people have faced the turmoil with admirable stoicism. Some, like our doctors and nurses have revealed themselves to be true heroes. 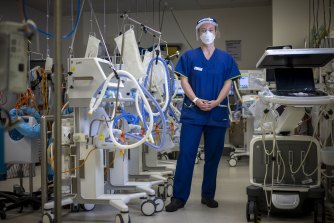 Healthcare workers like ICU nurse Tayla Christofakakis, of the Austin hospital, are preparing for a third wave of COVID. Credit:Wayne Taylor

But of course, there have been the wild-eyed zealots, the anti-vax grifters, the underground far-right networks and their boosters in the media.

It seems like these people don’t just want to make a political point; they want to tear down civilised society. They disdain social cohesion.

In the face of this, we feel like old certainties have deserted us. We can’t even be sure the earth is steady under our feet. So, what can we do?

The answer may lie in the fact that in many countries the vernal equinox marks the first day of spring, and some ancient cultures regarded it as the first day of the year; the chance to look ahead with confidence.

And on Saturday all eyes turn to Perth for a historic grand final. The opportunities for inventiveness and possibility still exist right in front of us.

So, a week that has seen Melbourne shaken both literally and metaphorically to its core might just end on a note of hope and optimism.

Duncan Fine is a lawyer and regular columnist.

Adam Perkins cause of death: Vine star's twin pleads with fans to stop asking how he died

The wives of Morecombe and Wise couldn't STAND each other

Boy, 16, fighting for life after being knifed in the stomach in North London