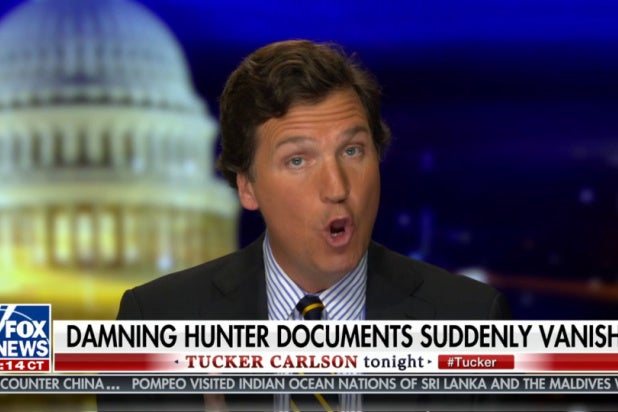 Tucker Carlson spent most of his show on Wednesday once again pushing conspiracies about Joe Biden’s son Hunter, and this time we got a new wrinkle. Tucker told a story about how his show had a source that gave them a bunch of secret new documents about the Biden family. But then those documents, Tucker claimed, were stolen in the mail when his producer in New York tried to send them to Tucker in California.

“There’s something specific going on behind the scenes right now that we did feel we should tell you about. So on Monday of this week, we received from a source a collection of confidential documents related to the Biden family. We believe those documents are authentic, they’re real and they’re damning,” Tucker said, not providing any information at all about what the documents contained.

“At the time we received them, my executive producer Justin Wells and I were in Los Angeles preparing to interview Tony Babulinski about the Biden’s business dealings in China, Ukraine and other countries. So we texted a producer in New York and we asked him to send those documents to us in LA, and he did that.”

Carlson didn’t explain why they needed to mail the documents instead of emailing or faxing copies, which would no doubt have been faster and cheaper. You can watch Tucker’s story, which is so devoid of details that it’s nearly impossible to verify, below.

“So Monday afternoon of this week, he shipped those documents overnight to California with a large national carrier, a brand name company that we’ve used, you’ve used, countless times, with never a single problem. But the Biden documents never arrived in Los Angeles. Tuesday morning, we received word from the shipping company that our package had been opened and the contents were missing. The documents had disappeared,” Carlson claimed.

“Now to its credit, the company took this very seriously and immediately began a search. They traced the envelope from the moment our producers dropped it off in Manhattan on Monday all the way to 3:44 a.m. yesterday morning. That’s when an employee at a sorting facility in another state noticed that our package was open and empty. Apparently it had been opened. So the company’s security team interviewed every one of its employees who touched the envelope we sent. They searched the plane and the trucks that carried it. They went through the office in New York where our producer dropped that package off. They combed the entire cavernous sorting facility.

“They used pictures of what we had sent so the searchers would know what to look for. They went far and beyond but they found nothing. Those documents have vanished. As of tonight, the company has no idea and no working theory even about what happened to this trove of materials, documents that are directly relevant to the presidential campaign just six days from now. We spoke to executives at that company a few hours ago. They seemed baffled and deeply bothered by this, and so are we.”

Carlson, who a judge recently ruled is not a credible source of news, did not say whether the mailed documents are the only copy, or whether the loss of the physical mail has impeded the show’s investigation into these alleged documents in any way. Carlson likewise provided no information that would even indicate whether this story is true since it contains no verifiable details.

'Jeopardy!': Alex Trebek on His Early Game Shows – 'Damn, I was Good'

Normal People season 2: Will Paul Mescal return for another series?

'The Batman' is Using Virtual Production Techniques Pioneered in 'The Mandalorian'