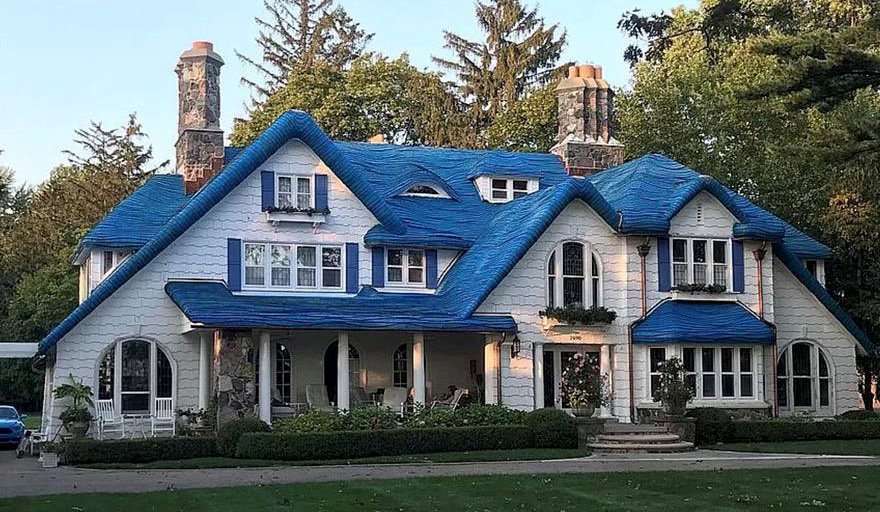 Let’s say you watched The Smurfs as a child and thought: ‘yes, this is the life I want to lead’.

If you don’t fancy building your own mushroom house in the forest, this property could be a worthy alternative.

Why? Because the roof is the vibrant blue of your favourite Belgian pals.

But be warned: you’ll need quite a hunk of cash to make your Smurf living dreams come true.

The seven-bed, eight-bathroom property in West Bloomfield, Michigan, is on the market for $4,199,000.

That’s a lot of money when you could just… paint the home you already have a cheery Smurf hue.

The house is pretty special, though.

Built in 1920, the property is known as Smurf House – for obvious reasons – and has received a load of attention since being listed on Zillow.

Despite its name, it’s not thought the home was designed for Smurf fans.

Instead, the blue, wavy design on the walls and roof is supposed to connect with the lake that sits right nearby.

The home sits on 2.92 acres of land, with 175 ft of Pine Lake’s shoreline and a dock that extends into the water.

It’s thought that the roof has always been blue, except for a short period in the 1940s when the entire house was painted green… when perhaps it could have been called Hulk house.

There are some other interesting quirks inside, including a formal ballroom with a small stage for a three-piece band.

Oh, and it might be haunted. We’ll just throw that out there to sweeten the deal.

Someone on Twitter said: ‘This house going viral in Zillow circles belongs to my uncle and for 15 years I have told everyone I know not to go inside because it is haunted as s**t.

‘Cannot overstate how much I stayed for one weekend in the mid-aughts and something still lingers in the corner of my eye.’

Who is Marsha Thomason and is she married?

'The Brady Bunch': Why Florence Henderson Called the Spinoff Variety Show 'Going From the Penthouse To the Basement'