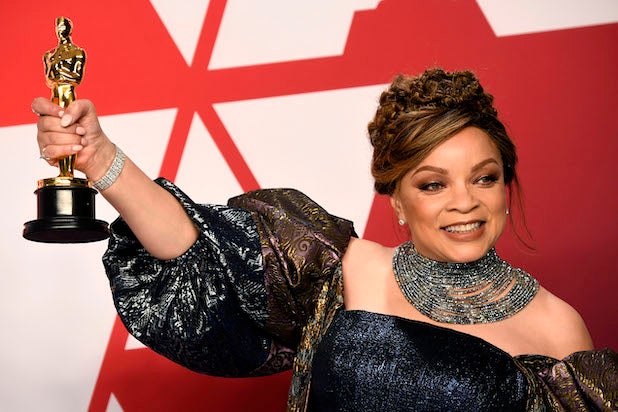 Ruth E. Carter, the legendary costume designer known for working on films like “Malcolm X,” “Amistad” and “Black Panther,” will receive a star on the Hollywood Walk of Fame on Thursday, making her only the second costume designer to ever be recognized.

The other costume designer is Edith Head, who was honored in 1960 back when the Walk of Fame was first created. Carter though has already made history, as she’s the first Black woman to ever win the Oscar for costume design, doing so for her work on “Black Panther” in 2018.

Carter will be recognized in a star dedication ceremony on Thursday at 11:30 a.m. PT, and guest speakers Oprah Winfrey and Eddie Murphy, with whom she worked this past year on “Coming 2 America,” will honor her at the ceremony. And though the ceremony this year will be virtual, the Ruth E. Carter star will be put in place at 6800 Hollywood Blvd. You can stream the ceremony through the walkoffame.com website.

Carter got her start when she met Spike Lee at the Los Angeles Theater Center in 1986, who hired her for his second film “School Daze.” She has since collaborated with him on “Do the Right Thing,” “Mo’ Better Blues,” “Jungle Fever,” “Oldboy,” “Da Sweet Blood of Jesus” and was nominated for an Oscar for “Malcolm X.” She was also nominated for an Emmy for the TV series “Roots.”

Carter has also worked with legendary directors such as Steven Spielberg and John Singleton and has dressed actors from Denzel Washington to Josh Brolin and actresses from Angela Bassett to Oprah. She’s come to be known for her costumes inspired by traditional African tribal wear merged with a contemporary look delivering fashion and function, even incorporating technology in a way that has made her style one of the top voices in Afrofuturism.

In addition to work on television, Carter has also made her foray into consumer fashion with a Conscious Collection collaboration with H&M featuring Carter’s ’90s street-inspired look from her early films. Her next film, “Coming 2 America,” debuts on Amazon Prime Video on March 5.

Sexy Beasts: Viewers are freaked out by ‘bizarre’ show, but can’t look away