Good Morning Britain’s resident doctor, Hilary Jones, shut down presenter Piers Morgan when they discussed yesterday’s coronavirus press conference which was held by Chris Whitty and Sir Patrick Vallance. The scientists warned Covid-19 deaths will increase as infections surge, but Piers wanted to know where they had plucked the number 50,000 from – the possible number of cases per day which could be seen by the middle of October unless action is taken.

“[I want] Government to explain why they are doing what they’re doing,” Piers began.

“And how they’ve come to this figure!

“At the moment, they’ve got this ridiculous situation, where you’ve got two advisors coming out saying ‘We’re not predicting what will happen, we’re just saying what is likely, possibly, may happen’ – which is a prediction! Which is 50,000 cases by the middle of October.

“And the questions people are asking – who are more skeptical than me, and it’s a valid question; what are you basing that on?” he added. 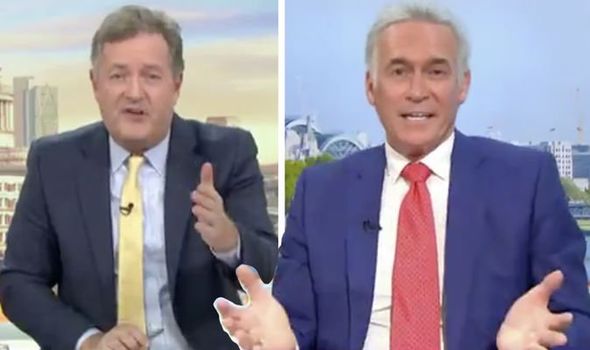 Susanna Reid said: “How do you get to those figures if Germany, France, Spain -“

But Piers’ rant was not over as he continued: “If the answer is doubling every seven days, as they wrote in the Telegraph, that means the entire country – if we do nothing – would’ve ended by New Year’s Day.”

“No it doesn’t!” Dr Hilary replied.

“It does,” Piers stated but the medical professional hit back: “It doesn’t.”

“It does,” Piers reiterated.

Laughing at his co-star’s stubbornness, Dr Hilary said: “It doesn’t!”

“If you say it doubles every seven days, that’s where you get to by January 1st,” Piers explained.

“No, but Dr Hilary, do you think, if cases are going to double, then there is going to be a point where everybody, eventually has got the virus,” Piers added.

“But how do you get to 50,000 by the middle of October?” the presenter questioned once more.

“But if you want the headline to be 50,000, that’s the figure they used, that’s what they did, but they haven’t explained what they’re basing it on, given that in every other country, nobody is projected to be near that by middle of October,” Piers continued.

“And that’s the problem that the people who are sceptical about this and don’t want any action, are saying ‘Why? Why have you reached that figure?’

“And that’s what Boris Johnson has to answer today, he has to tell the British public why we have arrived at 50,000,” he concluded.

Good Morning Britain airs weekday mornings at 6am on ITV.

Beat the Chasers branded a ‘fix’ by ITV viewers after £50K win: ‘Are you kidding me?’