2 John Wells Dramas in the Works at HBO Max, Including ‘Things That Make White People Uncomfortable’

Three colors of Chromecast TV devices are displayed during the Google Launch Night In virtual event seen on a laptop computer in Tiskilwa, Illinois, U.S., on Wednesday, Sept. 30, 2020. Alphabet’s Google launched a new Chromecast TV device as it seeks to hold off Amazon from continuing to gain share in the smart home space. Photographer: Daniel Acker/Bloomberg via Getty Image

Battle of the Streaming Devices: Can Google’s Revamped Chromecast Catch Up to Roku and Amazon Fire?

Google’s recent unveiling of its new Chromecast with Google TV shows the tech giant is aiming to jump past Roku and Amazon Fire TV when it comes to being the top streaming device on the market. Whether it’ll get there remains to be seen — and there’s a fair amount of ground to make up.

If you missed it, Google debuted its new streaming device last week, seven years after Chromecast helped launch streaming into the zeitgeist. Chromecast with Google TV (its revamped interface, formerly known as Android TV) looks to offer a top-flight streaming experience, complete with 4K resolution and Dolby Atmos audio technology. Customers will also probably like that it now comes with a remote control, at long last, and at $50, is priced competitively.

It was a much-needed makeover for Chromecast. Right now, the device, with 18% marketshare, is in third place behind Roku and Amazon Fire TV in the U.S., according to new data provided by Ampere Analysis. The top two devices are tied with a 31% hold on the market; Apple, which makes its Apple TV streaming device, is in fourth place with 11% of the U.S. market.

Here’s a look at the U.S. streaming device market: 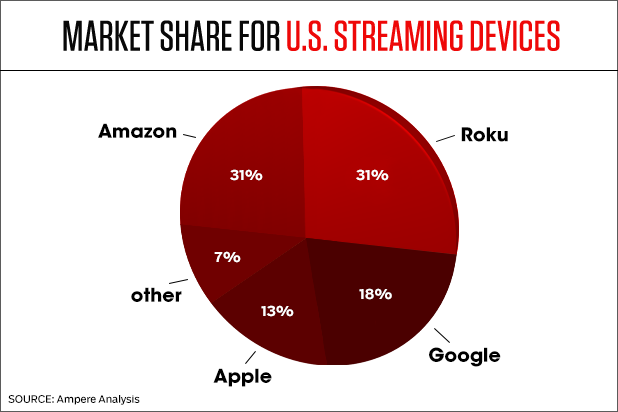 To win over more customers immediately, Google has also partnered with Netflix on a bundle deal. For $90, customers can get six months of Netflix’s standard plan to go along with their new Chromecast with Google TV — saving them about $40 over a half-year.

This, coupled with Google’s push to make the device easier for non-Android customers to use, was a smart move, according to Ampere Research Director Richard Broughton.

“Chromecast has historically been at a disadvantage relative to streaming device peers such as Roku and Fire TV due to its inherent reliance on a link to another device — typically an Android smartphone or tablet — to drive it,” Broughton said. “The new Chromecast with Google TV now functions more fully as a standalone TV player, is suitable for those consumers who use non-Android mobile devices, and has launched with a number of promotions, including [its] Netflix-Chromecast bundle.”

Despite the adjustments, Broughton isn’t convinced Chromecast will have enough steam to run past the top two.

“The market is increasingly commoditized, and wrestling market share from Amazon and Roku in the U.S. will be an uphill struggle, given the existing app coverage of these devices and their entrenched brands and installed bases,” Broughton added.

Omdia analyst Sarah Henschel was a little more bullish on the new Chromecast, saying it’s a “great” addition to the device market. And on top of that, Chromecast should benefit from the overall device market expanding in the U.S. and internationally, she said. The pie is getting bigger, essentially.

“There is a lot of room for this market to grow,” Henschel told TheWrap.”Omdia anticipates the digital media adaptor landscape to grow 39% worldwide from 2020 to 2024… Google should have the tools and strength to propel this product to be a strong competitor.”

Amazon is notoriously tight-lipped about its streaming data, but Roku’s most recent quarterly report gave a peek at how popular streaming has become. Roku’s 43 million active accounts watched 14.6 billion hours of data last quarter — coming out to about 3.77 hours of content streamed each day per account.

So far, the early reviews for Chromecast with Google TV have been mixed. CNET said Google finally had a “worthy competitor” to Roku and Fire TV, lauding its updated interface and fresh remote. The New York Times’ review was less enthusiastic, calling the device’s recommendations algorithm — based on what the search giant already knows about you — was “inconsistent.”

Even if Google has a hard time surpassing Roku and Fire TV, as Broughton predicts, the new look may still help land a bronze medal among the top devices — and cut into the market share lead of its competitors. With TV shipments booming, streaming services like Netflix and Disney+ racking up new subscribers, and movie theaters struggling due to COVID-19, the device business looks poised to keep growing. Staying in third place may not be too bad.

'This Is Us': Milo Ventimiglia Admits That He Frequently Cries While Reading the Show's Scripts

Peter Andre's son Junior, 15, looks all grown up as he hangs out behind the scenes of his first movie

Game of Thrones House of the Dragon cast: Who will play Rhaenys Targaryen?