Every person I’ve spoken to about Dave Burd’s new semi-autobiographical series, “Dave,” is already aware of the FXX comedy’s key art. You probably are, too — it’s the one with a close-up of a man’s crotch. All you can see are pink, flowered boxer briefs with a waistband that says “Dave,” and there’s something else… something… what could it be… ah, yes: There’s a small bearded man popping out of the pouch giving you a thumbs up. In other words, this unseen dude has a tiny man where his penis would be — or, more specifically, he has Lil Dicky where his dick would be, which serves as the cute in-joke for those who recognize Lil Dicky as the small bearded man and as a brash, baffling turn-off for everyone else.

For what it’s worth, the poster accurately reflects what the new series is about. “Dave” tracks a rapper whose stage name is a dick joke, and yes, much of “Dave” features the kind of crude, dick-based humor you’d expect from early-aughts Judd Apatow comedies, or “Eastbound & Down,” or “Da Ali G Show” — all of which, when combined, give a decent idea of what to expect from “Dave.” The eponymous lead describes his professional identity as a parody of the posturing bro-energy found in conventional rap music, and, as the first season progresses, “Dave” feels like it’s ready to apply that mentality to its own stories. Though the soft-spoken artist still gives into a masculine self-obsession not far removed from the insecure men constantly talking up their endowment, there’s enough wit, creativity, and compassion for skeptics to take a second look and fans to invest wholeheartedly.

When the series begins, Dave Burd (played by himself) has already made a name for himself on YouTube as Lil Dicky. His videos have garnered millions of views, but he hasn’t been able to monetize those play-counts. He has no record deal, no perceptible level of respect in the music industry. In his late 20s with an unshakable faith in his talent, Dave spends most of the pilot trying to make an impression on YG, a rapper he hopes will perform alongside him in a new song.

In reality, Dave Burd followed a similar track, breaking out on YouTube with “Ex-Boyfriend” in 2014 before releasing his debut album, “Professional Rapper,” in 2015, featuring guest artists like Snoop Dogg, Fetty Wap, T-Pain, and more. Now, he’s got more than 6.5 million YouTube followers, and, of course, his own show on FXX. By all accounts, “Dave” looks to capture his rise to prominence while shedding more light on who Dave is when he’s not being Lil Dicky. 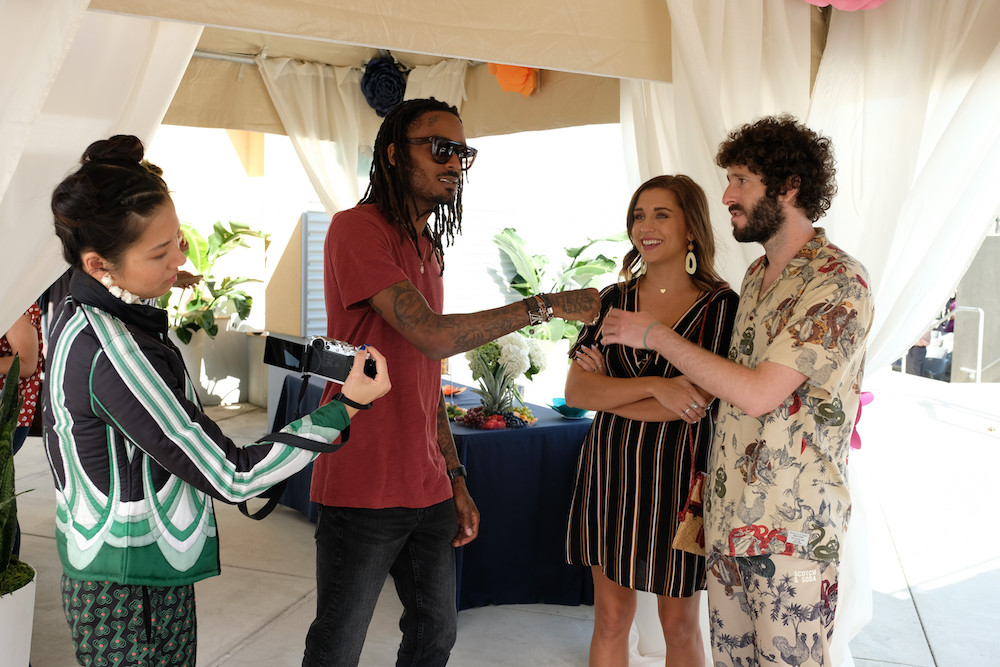 Helping out with the latter are his friends, business associates, and girlfriend, including: Travis Bennett as Elz, a burgeoning audio engineer and Dave’s friend since childhood; Andrew Santino as Mike, Dave’s roommate and the only member of the inner circle who works a real job (he’s in finance); GaTa as GaTa, Dave’s on-stage hype man and new addition to the tight-knit crew. Finally, Taylor Misiak plays Ally, a schoolteacher and Dave’s long-term girlfriend, who serves whatever purpose the show needs. Whether it’s a student dying so Dave can craft an awkward performance for his wake or her quest for better sex leading to Dave divulging hidden truths about his penis, Ally is kept to stock girlfriend territory in the first five episodes, even if Misiak does her damnedest to make her stand out.

Unsurprisingly, much of what makes “Dave” worth watching is Dave himself. In the pilot, the character is an unimposing yet persistent dreamer who has a curiosity that’s hard to ignore — you want to see what this guy’s about, if he’s a gullible sucker, if he’s a street-savvy artist, if he’s any good at all — and co-creator/-writer Jeff Schaffer’s script stealthily builds to a performance you didn’t know you were waiting for: Lil Dicky’s songs, for those who don’t know, are easy to get caught up in and quite catchy. Watching him work is entertaining by itself, but the story around each performance either enhances the lyrics’ good humor or glimpses the general rapping excellence he’s promised.

At times, Dave can turn into the douchey, selfish, oh-too-typical dude he’s supposed to be parodying, which makes “Dave” harder to watch. A few simple, silly episodes feel a little too phoned in, but they could just be practice rounds as the show finds its feet. As the first season progresses, “Dave” expands its vision and finds fresh depth. Through five half-hour episodes, it’s hard to say exactly what the show will become, or how its explicitly macho storylines fit into a culture focused on elevating women’s voices, but there looks to be more going on than the poster implies.

“Dave” premieres Wednesday, March 4 at 10 p.m. ET on FXX. Episodes are available the next day via FX on Hulu.