Chief engineer Byron Hissey from Below Deck Sailing Yacht offered a few photos and snippets about what happens behind the scenes of the show. 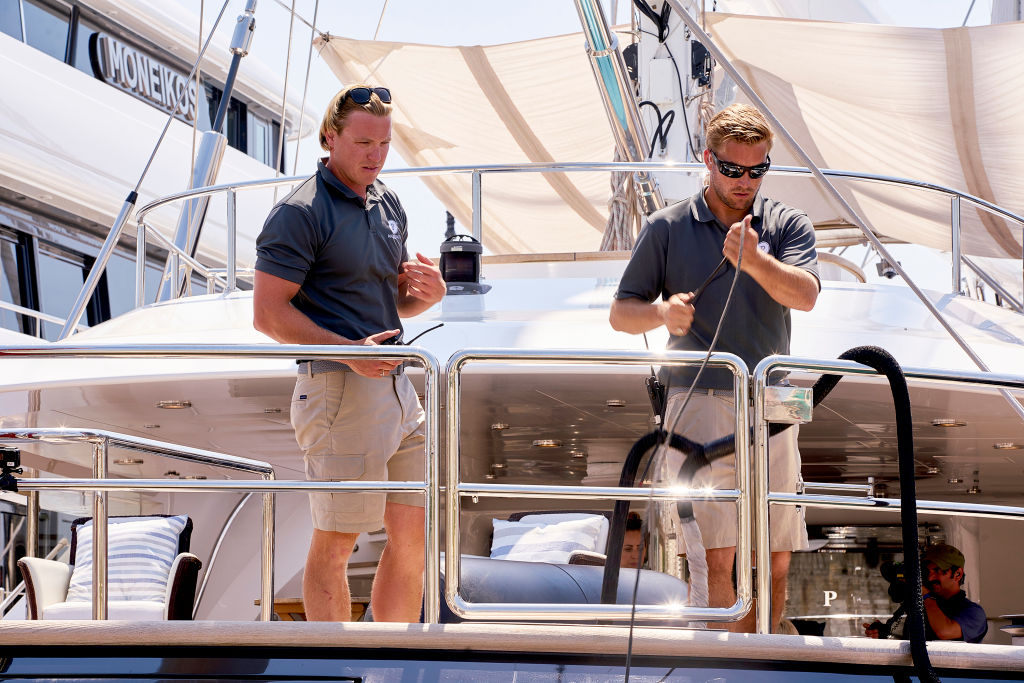 Hissey is the crew member who likes to grab a photo of the cameraman in action and he recently shared that those cameras are pretty heavy to carry. “Behind the scenes from tonight’s episode,” he shared on Instagram on the evening of the season finale. “The cameras are really heavy and the (production) crew work really hard.”

“The editing team do an amazing job putting it all together. It’s all filmed real time, as it happens, reality style. There’s no “say that again, do that again, action!” Like in the movies. #Bravo to all!” he added.

Hissey also shared another photo of the cameraman who was stationed near the galley kitchen, with a heavy camera sitting atop his shoulder.

Hissey shared that while the show is shot in real-time, he credits the editors for putting the storylines together. But crew and guests have said that some truly funny moments were left on the cutting room floor.

Below Deck guest, Linda P. Jones blogged about her experience and said she wished editors would have aired some of the funnier moments she had on the show.

This is the cameraman filming Jenna and Adam in the galley. More footage available at OnlyFans.com ? Check out my Cameo profile: https://v.cameo.com/y5xbIy9RA6

RELATED: This ‘Below Deck’ Charter Guest Spills About Whether the Show Is Real or Fake

“When we all went into dinner, he [Captain Lee Rosbach] joined us, and again we enjoyed listening to his stories and having a fun conversation,” she wrote. “I don’t know why Below Deck didn’t use any of that conversation. They barely had us saying anything, so I’m not sure why they choose certain moments over another. There were some funny things that happened that didn’t make it onto Below Deck.”

But some still think they get a bad edit

Jones also insists the show is completely realistic. “The show is 100 percent real,” she wrote. “The producers of the show basically said, we want to create an amazing trip for you. Just have a good time. Don’t worry about the camera, don’t think about it. Just enjoy yourself.”

But one Below Deck guest insisted he was portrayed to look like he was obsessed with his phone while on charter. Charles Michael Yim, Breathometer creator from Below Deck season 6 shared on Instagram that producers thought his group was boring. So they created a storyline for them. He insisted, “they edited the footage to make it seem that we were on our phones all the time but that wasn’t the case.”

RELATED: This ‘Below Deck’ Charter Guest Insists the Show Is Fake (and Which Crew Member He Shades)

The notion behind an overly edited storyline bubbled to the surface when an editor from Vanderpump Rules admitted she edited cast member Scheana Shay to look boy crazy during the season.

“If Scheana knows what’s good for her, she’d befriend me because my favorite game is finding all the embarrassing things that Scheana does and putting them all in,” editor Bri Dellinger said on a podcast, Page Six reported. The editor was fired after publicly admitting cast members were edited with a certain slant.

The Witcher episode 4 explained: What happened in Of Banquets, Bastards and Burials?

'The Blacklist' Season 9: Here's Why Some Fans Think They Haven't Seen the Last of Megan Boone