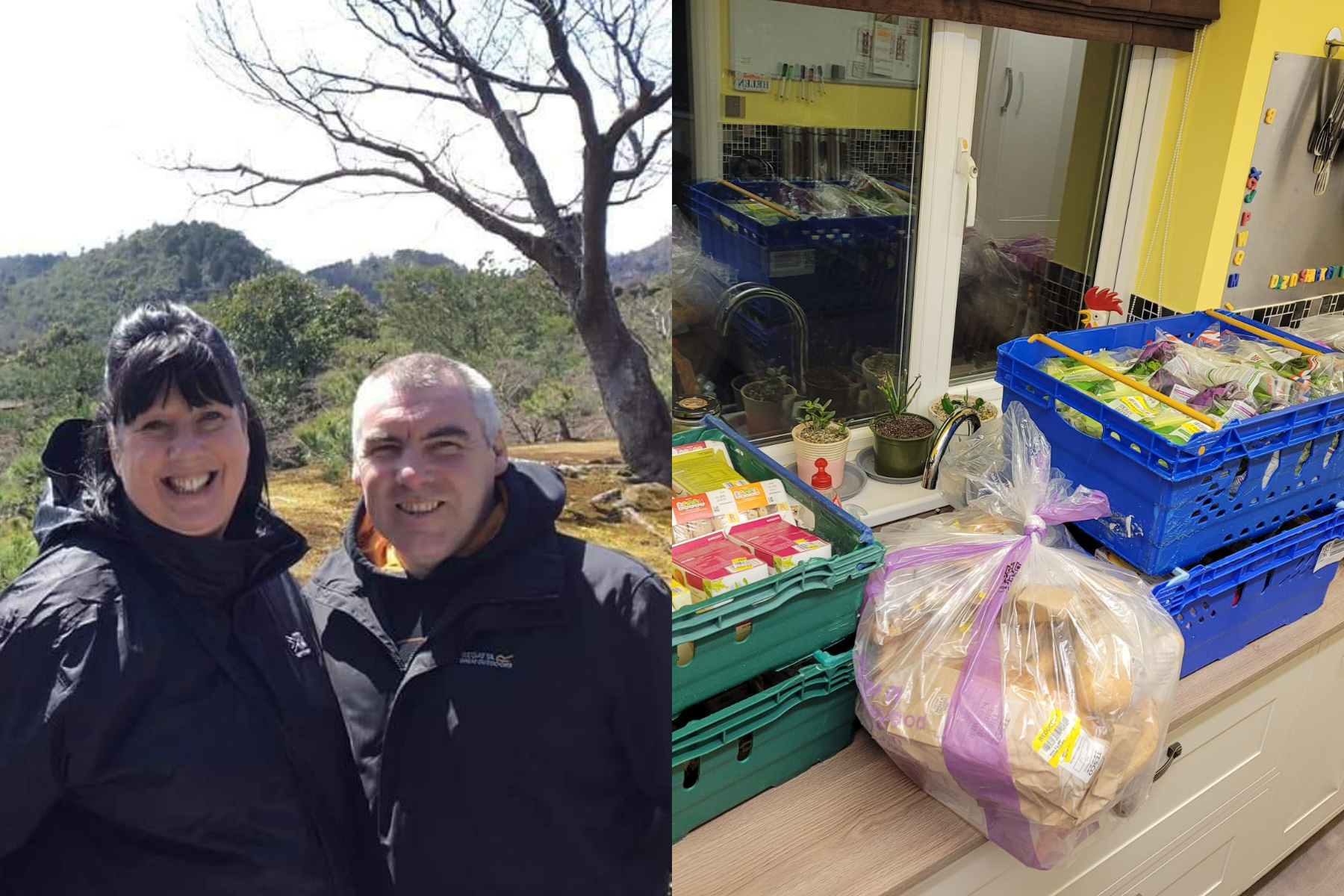 A savvy saver has slashed her weekly shops by £50, spending as little as £4 a week on her grocery shopping.

Helen Morrison, 55 from Newcastle-upon-Tyne, started cutting down her food costs and waste after she quit her job as a wedding planner in November 2021 for a better work-life balance.

Using a free sharing app, OLIO, along with switching from mainstream supermarkets to community grocery stores, Helen, who also lives with her husband Darren, 56, became a whizz in the kitchen, concocting fabulous feasts out of free food.

Alongside cutting down food waste, Helen has cut her weekly shop for two by £50, now only spending as little as £4 a week to top up her cupboard items.

‘Normal people go to the supermarket in the day and buy their shopping.

‘Instead, I sit on the app from about half past eight at night waiting for the food. I would say that 75 per cent of our food is from OLIO.’

Originally a wedding planner, Helen left her job in the hope of finding a better work-life balance; however, due to the switch she was forced to re-evaluate her spending.

‘At 55 I decided it was time to take an easier job in life,’ said Helen.

‘I worked as a wedding planner. It was a fabulous job but it was seven days a week and there was no life balance at all.

‘I had to re-evaluate my life, however that meant less money coming into the household.

‘So, I started researching tips on how to save money and somebody mentioned OLIO.

‘By January I was so impressed I decided to become a food waste hero myself. I now have regular collectors and I love doing it.’

Shocked at the amount of leftover food from her collections, Helen started planning ingenious ways to keep groceries from going in the bin.

‘I collect on my way home from work,’ she said.

‘I make a plan of everything we have and how I’m going to use it.

‘Vegetables are prepped and bagged and frozen. I make my own soups and freeze portions using one a day for our lunches at work.

‘I make my own sauces for pasta as tomatoes are often not requested on OLIO. I simply add in some of my frozen herbs to give them flavour.

‘Any herbs collected are blitzed in the food mixer and frozen in ice cube trays with a bit of oil for future use.

‘I’ve become very experimental over the summer months. I’ve put cocktail sausages in a pasta dish, it was weird but delicious.

‘I don’t think I’ve ever been as adventurous as I am now. I’ve started putting creme fraiche in pasta and I would never have bought that before.’

And the kitchen whizz has even started making her own butter.

‘You put the cream in a food mixer and you literally just put it on for five to 10 minutes.

‘It’ll go like whipped cream first, then it looks a bit cheesy and then eventually all of the milk comes out of the cream and you’re left with butter.

‘You can add garlic or parsley – or even make chilli butter.

‘The price of butter at the moment is ridiculous and this way it tastes even better in the morning!’

‘The main bulk of my food comes from OLIO,’ explained Helen.

‘But I also use a couple of other facilities. One of them is called The Bread and Butter Thing.

‘You get three bags of shopping for £7.50. You don’t know what it will be, but you know you’ll get a selection of fruit, veg and cupboard staples.

‘I also use the community grocery store, which is £4 for five fruit and veg items and you can get seven shelf items.

In 10 months Helen has slashed her weekly shop by £50, only needing to stop at her community grocery store every couple of weeks for essentials.

‘If I purchase from the Bread and Butter Thing I spend £7.50 but that lasts for around two weeks,’ said Helen.

‘Some weeks I don’t need anything, so I probably spend that every few weeks.

‘One of the biggest things for me and my husband is our work lunches, we used to spend five pounds a day each and now we spend nothing.

‘It’s definitely not a normal lifestyle but it’s saved us a lot of money, especially now the cost-of-living crisis is having an effect on so many of us.’

However, alongside her shop costing less, Helen is determined to help stop food waste.

‘The amount of food waste that’s out there really upsets me,’ said Helen.

‘It’s crazy to me that people won’t use certain food items just because of the best before date. We really need to rethink our attitude to food.

‘We shouldn’t turn our nose up at reduced items. We have to start thinking differently because there is nothing wrong with this food that we are throwing away.’

Advising fellow savers to not be shy, the OLIO food waste hero is on a mission to get more people collecting bread.

She said: ‘I feel good that I’m sharing the food and giving it away, and I have regular collectors.

‘Just last Friday I had 12 people at my door to collect food.’

She added: ‘Batch cooking is a great way to save money.

‘You just have to be adventurous. I think we all need more of a basic knowledge of how we can keep our food a bit longer – such as freezing.

‘We always have so much surplus bread when I do a collection. People don’t seem to realise that you can freeze it.

‘It’s a staple, and some families can go through a loaf of bread a day.

‘So, if that’s two pounds a day, over the week, that’s 14 pounds that you’ve saved. It’s just crazy money.

‘We’ve saved so much and I’ve managed to have a better work-life balance because of it!’