Artem Chigvintsev and Brie Bella gang up on Nikki Bella in this EXCLUSIVE preview of ‘Total Bellas.’ Artem and Brie prank Nikki by saying their neighbors saw her skinny-dipping!

Artem Chigvintsev reveals to Nikki Bella that he got a text from their neighbors saying they can see Nikki naked when she’s skinny-dipping in her pool. “Apparently, they can see you being naked, and because they have two kids, they feel really uncomfortable,” Artem continues in this EXCLUSIVE preview of the Dec. 10 episode of Total Bellas.

Artem and Brie Bella tease Nikki and keep up the skinny-dipping charade. At first, Nikki doesn’t believe Artem and Brie. However, as they keep talking about it, Nikki begins to get worried. Brie tells Nikki that the boys who saw her naked were underage, and their mother said it was “inappropriate” for them to see an “older woman naked walking around in the backyard.” 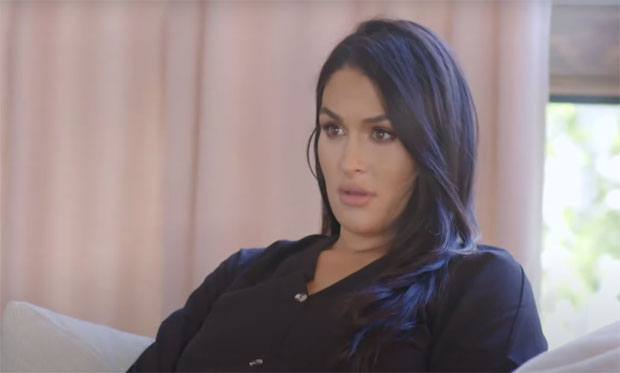 Brie also brings up the idea that a video of Nikki skinny-dipping could possibly wind up on the internet. She wonders in front of Nikki if the “kids” who saw her would post a video. Nikki says she’d “sue” them if they posted a video of her skinny-dipping. Artem and Brie’s acting skills were pretty superb during this prank! 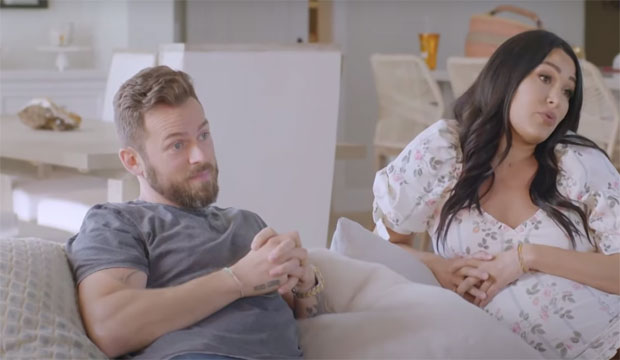 Artem and Brie finally give up on their prank and tell Nikki they were joking about being caught skinny-dipping. “You f**king suck,” Nikki tells them. They had her convinced for a hot second!

Also during the episode, the “babymoon” in Flagstaff comes to an end. Brie and Nikki also disagree with their mom about who should be invited to their baby shower.

At the time of filming, both Nikki and Brie were pregnant. Nikki gave birth to her and Artem’s first child, Matteo, on July 31, 2020. Brie and hubby Daniel Bryan welcomed their second child, Buddy, just 22 hours later on Aug. 1. Total Bellas airs Thursdays at 9 p.m. on E!