On your mark, get set, go! Sophie Wessex dons her trainers as she runs the first 1.5 miles of the London Marathon in support of learning disability charity Mencap

The Countess of Wessex donned her trainers to run the first 1.5 miles of the Mencap team’s virtual London Marathon in Windsor today.

Sophie, 55, joined the team’s run in Great Windsor Park alongside Tomas Cardillo-Zallo, one of the 312 people running for the charity.

Dressed in black running leggings and sporting a pink and white marathon Mencap vest logo, the royal looked in high spirits – despite the torrential rain.

A video showing Sophie and Tomas – who is a member of the charity’s Learning Disability Running team – putting in their best efforts during the marathon has been shared on the Royal Family’s Instagram account. 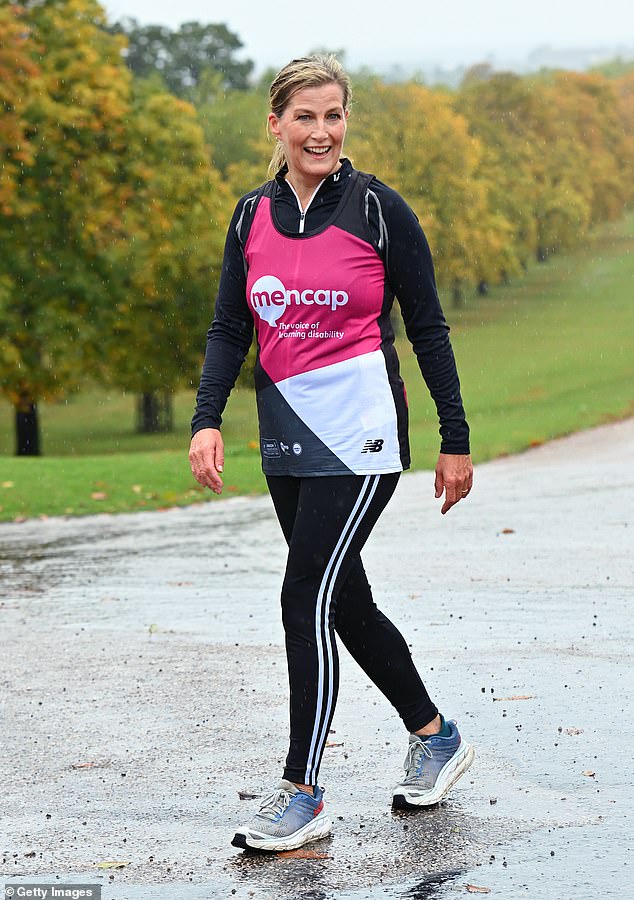 Sophie, 55, joined in on the Mencap team’s run in Great Windsor Park alongside Tomas Cardillo-Zallo, one of the 312 people running for the charity today

She said: ‘It was an honour to join Tomas, even just for a small part of his triumph today, as he completes the virtual London Marathon in support of Mencap.

‘Tomas has shown what people with a learning disability can achieve with the right support. He is an inspiration.’

Sophie, a mother-of-two, looked the perfect athlete in light blue and grey trainers,  and didn’t seem bothered by the rain, her blonde locked scraped back in a neat ponytail.

Mencap, which was created in 1946 by Judy Fryd, a mother whose child had learning disabilities, became one of the queen’s patronages in 1986. 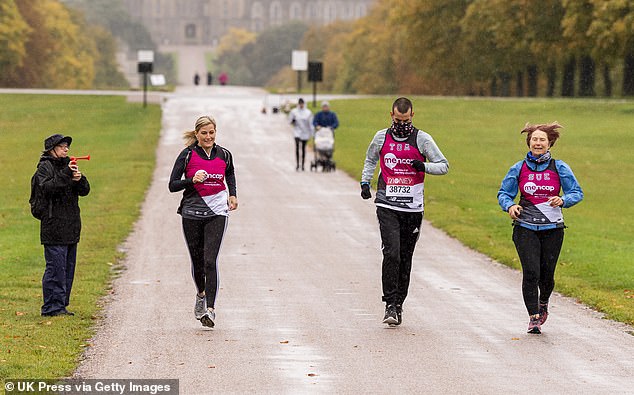 Dressed in black and grey running gear, the Countess of Wessex looked in good spirits despite the torrential rain in Windsor

The charity offers support for carers and families of children with learning disabilities, as well as the children themselves.

In 2004, Sophie Wessex took over the charity’s patronage and has been involved in promoting its message ever since.

Sophie and Tomas were among the 45,000 who took part in today’s virtual London Marathon.

Ethiopia’s Shura Kitata emerged from the rain and the gloom to become the new champion of the men’s London Marathon – as Kenyan world record holder Brigid Kosgei reigned supreme in the women’s race. 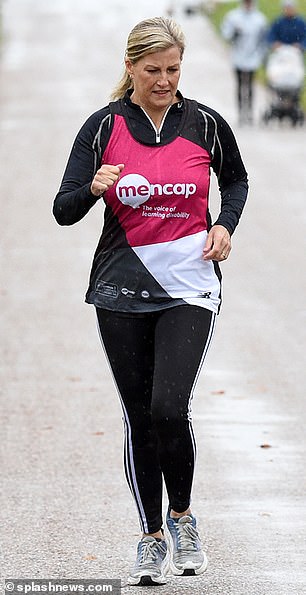 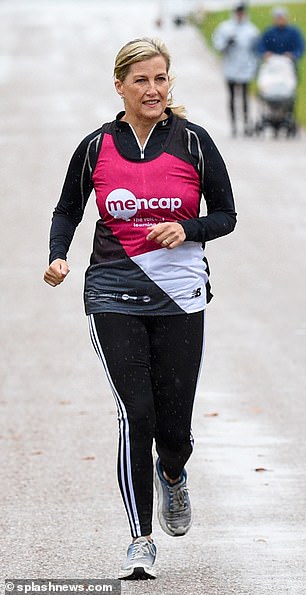 Sophie, a mother-of-two, looked the perfect athlete in a black vest and matching trousers as as she made her way across the Great Windsor Park 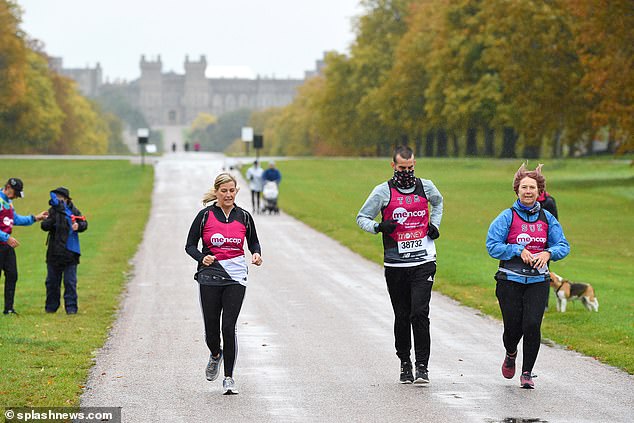 Sophie joined Tomas Cardillo-Zallo, (centre) who was running to support Mencap, and is a member of the charity’s Learning Disability Running team 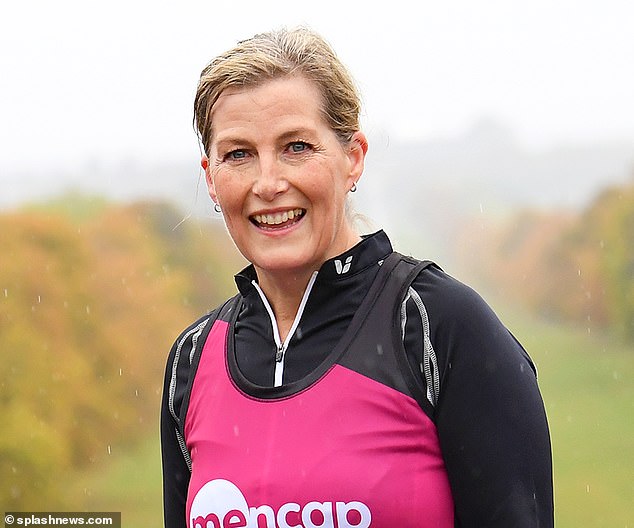 Only elite athletes were allowed to brave the pouring rain to run over 19.8 laps of a fenced-off course in a ‘controlled secure biosphere’ around St James’s Park, London, today after the usual mass event was scrapped due to the coronavirus pandemic.

The annual race was due to take place on April 26 but was pushed back to October 4, and it was later decided only the elite athletes would be able to compete in central London.

To ensure all runners at the official event keep a safe distance apart once they finish the race, all athletes and race staff must wear Bump devices around their necks. They will beep if two wearers get too close to each other.

In an address to participants, the Duke of Sussex praised the ‘extraordinary spirit’ of runners taking part from his home in Los Angeles. 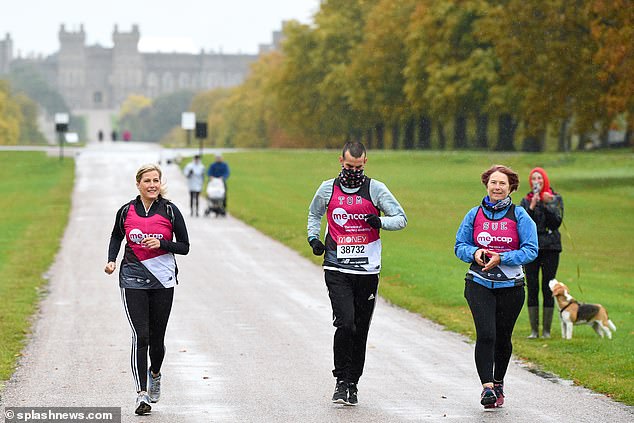 Sophie was running to support the charity Mencap, of which she has been the patron since 2004 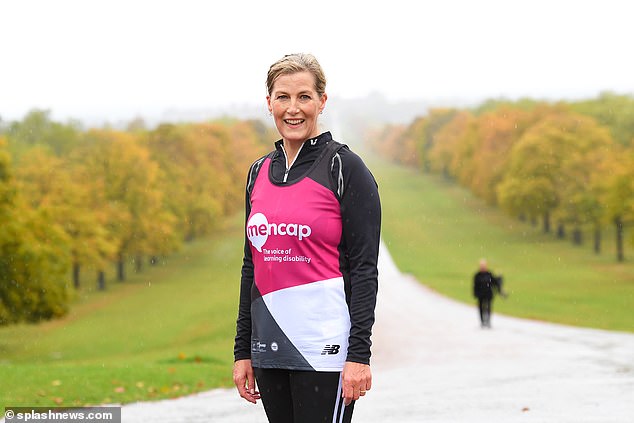 Top form! The Countess of Wessex looked pleased after she ran all the way across the Great Windsor Park this morning

Sophie (pictured left and right) was one of the 45,000 amateur runners who took part in virtual marathon today

‘This year, sadly, it’s not possible for everyone to run together on the streets of London in the 2020 Virgin Money London Marathon,’ he said.

‘Instead, 45,000 runners from the UK and 109 countries around the world will run The 40th Race in their own way, taking on the 26.2 miles in their own communities.

He continues: ‘Thanks to all of you, the extraordinary spirit of the London Marathon will continue to shine across the globe.

‘While we won’t be together in person, we are together in spirit. And the amazing tenacity of runners from around the world is a reminder of our strength and sense of community during these difficult times. 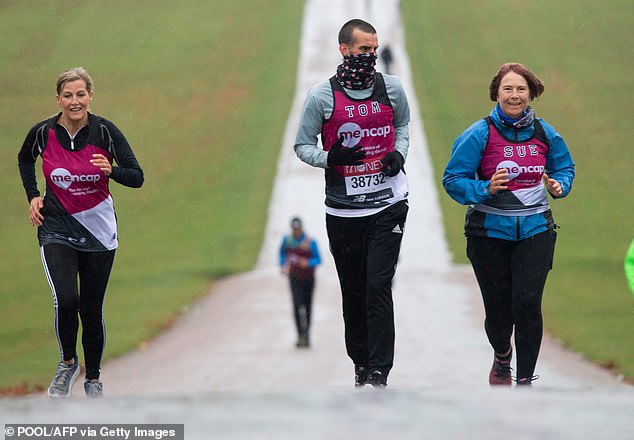 Tomas, centre, who has a learning disability himself, ran in support of the charity, of which he is a team member 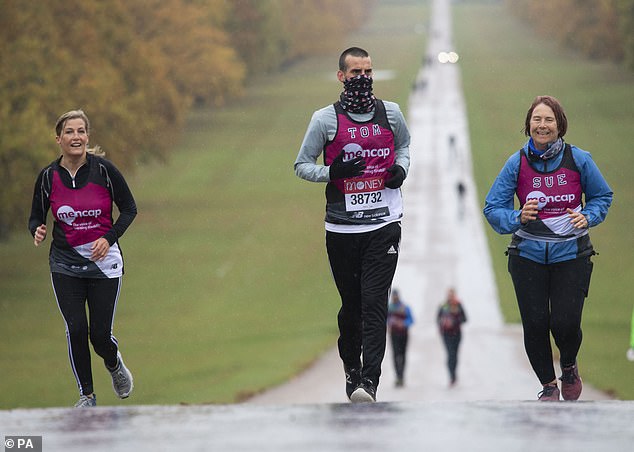 Revived! In spite of the rain, Sophie Wessex put all her heart in the race and looked more alive than ever 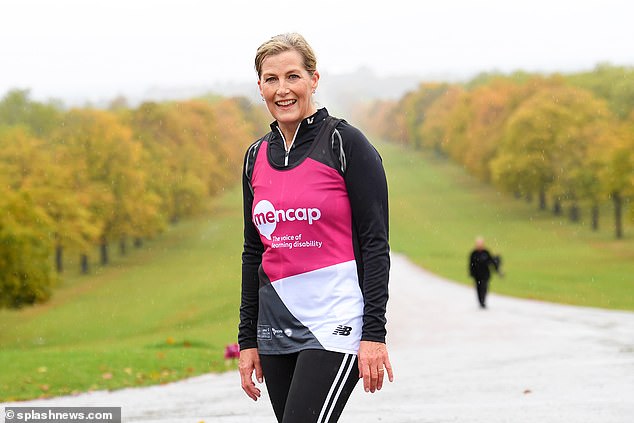 The royal wore a practical running vest and matching leggings today. She kept her blonde locks scraped back into a ponytail 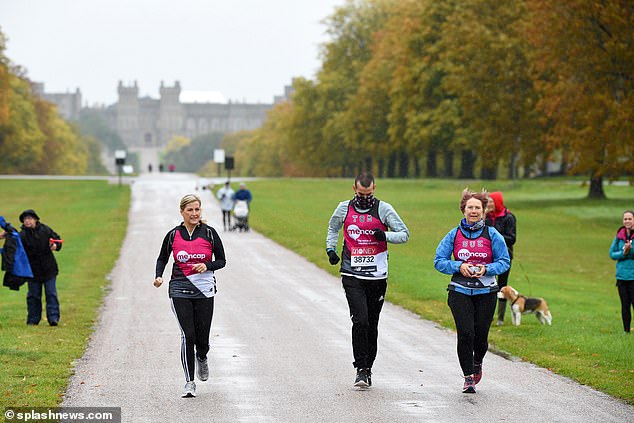 Sophie managed to keep up with the other runners during the virtual event, which took place in Windsor 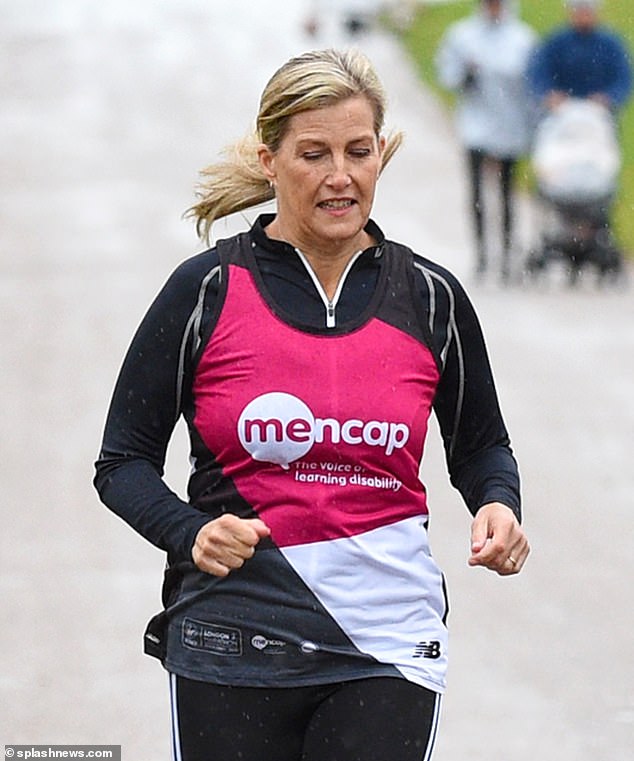 The Countess of Wessex appeared focused during the race in Windsor this morning, while wearing the Mencap vest