Roger Dubuis has showcased a host of new developments in its latest quartet of flying tourbillons, including a new tarnish-free rose gold alloy and a new technique that makes its diamonds luminescent.

The brand, which only produces watches adhering to the Poinçon de Genève quality mark, has been hard at work developing new calibres, smaller cases, reducing the weight of its tourbillons using cobalt chrome cage fronts and redefining the signature star-shaped bridges at the heart of each watch. 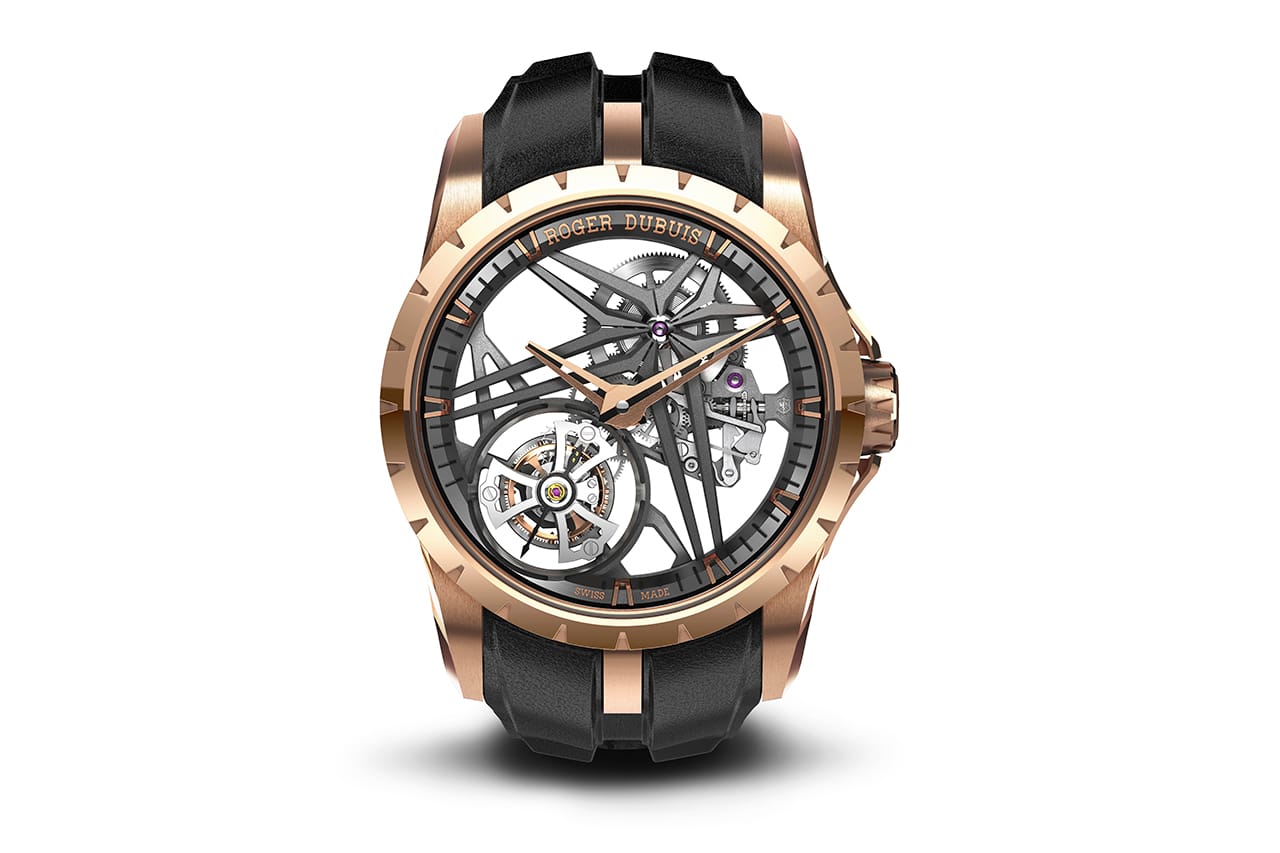 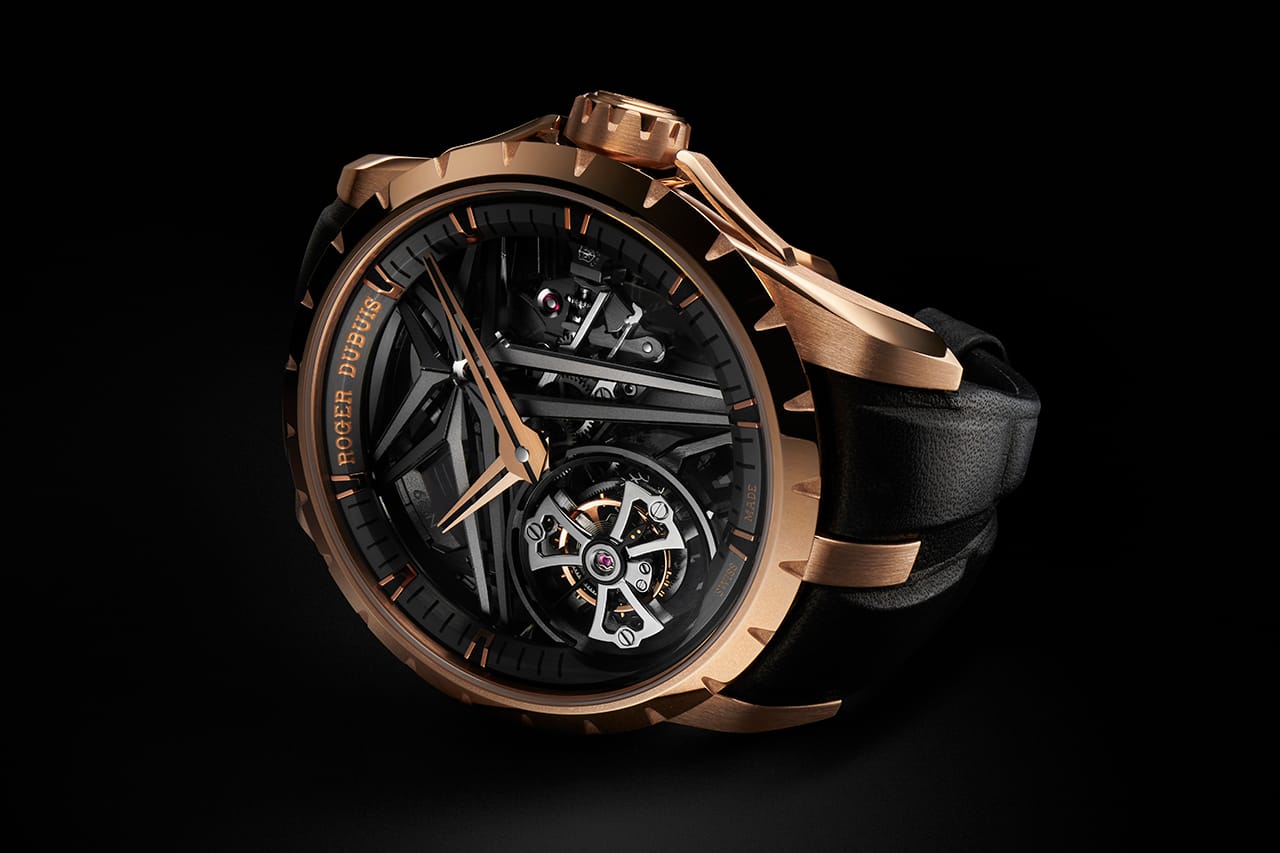 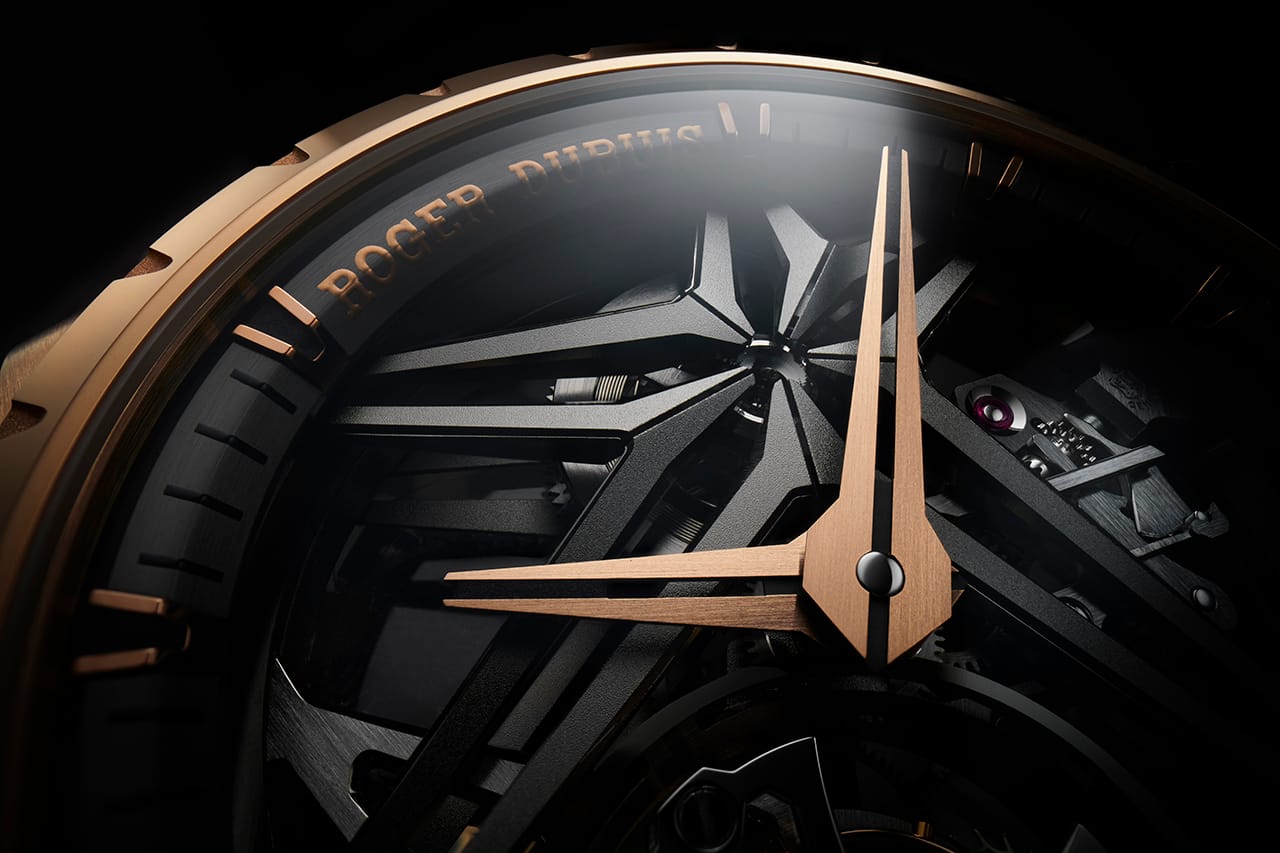 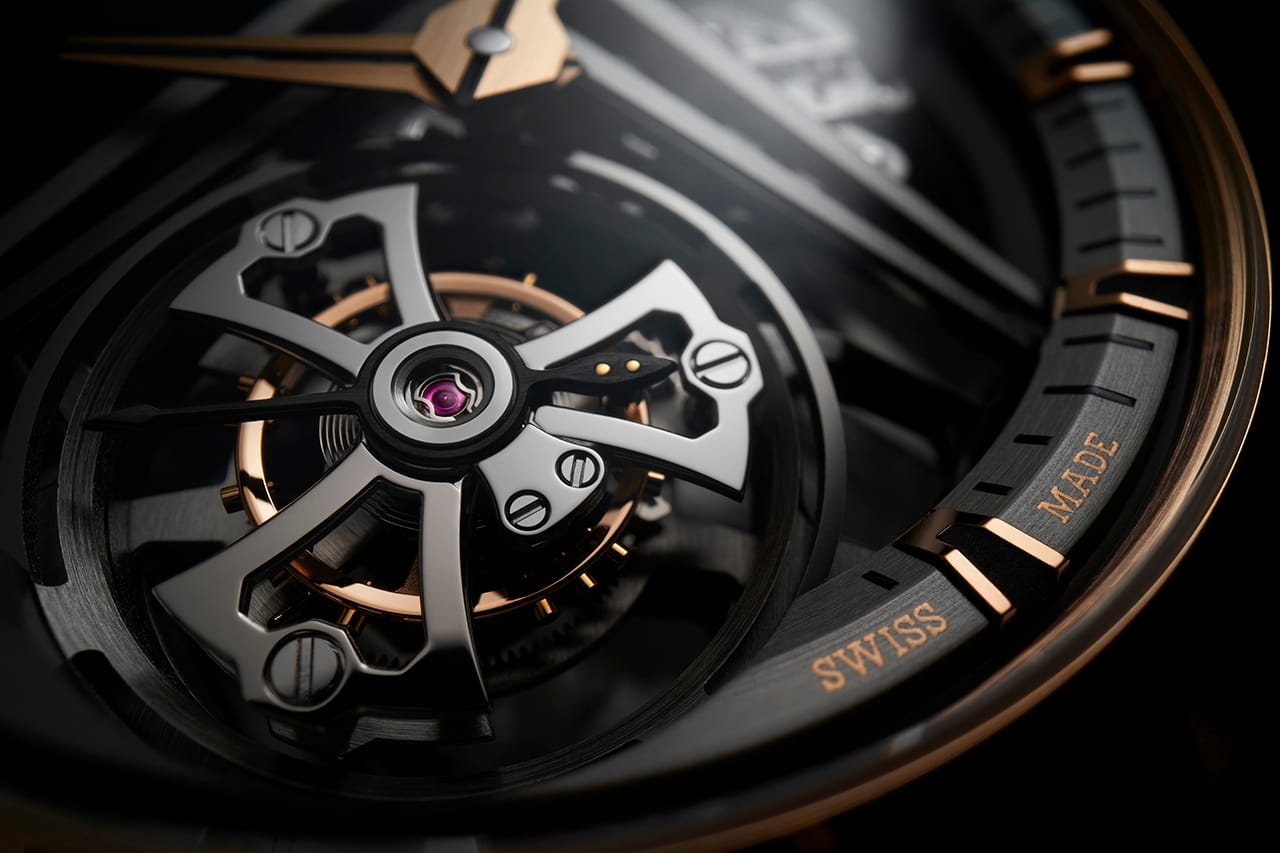 Roger Dubuis has produced a new 18k pink gold alloy called EON Gold, which solves the problem of pink gold discoloring over time, often caused by the addition of copper. EON Gold is instead ‘fixed’ through the addition of zinc and palladium and has been formulated to retain its original tone and lustre. Here it is used for the 42mm case and lugs of the flying tourbillon model. Limited to 88 pieces, RDDBEX0836 is priced £134,000 GBP ($184,300 USD).

Excalibur Glow Me Up1 of 2 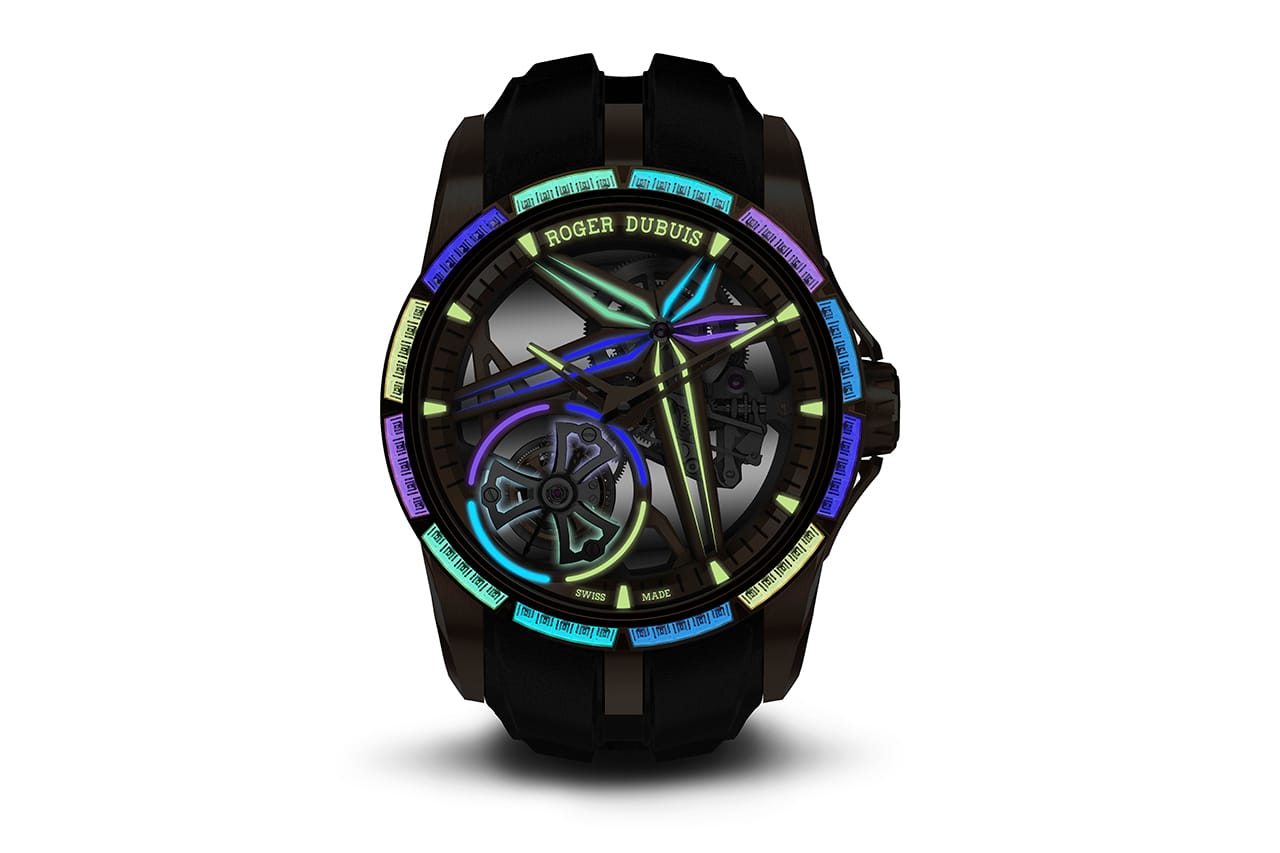 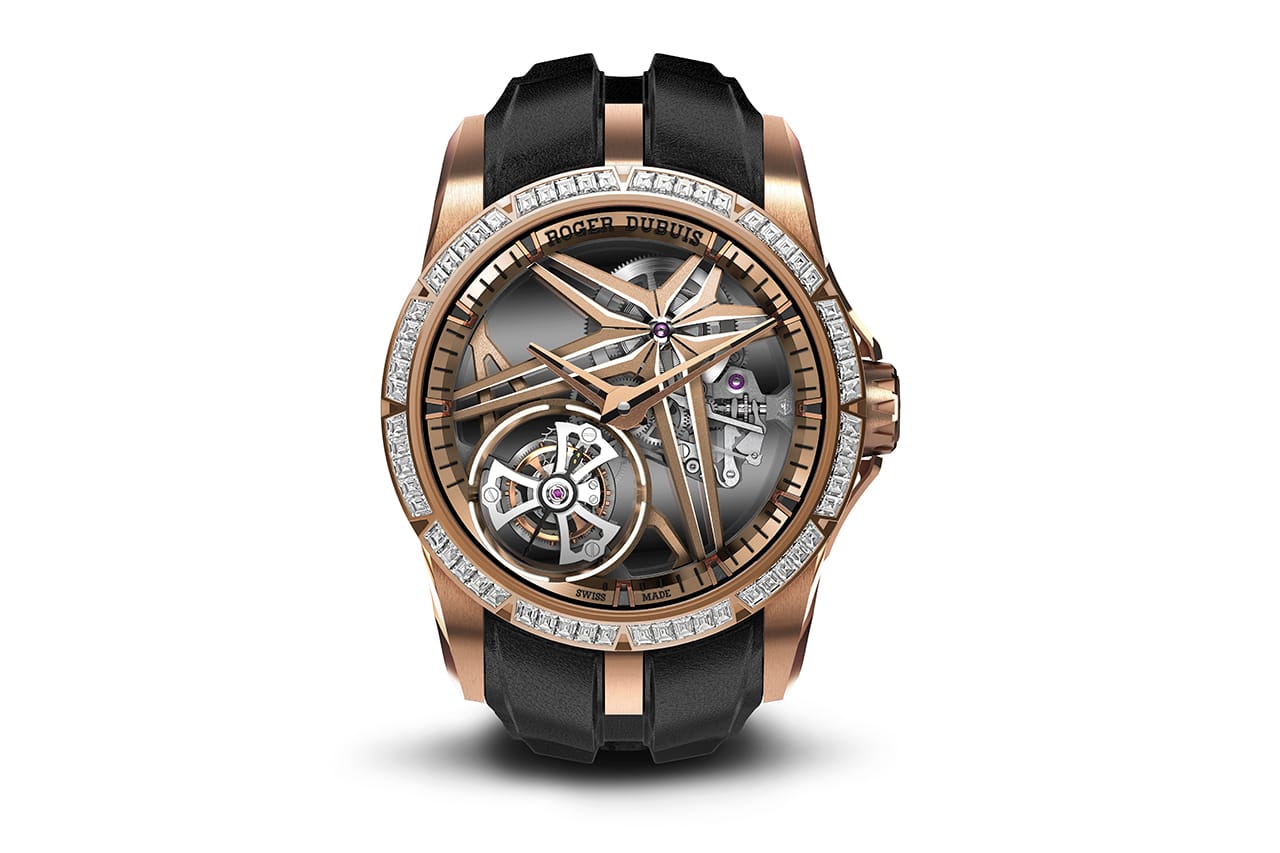 Roger Dubuis is also debuting a unique twist on the traditional gem-set watch with Glow Me Up which, as the name suggests, does indeed glow in the dark. The new technique takes advantage of the grooves cut into the reverse of gemstones to allow for invisible setting. Here those grooves are filled with Super-LumiNova meaning that in low-light conditions, each diamond is backlit by the luminous material. But the brand isn’t finished there having also applied Super-LumiNova directly to the bevels of the movement to allow it to outline the familiar star-shaped bridges at the heart of every Roger Dubuis. Limited to eight piece, the boutique exclusive Excalibur Glow Me Up! housed in a 42mm 18k EON gold case and is priced $215,000 USD. 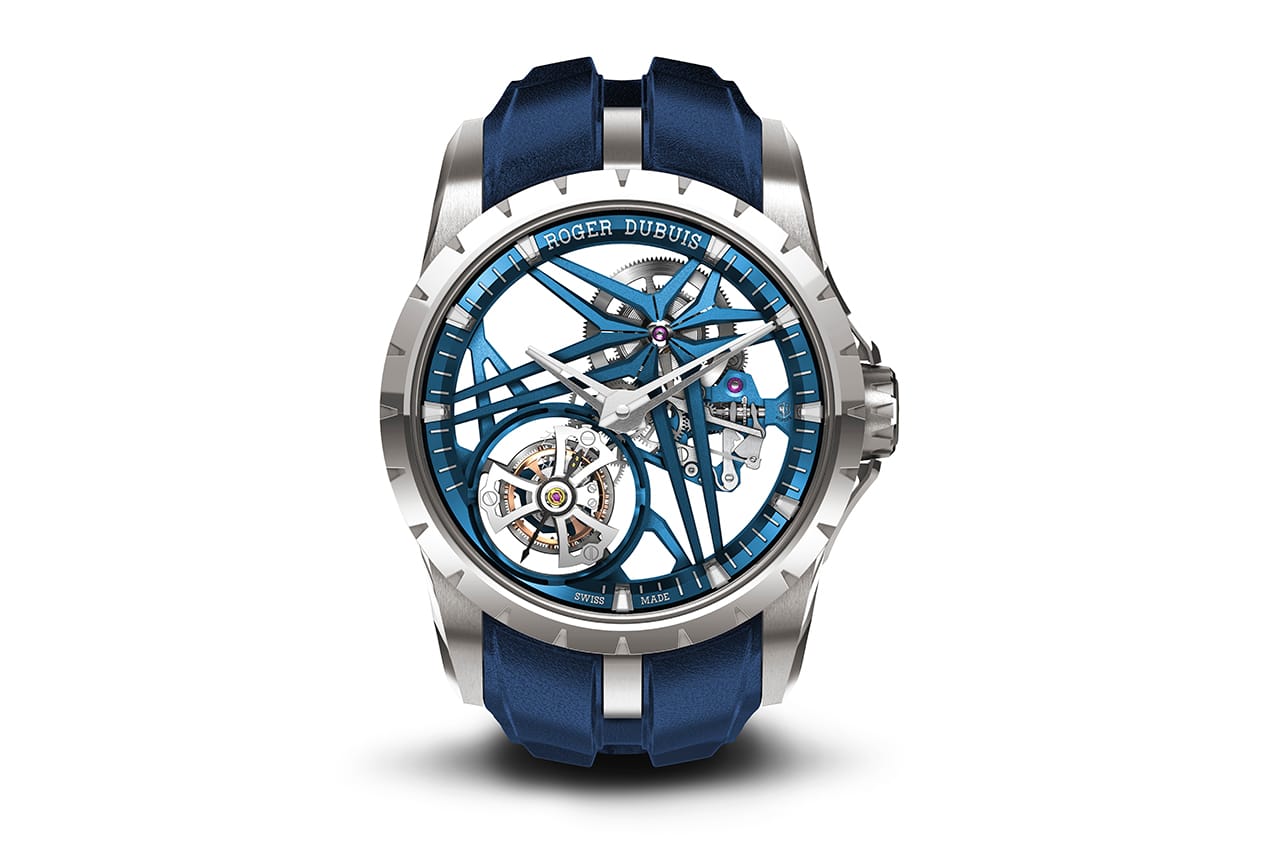 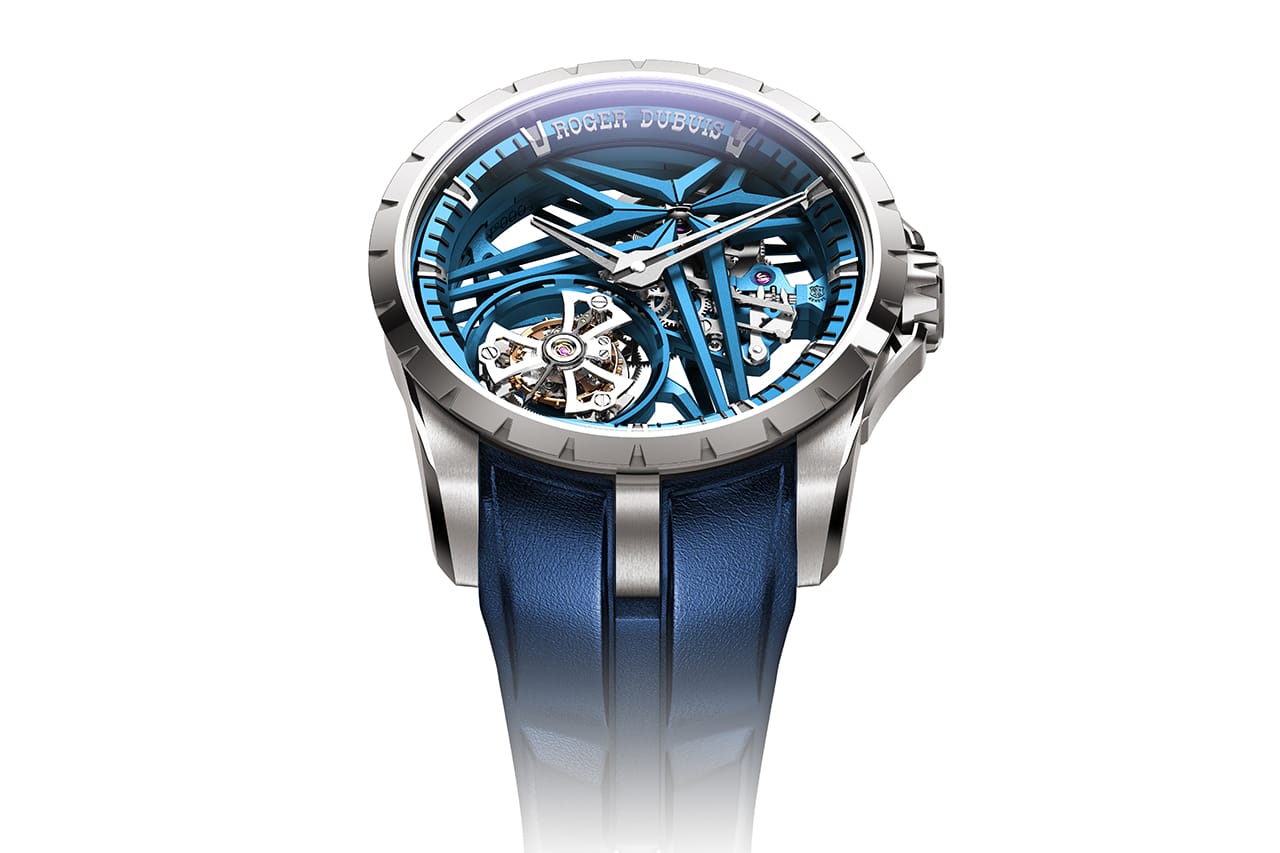 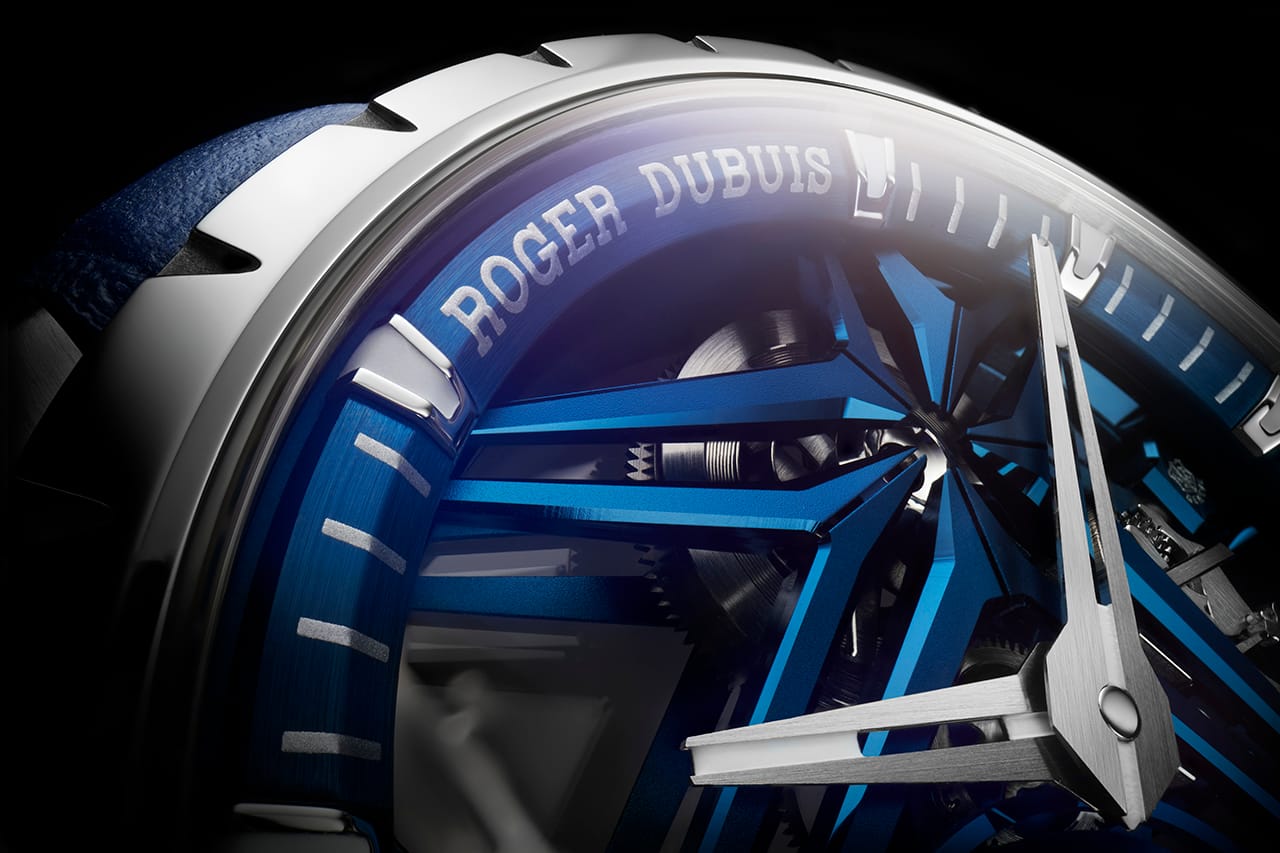 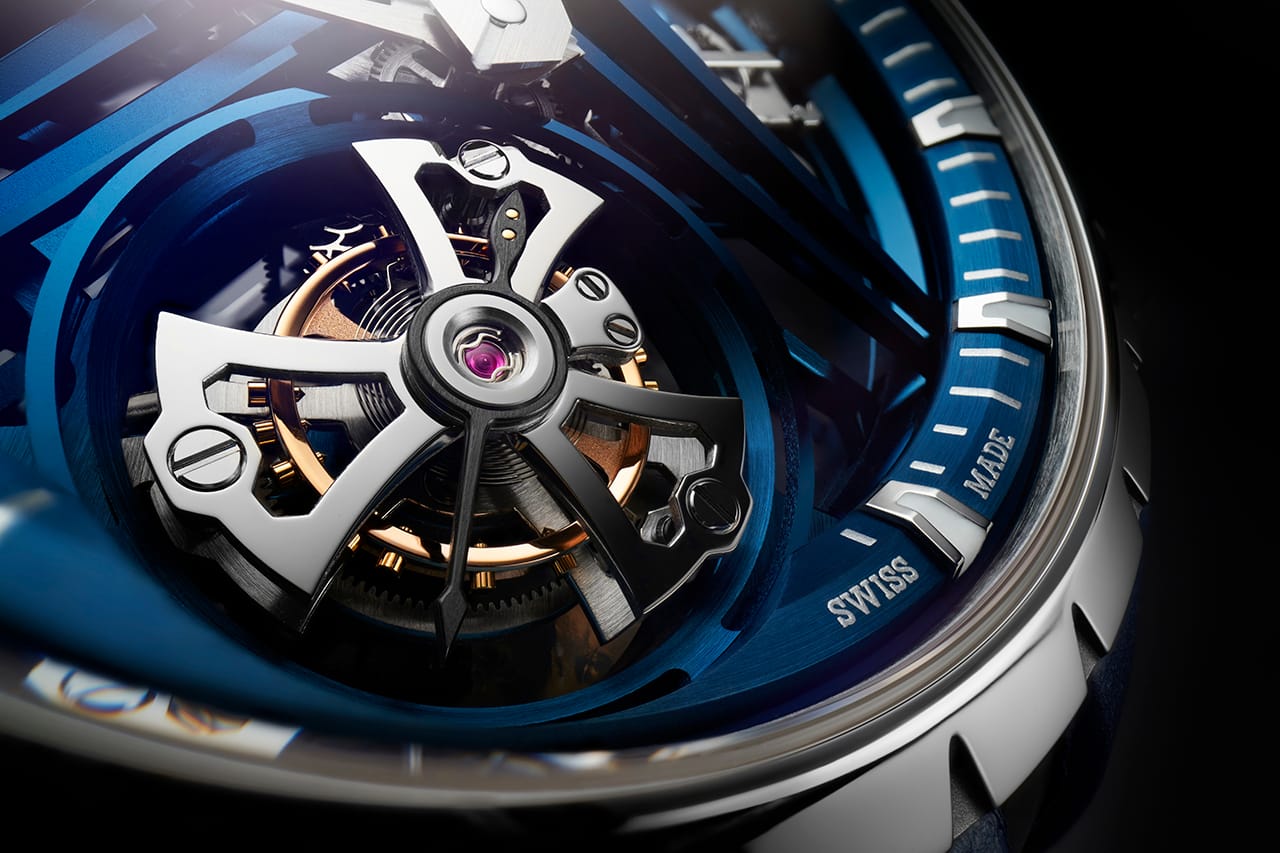 Focused on the crisp contrast between its 42mm 18k white gold case and the electric blue coating applied to its skeletonized 3Hz RD512SQ movement, the watch also features a 60-second flying tourbillo, has a 72-hour power reserve and is secured on a padded blue calfskin strap with a titanium clasp. Limited to 88 pieces, the RDDBEX0838 is priced £129,000 GBP ($177,500 USD). 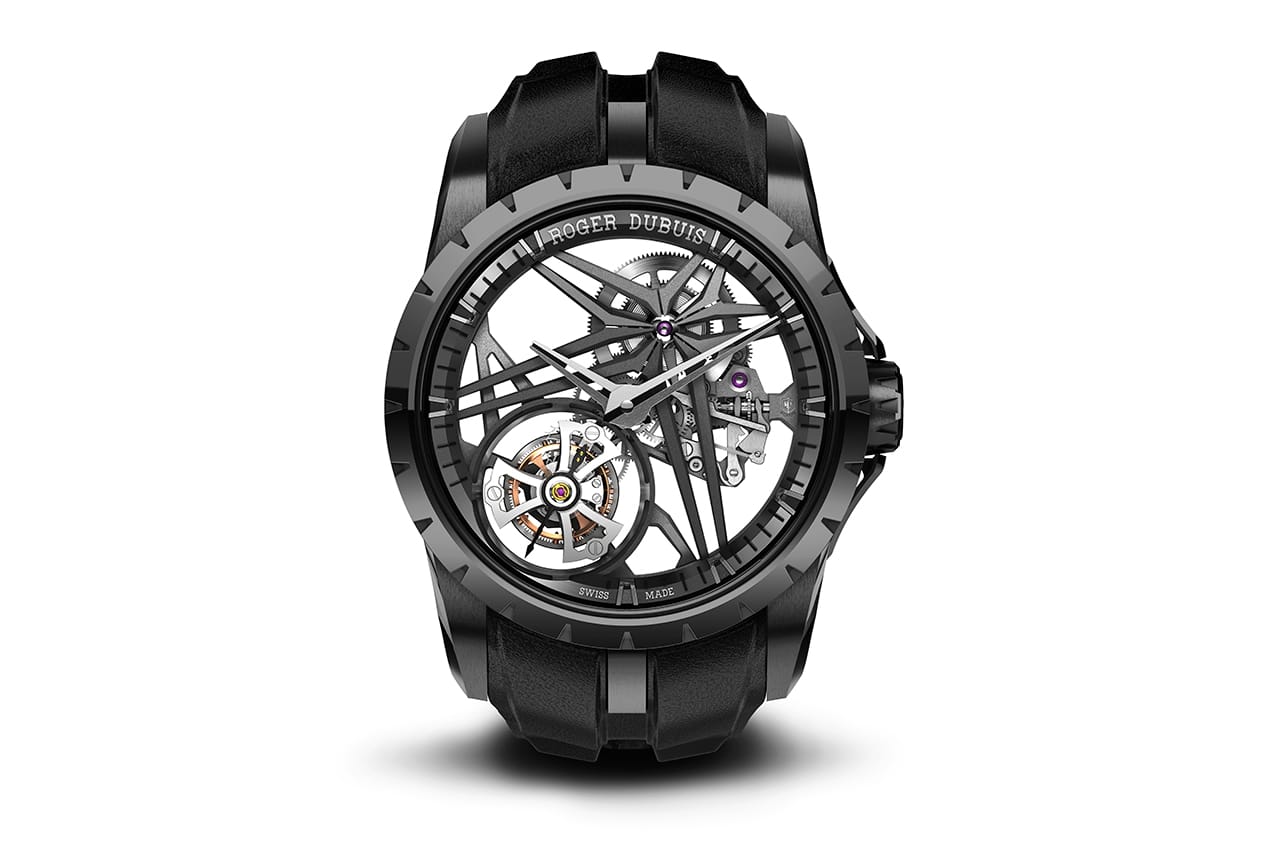 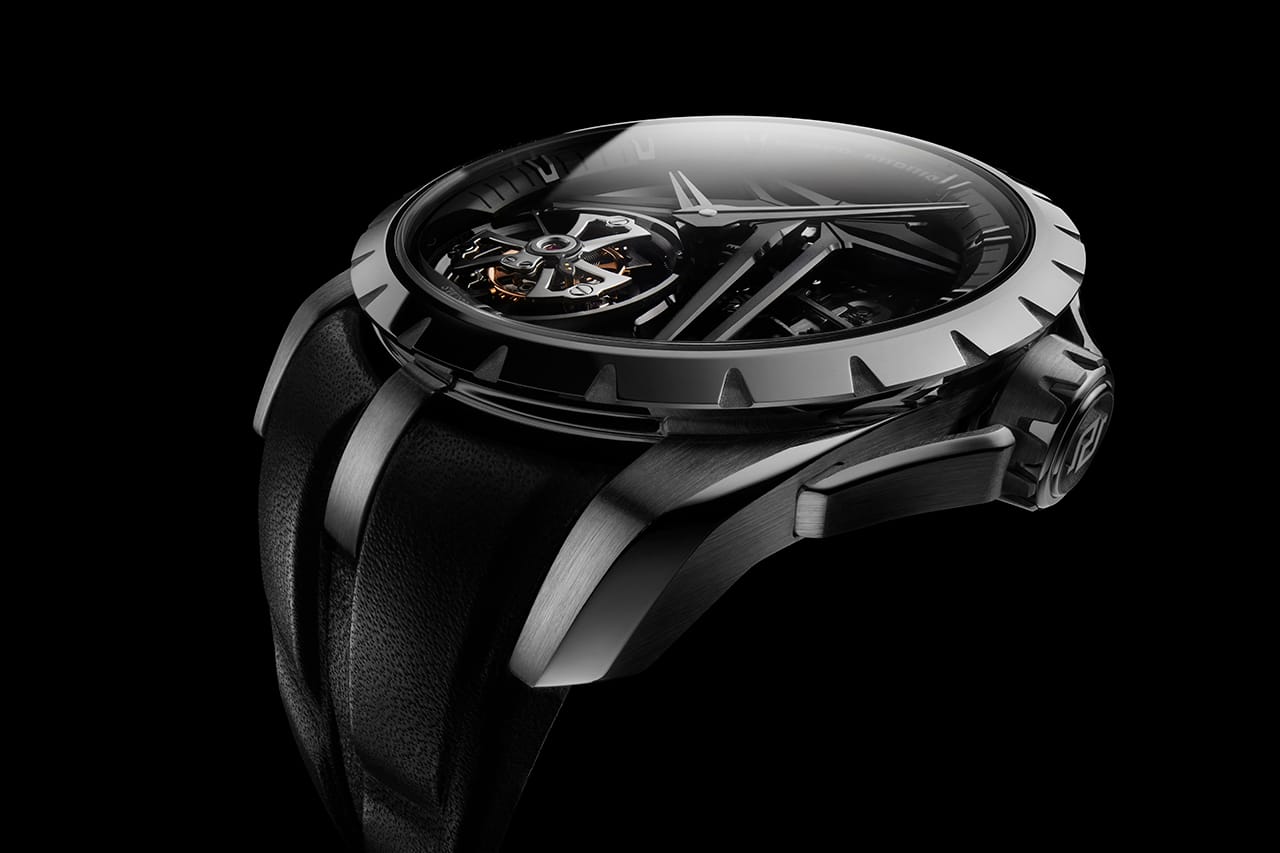 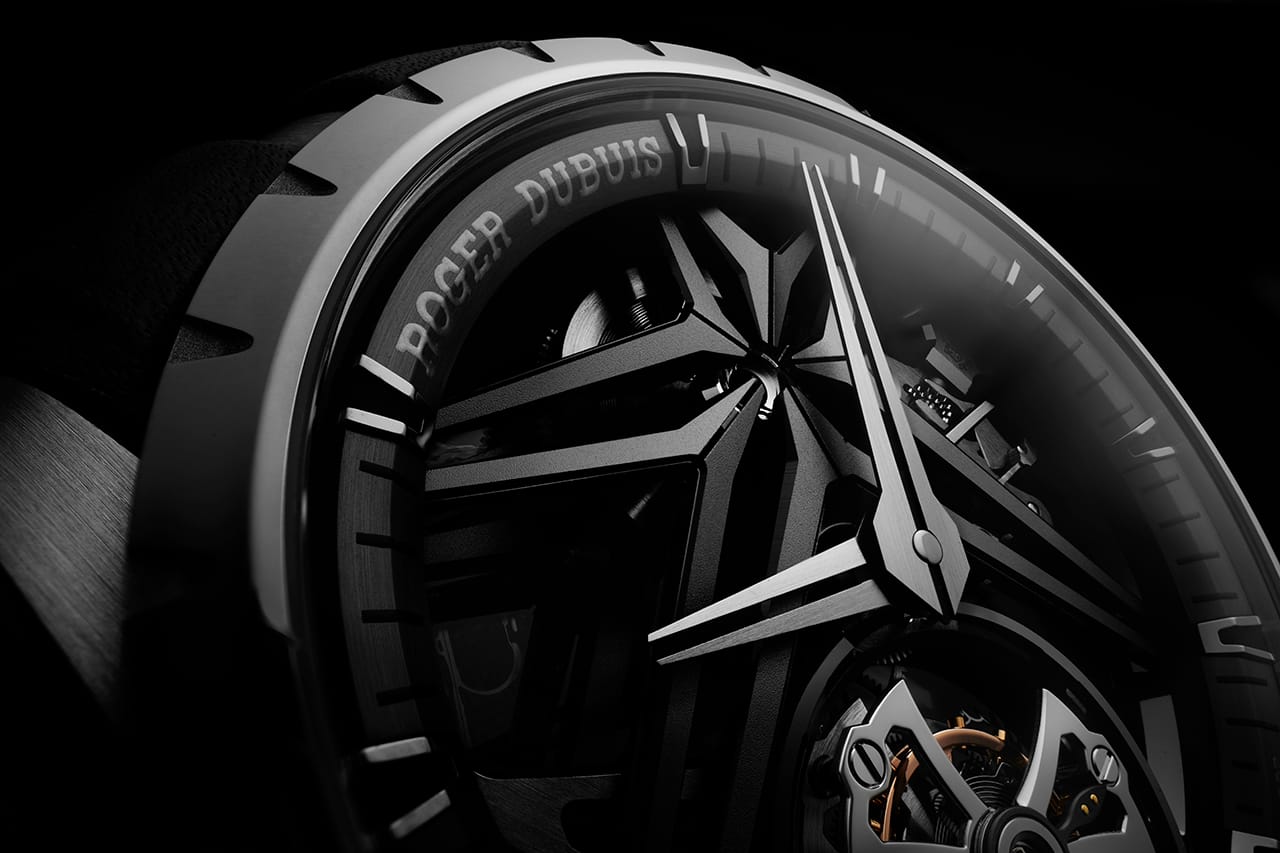 More covert in appearance, this limited edition flying tourbillon features a 42mm DLC-coated titanium case and color-matched NAC coated movement bridges with a 60-second flying tourbillon at the seven o’clock position of its RD512SQ calibre. The watch is water resistant to 100m and is secured on a quick release, padded black calfskin strap fastened by a titanium clasp. The RDDBEX0889 is also limited to 88 pieces, priced £124,000 GBP ($170,600 USD).