Is the North Atlantic right whale on the brink of extinction? Population of the endangered animal declined 10% in 2020 to 336, the lowest level for the species in nearly 20 years

The agency notes that the 2020 population figure, down from 366 in 2019, is the lowest for the endangered species in nearly 20 years.

The sharp drop is a result of poor reproduction and high mortality over the last decade, according to officials, as these whales are vulnerable to ship collisions and are known to become entangled in fishing gear.

Right whales were once abundant in the waters off New England, but were decimated during the commercial whaling era from the late 1700s through the mid-1800s, due to their high concentrations of oil.

They have been listed as endangered by the U.S. government for more than half a century and federally protected since 1972, but the majestic creatures have yet to fully recover. 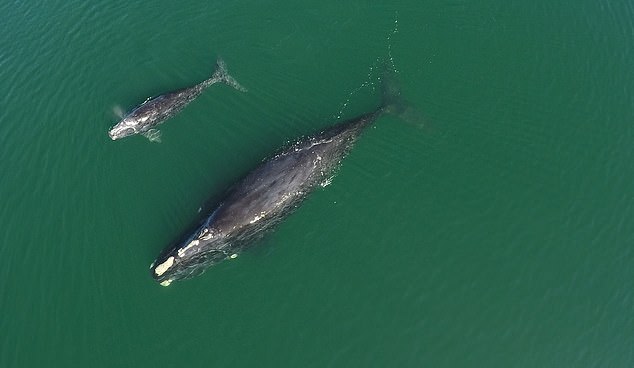 One of the rarest marine animals in the world – the North Atlantic right whale – lost 10 percent of its population in just a year, brining the total to just 336

Scott Kraus, chair of the consortium, said in a statement: ‘No one engaged in right whale work believes that the species cannot recover from this.

‘They absolutely can, if we stop killing them and allow them to allocate energy to finding food, mates and habitats that aren’t marred with deadly obstacles.’

The North Atlantic right whale is a baleen whale and is one of three right whale species belonging to the genus Eubalaena.

The whales feed and mate off New England and Canada and then travel hundreds of miles in the fall to calving grounds off Georgia and Florida before returning north in the spring. 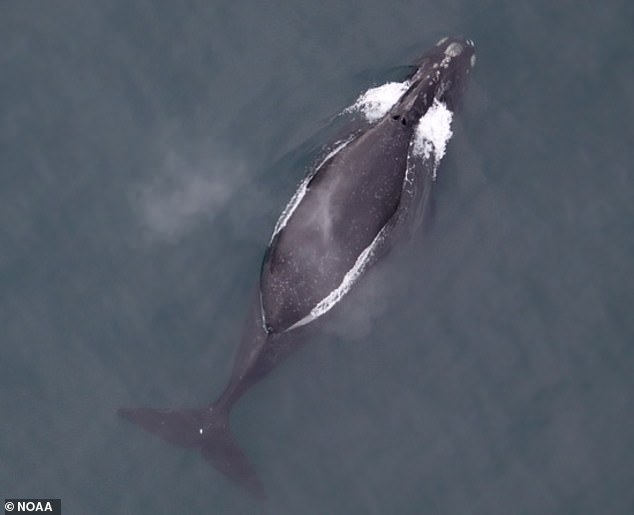 The recent decline is a result of poor reproduction and high mortality over the last decade, according to officials, along with these whales being vulnerable to ship collisions and are known to become entangled in fishing gear

The whale consortium was founded in the mid-1980s by a group of science institutions, including the New England Aquarium. It now includes dozens of members from academia, industry, government and elsewhere.

The team has since been monitoring the population, noting all the declines and rises.

The National Oceanic and Atmospheric Administration (NOAA), the arm of the federal government that monitors and regulates ocean issues, cautioned that the group’s estimate is preliminary and has not yet been peer reviewed.

However, the agency shares the consortium’s concern about the loss of right whales, said Allison Ferreira, a spokesperson for the agency, said Monday.

‘North Atlantic right whales are one of the most imperiled species on the planet, and the latest estimate shows that the substantial downward trajectory of right whale abundance documented over the last decade continues,’ Ferreira said.

The whales, which can weight 135,000 pounds have been a focus of conservationists for generations.

Recently, efforts to save the whales have resulted in new restrictions on U.S. lobster fishing, and pushback from the fishing industry about those new rules.

The rules are designed to reduce the number of rope lines that link buoys to lobster and crab traps, and went into effect this year.

However, the rules also resulted in a flurry of lawsuits, and a federal judge ruled this month that fishermen can continue to fish until further notice in an area off the coast of Maine that had been slated for restriction from their gear.

What do we know about North Atlantic right whale: Creatures that nearly hunted to extinction in the late 1700s and have yet to recover

North Atlantic right whales are a species of marine mammal which can measure up to 60 feet long (20 meters).

They tend to calve off the shores of Georgia and Florida in the Atlantic Ocean before migrating further north.

Numbers have plummeted in recent years due to premature deaths as a result of getting trapped in fishing lines and unfortunate encounters with ships.

A principle food source for the whales is phytoplankton.

This phytoplankton has been damaged in recent times as global warming has increased the water temperature of the Gulf of Maine.

It is currently critically endangered and there are believed to be only 365 animals in the world.,

Of these, only 70 are reproductive age females, and at the current rate they are being killed (10 last year) the species could be functionally extinct in 20 years.

The animals has a gestation period of over a year and the calves rely on their mother for food for a further 9-12 months.