A dog lover has revealed how her beloved rescue pet saved her life by alerting her to be checked out for breast cancer by repeatedly sniffing her arms.

Joanne Lowen, a 60-year-old retired school teacher from Kent, explained she has her rescue dog Menios to thank for her early cancer diagnosis after she welcomed the starved and wounded pet into her home.

Menios, a Hellenic hound, is likely to have been tortured, beaten and left for dead by his previous owners. He was found in terrible shape in his native country, starved and weighing just 8lbs, exhausted, with broken ribs and dislocated kneecaps, and Joanne decided to take him.

Speaking to Femail, Joanne, who already had adopted two other pups from Greece, recounted how Menios’ repeated sniffs at her arms alarmed her enough to visit the GP, which led to an early cancer diagnosis. 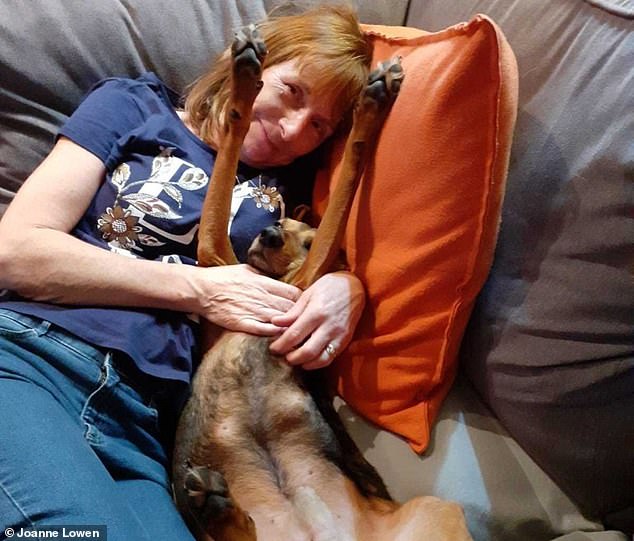 Joanne Lowen, a 60-year-old retired school teacher from Kent, explained she had her rescue dog Menios to thank for her early cancer diagnosis after she welcomed the starved and wounded pup in her Lower Halstow’s home in Kent (pictured) 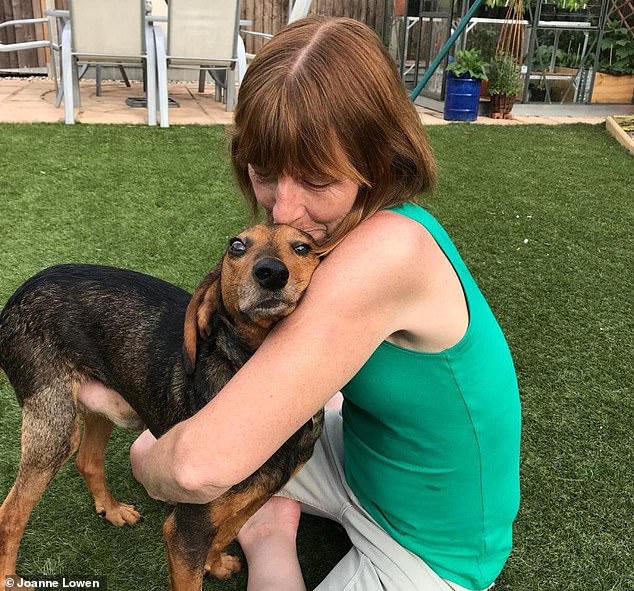 The mother-of-three had had a mammogram that came back clear in September, only a few months before her family welcomed Menios on 23 December 2018.

However, when Menios would not stop sniffing her, she decided to visit the GP due to her history of breast cancer, which she’d had twenty years ago.

‘I’ve had heard of dog sniffing illnesses, and being the “crazy dog lady” that I am, I decide to have it checked out,’ she said.

‘If it hadn’t been for him, I would have waited until my next mammogram two to three years from now, which is a long time,’ she said.

She said she told her GP she could feel a lump herself, rather than admitting she came because her dog was sniffing her. 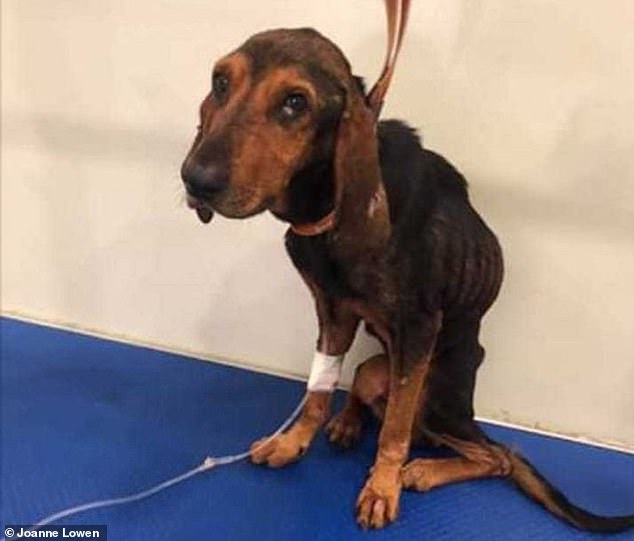 The doctor’s physical exam didn’t lead anywhere, but due to Joanne’s cancer history, he ordered some further exams at Medway Hospital in Gillingham, Kent, to make sure.

The results showed that Joanne suffered from Invasive lobular carcinoma, a type of cancer that begins in the milk-producing glands (lobules) of the breasts.

Thankfully, it was still in its early stages.

‘I got home and I gave him a big hug,’ Joanne said.

She went on to get treated for the cancer, having an operation in June 2019 in order to get rid of the tumour at KIMS Hospital in Maidstone. Results showed the cancer had not spread to her lymph notes. 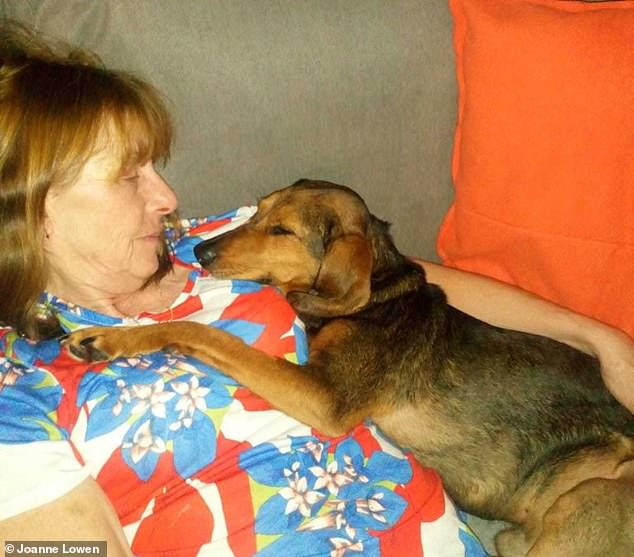 Joanne said she had an instant bond with the animal, and decided to foster him to good health right after seeing pictures of him 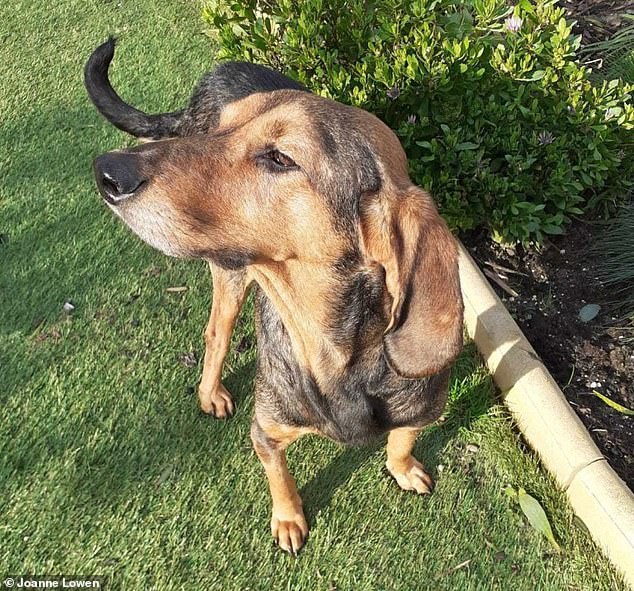 Menios is now doing much better with Joanne, and is undergoing dog hydro-therapy in order to regain some strength

However, it took ten days before the pensioner could know for sure whether she had clear margins – meaning no cancer cells had survived on the breast or travelled elsewhere. During that time, Menios kept sniffing her, which stressed Joanne.

HOW DO DOGS ‘SNIFF OUT CANCER’?

Dogs have an extremely sensitive sense of smell and can pick up on ‘volatile organic compounds’, which are released from the early stages of many cancers, including ovarian, lung and colorectal.

Scientific studies have shown pooches can separate between blood and tissue samples donated from ovarian cancer patients and healthy people by picking up on minute quantities of VOCs.

Studies have also shown dogs can sniff out prostate cancer in a man’s urine, as well as breast and lung forms of the disease from compounds in a patient’s breath.

If a dog detects this on their owner, they may try to alert them by paying them more attention, sniffing them, or ‘comforting’ them by gently licking their hands or feet, or laying beside them for no reason.

If a person notices their dog is regularly acting differently around them, it may be worth looking out for other cancer symptoms, such as pain, fatigue and weight loss.

Experts have said specially-trained dogs could particularly help women with ovarian cancer, which has no screening programme and is usually only diagnosed when advanced.

‘I told my husband “he’s scaring me,” she said, before adding her husband simply told her Menios could be sniffing her surgery wound rather than cancer.

Eventually, Joanne was given clear margin, and had to undergo radiotherapy to make sure no cancer was left behind.

The mother-of-three, who joked she was a ‘failed fosterer,’ initially heard about him from the Healing Paws Animal Rescue Zankinthinos.

The charity arranges transport by ferry and overland with volunteer drivers, and Joanne initially took on Menios as a foster pet, but decided to keep him after all they went through.

She said that after he detected her cancer, she told herself there was ‘no way he’s going anywhere,’ but added that their bond was so strong that she would have kept him regardless.

Speaking to Metro, Joanne explained that a vet in Greece had said Menios needed to built some muscle mass, but months on, he was still weak.

‘His back legs were really weak. He had lots of scars on him and it looked like his ribs had been broken at some point, because they were a bit distorted looking.’

Medics suggested the pup had been beaten or tortured, because both his hind legs were broken.

Joanne added: ‘The vets said he must have been in excruciating pain. His legs were very weak, kept falling over, he had no muscles there. Every time he moved his knees were popping out.’

Menios, who live with Joanne and her two other rescues Hector and Spiros, is undergoing dog-hydrotherapy in order to gain strength under the loving care of his new owner. 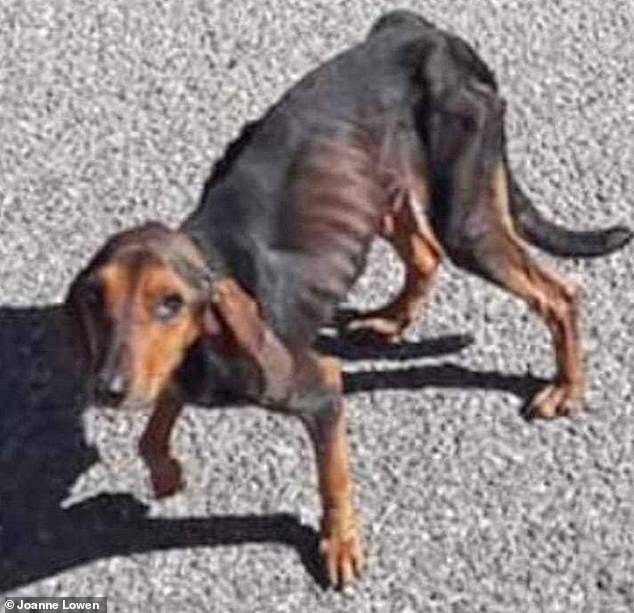 The mother-of-three said the rescue pup, who was found in terrible shape, saved her life by detecting the tumour as early as he did (pictured before his adoption) 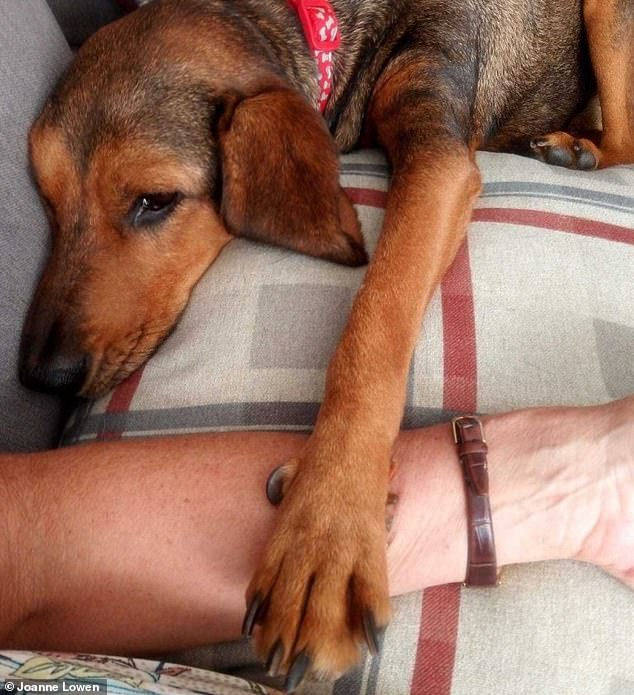