The Duke and Duchess of Cambridge, both 39, are set to host the awards this afternoon  – the first of the ceremony of the most ambitious environmental prize in history.

Salah, 29,  looked suave in a dapper black tuxedo, while Olympic rower Sir Matthew Clive Pinsent, 51, was joined by is glamorous wife Demetra, the CEO of cosmetic giant Charlotte Tilbury who is said to have helped Kate Middleton overhaul her image following the birth of Princess Charlotte.

Elsewhere, Emma Thompson, 62, sported a navy suit for the green carpet. The British actress showed off her effortless style in the double breasted jacket.

Keeping her white blonde hair in a stylish chip, the national treasure beamed walking into the event.

She paired her blue suit with a glamorous make-up look, with a light layer of foundation and statement pink lip. 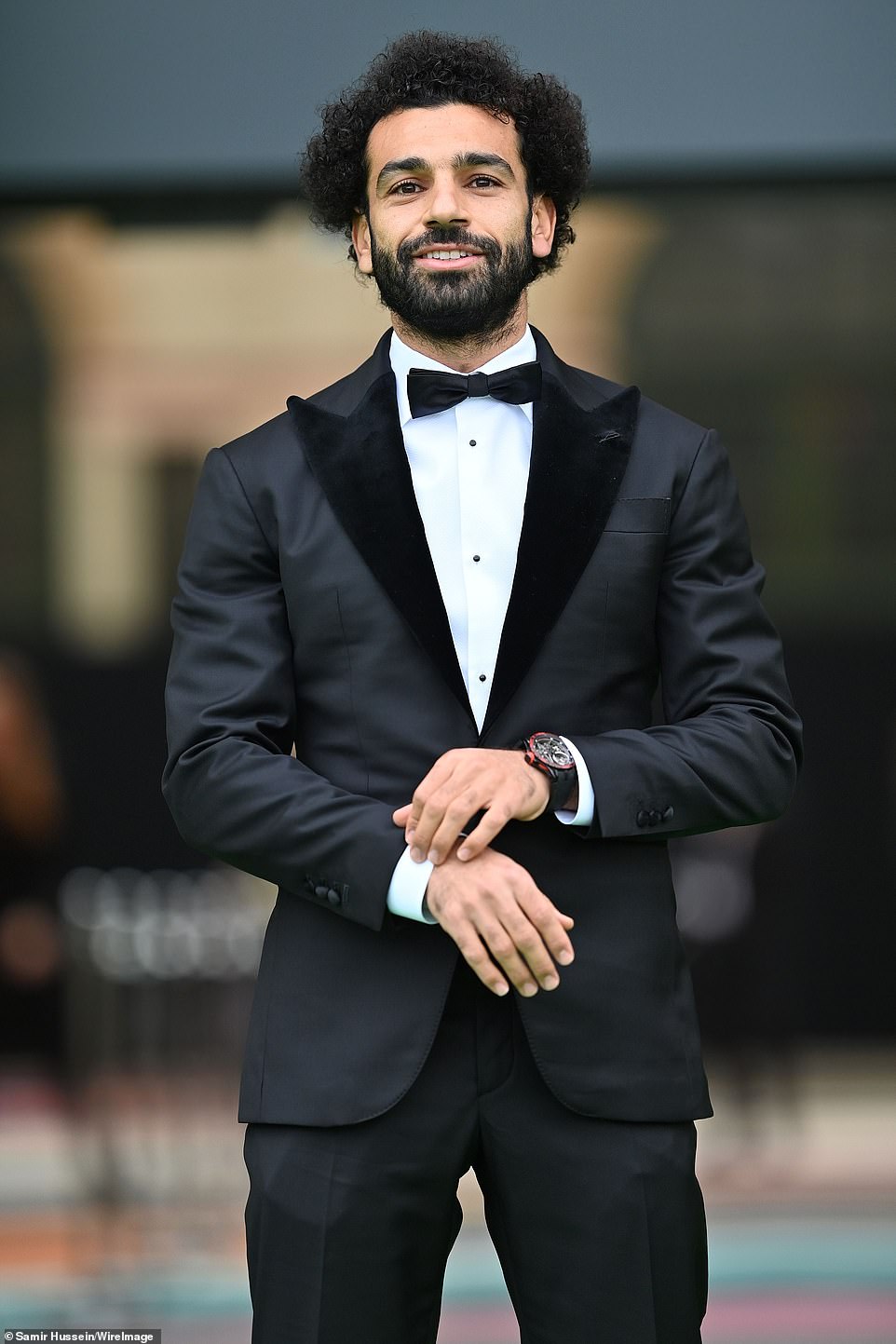 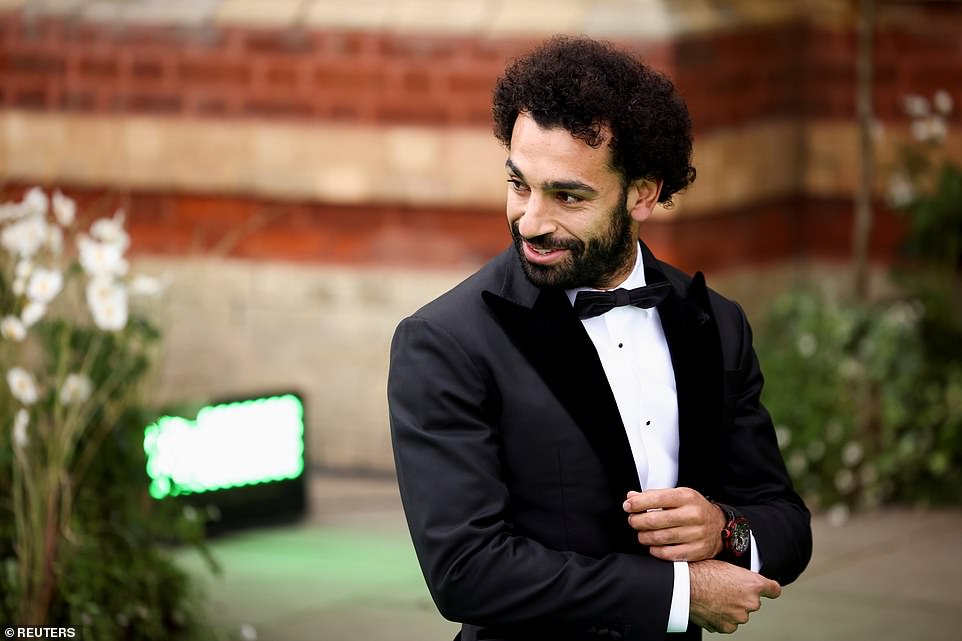 Salah, 29, looked suave in a dapper black tuxedo, as he lead the glamour on the green carpet tonight 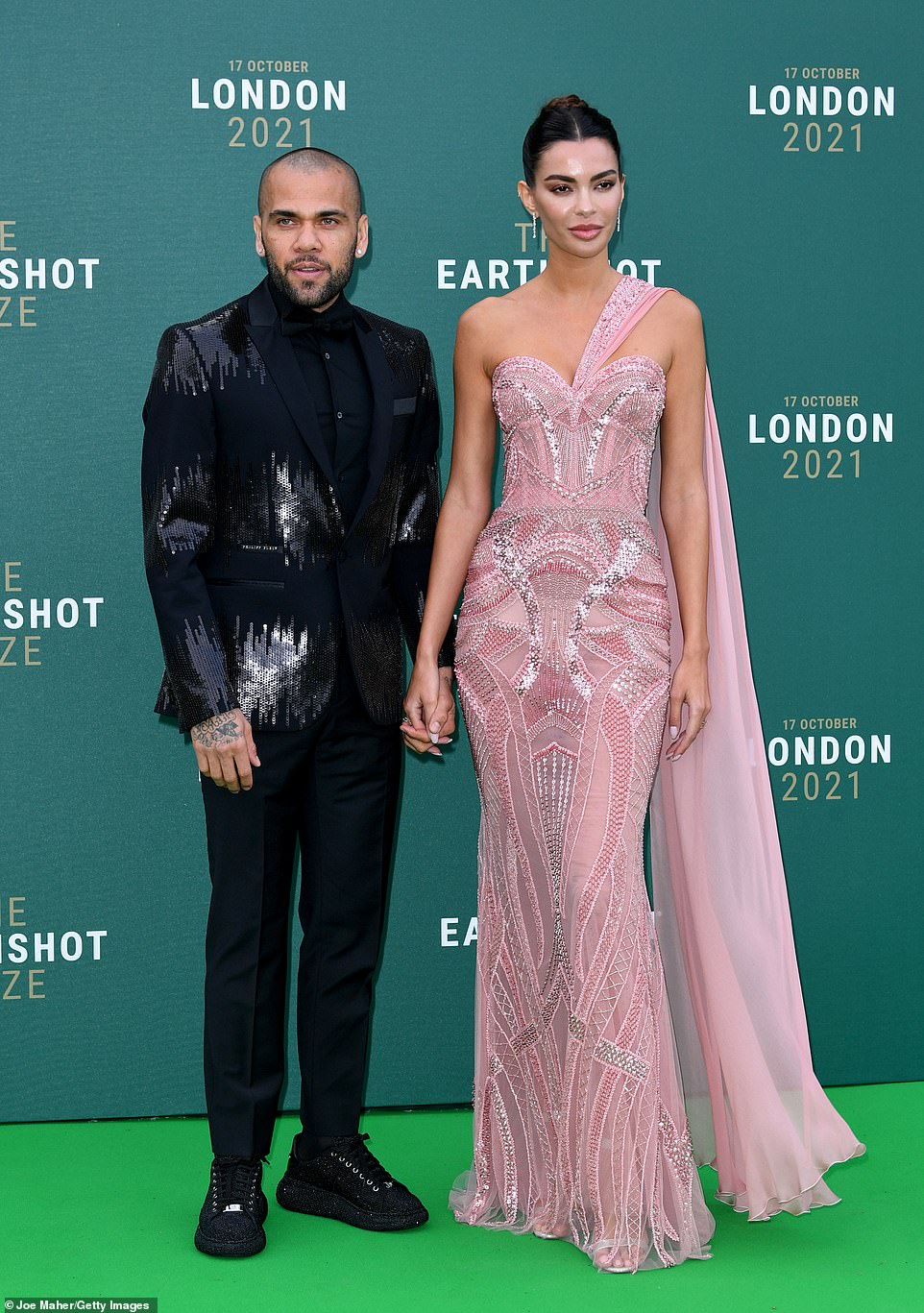 Footballer Dani Alves and his supermodel wife Joana Sanz stunned on the green carpet. Joana, 28, stunned in a floor-length pink number while Brazilian right back Dani showed off his flair for style in a black sequin jacket and sparkling trainers 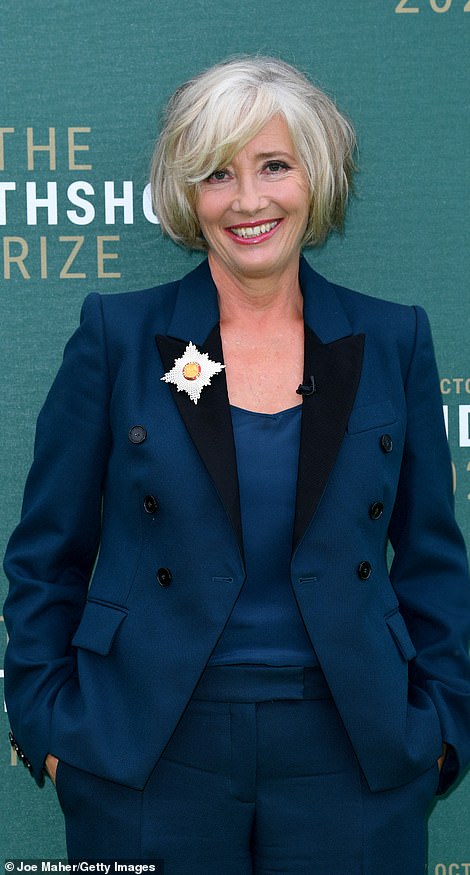 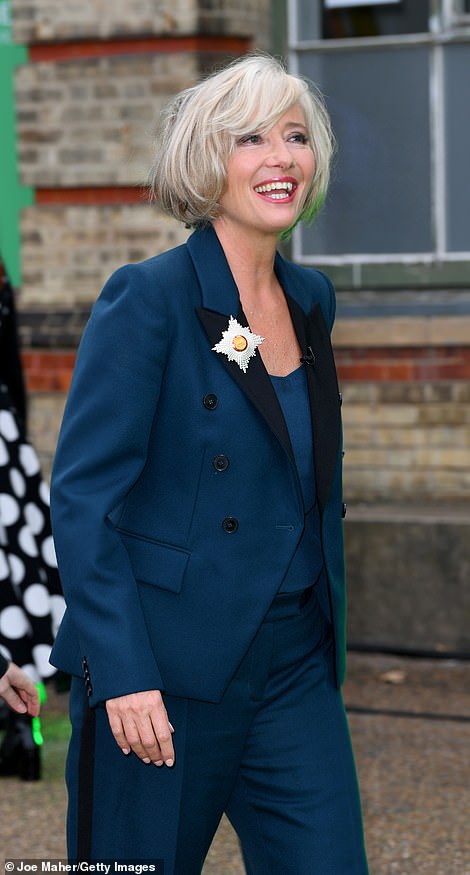 Beautiful in blue! Emma Thompson, 62, sported a navy suit for the green carpet. The British actress showed off her effortless style in the double breasted jacket

Tonight is the first ceremony in Duke of Cambridge’s decade-long global environmental competition  with a set of A-list judges set to join the show which will see winners handed £1million for an idea to protect the planet.

Sir David Attenborough, who has supported the project from the beginning, is a member of the Earthshot Prize council, which will choose the winners.

William and David Attenborough will also present a new BBC show about the environment featuring pioneers who have been recognised for finding innovative solutions to the most pressing climate issues.

An exciting and star-studded group of internationally recognised performers, presenters and Earthshot Prize guests will be joining William and Kate.

These global stars will arrived via a green carpet, before taking their seats in Alexandra Palace’s stunning East Court Theatre for the ceremony, which will be broadcast this evening at 8pm on BBC1. 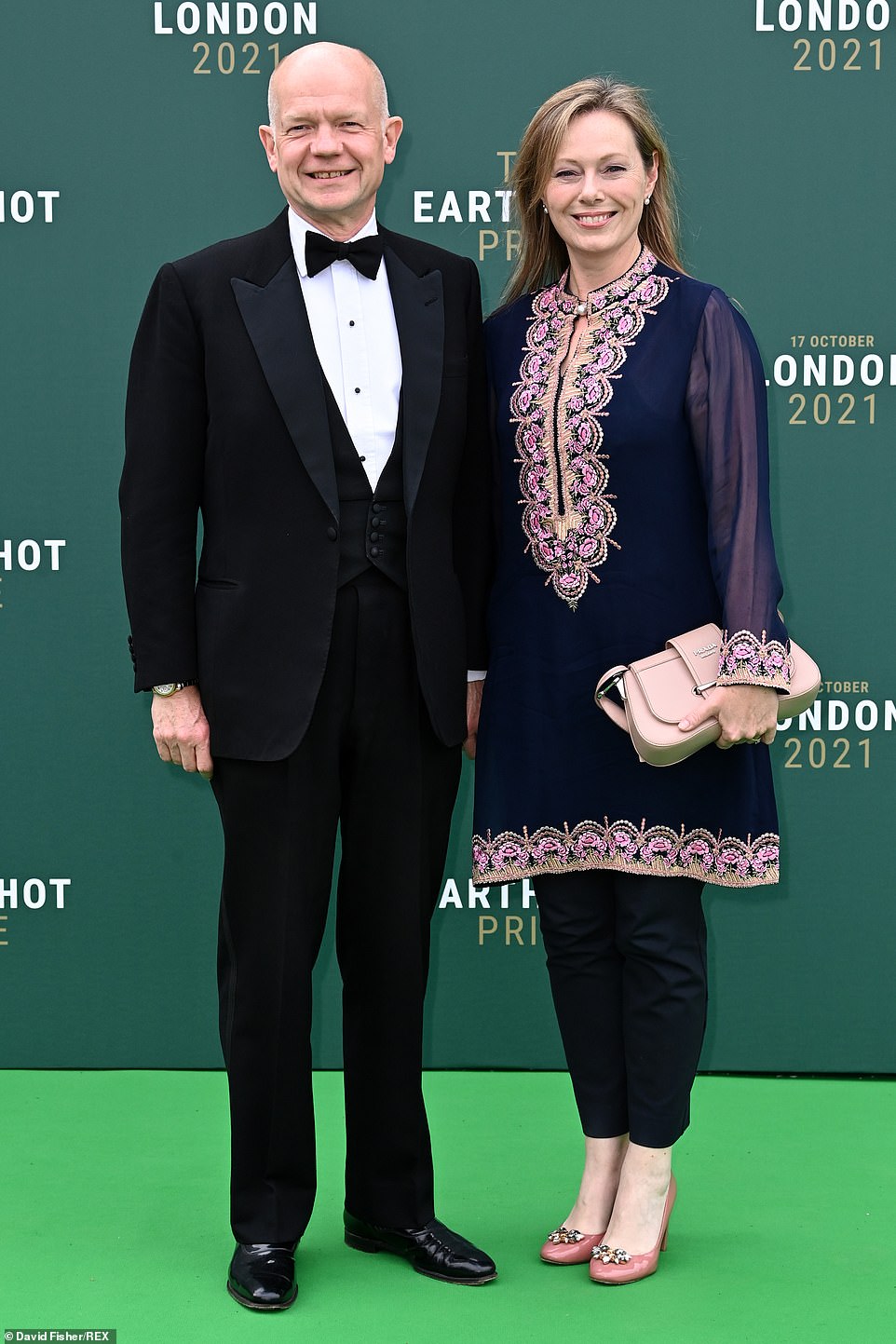 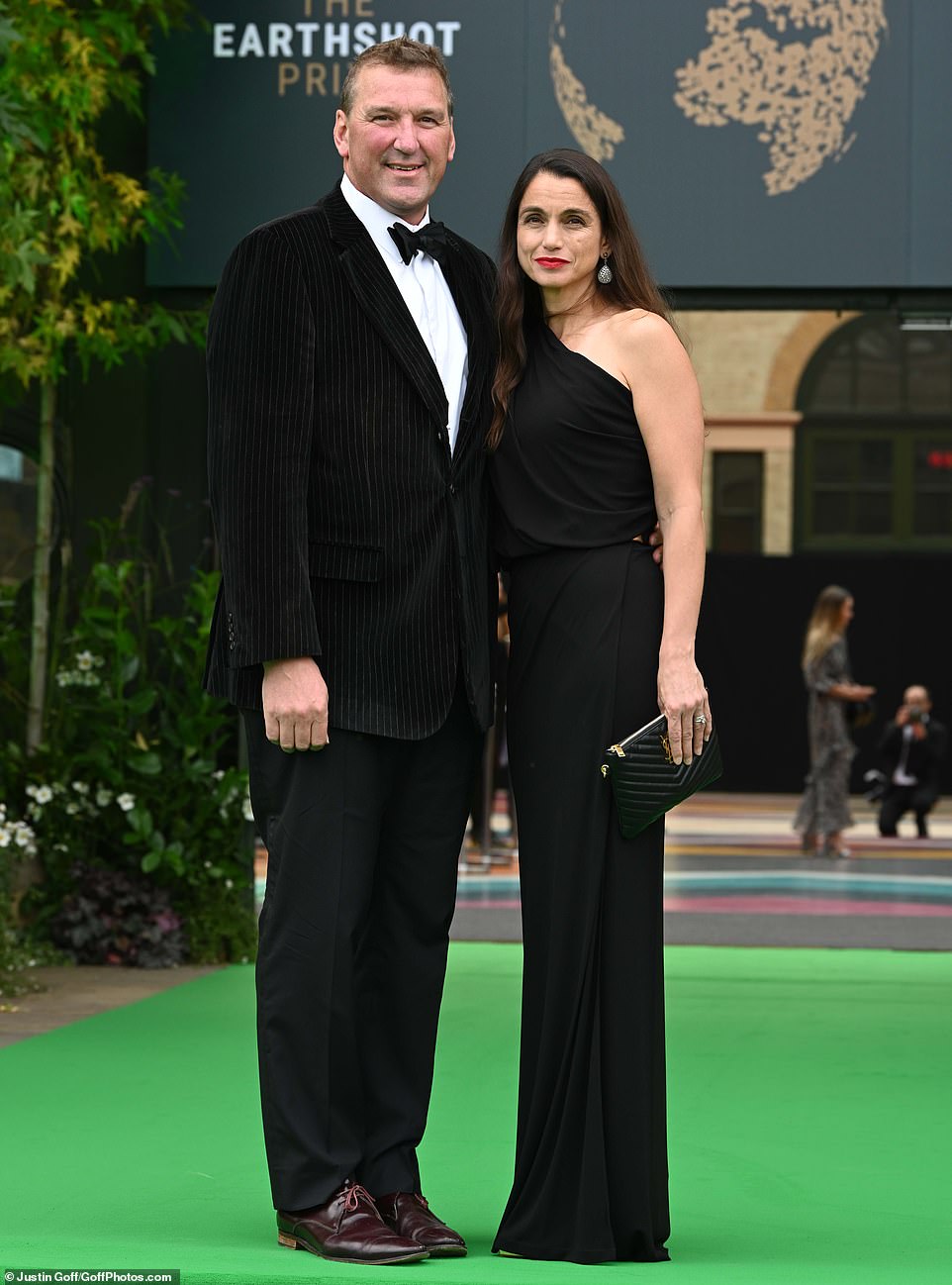 Olympic rower Sir Matthew Clive Pinsent was joined by is glamorous wife Demetra, the CEO of cosmetic giant Charlotte Tilbury who is said to have helped Kate Middleton overhaul her image following the birth of Princess Charlotte. 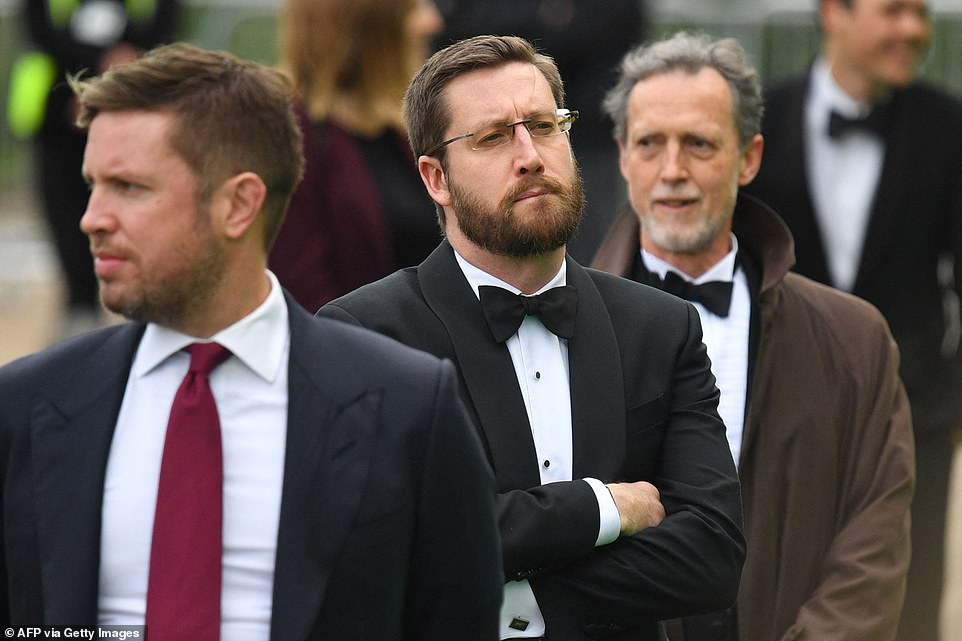 The event will be a celebration of the natural world, focussed on turning the current pessimism surrounding environmental issues into optimism by celebrating the people and places driving change – the first-ever Earthshot Prize Finalists and Winners.

The stars of the show will be the five inaugural winners of The Earthshot Prize who will be announced during the ceremony, which will celebrate the ingenuity of all 15 Earthshot Prize Finalists and their extraordinary work to tackle the challenges posed by climate change and the threats to our oceans, air, and land.

Launched by Prince William and The Royal Foundation in October 2020, The Earthshot Prize has been inspired by President John F. Kennedy’s ‘Moonshot’ programme in the 1960’s, which united millions of people around the goal of reaching the moon.

The Earthshot Prize aims to incentivise change and inspire collective action around our unique ability to innovate, problem solve and ultimately repair our planet over the next ten years.

The Earthshot Prize is based on five ‘Earthshot’ goals: Protect and restore nature; Fix our climate; Clean our air; Revive our oceans; Build a waste free world. Five £1 million prizes will be awarded each year for the next 10 years, providing at least 50 solutions to the world’s greatest environmental problems by 2030. 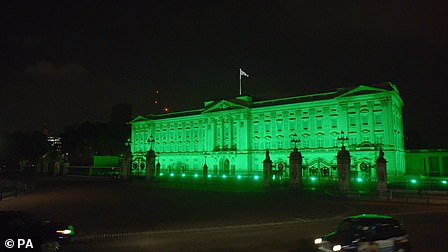