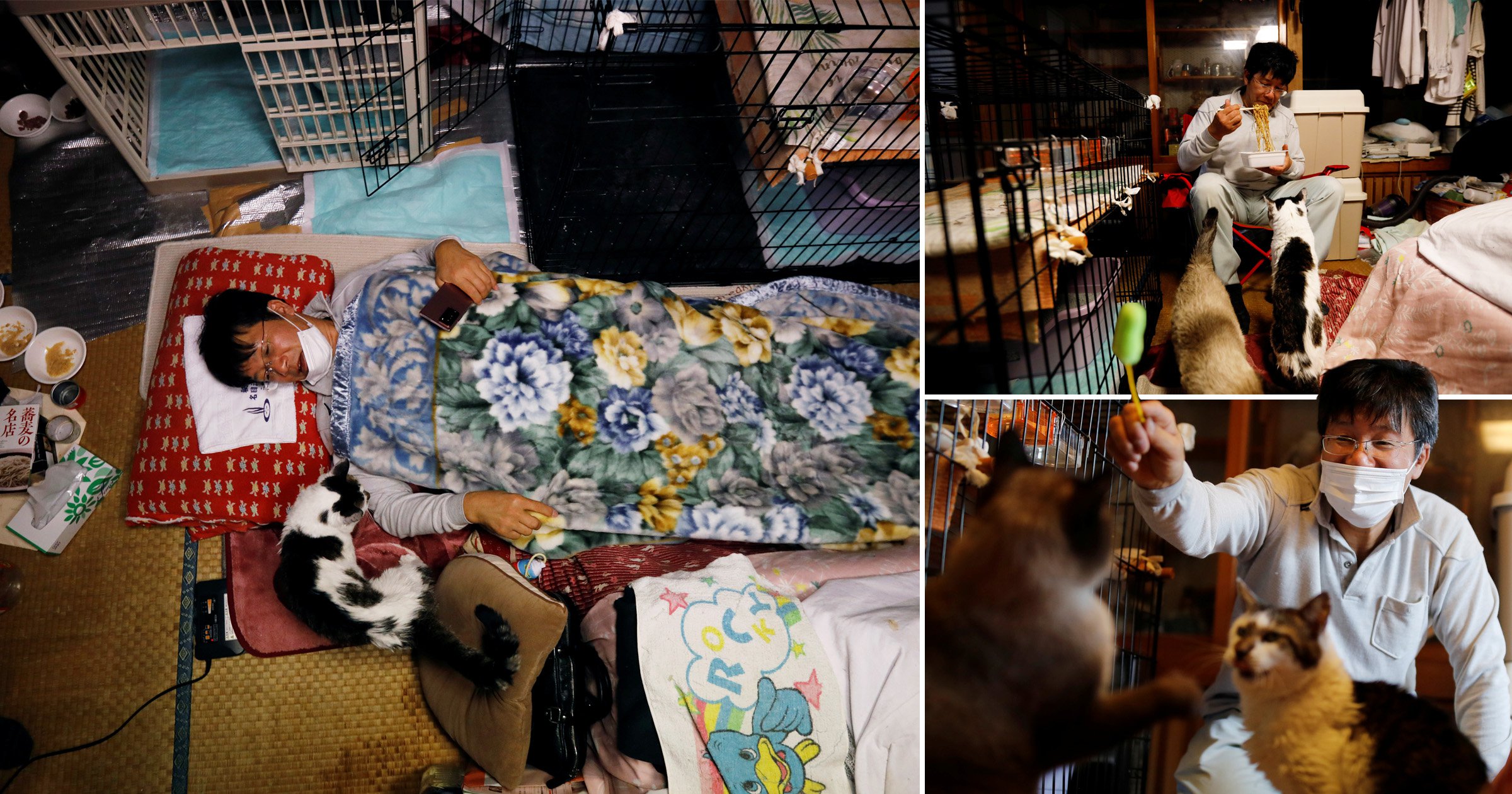 A decade ago, Sakae Kato stayed behind to rescue cats abandoned by neighbours who fled the radiation clouds coming from the nearby Fukushima nuclear plant.

He is still there, and has no plans to leave.

‘I want to make sure I am here to take care of the last,’ Sakae tells Reuters from his home in the contaminated quarantine zone.

‘After that I want to die, whether that be a day or hour later.’

So far, he has buried 23 cats in his garden, the most recent graves disturbed by wild boars that roam the empty community.

Sakae is looking after 41 other cats in his home and another empty building on his property.

He leaves food for feral cats in a storage shed he heats with a paraffin stove. He has also rescued a dog, Pochi. With no running water, he has to fill bottles from a nearby mountain spring, and drive to public toilets.

The 57-year-old, a small construction business owner in his former life, says his decision to stay as 160,000 other people evacuated the area was spurred in part by the shock of finding dead pets in abandoned houses he helped demolish.

The cats also gave him a reason to stay on land that has been owned by his family for three generations.

‘I don’t want to leave, I like living in these mountains,’ he said standing in front of his house, which he is allowed to visit but, technically, not allowed to sleep in.

The two-storey wooden structure is in poor condition. Rotten floorboards sag. There are holes where wall panels and roof tiles that kept the rain out were dislodged by a powerful earth tremor last month, stirring memories of the devastating quake on March 11, 2011, that led to a tsunami and a nuclear meltdown.

‘It might last another two or three years. The walls have started to lean,’ Kato says.

Decontamination in fields near his house signal that other residents will soon be allowed to return.

He estimates he spends $7,000 (£5,000) a month on his animals, part of it to buy dog food for wild boar that gather near his house at sunset. Farmers consider them pests, and also blame them for wrecking empty homes.

On February 25, Kato was arrested on suspicion of freeing wild boar caught in traps set up by Japan’s government in November. At time this article was published, he was still being detained for questioning.

Yumiko Konishi, a vet from Tokyo who helps Kato, said local volunteers were caring for the cats on his property, but at least one had died since he was detained.

About 30 km (19 miles) southeast, still in the restricted zone, Hisae Unuma is also surveying the state of her home, which withstood the earthquake a decade ago but is now close to collapsing after years of being battered by wind, rain and snow.

‘I could see my cattle in the field from there,’ she says pointing to the living room, a view now blocked by a tangle of bamboo.

Unuma fled as the cooling system at Tokyo Electric Power Co’s nuclear plant 2.5 km away failed and its reactors began to melt down.

The government, which has adopted Fukushima as a symbol of national revival amid preparations for Tokyo Olympic Games, is encouraging residents to return to decontaminated land.

Lingering fears about the nuclear plant, jobs and poor infrastructure are keeping many away, though.

Unuma, now a vegetable farmer in Saitama prefecture near Tokyo, where her husband died three years ago, won’t return even if the government scrapes the radioactive soil off her fields.

Radiation levels around her house are around 20 times the background level in Tokyo, according to a dosimeter reading carried out by Reuters.

Only the removal of Fukushima’s radioactive cores will make her feel safe, a task that will take decades to complete.

‘Never mind the threat from earthquakes, those reactors could blow if someone dropped a tool in the wrong place,’ she says.

Before making the four-hour drive back to her new home, Unuma visits the Ranch of Hope, a cattle farm owned by Masami Yoshizawa, who defied an order to cull his irradiated livestock in protest against the government and Tokyo Electric Power.

Among the 233 bullocks still there is the last surviving bullock from the 50-strong herd Unuma used to tend, and one of her last living links to the life she had before the disaster.

Her bullock ignores her when she tries to lure him over, so Yoshizawa gives her a handful of cabbage to try to tempt him.

‘The thing about cattle, is that they really only think about food,’ says Yoshizawa.

Do you have a story to share? We want to hear from you.