Maryland’s governor has posthumously pardoned a 15-year-old boy and 33 other victims of racial lynching in the state dating between 1854 and 1933, saying they were denied legal due process against the allegations they faced. It was a first-of-its-kind pardon by a governor of a U.S. state.

Gov. Larry Hogan signed the order at an event Saturday honoring Howard Cooper, a 15-year-old who was dragged from a jailhouse and hanged from a tree by a mob of white men in 1885 before his attorneys could file an appeal of a rape conviction that an all-white jury reached within minutes. 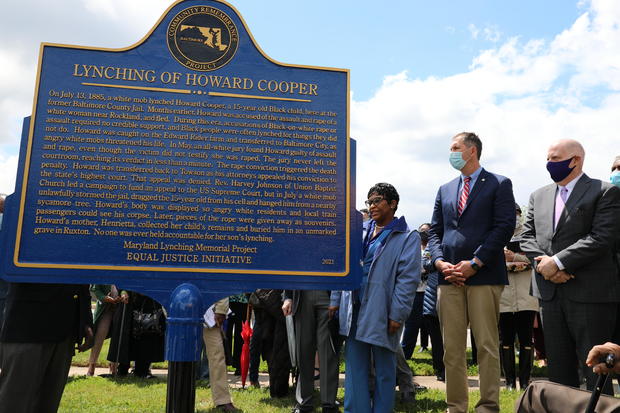 “My hope is that this action will at least in some way help to right these horrific wrongs and perhaps bring a measure of peace to the memories of these individuals and to their descendants and their loved ones,” Hogan said.

Hogan and other state officials attended a ceremony in Towson, Maryland, next to the former jailhouse where Cooper was held. A historic marker was unveiled at the site in a partnership with the Baltimore County Coalition of the Maryland Lynching Memorial Project, the Equal Justice Initiative and Baltimore County.

House Speaker Adrienne Jones, the state’s first Black and first female House speaker, described it as an important day when the governor, Attorney General Brian Frosh and Baltimore County Executive John Olszewski – all white men – came together to “say that this was wrong .. in order to move forward into the next chapter.”

“Memorializing the site where Howard Cooper was lynched gives us the opportunity to courageously confront the injustices of our past,” Jones said.

“This is just political posturing that nobody needs right now,” Flowers told CNN on Sunday. “If the governor’s going to do something, he should with his power as governor look at the many broken systems based on the same type of vitriol, contempt, hatred, that caused the murders of these gentlemen. Every system that has been broken, as the governor of Maryland, he alone can change all of it.”

Earlier this year, the Maryland Lynching Memorial Project and students at Loch Raven Technical Academy petitioned Hogan to issue the pardon for Cooper. After receiving the request, the Republican governor directed his chief legal counsel to review all of the available documentation of racial lynchings in Maryland.

“I was so inspired by that group of young middle school students, because we have no greater responsibility as leaders of a democracy than preserving for future generations the importance of clearly differentiating the difference of right from wrong,” Hogan said.

The sign unveiled Saturday said Cooper’s body was left hanging from a sycamore tree “so angry white residents and local train passengers could see his corpse.”

“Later, pieces of the rope were given away as souvenirs,” the sign says. “Howard’s mother, Henrietta, collected her child’s remains and buried him in an unmarked grave in Ruxton. No one was ever held accountable for her son’s lynching.”

The ceremony is part of a continuing effort by the Maryland Lynching Memorial Project, a group of 13 county chapters that is working to document the history of lynching in the state.

In 2019, a marker in Annapolis, the state capital, commemorated the five known Black men who were hanged or fatally shot without trial in Maryland’s Anne Arundel County.

The Equal Justice Initiative has documented more than 6,500 racial lynchings in the country.

Will Schwarz, who is president of the memorial project, described the posthumous pardons as a powerful moment in acknowledging the truth – a critical step toward reconciliation. He said the history of racial terror lynching in the United States has been ignored for so long that most people don’t know the scale of the problem.

“We have a responsibility to try and dismantle that machine of white supremacy and this is a big piece of it, acknowledging the violation of civil rights and of due process that were a part of these awful lynchings,” Schwarz said.

There have been 40 documented lynching cases in Maryland, Schwarz said. In some of those cases, the victims were not yet arrested, so they were not part of the legal system and not eligible for the posthumous clemency approved Saturday by Hogan.

Two years ago, state lawmakers created the Maryland Lynching Truth and Reconciliation Commission, which is the first of its kind in the nation. The commission was formed to research lynchings and include its findings in a report.

Gov. Hogan also sent a letter to President Biden encouraging him to establish a U.S. Truth, Racial Healing, and Transformation Commission. “A national commission would further this important work by examining racial healing through a larger lens,” the governor wrote.

The Equal Justice Initiative says nearly 6,500 documented racial terror lynchings occurred in the U.S. between 1865 and 1950.