Good Morning Britain viewers have pleaded for The Wombles to be ‘left alone’ as guests discussed the ‘woke’ remake of the 1970s television series.

In today’s show, Piers Morgan and Susanna Reid debated whether the major revamp of the BBC children’s show which is underway in an attempt to revise the series for a modern, politically correct generation, is ‘necessary.’

But while guest Eartha Pond suggested characters are unique and should be left as they are, Joanna Jarjue argued the Wombles should be changed to reflect society.

And viewers were quick to take to Twitter to offer their views – with the majority insisting the much-loved should be left alone.

‘The world has gone mad! There’s illness, viruses, homeless people, fires and floods around the planet and #GMB are having a debate about #Wombles being not #woke enough,’ wrote one, while a second penned: ‘Why can’t we just leave the Wombles alone, there is nothing wrong with how they are!’ 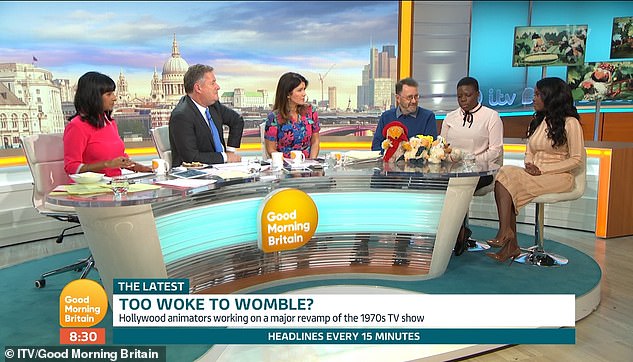 Viewers who tuned in were quick to take to Twitter, with one writing: ‘Why can’t we just leave the Wombles alone, there is nothing wrong with how they are!’ (pictured)

Marcus Robertson, the son of Elisabeth Beresford, the show’s creator, criticised the CGI remake, accusing the makeover of being an insult to his mother’s memory.

‘It seems so patronising to me,’ he explained. ‘I’m not a black person but if I was I’d think, “really?” You’re going to darken the skin tone of wombles to try and make some diversity point.

‘For me it’s a grating point, it’s unnecessary, and no one was calling for it. It kind of makes a mockery to me of what is a really important battle – which is a battle for diversity in all aspects of life.’

However, not everyone was in agreement, with Joanna arguing that the Wombles are in need of an update.

‘We’re now in a completely different generation,’ she explained. ‘It’s something that’s just letting the characters evolve into this new generation and I do think this is very culturally and in society a lot more relevant to the Britain we live in now.’ 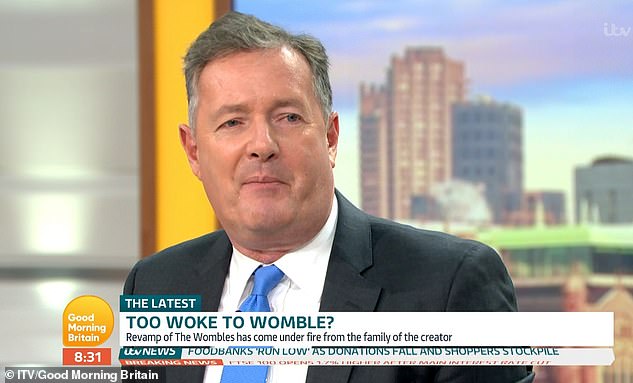 Piers Morgan (pictured) told how the ‘woke’ revamp seemed patronising and added: ‘For me it’s a grating point, it’s unnecessary, and no one was calling for it’ 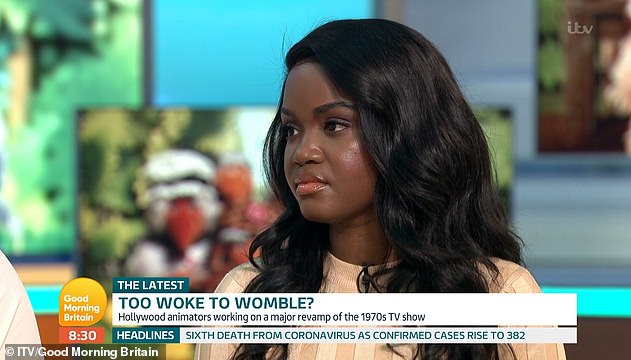 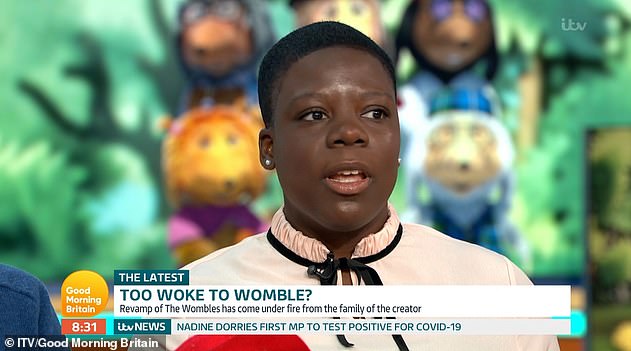 And when Piers jumped in and added they’re not human, she responded : ‘Yes, but they do human things, like recycle. When children what shows like this, when they’re watching a cartoon, those actions these characters are taking are relevant to these children.’

While Eartha agreed the actions the characters are taking is important, she added it doesn’t matter what colour they are that shows, “I’m going to make that decision to recycle or not recycle.”

‘It’s about someone within their mind has created a fictional character who does great things for the environment,’ she explained. ‘It’s about learning about the things they do – not what they look like or who they are.’

‘There are so many other ways to demonstrate diversify and inclusion. Why would you change it?

Piers went on to cite head boy Aker Okoye, 16, for doing more for diversity when he bounded on stage to embrace Meghan Markle during her visit to Robert Clack Upper School in Dagenham on Friday.

‘In ten minutes, that boy, for me, did more for diversity and inclusion and race issues than anything we’ve had on this programme in five years,’ he said. ‘Blacking up a Womble has the complete opposite effect to what the people doing it thinks they have.’

And many who tuned in took to social media to agreed, with one pleading: ‘Please please please leave the Wombles alone,’ and a second adding: ‘You cannot remake perfection.’

A third agreed: ‘The Wombles were lovely, part of people my age’s younger childhood. They were imaginary little creatures and their facial features were orange…like Basil Brush for example.’

‘I’m fed up with people who quote diversity all the time but just create division.’

Another took to social media and commented: ‘I’m fed up with people who quote diversity all the time but just create division’ (pictured)