Eddie Jackson went from being a star on the football field to a star in the kitchen! The ‘MasterChef’ star spoke to HL about working with his idol, Bobby Flay.

Eddie Jackson went from launching his own food trucks post-NFL career to starring as a host, judge or chef in multiple Food Network shows. The former cornerback recalled finding his footing in food after his stint in the NFL, and how Bobby Flay was a major inspiration. “I had a quick conversation with my dad when I retired at a fairly young age due to injuries, and he asked, ‘What else do you love to do?’ I loved cooking food, so I bought a food truck and started a catering company and the rest is history,” Eddie recalled in an EXCLUSIVE interview with HollywoodLife.

He went on to win the eleventh season of The Food Network Star, a competition series which has helped launch the careers of many celeb chefs, such as Guy Fieri and Jeff Mauro. In 2021, Eddie joined Bobby Flay and Michael Symon as a team captain on the series BBQ Brawl, in which he went head to head against his food idols in a barbecue cooking competition. 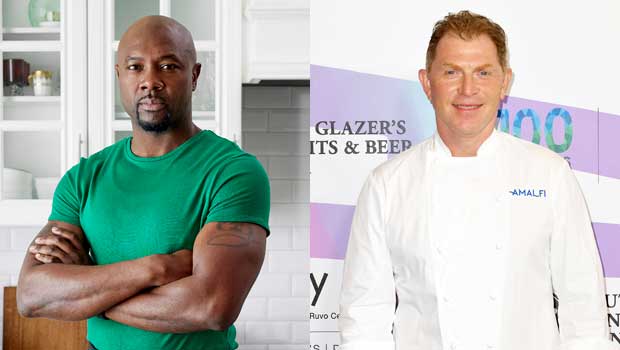 “It’s no secret Bobby Flay is what I consider to be my mentor and my idol when it comes to food. I mean, I’ve been watching him since I was a young teenager on Food Network, and he’s the OG when it comes to food personalities. He was like, the first one. So I’ve been watching him since his first show, Chillin and Grillin’,” Eddie admitted. “To be able to navigate my way through life and transitioning from something that I worked my whole life to do, which was football, to going into a totally different career path and now cooking with my idol, it’s just amazing.”

The former Carolina Panthers player released a cookbook combining his two careers, football and cooking, to produce a number of tailgate-approved recipes, titled Game-Day Eats: 100 Recipes for Homegating Like a Pro. Most recently, he teamed up with Sweet Earth to create a roster of plant-based, Game Day recipes for #Veganuary and ahead of the Super Bowl game! “I felt like it was a natural partnership. I stand behind the product, the product has amazing flavor, and taste is what’s important to me,” Eddie explained. “It felt like a natural fit for me to be able to take my game day experience  with recipes, being creative and creating these bold, flavorful dishes, and pairing it with Sweet Earth Mindful Chik’n.”

Kylie Jenner denies being in an open relationship with Travis Scott