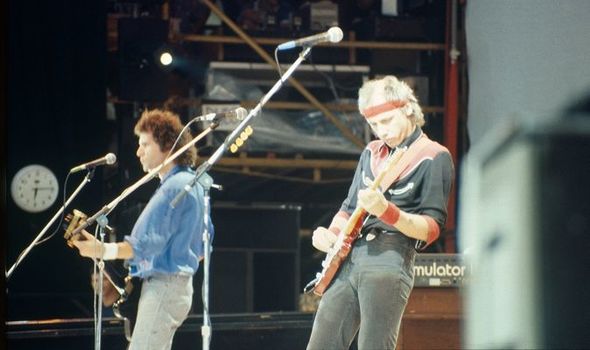 And who knew that the 80s megastars owed their entire existence to a grotty south London council estate? “If I hadn’t jacked in my job and gone to Goldsmith’s College, I wouldn’t have got a council flat,” bassist John Illsley tells me. “And if I could have afforded the rent, I wouldn’t have needed a flatmate”… who turned out to be Glasgow-born social worker and rhythm guitarist Dave Knopfler, “a friend of a friend, who needed a place to live…

John, 72, wrote his memoir, My Life In Dire Straits, during lockdown. “I thought I’d better get some of it down before I forget it all,” he jokes over the phone from Provence. He could hardly forget the day he met Mark, though.

Illsley found his future bandmate lying comatose on the concrete floor of his flat with a Gibson electric guitar across his chest, surrounded by a detritus of dog ends and empty Newcastle Brown bottles.

Mark says they “felt like old friends from the beginning.”

Their first live performance was at a 1977 punk festival, held outside their flat, on the Farrer House lawn – “we were the odd ones  out,” laughs John, “the misfits, doing our own thing!” They used local band Squeeze’s PA, and their flat as the dressing room.

Dire Straits honed their craft playing the local Albany Empire and that same year recorded a five-track demo, including Sultans Of Swing, thanks to the £500 John’s grandmother left him in her will.

This is where DJ Charlie Gillett enters the story. John and a former girlfriend had opened a record store in Kentish Town three years before. It lasted a matter of months, but John had written to Gillett at Radio London asking what records to stock and he wrote straight back with tips.

“He was a champion of up-and-coming bands, in a different way to John Peel,” says John. “Charlie’s music was kinder on the ears.”

Illsley had Gillett’s home address, so he and Mark delivered their demo, not expecting much. “We dropped it off on the Thursday and he played it on Sunday morning. He said Sultans was the best new song he’d heard in years. The phone started melting on the wall.

“The response was extraordinary. We had to learn how the business worked very quickly.”

Their brand of tightly played, almost serene rock was like nothing any other band was playing. Competition to sign them was fierce and Richard Branson was determined to win.

“We were who invited to a Greek restaurant in Paddington; it was hilarious,” John recalls. “We were ushered into a private room full of attractive women who were not overly dressed. A waiter brought in a tray of rolled joints and during the meal one of the women sat next to each of us and their hands started wandering under the table.

“Had Mark and I been 18 and not 29 we might have been seduced by the glamour, but we knew the deal Virgin were offering wasn’t great.”

Branson later referred to that evening as “the night I blew $1billion”.

Rock journalist Richard Williams advised them to get a lawyer who specialised in music-industry contracts, and they finally signed to Phonogram for a £47,000 advance – around £250K today.

“It all happened very quickly,” says John. “In 1977 we had no roadies, and Mark and I were humping bins [speaker cabinets] into the Hope & Anchor. We ended up with 150 roadies, it became a massive machine.”

Grammys and Brits followed, but the Dutch awarded them first. “The other residents of Farrer House were bemused when a big limo turned up to take us to the airport,” he smiles.

Italy wasn’t quite so friendly. “That was the heaviest. It got very edgy. In Milan thousands of people broke into the stadium. It was a riot. The roadies had to weld baseball bats to keep the mob at bay.

“Paul Cummins, our tour manager, got a gun pulled on him in Bologna. Back then you couldn’t play Italy without the say-so of the Mafia. It was like the Wild West. I don’t regret playing there but I was happy on the plane flying out.”

It was a far cry from life as a privately educated banker’s son in rural Leicestershire.

For Illsley, becoming a pro musician was the realisation of a dream that formed listening to Little Richard and Elvis on Radio Luxembourg, courtesy of his brother Will’s crystal radio set at home in Market Harborough.

Inspired by the Beatles, he saved his pocket money for months to buy a Rosetti Lucky Seven guitar. At 18, Will invited him to join his covers band, The Knott – and built him a bass guitar.

Unable to hold down a job at Lloyd’s Bank, John worked in a soup factory where he cleaned mixing machines, until he forgot to turn one off and nearly lost the tip his right thumb.

Mercifully the surgeon reattached it. “Half an inch deeper and I’d have never played a guitar again…”

His last “proper” job was as trainee manager at a timber yard in Erith, Kent. He sparkled, but to his parents’ horror, John quit to become a full-time sociology student at Goldsmiths.

He stayed at a friend’s Deptford flat, coming home to find the front door had been kicked in and “the whole place had been smashed to pieces, including some of my favourite records, there was blood on the floor, ceiling and walls…”

The angry boyfriend of a student John had slept with had inflicted the damage. “It was a one-night stand, I had no idea she was attached…”

Father-of-four John now lives in Hampshire with his second wife Stephanie, with a second home in France. He owns a pub called the East End Arms, he paints and releases his eighth solo album, VIII, in January.

Illsley fronted a Sky series called Guitar Heroes and appeared on Rick Stein’s Secret France, but like the rest of Dire Straits, he never courted celebrity. “Success yes, fame no thank you,” he says. “Mark likened fame to the fumes that come out of a car exhaust.”

His book, he says, is “a celebration of what we did and all the people we worked with.”

He pauses and adds, “There was never any calculation with Dire Straits. We were what we were. We were fortunate a lot of people liked it.

“I feel really blessed. It was an incredible thing to be a part of, and that people still listen to it. I enjoy getting emails from 18year old Chinese kids saying that they enjoy my music and asking what bass I used on this song or that.

“It’s great to realise your still touching people in all four corners of the world.”

My Life in Dire Straits by John Illsley (Bantam Press) is out now.