Home » Lifestyle » CALVIN ROBINSON: Believe me, there's no racist like a hard-Left racist

Believe me, there’s no racist like a hard-Left racist: After a charity supposedly fighting for equality trolled CALVIN ROBINSON with a vile historical trope, he reveals the insults he often receives from left-wingers

After the initial shock and revulsion wore off, I felt oddly glad this week that a prominent Left-wing anti-racism charity had decided publicly to hurl a vile racist slur at me.

At last, I thought, people are going to hear about the abuse that is doled out to centre-Right individuals like me all the time, almost always from black and ethnic minority figures on the hard Left.

They often call me ‘Bounty’ or ‘coconut’ — sneers implying that I am somehow ‘brown on the outside, white on the inside’.

I get called ‘Uncle Tom’ and ‘race traitor’ because I refuse to believe the colour of my skin means I am automatically a victim of ‘white oppression’. 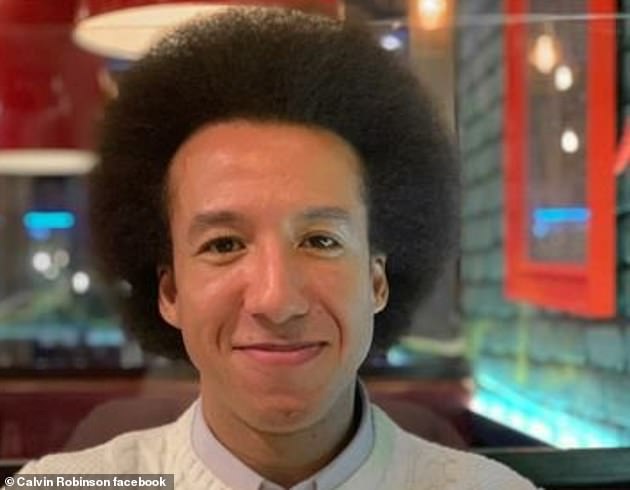 After the initial shock and revulsion wore off, I felt oddly glad this week that a prominent Left-wing anti-racism charity had decided publicly to hurl a vile racist slur at me, writes Calvin Robinson

This time, after I had appeared on the long-running BBC discussion show The Big Questions last Sunday morning, I saw a message on Twitter from Aysha Khanom, the founder and director of the Race Trust charity, which works with schools and universities and purports to promote ‘racial equity’.

Aysha Khanom personally tweeted of me: ‘Please somebody deal with this man!’

I found that menacing. I don’t know exactly what she meant by it, but it echoes the sort of language that Tony Soprano would use when he wanted a rival rubbed out.

‘Deal with’ could easily be read as an incitement to violence.

But I shrugged it off. If I obsessed over every piece of abuse I receive through my phone, I would never think about anything else.

Shortly afterwards, though, the Race Trust Twitter account also attacked me — and this time it was less ambiguous.

‘Calvin Robinson,’ the tweet read, ‘does it not shame you that most people see you as a house n****?’

‘Calvin Robinson,’ the tweet read, ‘does it not shame you that most people see you as a house n****?’ 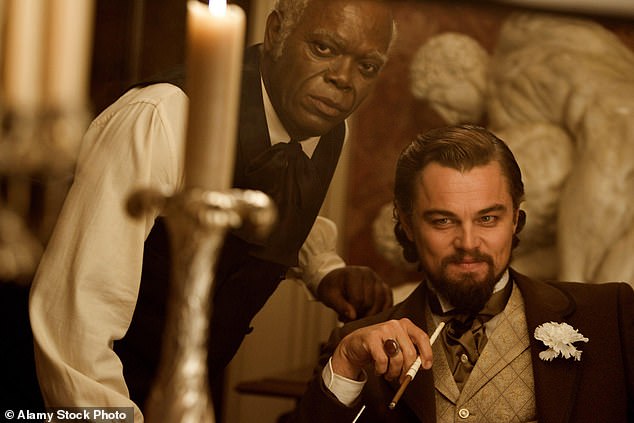 ‘House n****’ is an expression that originated on the plantations of America’s Deep South, where black servants who did lighter work indoors were detested by those breaking their backs in the cotton fields. The 2012 film Django Unchained is seen above starring Samuel L. Jackson

I knew immediately that any decent person would find that language abhorrent. And sure enough, within 48 hours, Leeds Beckett University, which had worked closely in the past with the Race Trust, cut all ties and deleted Aysha Khanom’s profile from its website.

For what it’s worth, Race Trust now denies Aysha Khanom sent that second tweet. It claims it came from an anonymous employee without approval, and that this unnamed person has since been dismissed.

Well, perhaps. To me that sounds rather too much like the childhood excuse that ‘the dog ate my homework’. But without any evidence to the contrary, we must take the group’s denial at face value.

Yet while I am ready to forgive the Race Trust, the retraction it issued yesterday was mealy-mouthed. The charity said: ‘We accept this was an ill-informed tweet and have taken the appropriate steps to deal with it.’

There was no apology to me for labelling me with a racist slur.

‘House n****’ is an expression that originated on the plantations of America’s Deep South, where black servants who did lighter work indoors were detested by those breaking their backs in the cotton fields.

Supposedly, the former had landed their cushy jobs by cultivating a servile, fawning attitude.

So to call me a ‘house n****’ is to accuse me of actively seeking personal advantage by grovelling to white people and betraying black people.

I will not be driven off social media, though. For every vile message, I receive ten more that are supportive, encouraging and grateful

How anyone claiming to be an ‘anti-racist’ can use that sort of language is so hypocritical that it staggers me — as does the idea that having brown skin and holding conservative beliefs are somehow incompatible in a person unless evil white people have brainwashed them.

In the terminology of the hard Left, I am a puppet controlled by oppressive white puppet-masters, who use me to spout their own messages. I am incapable of forming and voicing my own opinions.

It is all a nonsense. But although this abuse may have shocked Leeds Beckett University and fair-minded observers, I have become mostly hardened to it.

I admit I find it hurtful, and sometimes the stress of these continual attacks even keeps me awake at night. But I will not be intimidated or bullied into submission. And racism, however threatening, will not stop me.

The basketball star Kofi Josephs, who plays for the British national squad, tweeted to me: ‘Your afro ain’t hiding the coon chip my guy.’ The British-Ugandan actor Arnold Oceng repeated the ‘coon chip’ slur, adding a picture of a computer circuit board.

‘Coon chip’ is internet slang, implying that I am a robot programmed to be a subservient black man. It’s an Americanism —but all this language is rooted in U.S. racial divisions.

I will not be driven off social media, though. For every vile message, I receive ten more that are supportive, encouraging and grateful. Many people contact me on Twitter to thank me for saying what they believe but cannot (or dare not) say themselves.

The sad truth is that many on the Left want to remove my freedom to speak independently.

To them, my skin colour means I am supposed to be part of a homogenous, faceless group, without a mind of my own.

But I am more than that. I am British, a Christian, a Midlander, a former computer programmer, a qualified teacher, a political adviser, a son and a brother.

I have many elements to my identity, and all these things have far more effect on how I see the world.

Above all, I believe in self-reliance and personal responsibility. I want to make the most of my life and refuse to see myself as oppressed or downtrodden.

This attitude seems to offend a lot of Left-wingers, who are stuck in the mentality of victimhood. They want someone to blame for all the ills of the world, so they decide that society must be systemically racist.

And of course, the more they howl about divisions, the more divided the world becomes.

Charities and other organisations preach and indoctrinate people with this poisonous racial dogma. It is happening all over the country: teachers and parents frequently send me teaching material that blatantly promotes the controversial theory of ‘white privilege’ as an undisputed fact.

Children from ethnic backgrounds are constantly told they will face additional hurdles and barriers — ones their white classmates won’t see. In this way, deeper divisions are being opened up, even in primary schools.

Children who might be best friends on Monday will be split into mistrustful, resentful tribes by Friday.

That’s why I am glad that, for once, this poison spilled into the open with Aysha Khanom and the Race Trust’s tweets this week.

The organisations and individuals stirring up racial hatred will continue to do so unless they are forced to stop by public opinion.

Their existence depends on division, after all — without racism, they would have nothing to do. It suits them to fuel it. Hatred is their livelihood.

Britain is the most diverse, tolerant nation on earth, the least racist and the most multicultural. I reject all those disgusting terms that come from American history and refuse to have them imposed on me and my country.

Anyone can live a fruitful life here and achieve success but a very small minority of people want to undermine that and wreck it.

I’m glad they have exposed themselves this week for the nasty-minded, abusive trolls they are.