A mother whose twin sons look ‘two different races’ says she is forced to explain they share the same father.

Leaetta Harris, 29, who is is Caucasian and African-American, and partner Lamba Crane, 35, who was born in Gabon to an African mother and Caucasian-American father, welcomed sons Makai and Ellion in 2020.

The couple, who live in Vermont, were immediately struck by how different their sons looked. 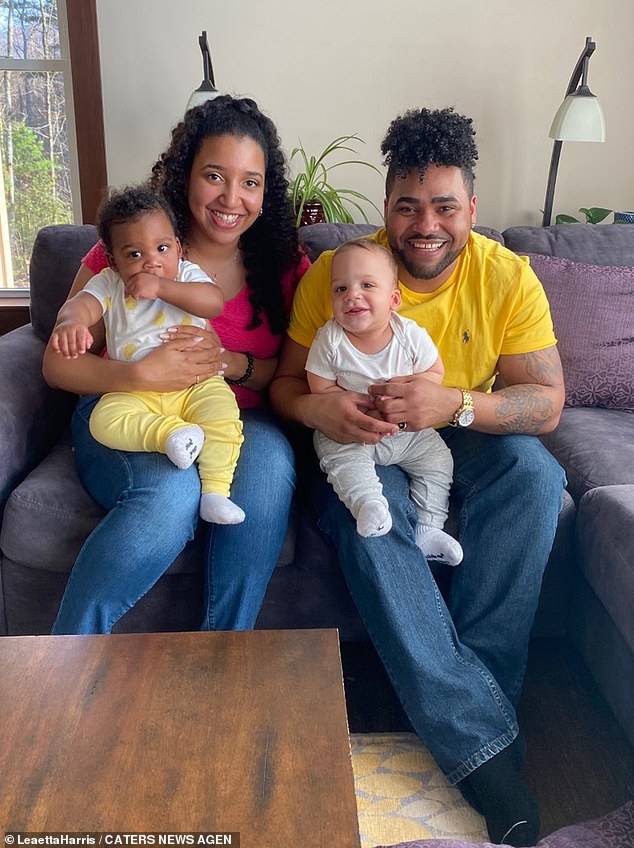 According to Leaetta, twins do not run in either family, and babies Makai (left) and Ellion (right) were conceived naturally 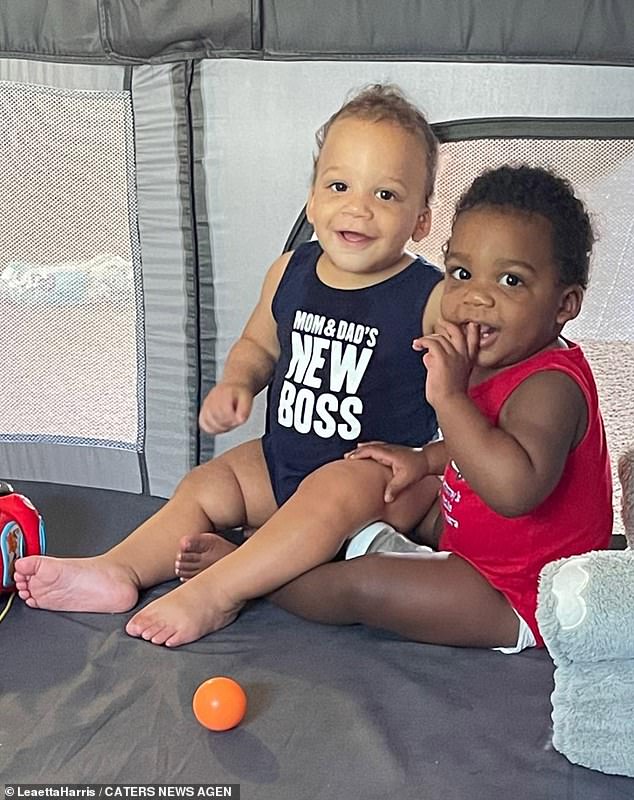 According Leaetta, the boys are ‘two totally different people with their own personalities’ describing Makai (right) as ‘more outspoken and emotional’ while Ellion (left) is ‘more laid back and independent’ 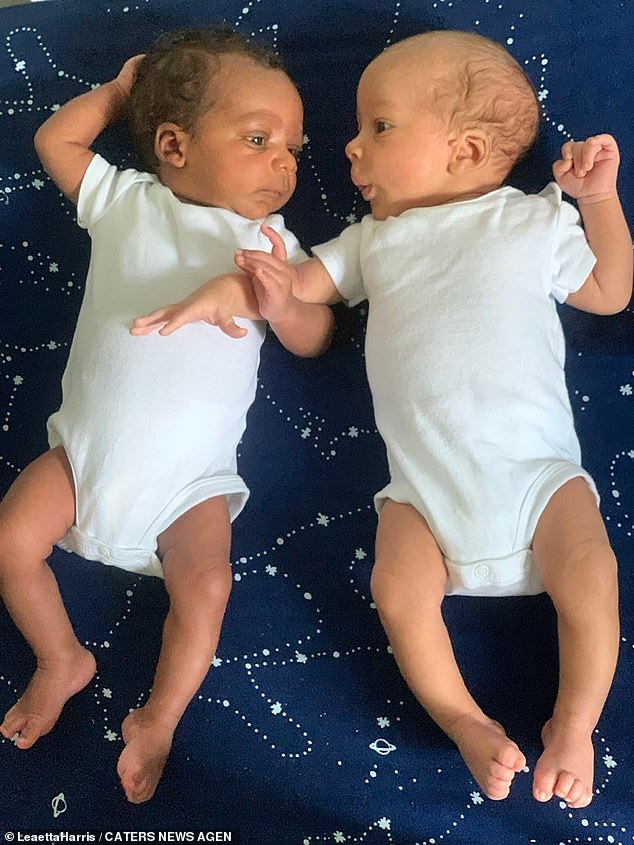 Makai (left) and Ellion Crane (right), now 13 months old, are fraternal twins. They were born to bi-racial parents in Vermont 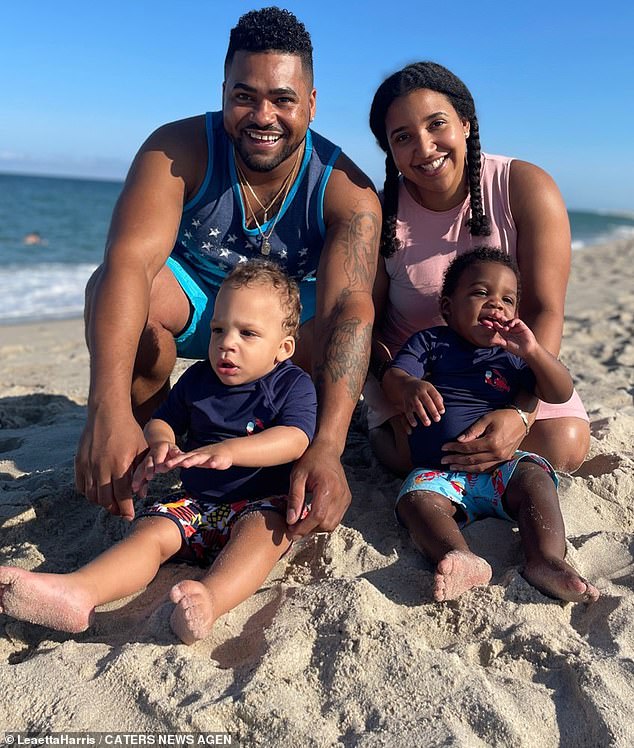 Stay-at-home mother Leaetta Harris, 29 with her partner Lamba Crane, 35 and their sons Ellion (left) and Makai (right). The parents say it is extremely important that they teach the babies about racism

Leaetta said: ‘They definitely look like two different race babies. People always ask if they are twins and then are shocked and confused when we say ‘yes.’

‘Some extended family have made joking comments asking if they really have the same dad, which they do.’

Leaetta says she has never seen twins looking different races when born to mixed race parents and believes their sons are unique.

She added: ‘We think our kids are very rare. We are very proud to have created such different babies. We have never seen twins like the boys before, only online.

‘The two or three stories we did read about had different parent combinations than us though.

‘All other twins with different skin colours come from either a full white or black parent or one mixed and one full black parent.’ 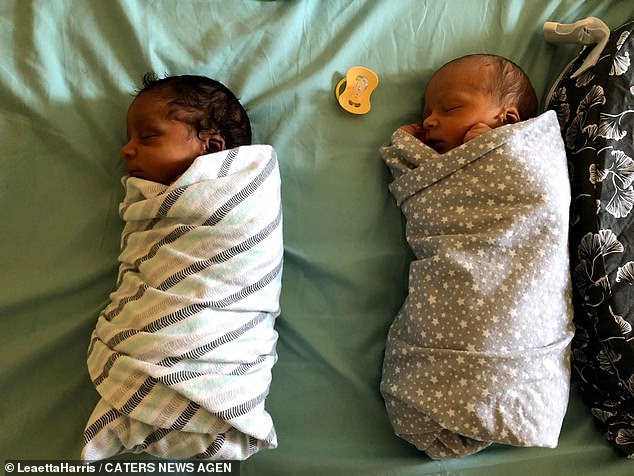 Makai (left) was born with thick black hair, while his brother Ellion was initially bald. Now at 13-months-old, Ellion has golden locks 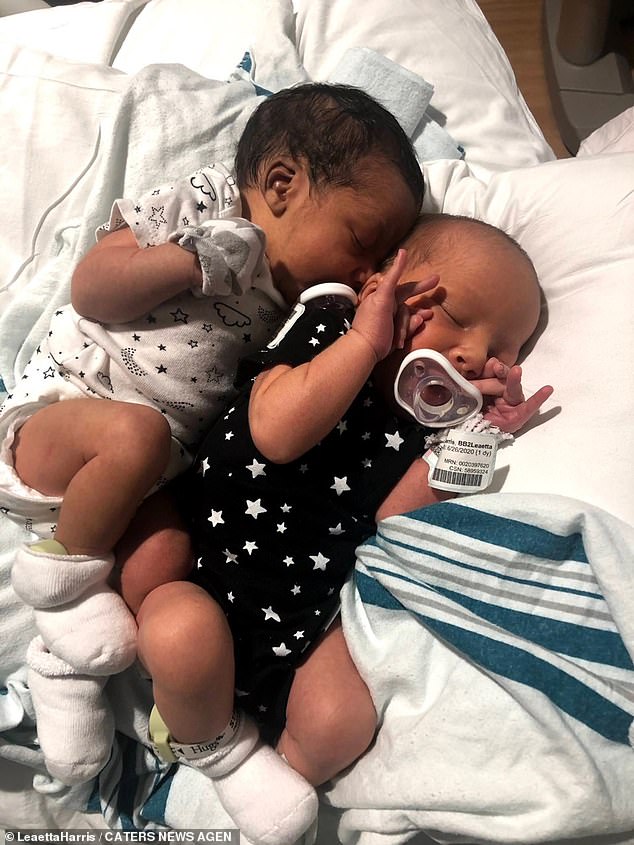 The twins are dichorionic diamniotic (di/di) – this means they shared the womb but had their own placentas and sacs. Makai (left) was born first, then Ellion arrived just four minutes later 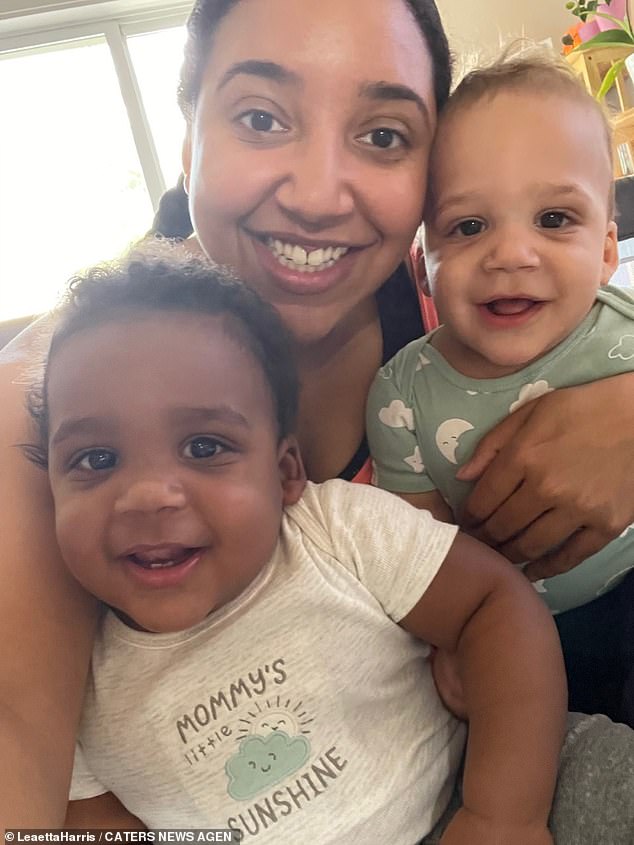 Mother Leaetta Harrris with Makai and Ellion. Leaetta, who is Caucasian and African-American, says she is ‘very proud to have created such different babies’ 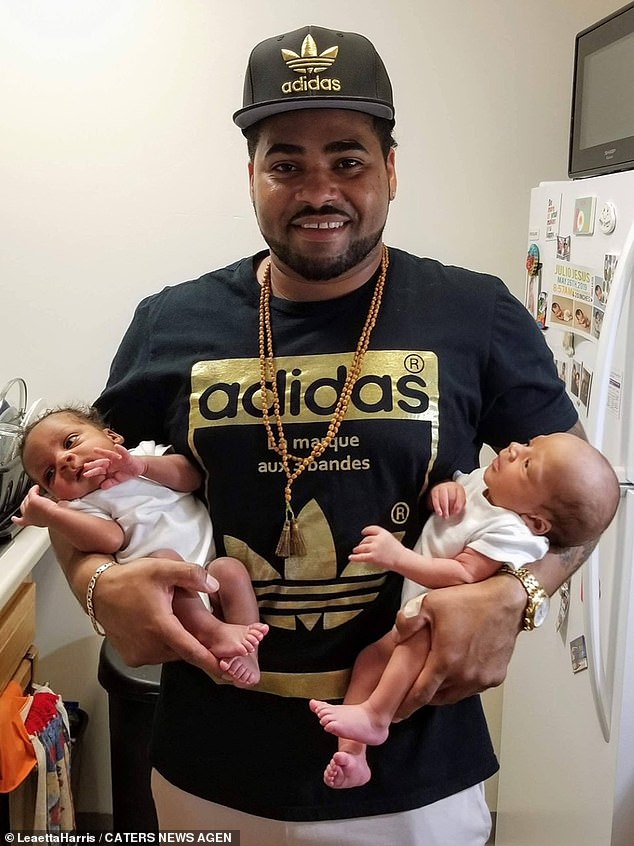 Father Lamba Crane, 35, (pictured) was born in Gabon to an African mother and Caucasian-American father

The twins are also dichorionic diamniotic (di/di) twins which means they shared the womb but had their own placentas and sacs.

They were born via C-section, Makai first and then Ellion, just four minutes apart.

The boys’ mother added: ‘They are two totally different people with their own personalities. Makai is more outspoken and emotional while Ellion is more laid back and independent. They are learning French.

‘Makai is more muscular than Ellion and they have totally different head shapes.

The stay-at-home mom and her partner, who also has a son from a previous relationship, were astonished when she first saw the twins. 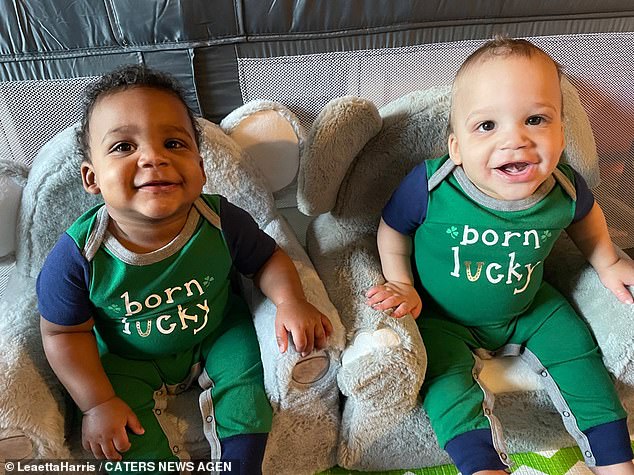 The twins’ father Lamba had ‘a moment of scepticism’ when the twins (L-R Makai and Ellion) were first born, ‘wondering how it was even possible’ for one baby to have a significantly lighter skin tone 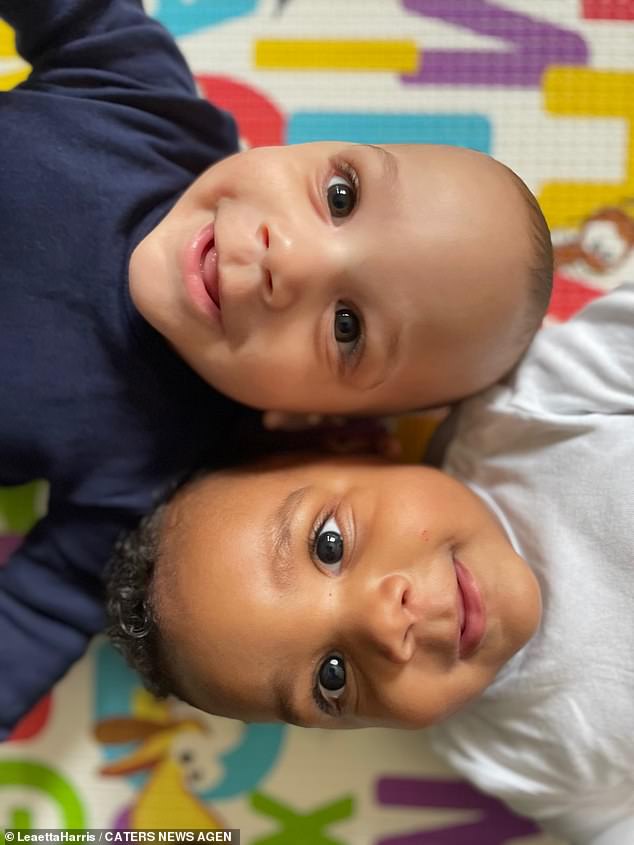 According mother-of-two Leaetta, she and partner Lamba expected the babies to ‘have the exact same skin colours as us since we are both mixed’ 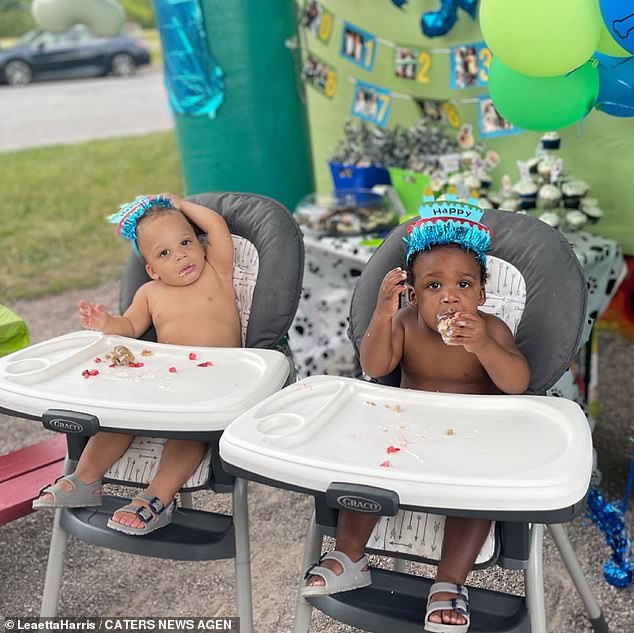 Leaetta said: ‘Twins do not run in either family and they were conceived naturally.

‘We were surprised to see that one was way lighter than the other. We expected the babies to have the exact same skin colours as us since we are both mixed.

‘Their dad had a moment of scepticism at first wondering how it was even possible.

‘We thought that they were just light from being inside the womb and that their skin would darken over time but Makai got darker than both of us and Ellion is still just as light.’ 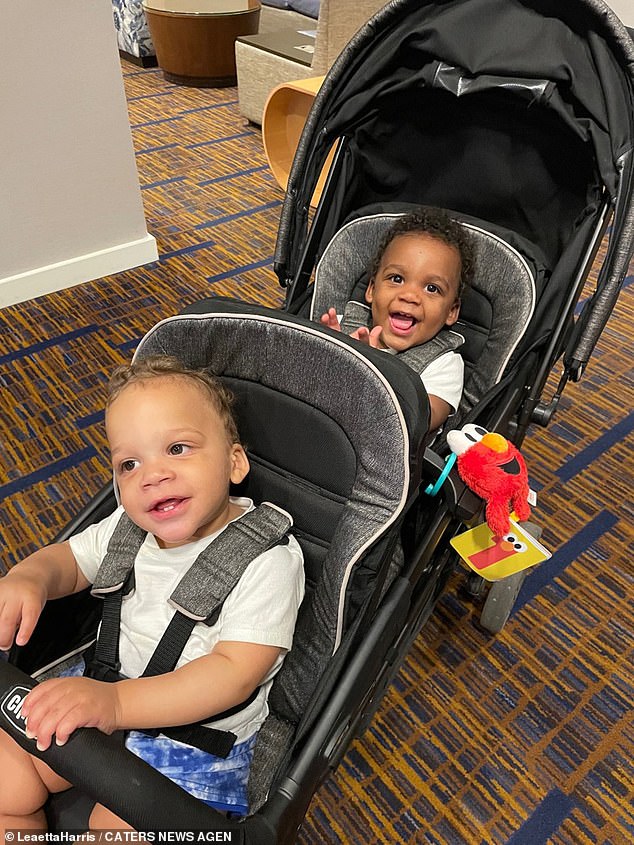 Ellion (left) and Makai (right) have become popular on social media. Leaetta regularly posts their pictures on Instagram to show people there are twins like them and that families come in many colours 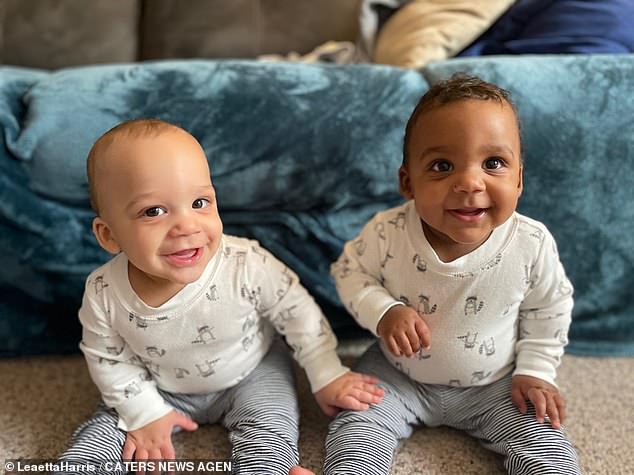 Speaking about her sons Ellion (left) and Makai (right), proud mother Leaetta said ‘we think our kids are very rare…we have never seen twins like the boys before, only online’

The twins have become popular on social media where Leaetta regularly posts their cute pictures on Instagram with a purpose to show people that there are twins like them and that families come in many colours.

As the children look two different races, Leaetta said as mixed raced parents who have faced racism while growing up, she expects the babies to face such tough questions on their skin colour.

But says she will teach her sons about racism and prepare them to face any situation in future. 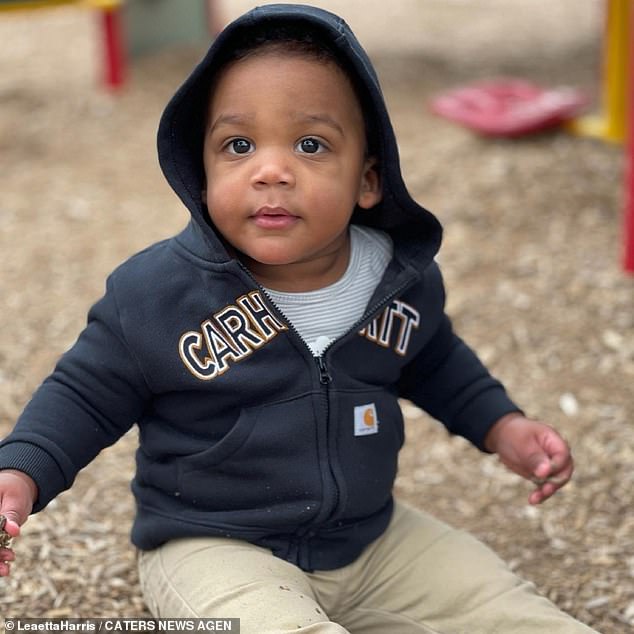 Makai (pictured) is the oldest brother, born four minutes earlier than his younger sibling Ellion. They were both born via C-section 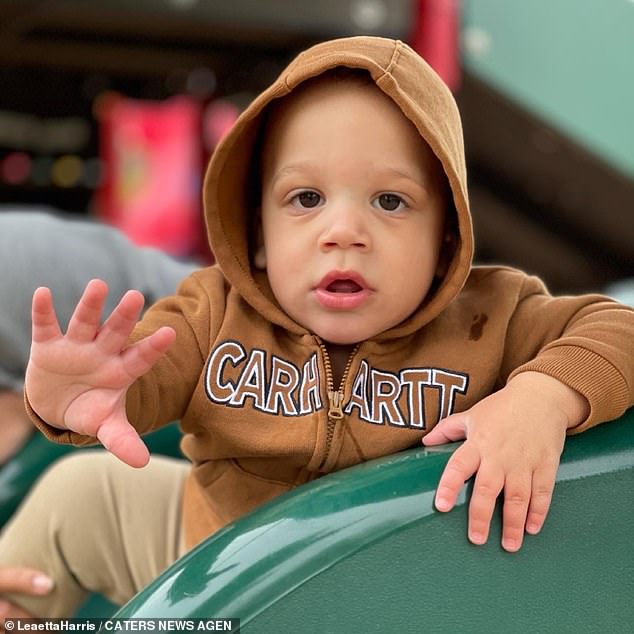 She added: ‘We absolutely have to teach the babies about racism in the world they live in. There’s just no need for racism- skin can be any colour and it should not matter. Their father and I have both experienced racism and sadly know it is expected.

‘Since Lamba was born in Africa as a half white child he went through a lot of things that most children do not go through.

‘He experienced racism from both Africans and Caucasians so it is extremely important to him that we teach the babies about the subject.’