The Royal Australian Navy has grounded its fleet of MH-60R Seahawk helicopters after one of the aircraft crashed in the Philippine Sea.

Three Navy personnel on the helicopter suffered minor injuries, and are now safe, after ditching the aircraft during a routine flight on Wednesday night. 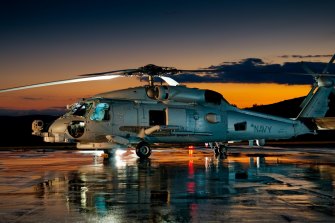 The helicopter was operating from destroyer HMAS Brisbane as part of a deployment with HMAS Warramunga when the crew conducted an emergency landing in the water.

Mr Dutton said an investigation will be urgently conducted to assess what went wrong.

“We want to learn the lessons,” he told 2GB on Thursday morning.

Commander of the Australian Fleet, Rear Admiral Mark Hammond, commended the crews of both ships involved for their quick response to the emergency.

“The successful rescue is credit to the devotion to duty and skill of the officers and sailors of HMAS Brisbane,” he said.

“Their immediate actions ensured the survival of the aircrew, validating the significant training undertaken in the event an emergency of this nature occurs.”

Both ships are continuing their search of the area for any debris which will aid in determining the cause of the incident.

“With the aircrew safe, investigating the circumstances that led to the helicopter ditching is the priority at the moment,” Rear Admiral Hammond said.

“As a precaution, we have temporarily paused flying operations of the MH-60R Seahawk fleet.”