Archaeologists digging up the site of Birmingham’s main HS2 train station have uncovered what could be the ‘world’s oldest railway roundhouse’.

The roundhouse, based on a design by Robert Stephenson was discovered on the site of the original Curzon Street station which operated from the 1830s to 1960s.

The Victorian building is thought to have been among the structures demolished from 1860 to 1870 to allow for the expansion of the station.

Historians say it was first operational as early as November 12 1837, meaning it predated a similar building in Derby by almost two years. 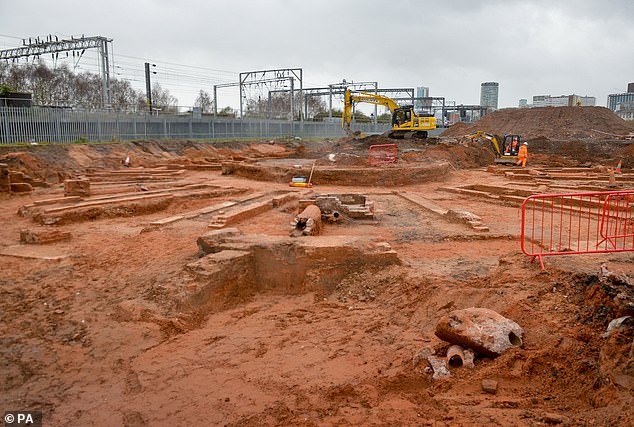 Archaeologists work at the site of a 19th century roundhouse which has been unearthed during the excavation work for HS2 on the site of the former Birmingham Curzon Street railway station, which opened in 1838 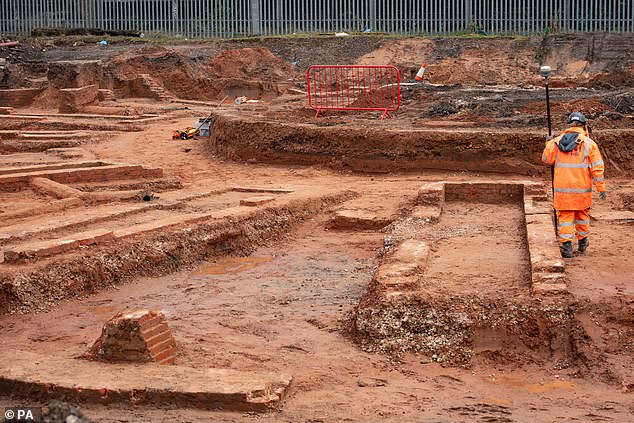 Built to a design by Robert Stephenson, the London and Birmingham Railway building was operational on 12 November 1837, making it what is thought to be the world’s oldest railway roundhouse, predating the current titleholder in Derby by almost two years

Among the surviving remains of the Curzon Street roundhouse are evidence of the base of the central turntable, the exterior wall and the 3ft deep radial inspection pits which surrounded the turntable.

Final archaeological excavations on the city centre site are about to take place, ahead of work to build the new HS2 Curzon Street terminus.

The terminus is at the centre of a 141-hectare regeneration project in the city.

Jon Millward, historic environment adviser at HS2 Ltd, said: ‘HS2 is offering us the opportunity to unearth thousands of years of British history along the route.

‘The discovery of what could be the world’s oldest railway roundhouse on the site of the new HS2 station in Birmingham City Centre is extraordinary and fitting as we build the next generation of Britain’s railways.’

Built to a design by Robert Stephenson, the London and Birmingham Railway building was operational as early as 12 November 1837.

This makes it what is thought to be the world’s oldest railway roundhouse, predating the current titleholder in Derby by almost two years.

The site was visited last month by Prime Minister Boris Johnson, who hailed the decision to go ahead with HS2 as ‘fantastic’ for the whole country.

It takes up to two hours to get from Birmingham to London now – depending on the station you leave from – and the government says HS2 will cut that to under an hour.

This isn’t the first major discovery found as a result of stations and tracks being dug up for the new high speed rail network.

Last year a team of 70 archaeologists spent a year excavating a 19th-century Victorian burial ground in Park Street, Birmingham where a station on the high-speed route is set to be built.

Forensic combing of the burial ground also found a treasure trove of historical artefacts including figurines, coins, toys and necklaces inside the coffins.

Along with the thousands of skeletons, these items will now be examined and informed by historical documents, such as parish records and wills, to develop detailed biographies of the individuals. 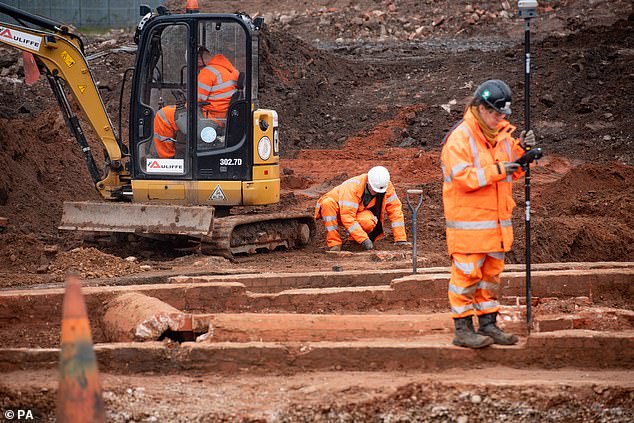 Trial trenching on the construction site has revealed the remains of the station’s roundhouse including evidence of the central turntable, the exterior wall and the radial inspection pits

At the London end of the line a ‘once in a generation dig’ in 2018 unearthed everything from the body of a bare-knuckle fighter to neolithic tools.

Researchers dug up a graveyard next to London Euston station where Bill ‘The Terror’ Richmond, a fighter who also earned the favour of King George IV, was buried.

Neolithic tools, medieval pottery and Victorian time capsules were discovered in the early stages of the dig which organisers say was a ‘once-in-a-generation’ opportunity to explore British history.

A hunter-gatherer site on the outskirts of London, a Roman British town near Aylesbury and a World War II bombing decoy in Lichfield are among the historic sites which fall along the route of the new high speed line.

HS2 trains will have a top speed of 225mph, but only on relatively straight stretches of track – around 60 per cent of the line from London to Birmingham.

The first HS2 trains, between Old Oak Common in west London and Birmingham, could be running by 2029.

A Government-commissioned review led by former HS2 Ltd chairman Doug Oakervee leaked earlier this week stated that the project’s bill could reach £106billion. But HS2 was only allocated £56billion in 2015.

WHAT ARE THE PROPOSALS FOR A 1,000-MILE UK HIGH-SPEED RAIL NETWORK?

A report by Surrey-based think tank Greengauge 21, titled Beyond HS2, said boosting national productivity should be the guiding priority for re-designing the rail network.

The proposals lead to a re-orientation of Britain’s railway – from a single hub around London to a national railway network.

1. An upgraded fast route from Birmingham to Bristol Parkway carrying HS2 trains, continuing to the South West and South Wales.

2. A major upgrade to the East Coast mainline for the first time since the 1980s.

4. New lines in East Essex and Anglia, alleviating the West Anglia and Great Eastern Mainlines, both of which are at capacity.