The British author you’ve probably NEVER heard of who is selling a million pounds worth of books each month: Alice Oseman, 27, flunked her Cambridge entrance exam and started her Netflix-hit Heartstopper as crowd-funded, self-published graphic novels

Her intelligence was evident from the start – she flew into Rochester Grammar School, a selective secondary, and her teachers thought that she could get into Cambridge University.

Instead Alice Oseman, whose mum Trudi works at Kent university and whose father Matthew is a high-level computer engineer, flunked her Cambridge entrance exam… and became a publishing sensation.

She was just 17 when she signed her first two-book deal for the novel Solitaire.

What she wanted to read, she explained, was a book about a strong female character who had a life-changing moment which didn’t involve a man. Unable to find this, she simply wrote one herself.

Ten years later, she is aged 27 and recently moved into a flat in south London on her own, and Oseman-authored books are selling more than J.K Rowling, David Walliams, Sally Rooney or Lee Child.

She’s been selling around a million pounds worth of books a month in the UK alone. 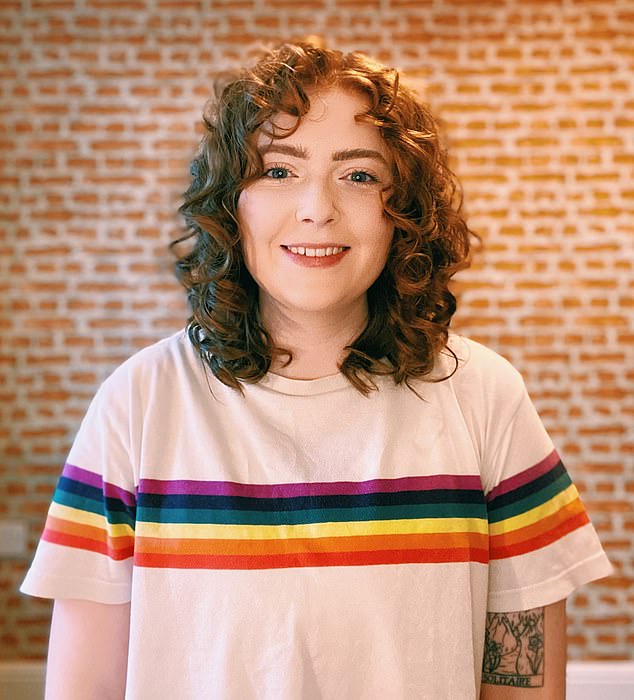 Alice Oseman is aged 27 and recently moved into a flat in south London on her own, and Oseman-authored books are selling more than J.K Rowling, David Walliams, Sally Rooney or Lee Child

The reason is the phenomenon of the Heartstopper graphic novels. They started out in 2016 as crowd-funded, self-published graphic novels for teens about a shy 15 year old boy who falls in love with a rugby playing lad in his class at school.

After being adapted for TV by Netflix – the show started streaming in April – they have taken off as a global brand. They have already broken all records for the sales of a graphic novel in the UK.

The show has been a huge hit for Netflix in over 50 countries, and the streaming giant has already ordered series two and three.

Meanwhile, demand for the books is huge. Figures released by Nielsen show that total print book sales in the UK for Oseman titles amounted to £5.5 million from January to June.

Publishers Hachette say that the novels have been topping the charts since the spring, with all four volumes and the colouring book selling briskly. This week, Heartstopper Volume 1 is in the number one slot.They are bringing out a Heartstopper Yearbook in October.

Internationally, the picture is rosy. The Heartstopper books have sold over 4 million copies worldwide and its in the Top 10 in the UK, US and Latin America, with rights sold in 33 countries in total.

Perhaps ironically, given how critics rave about her ability to convincingly tell the story of a school crush, and teen friendships, she describes herself as ‘aromantic and asexual’ meaning that she doesn’t have significant sexual of romantic feelings for others. 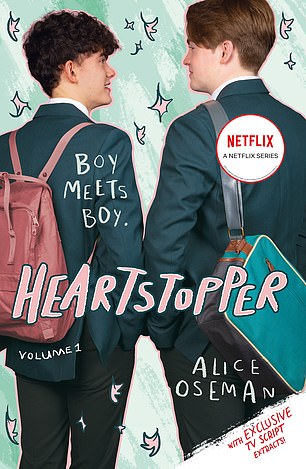 The reason is the phenomenon of the Heartstopper graphic novels

Alice Oseman grew up in suburban Rochester, Kent. Mum Trudi worked at a nursery and later for the University of Kent. Father Matthew is a digital engineer and leads a team at offices in nearby Dartford.

She was a straight A student and had a passion for writing – spending hours in her bedroom tapping out stories on her laptop.

What drove her was a desire to blow up the ‘lazy’ tropes of young adult fiction, and to explain to adults what their teens were going through.

In an interview when she was 19 she said: ‘When teenagers have these feelings of loneliness and melancholy, they’re like: ‘Oh yeah, that’s just a teenage thing.’ It’s not. That’s just undermining the way they’re feeling. The word angst implies that the emotions aren’t legitimate.’

She added that she wrote Solitaire to satisfy herself, telling The Times: ‘I just really wanted to get across the mood of my peers. I’d read a lot of coming-of-age books; hadn’t found anything that represented the people around me: everyone’s a bit bored.

‘At the same time I was very influenced by social networking: the internet was a place where people were able to express their innermost feelings, tell their darkest stories. It showed me a whole other side to my peers. That’s what (the heroine) Tori discovers, that everyone is as melancholy on the inside.

‘I really wanted a proper female coming-of-age story. I hadn’t found very many. I hadn’t really found anything then: they were either issue books about some specific problem, like the girl got bulimia or something, or all-about-boys books. It seemed to be one or the other.

‘Now I know there are some out there. At the time I was like: ‘Oh I’ll just write my own.’

She started writing Solitaire in the summer term of year 12 and finished it over the summer holidays. After receiving her results – all and A stars – and accepting a place at Durham University, she sent off the manuscript to agents. 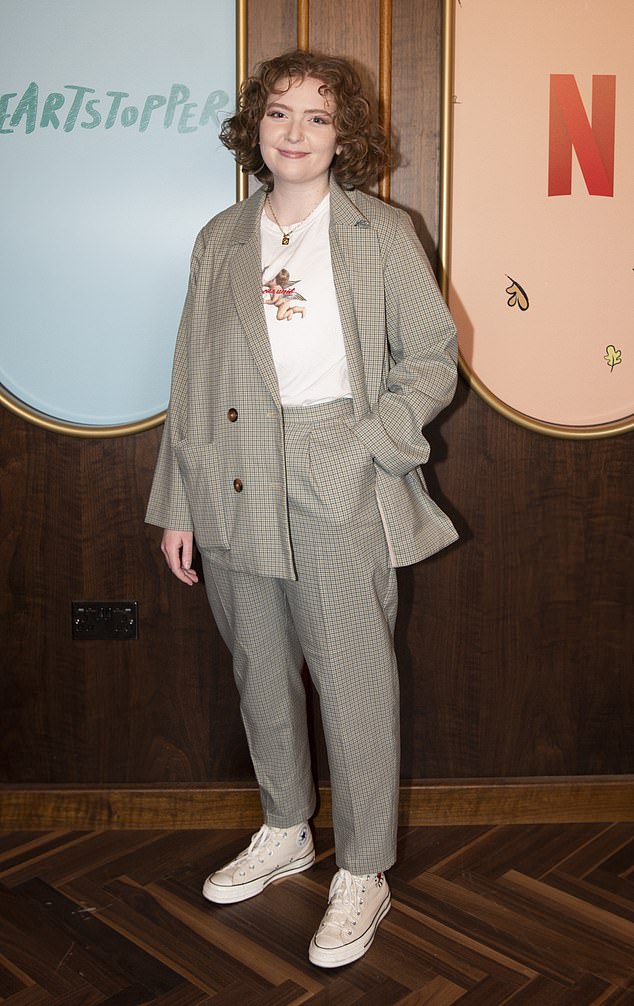 Alice Oseman grew up in suburban Rochester, Kent. Mum Trudi worked at a nursery and later for the University of Kent. Father Matthew is a digital engineer and leads a team at offices in nearby Dartford

The book, about cynical teen Tori Spring, was snapped up. She spent her years at Durham quietly writing the follow up, Radio Silence and has explained that she didn’t enjoy the course at all, and found it hard to make friends.

She said: ‘I didn’t enjoy the course, I didn’t enjoy the social aspect of it – I didn’t find many people I felt like I could be really good friends with.’ She kept her success as a novelist largely to herself. ‘It always felt like quite a private thing I was doing and I didn’t really like talking about it to other people.’

In another interview she said: ‘I was a really high achiever at school, so my teachers all wanted me to go to Oxbridge. I’d spent my whole life being praised for how academic I was, so I tried to get into Cambridge, but failed. I ended up at Durham studying English Literature and hated it. I didn’t care about anything I was reading, and struggled to connect with anyone on a deep level.’

She continued writing after university, and in 2016 decided to return to the story of Nick and Charlie, who were minor characters in her first novel Solitaire. She wanted to tell the ‘optimistic and joyful’ story of their romance.

‘I kept thinking about them and I just knew I wanted to tell their story. I basically just wanted to write it so that I could read it, but then people of all ages ended up enjoying it,’ she said. She aimed to draw a page a day – and shared them on free to read websites.

By the end of 2017 the book was finished and she raised £58,000 via crowd funding for a self-published edition. She posted the first 2,000 books out to purchasers herself.

In 2019, she sold the rights to See Saw films who took the project to Netflix. Oseman adapted the books, and was closely involved in the process.

She was keen for teenagers to play the screen teens. ‘There aren’t enough shows where teens are played by real teens,’ she said.

Actor Kit Connor, who played the young Elton John in Rocketman is rugby player Nick, while newcomer Joe Locke is Charlie. Charlie’s friend Elle is played by trans TikTok sensation Yasmin Finney in her TV debut – she’s since been cast in Dr Who.

She said: ‘Nick and Charlie are such important characters, not just to me but to so many people, and I knew if we didn’t find the right actors then the show just wouldn’t work. We saw SO many actors. We did an open audition search for Charlie and so many talented people turned up, but not many who I saw and just thought, you could be Charlie. It was probably because I have such a clear idea of who these characters are in my head, but eventually Kit and Joe just showed up – I have no idea how! It was very hard and we didn’t have many options, to be honest. We just got very lucky.’

In the books and TV series, Charlie and Nick encounter homophobia. Oseman said: ‘When I meet teenagers who have read my books, from some I get the impression they’ve had such a better experience being LGBT+ in school now, but for others it sounds exactly the same. I like to think overall things have got better, but it’s still not blissful amazingness everywhere.’

In the shows, Nick has to educate his peers and himself about being bisexual. Oseman, who identifies as queer, said: ‘That’s one thing bisexual and asexual people can totally relate to. Those are lesser known sexualities and you’re more likely to get questions when you come out.’

Her novel Loveless, published in 2020 is about a girl who has never had a crush on anybody but is determined to fall in love during her first year at Durham university.

There were obvious autobiographical elements for Oseman, who also identifies as asexual and aromantic. She told The Guardian this year: ‘asexual and aromantic people have barely any representation in anything’ and hopes that it will help people to understand a friend or family member better.

In another interview she said: ‘The story was really personal to me. It explores asexuality and aromanticism – which is what I am. I’m an asexual aromantic. It was kind of a coming-out journey, a deep dive into something that had affected me throughout my life.

‘Writing that story forced me to dig up some dark personal feelings, which is not really what you want to sit down at your desk to do every day.’

She added: ‘I think I use my books as therapy. Radio Silence has a demisexual character, who I really identified with at the time – that was my first exploration of those feelings. And looking back at Solitaire, the main character Tori heavily reads as being asexual.

‘That wasn’t intentional – I didn’t even know what asexuality was. As a creative person, writing is how I explore things that affect me.’

She’s believed to have now finished the eighth and final Heartstopper book, and is now contemplating her next move.

She may move away from ‘YA’ or young adult fiction. She said: ‘I do feel drawn to writing about older characters now – because I have grown up. But I don’t know what that would be yet.’

Tiny London flat could be yours for £1,250 – and it will be a squeeze to get into bed at night | The Sun