A solution to Western Australia's future port needs that alleviates the traffic woes facing residents on Leach Highway lies somewhere between the back of beyond and off in the never-never as successive governments spend millions of taxpayer dollars on partisan policies.

In the past 30 years, Labor and Liberal governments have been more effective at constructing an endless policy roundabout than they have been at developing a solution to the logistical and traffic issues plaguing Fremantle Port and Perth's southern suburbs. 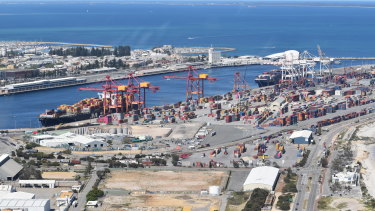 The 2017-18 budget papers show $78.9 million was spent on the Liberals' Roe 8 extension, between Stock Road and Kwinana Freeway, before Labor pulled the pin after the last election.

Premier Mark McGowan has committed this year to spend $97.3 million on planning, including environmental studies, to pursue the business case for an outer harbour but the Greens say there is no way it will be able to be built without bipartisan support.

Heading into the 2021 state election and the Liberal Party, which is struggling to find its way up from rock bottom, has dusted off the $1.9 billion Perth Freight Link as its major infrastructure centrepiece.

The road, which was eventually meant to connect to the Fremantle Port and take 500 trucks a year off Leach Highway, was one of the most prominent issues at the 2017 election outside of the public malaise surrounding former premier Colin Barnett.

Mr McGowan seized the mantle of premier with the promise he would tear up construction contracts for the Roe 8 extension while committing $20 million to get work started on an outer harbour solution, which would eliminate the need for the road by taking port operations out of Fremantle.

Labor teamed up with the Greens and environmentalists to fight against the Perth Freight Link, which would have impacted Beeliar wetlands and the Carnaby's cockatoo habitat, but now those same allies and the Liberals are set to push back just as hard on the proposal to build a $4.7 billion port in Cockburn Sound.

A report from a taskforce set up by Labor – Westport – was released in August and concluded a new harbour should be built in Kwinana with all container operations to be based from the facility by 2032, or over a gradual period so Fremantle Port would continue to operate into the 2040s.

Greens port spokesman Brad Pettitt, also an upper house candidate for the election and the current Fremantle mayor, has been critical of the report, claiming it used exaggerated projection figures around growth to justify a predetermined outcome.

"There is also a view that container trade may have peaked as items get smaller and as our trade with China is less certain," he said.

"Trade growth won’t grow as fast as it has over the last decade."

In the short-term, container trade at Fremantle Port has been forecast to decline by 9.9 per cent in 2020-21 because of uncertainty around how trade would rebound off the back of the COVID-19 pandemic.

The Westport report had a forecast demand of 3.8 million standard containers annually by 2068.

Fremantle harbour should be able to handle up to 2.1 million containers, according to the report, but can only deal with as much as 1.2 million due to road and rail constraints with capacity to be reached in the mid-2030s.

A Kwinana port, however, could handle 4.5 million containers, but the report did not factor in the Perth Freight Link to any of its modelling.

Dr Pettitt told WAtoday both the freight link and the current outer harbour plan had no future.

"They both require bipartisan support to be able to happen," he said.

"At some point the port is going to need to outgrow Freo and at least part of it will need to go to Kwinana or another location. But it’s going to need more support than one party to do that.

"There is no way the ALP can build an outer harbour. 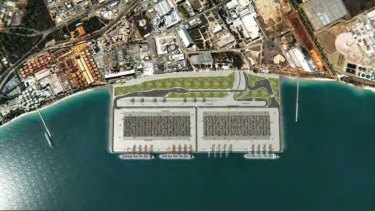 Preliminary designs for a new outer port in Cockburn Sound.

Instead, the opposition claims it will have the tenders out for Roe 8 within 100 days of being elected into government.

Thanks to upper house blockages, Labor and the Greens were unable to remove Roe 8 from the metropolitan region scheme but were able to stymie any further attempts by a Liberal government to bring back the development by turning some of the future road areas into A-class nature reserves.

The lack of support from federal Labor for the Perth Freight Link also means the Liberal Party would need to be running both the WA and Australian governments to get the road project funded.

At the other end of the spectrum, without the Greens, Labor will need cross-bench support from elsewhere or to win enough seats in its own right to command a majority in the upper house.

Mr McGowan's popularity out of his government's response to the COVID-19 pandemic provides as good a chance for control of both houses but the electoral system, which gives greater weight to regional areas than any other state or territory, remains the biggest barrier to an all-Labor scenario.

The Liberal and National parties have traditionally held the majority in the upper house and without control of it, Labor will find it difficult to pass any associated legislation needed to progress the outer harbour. 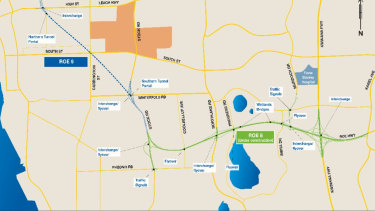 The original plans for Roe 8 and 9.

Getting the tick-off from the Environmental Protection Authority will be another challenge given the last time the agency looked in 2006 at putting a port in Cockburn Sound, which is the only known pink snapper spawning ground between Kalbarri and Augusta, it found all options at the time would have "significant environmental impacts".

Mr McGowan, who was the Environment Minister when the EPA completed its desktop review, said his government would ensure the highest environmental standards would be put in place.

"I think WA needs policies that cater for the long term. Short-term thinking needs to stop. Long-term thinking is what we need in this day and age.

"Our plan is about ensuring we have a port that can cope with the growth in container trade and we get the trucks out of the inner-city."

Any chance of success in building the port could be incumbent on Labor winning a third term in 2025 and getting enough of the project under way that subsequent governments have no choice but to follow through.

If not, it looms as another expensive exercise in planning for major infrastructure projects that never get built.

Without bipartisan support the plan could be dead in the water unless Labor can secure multiple terms and upper house control.

June 9 – On this day: The Queen opens the new Gatwick Airport!